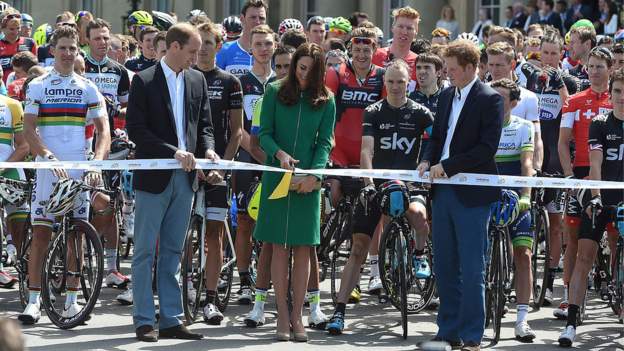 The UK is to bid to host the 2026 Tour de France Grand Depart.

The government has also confirmed funding for the English Rugby Football Union’s bid to host the 2025 World Cup, as the RFU plans to stage the “best-attended women’s Rugby World Cup ever”.

Chancellor of the Exchequer Rishi Sunak will this week announce £30m funding to back both bids.

“I’m excited at the prospect of bringing more world-class sporting events to the UK,” Sunak said.

The chancellor is expected to announce the bids on Wednesday, in a move he says is intended to boost British sport and enhance investment across the UK.

“That’s why I’m backing these bids,” he added. “Our bids will include events taking place across the country and I’m hopeful everyone will get a chance to cheer on their sporting heroes.”

The last Grand Depart in the UK was in Leeds in 2014, followed by stages finishing in Sheffield and London. The UK’s first Grand Depart was in London in 2007.

The Grand Depart usually alternates between cities in France and cities in other countries, with the first two to four stages taking place in that country before the race moves to France.

France has hosted the last two Grands Depart, with the 2021 start moved to Brittany because of the Covid-19 pandemic. Danish capital Copenhagen will host the 2022 start, with Spanish city Bilbao set for 2023.

The aim is for the UK Grand Depart to include stages in England, Scotland and Wales, with 95% of the investment coming outside south-east England.

Culture Secretary Nadine Dorries added: “We are backing both ambitious bids with funding because they will give people the chance to see world-class sport on home soil and hosting such prestigious events will boost local economies, jobs and opportunities.”

The budget will also provide a further £11m for the UK and Republic of Ireland’s bid to host the 2030 World Cup.

Despite England receiving a one-match stadium ban following unrest at Wembley during the Euro 2020 final, the government has insisted that the 2030 World Cup bid is “very strong”.