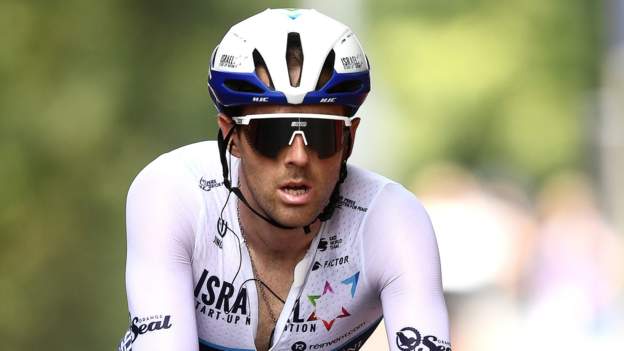 Dowsett held the record for a month in 2015 before fellow Briton Sir Bradley Wiggins bettered his mark.

“There were three targets coming into this, the first was to break the record,” said Dowsett.

The Israel Start-Up Nation rider added: “I want to take the opportunity to say another well done to Victor and to Dan [Bigham, British record holder] because there was a British and a world record up for grabs today and I was a bit shy with both of them.

“But today was a success because the other two targets were to see how far I can go and 54.555 is as far as I can go.

“We chucked everything at this. Both Chanel [his partner] and the small team around us, who’ve done a lot of work to get to here.

“I’m proud of the distance I managed to cover today.”

Having started strongly, Dowsett began to drop around the 20-minute mark and was unable to claw back the time as he finished over 500m short of Campenaerts’ mark at Velodromo Bicentenario in Aguascalientes, Mexico, the scene of the Belgian’s success in 2019.

Dowsett has severe haemophilia A, a type of blood clotting disorder, and was riding to raise money for his charity Little Bleeders and The Haemophilia Society.

He is the only known elite sportsperson with the condition to compete in an able-bodied field.

“The last target today was the awareness we’ve brought to haemophilia and to rare diseases, and the message we’ve sent out before the start gun went today,” said the former British time trial champion.

“The overriding message for anyone with haemophilia, or anyone with a rare condition or facing adversity, is to just give it a shot, because the biggest failure today would have been to not be here.”