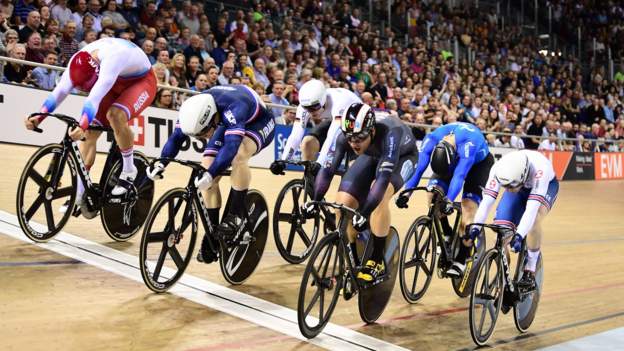 What sport is Britain best at? Football? Motor racing? Dressage?

Perhaps, but you can’t get much more dominant across the past decade or more than GB’s cyclists in the velodrome.

Countless Olympic golds and World Championship rainbow jerseys have been won by now-household names, such as Victoria Pendleton, Chris Hoy, and Laura and Jason Kenny.

But beyond an Olympics, how many of us would trot down to the nearest indoor velodrome – there are six in the UK, including the National Cycling Centre in Manchester, Lea Valley in London and a beautiful new track in Derby – to enjoy some serious keirin over a beer and a bag of dry roasted nuts?

The new track cycling Champions League aims to change that. It has a glitzy format with light shows, music, cool kits, and gladiators going at it at speeds of up to 60mph, all fighting for prize money of about £40,000.

“It feels like an open goal. I can’t believe it has taken this long,” says six-time Olympic gold medallist and Champions League ambassador Chris Hoy. “I’m really genuinely excited, I only wish I was still racing to be a part of it.”

The fans’ and bookies’ favourite?

Track cycling has been extremely popular before, and not just in cycling heartlands such as France and Belgium, where pretty much everything is done on two wheels.

But in America too? In the late nineteenth century? At Madison Square Garden, long before Muhammad Ali and the New York Knicks were even a thing?

It’s true – thousands used to gather to watch men pound the boards, jostling for position in sprints and endurance challenges.

And in Japan today there are more than 40 velodromes, with the keirin sprint format more popular than horse racing for keen gamblers.

But, will it work at a larger scale in a continent that can’t get enough of football, alongside all the other sports that try to draw our attention?

“Hopefully fans will get to know the athletes, get to see them,” says Hoy. “They don’t just see them once every four years and disappear off your screen – you really grow a fanbase.”

Four events have been picked from the races we see in the Olympics for the world’s top riders to compete in. They will qualify via other meetings, such as the recent World Championships in France, and through invites.

The keirin and sprint races will have the best sprinters in the world, such as GB’s Sophie Capewell and the Netherlands’ Jeffrey Hoogland.

The endurance events selected are the scratch and elimination races, in which riders such as GB’s Katie Archibald and Ed Clancy excel.

“I was so excited when I first heard about it,” says Archibald. “It will provide a chance to test myself against the best of the best and to travel and race all over Europe – I can’t wait.”

There are five events, beginning in Palma, Mallorca on 6 November and ending in Tel Aviv, Israel, on 11 December.

“The riders like it,” says Hoy. “They were so excited, contacting me asking to be involved. There’s a genuine buzz.

“Points are important, as is the prize money. Track cycling has always been the poor relation compared to road cycling – not so much sprint [in which six-time Olympic champions Hoy excelled], but this is a chance if you’re an endurance track cyclist, male or female.

“There’s equal prize money, so you can make a living out of it if you’re one of the best. And with the commitment these riders have, they should be getting rewarded.”