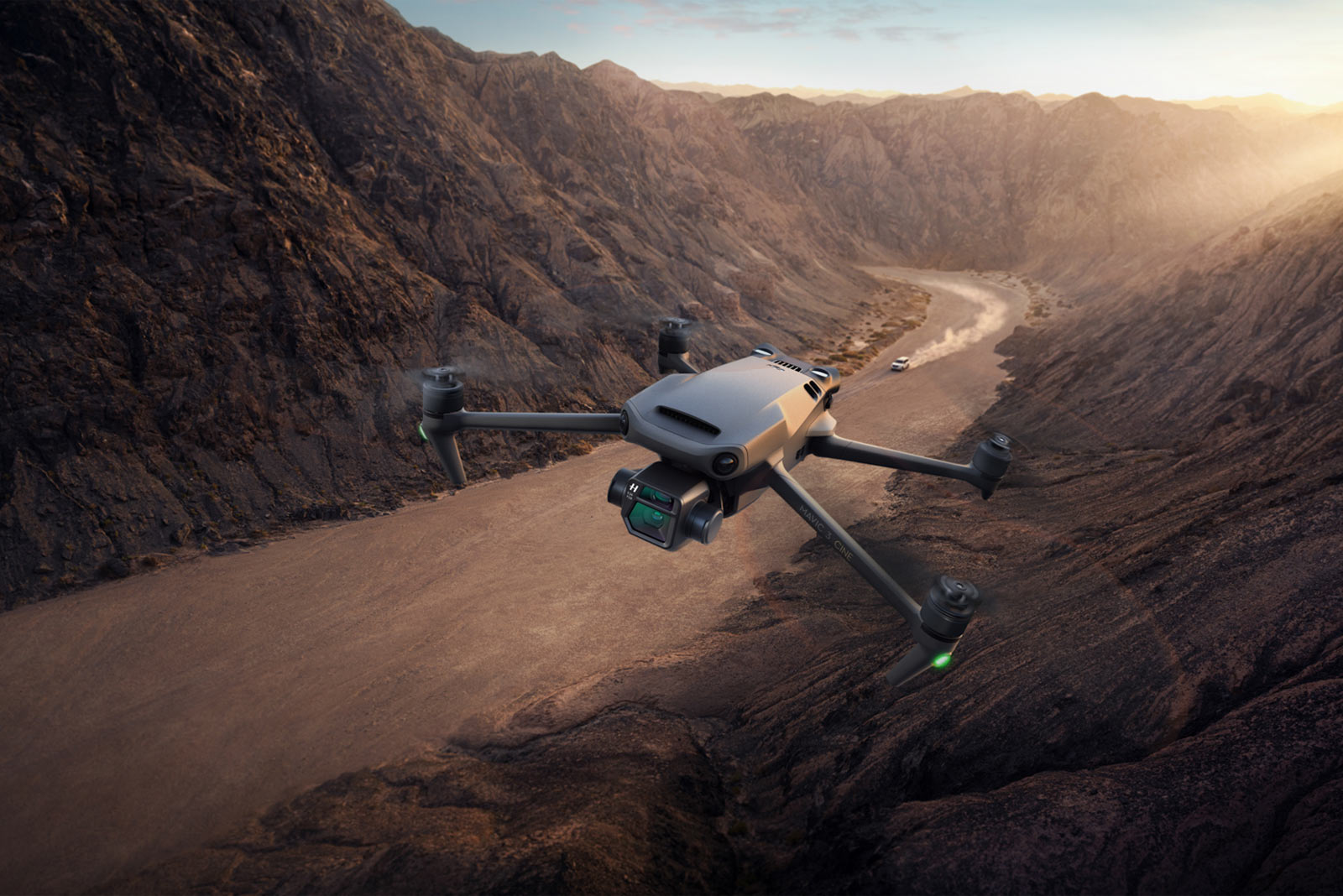 The all-new DJI Mavic 3 drone goes heavy on camera specs to create a flying filter that should give creators unprecedented video quality and options, including Apple ProRes 422 video capture.

But there’s more to it than that, with a new omnidirectional array of obstacle sensors for flying-through-a-forest levels of obstacle avoidance, longer battery life, faster top speed, better subject tracking, improved GPS positioning, and more. 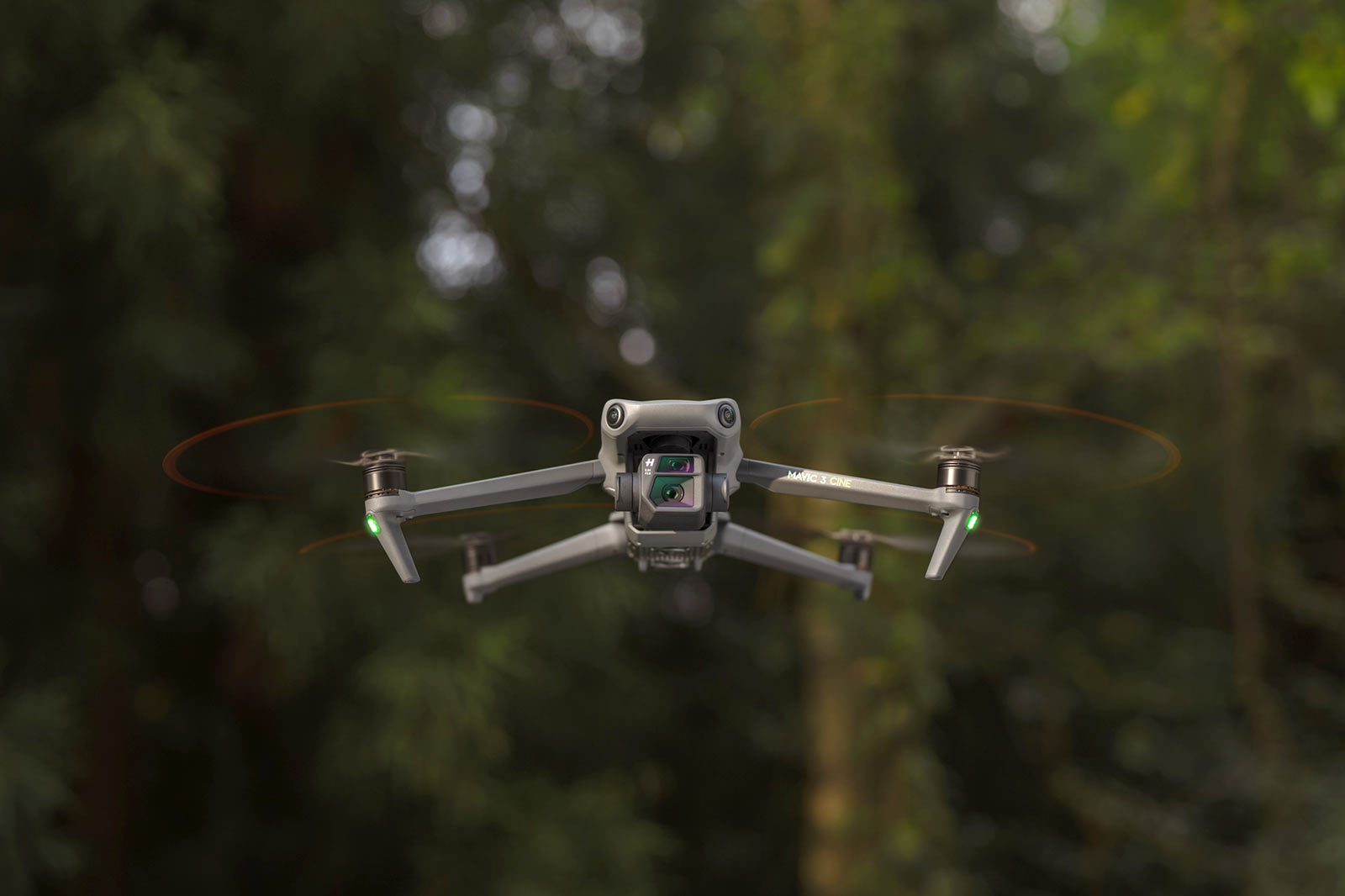 Creators are going to geek out on the camera specs listed below, but without a great drone body, the best camera in the world won’t keep up with the action. To keep the lens pointing where it should, for as long as possible, DJI made a few key upgrades to the Mavic 3.

A higher capacity battery and more efficient propellers give the Mavic 3 up to 46 minutes of flight time. Improved aerodynamics help, too, reducing drag in flight to preserve energy, but also to help it get where it needs to go faster. Top speed increases slightly to 21m/s,  which is about 76km/h, or 47mph!

And it’ll go far, with OcuSync O3+ allowing up to 15km of transmission range while delivering a high framerate 1080p 60fps live video feed to the remote control or app. This helps you better control the drone and frame the shot. 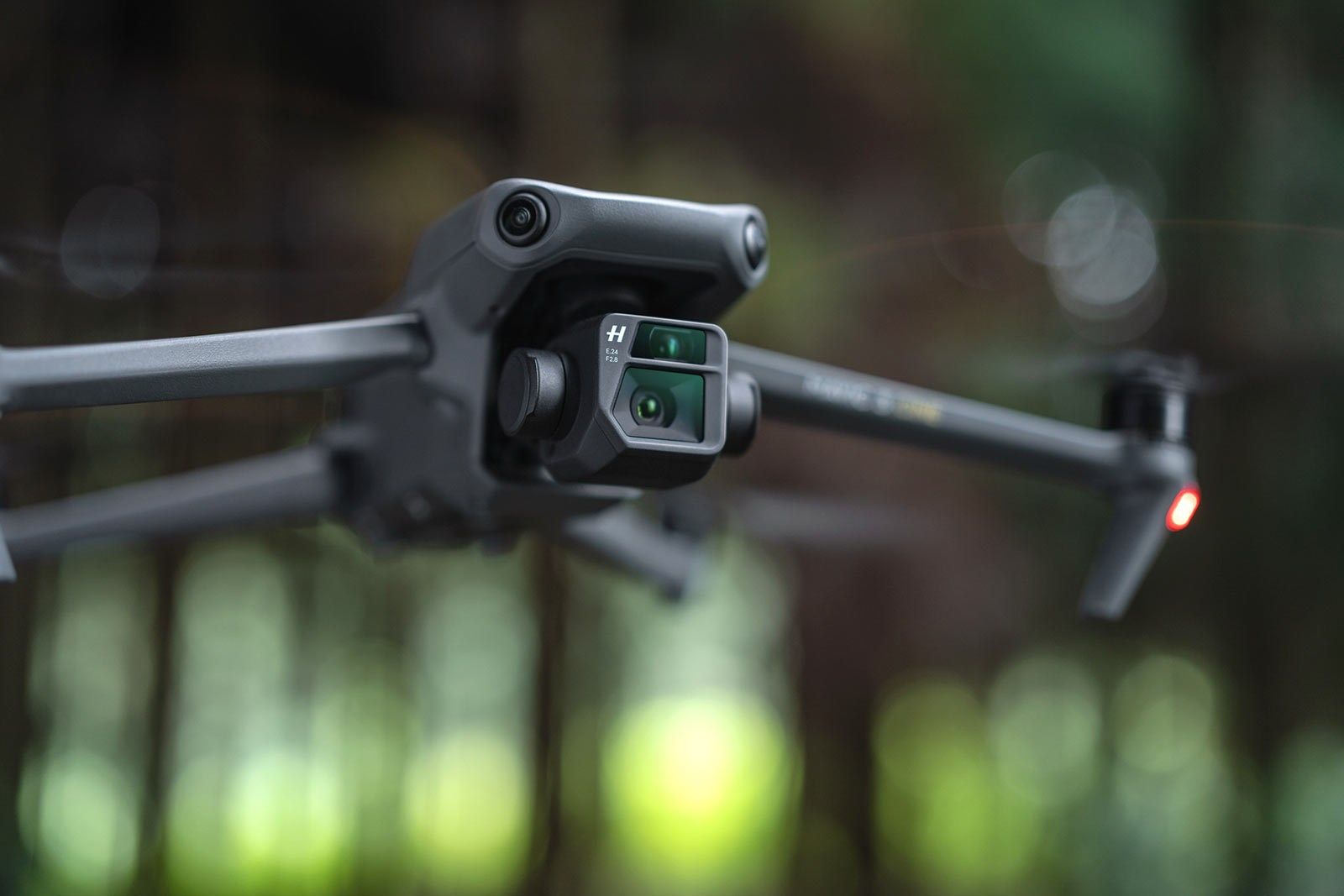 The Omnidirectional Obstacle Avoidance system uses six fisheye sensors and two wide-angle sensors to keep it from running into anything. This means we should be able to finally have it follow us through the woods while mountain biking via the ActiveTrack 5.0 mode…and that’s because this new mode uses both the video camera and the sensor array to keep track of subjects.

By combining efforts from the camera and sensors, DJI says the Mavic 3 can follow a subject even as they turn, dip, or rise, all while avoiding things like trees. That’s a massive improvement from the simple toward/away and side-scrolling follow functions on prior models. They say it can even keep track of a subject if it leaves the frame and reorient to get them back on screen without losing its tracking.

That said, ActiveTrack 5.0 will come with a firmware update coming in January 2022. The maximum forward detection distance is 200m, giving it a long runway to see what’s coming up and also keep the subject in view even if the camera loses them.

The other proximity sensors’ detection range is 10m up, 16m rear, 18m down, and 25m to either side. The propeller guard does not affect their sensitivity or function.

While they won’t comment or compare to what Skydio claims their drone can do when following a subject, they are saying that it pulls on all of their enterprise drone technology and vast drone experience, and that we’re likely going to be very impressed. 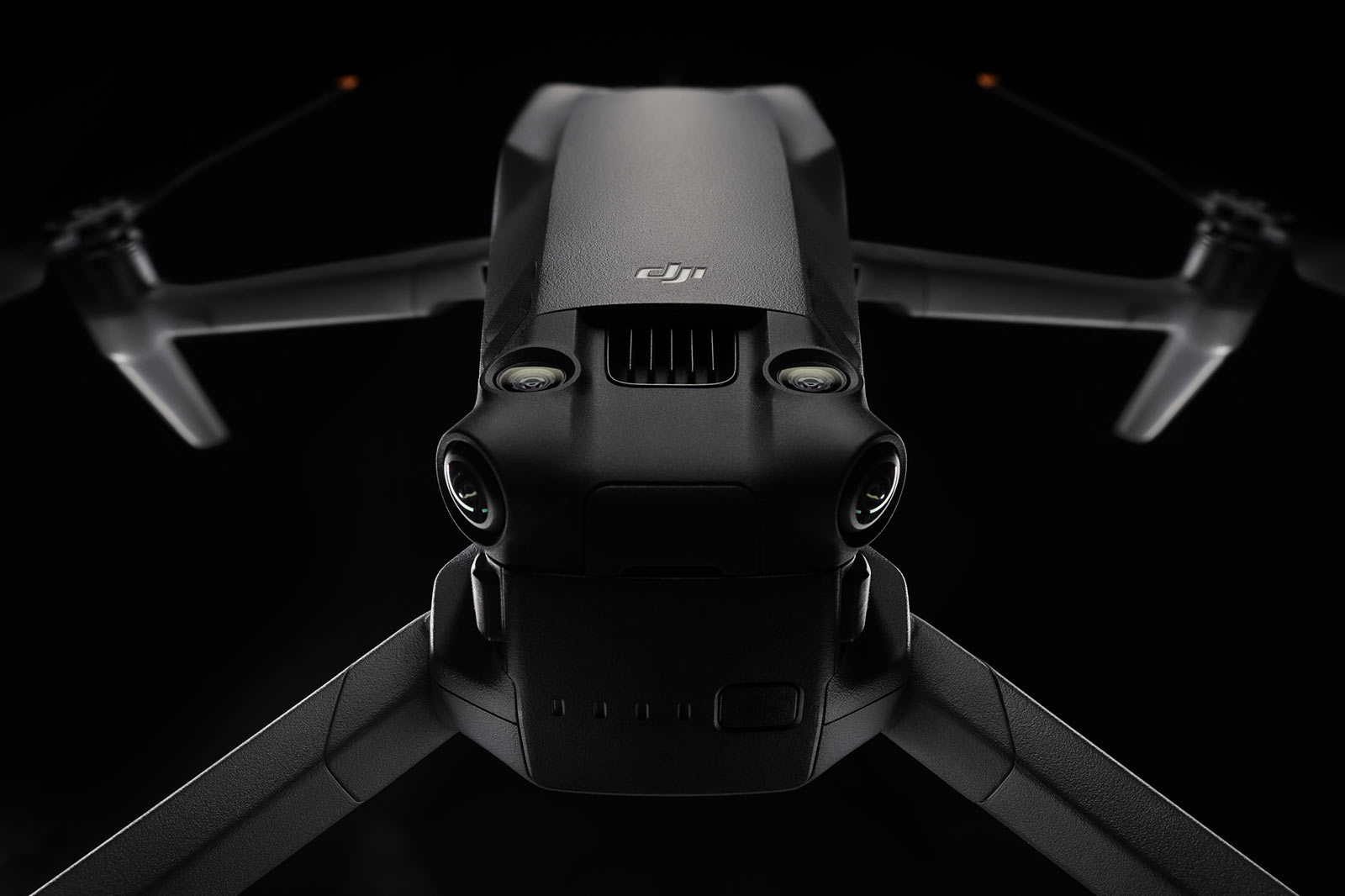 For long static shots (timelapse, long exposures, or just filming you standing around talking), and a better RTH (Return To Home) feature, they’ve bundled GPS, GLONASS, AND BeiDou satellite receivers inside. By using signals from any combination of the three networks, the Mavic 3 can remain more stable while hovering, and pick up its position much more quickly.

The RTH function gets better than ever, now calculating wind conditions and the shortest path back to its starting point to give you more flight time before it automatically comes back when battery levels get critically low. It’ll also fly back if it loses the signal from the remote, so you don’t lose your drone. 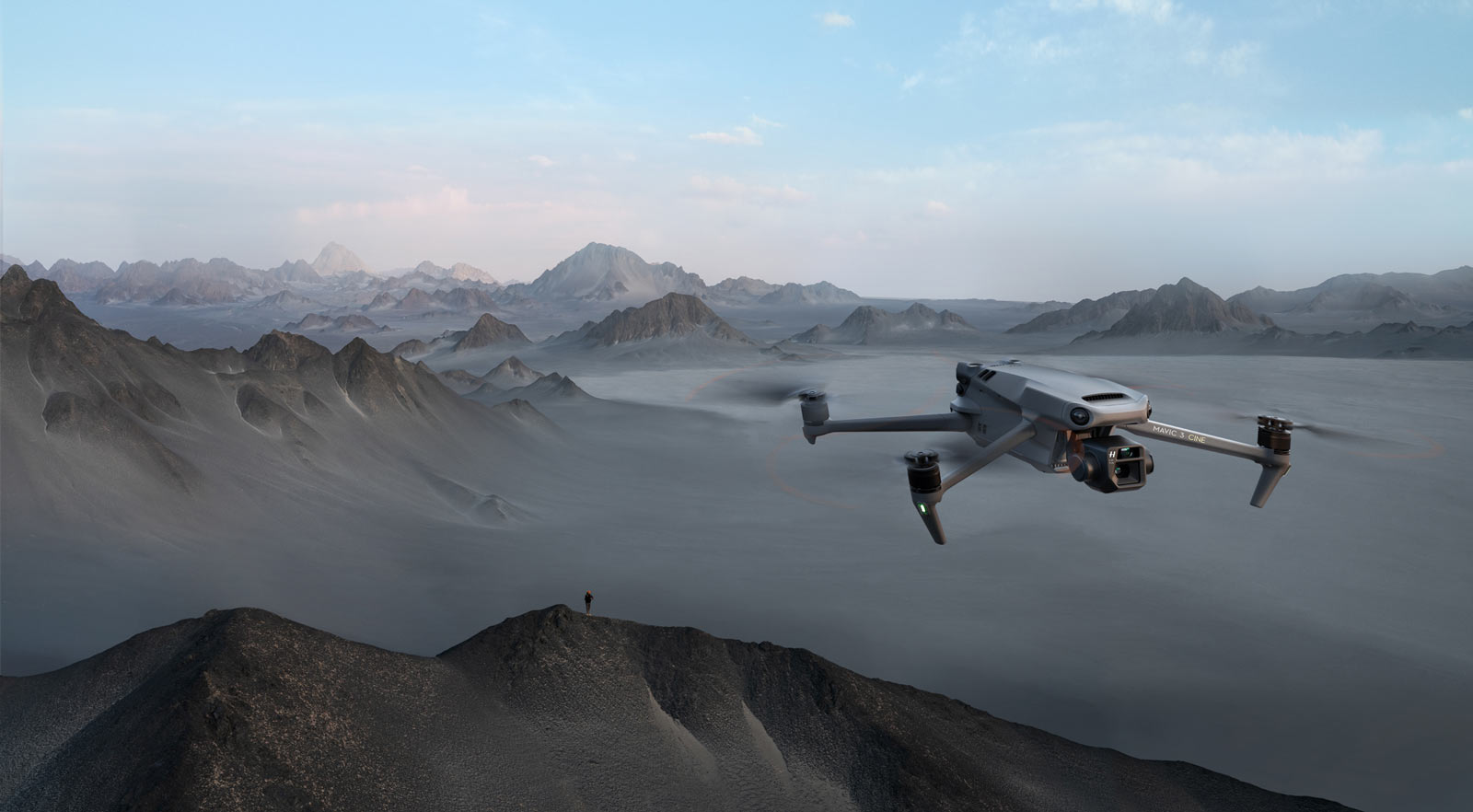 Weight is 895-899g, which does put it into a class that will eventually require a registration, and fortunately DJI has built-in the necessary Remote ID system that will be mandatory in a couple of years. They’ve also built in geofencing with the app and remote to alert pilots when they’re nearing banned airspace, and automatically limit altitude where required.

First thing you should know: There are TWO cameras on the Mavic 3 – the 4/3 CMOS Hasselblad primary camera, and a telephoto hybrid 28x zoom lens that lets you see a bit further ahead.

And, there are TWO versions of that system, Standard and Cine. They share all of the same drone and flight specs, and the following specs are common between both models:

The Tele lens is capable of shooting stills and video, too, at a slightly lower video quality, but seems mostly intended for scoping out areas from a distance before flying in for a closer look. 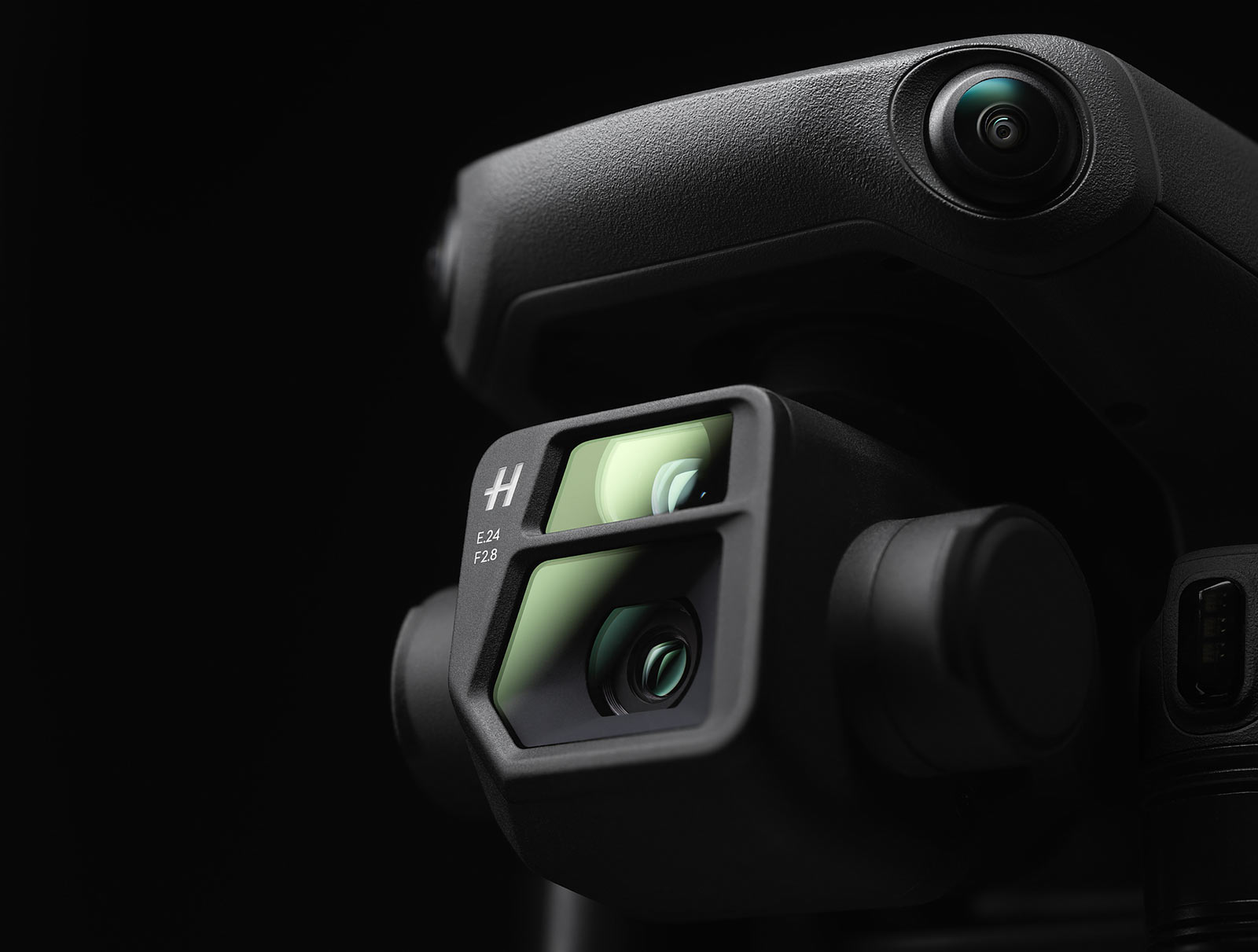 The biggest difference is that the Cine version upgrades the processor to capture much larger, uncompressed Apple ProRes 422 HQ video files. As such, it comes with a built-in 1TB SSD drive, and it includes the Pro controller instead of the standard one. By comparison, the Standard model has 8GB of built in storage, but you can add a MicroSD card to expand capacity.

The 120fps and 200fps settings will be enabled with a future firmware update coming soon after launch. All models come with high-speed 10Gbps cables and use the latest WiFI 6 protocol to give you faster video file offloads, whether plugged into your computer or wirelessly. 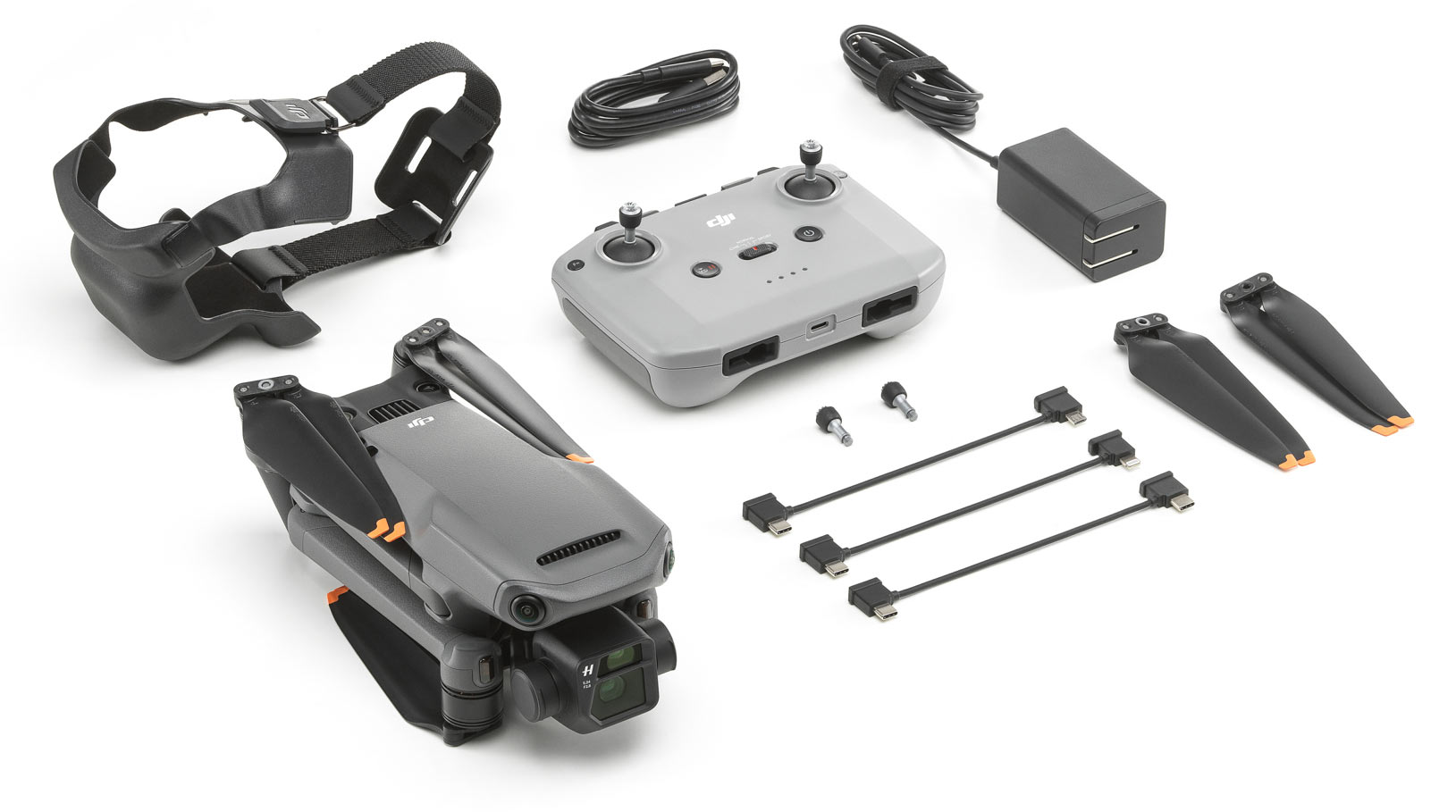 The Mavic 3 Standard kit ($2,199) includes the drone, controller, wall charger, one battery, a carrying strap, one extra pair of propellers, and adapter cables to connect your phone to the remote. Your phone, running the DJI app, acts as the screen showing you what the drone sees and its current camera settings. 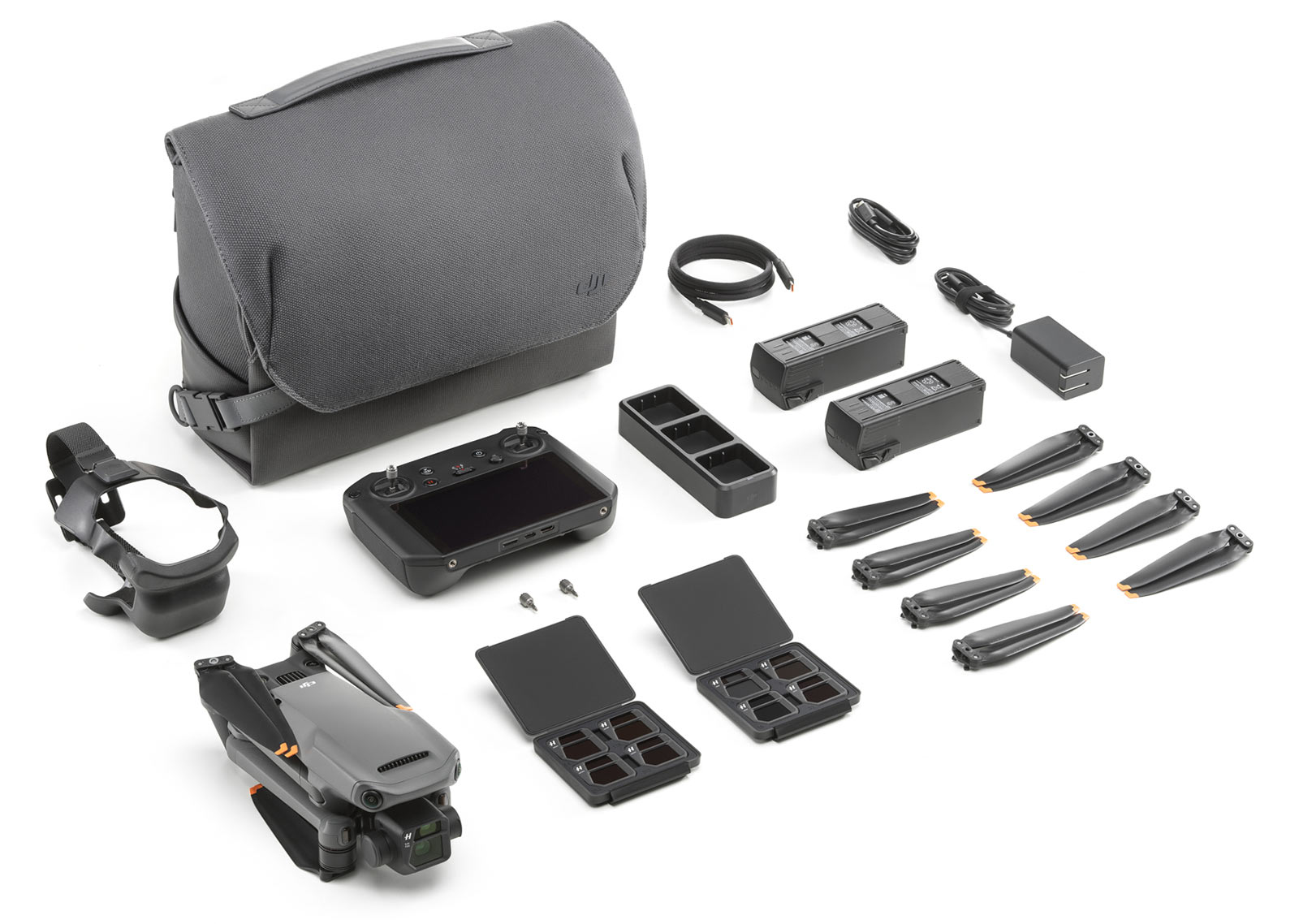 The only way to get the Cine model is with the Cine Premium Combo, which retails for a steep $4,999. But, remember, it has a built-in 1T SSD, and it includes the Pro remote with built-in screen (so you don’t need to attach your phone), includes both ND filter sets, tons of spare propellers, two extra batteries plus charging cradle, and the carrying case.

A propeller guard is available separately, as are… 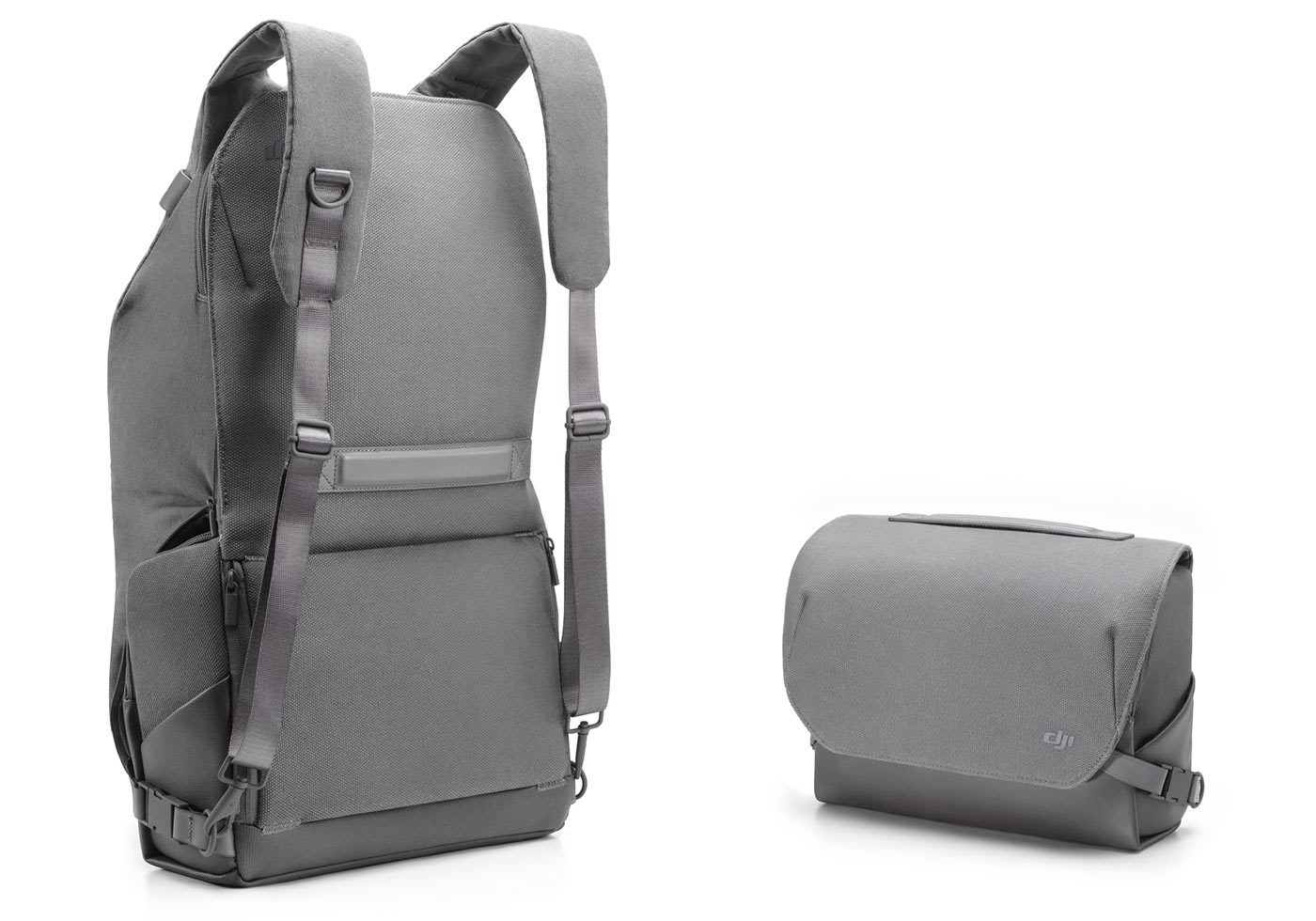 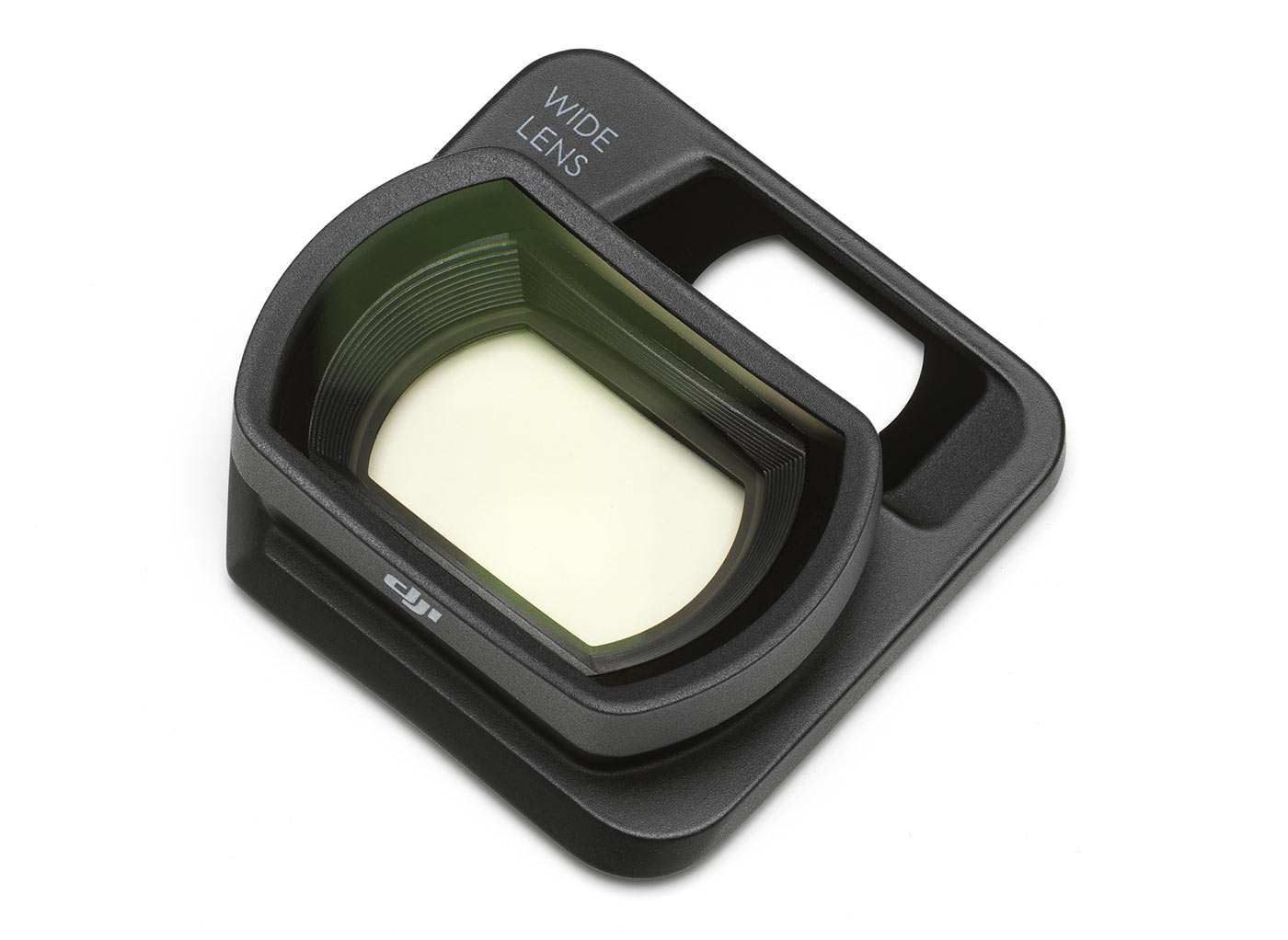 All three models should be available at launch on November 5, 2021. Pricing for accessories TBA.