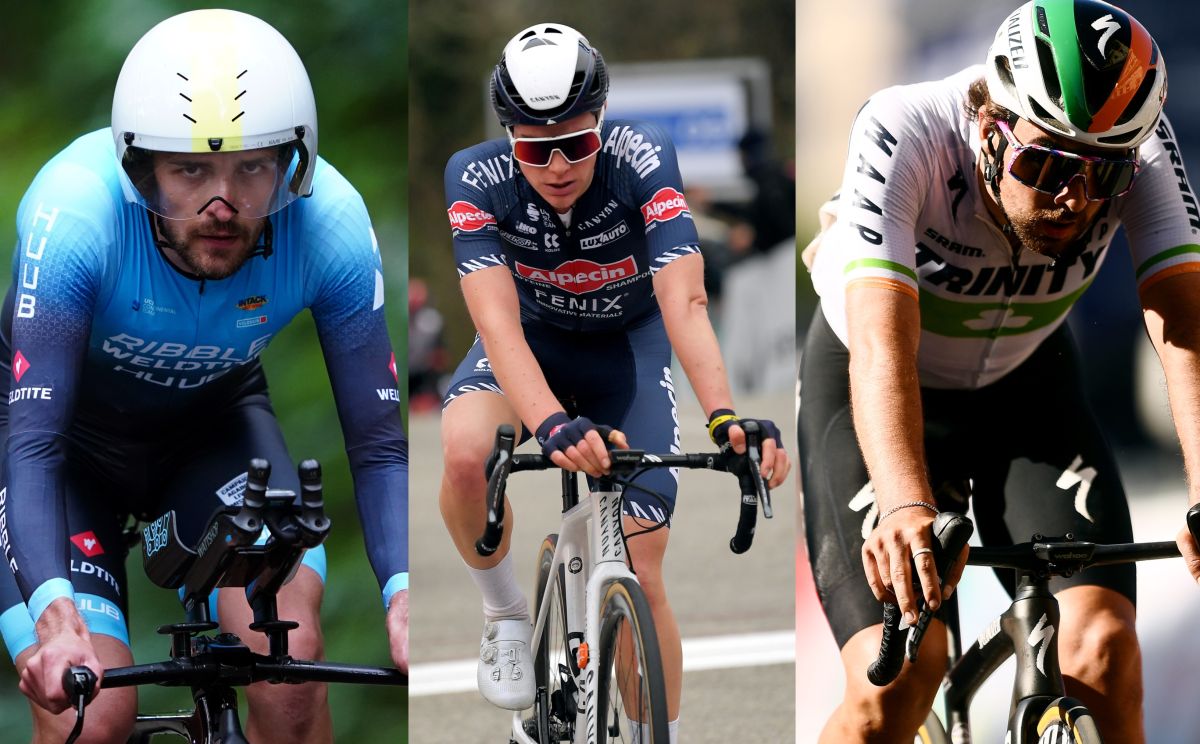 Teams in the WorldTour have almost completed their rosters for the 2022 season with a good list of British and Irish riders stepping up to the top level of the sport.

At the moment there are six male riders who will be stepping up from ProTeam and Continental level to join the big teams with one or two more potentially on the cards.

In the women’s peloton it very much depends on whether the new Scandinavian team Uno-X Pro Cycling get a WorldTour licence. That would see three Brits sign for them, two of which would be making the step up to WorldTour. They are World Hour Record holder Joss Lowden and multiple Olympic and world track medallist Elinor Barker.

>>> Seven-day wonder: How Josh Quigley set the record for the most miles in a week

Here are the British and Irish riders currently down as joining the WorldTour in 2022:

It has been quite the season for James Shaw and after three years away from the sport’s top division. The 25-year-old is making his way back to the top with EF Education-Nippo for 2022, joining Brits like Hugh Carthy, Owain Doull and Simon Carr.

His team, Ribble-Weldtite, has made it to more races giving him more opportunities including a fifth place overall and three stage top sixes at the Tour of Slovenia behind winner Tadej Pogačar (UAE Team Emirates), as well as fifth overall in the Tour of Norway and two stage top 10s.

Shaw also performed well at the Tour of Britain; he didn’t manage a top 10 in the overall, but a fifth, eighth, 11th and 12th went his way in four of the stages. Third and ninth in the Nationals went his way too. An exciting rider.

Ben Tulett has quickly shown himself to be possibly one of the next best punchy climbers after exploding onto the scene in the last two seasons with Belgian ProTeam, Alpecin-Fenix.

With excellent performances at races like the Tour of Poland, where he finished ninth overall, as well as 12th at La Flèche Wallonne and eighth at Coppa Agostini, the 20-year-old Brit is set to join the ranks of Ineos Grenadiers as one of the many new young talents at the team.

With the ability he has shown on some of the WorldTour’s toughest climbs against some of the best riders in the world, Tulett will be hoping riding for Ineos can develop him into the next big climbing star to come out of Britain.

The former Irish road race champion Ben Healy is set to take the big step from development team to the WorldTour as he changes the strip of Trinity Racing to EF Education-Nippo in 2022.

Healy, who won the Irish road race title in 2020, has had an exceptional few seasons in the under 23 ranks as well as a few strong showings in the pro races too including a brave breakaway effort in the Tour of Britain.

But stage wins in the Tour de l’Avenir, U23 Giro d’Italia and the Ronde de l’Isard show that this 21-year-old from Kingswinford has a lot of promise. Not to mention top 10s in both national time trial and road races this year.

Multi-talented rider Ethan Vernon is all set to make the big jump to join one of the most successful WorldTour teams of Deceuninck – Quick-Step, or as it will be known in 2022, Quick-Step Alpha Vinyl.

This is a surprising move though, Vernon hasn’t been prolific by any means, but clearly team boss Patrick Lefevere has seen something in him.

This move is not surprising at all, Lewis Askey has basically been a WorldTour rider this season anyway for Groupama-FDJ as the 20-year-old from Cannock has featured in multiple races for the main team.

Officially joining them after proving himself in Groupama’s development team, as well as the WorldTour team, Askey joins Jake Stewart as two talented young British riders in the French squad.

Askey has had a great year, despite not taking a win. Askey has shown amazing ability and strength on the bike to see him help his team in races like Le Samyn, Tro Bro Leon and Scheldeprijs, to having his own chances in Tour Alsace, Paris-Tours Espoirs and A Travers les Hauts de France.

Fifth place at the U23 Worlds road race showed his amazing potential on all-terrain, he also took third, fourth and fifth in the British national circuit race, time trial and road race.

Moulded in the same way as soon-to-be team-mate, Tom Pidcock, 22-year-old Ben Turner is a superb cyclocross rider but also a very exciting talent on the road too.

Turner has shown himself to be one of the finest sprinters on the U23 scene before a horrendous crash saw him abandon the Tour de Avenir. Before then he took multiple top 10s in Tour Alsace, U23 Giro and the Tour d’Eure-et-Loir.

Since the crash he has returned to racing with a good showing at the Ronde de l’Isard before taking second place in the U23 national time trial behind Leo Hayter (DSM Development). He went on to take 24th in the U23 road race and will now wait until December before lining up on the cyclocross field with the likes of Pidcock, Mathieu van der Poel (Alpecin-Fenix), and Wout van Aert (Jumbo-Visma).

It is not yet known if there are going to be more British and Irish riders joining the top division, but there is still plenty of time with the deadline on December 31. That being said, some teams have already finalised their rosters with Movistar Team confirming their team, without current British rider Gabriel Cullaigh.