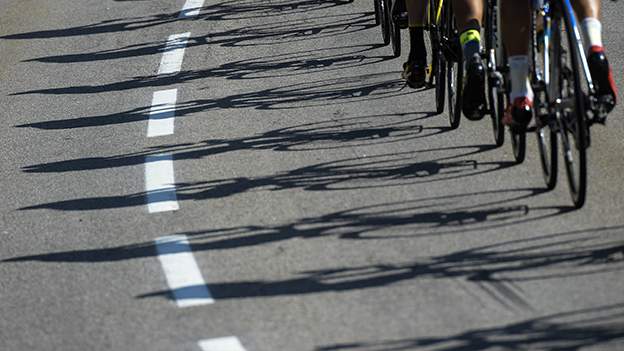 When Pfeiffer Georgi won the road race at the British National Championships in October it capped an extraordinary year for the cyclist. Less than 12 months earlier, the 21-year-old was having to learn how to walk again.

Georgi had broken two vertebrae in a crash in Belgium and spent months in recovery at home in Gloucestershire.

“That was quite a scary crash and the doctor said that I was quite lucky that I’d make a full recovery,” the 21-year-old told BBC Sport.

“I had a lot of physio just trying to get the strength back in my neck and being able to ride again, that took a few months.”

While crashing is an accepted part of professional cycling, it is easy to forget that the trauma can last long after wounds have healed.

“For me, it was more the mental aspect and gaining confidence back in the bunch because it could have been a lot worse, that crash, and that did shock me a bit. Just thinking, if I did crash again something worse could happen,” Georgi added.

“I worked a lot with a mindset coach, doing visualisation and small tips and tricks to realise that if I crash it’s not the worst-case scenario and trying to feel comfortable when the races do get a bit hectic.”

The second part of 2021 is when everything began to “click into place”.

Georgi won her first pro-level race at La Choralis Fourmies Feminine in France in September and then took the victory in Lincoln at the Nationals.

As well as the prize of being able to wear the British stripes on her jersey next year, Georgi adds her name to an illustrious list of winners including Lizzie Deignan, Nicole Cooke, Beryl Burton and Laura Kenny.

“When I won it was quite a shock because I really didn’t expect it,” Georgi said.

“I think just the realisation that I get to wear the stripes for the next year and always have the bands on your sleeves for the rest of your career – it’s something that not everyone gets to do. So to win it already, I definitely wasn’t expecting it but it feels pretty cool.”

2021 was Georgi’s third season as a professional rider but she said it felt more like her first.

She was still completing her A-Levels when she signed with German team Sunweb – now DSM – in 2019 and spent that first year combining studying and exams with racing around Europe.

“In the first part of the season I was flying out to Europe on the Saturday, then racing on the Sunday and flying home and then school on the Monday morning, so it felt quite busy,” Georgi added.

The Covid-19 pandemic stunted things further, restricting her to just 11 days of racing in 2020.

She said being able to race consistently from February through to October was a big contributor to her breakthrough year.

“I feel like I’ve learned so much. I remember some of my first races with the team I didn’t know anything – learning how to ride in the bunch, things about nutrition – in the races I wasn’t eating enough and then I would completely blow up,” she added.

“I think physically, as I’ve got older I think I’ve come on a long way since when I came straight out of junior (ranks).”

It’s in the DNA

Cycling is very much in Georgi’s genes. Her father Peter raced at Masters level and her mother, Louise, was an amateur rider, while her brother, Etienne, raced for Team Wiggins in 2017-18.

Georgi was born in Herne Hill, London, and was taken to the local velodrome as soon as she was old enough. When the family relocated west, racing at the Castle Combe circuit and spending the weekend on club rides became the norm.

It did not take long before Georgi was spotted by British Cycling. She was a prolific winner as a junior, racking up wins on the track and the road around the UK and Europe. Among them were victories in the prestigious junior Gent-Wevelgem and Trofeo Alfredo Binda.

One-day racing remains Georgi’s forte – anything with short, punchy climbs and cobbles. Add in rain and cold weather and she thrives even more.

It’s no wonder she performed so well at the Nationals, on a circuit that featured the cobbled climb of Michaelgate and on a day where the peloton was doused in rain.

“It was like a bit of a Belgian classic brought to Britain,” Georgi said.

“I think if I had to create my perfect race, that would be it; the cobbled climb, the weather. When I opened the curtains in the morning I was quite happy when I saw it was raining.”

All being well. Georgi hopes to make her debut in the Tour of Flanders next spring – a race she says she would “love to win one day”. Paris-Roubaix is now also on the calendar, as well as the small matter of the revival of the women’s Tour de France next July.

“I think having my first victory and also getting some good results just gives me the confidence that I can be competitive with the top women,” Georgi said.

“I’m looking forward to next year. It’s given me opportunities to take on more of a leader role within the team which I think’s really exciting. I didn’t expect to get this opportunity so soon.”