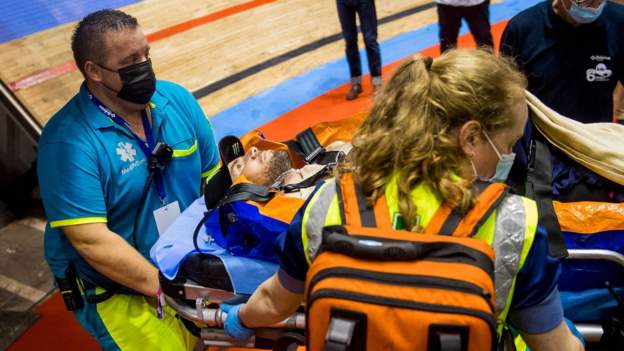 Mark Cavendish suffered two broken ribs and a collapsed lung in a crash at the Six Days of Ghent on Sunday.

The British cyclist was competing in the Madison when Olympic and world champion Lasse Norman Hansen crashed in front of him.

The 36-year-old then rode into the Dane’s bike, sending him crashing to the floor.

After initial treatment, Cavendish was able to walk but was then taken to hospital on a stretcher.

In a statement, Cavendish’s team Deceuninck – Quick-Step said: “Examinations showed that Mark has suffered two broken ribs on this left side and has a small pneumothorax [collapsed lung], both of which have been treated with medication. He has been kept in the hospital for observation.

“It is expected that Mark will be discharged either later today or tomorrow morning, and will then undergo a period of recuperation.”

On Sunday, Cavendish’s wife, Peta, said he was spending the night in intensive care.