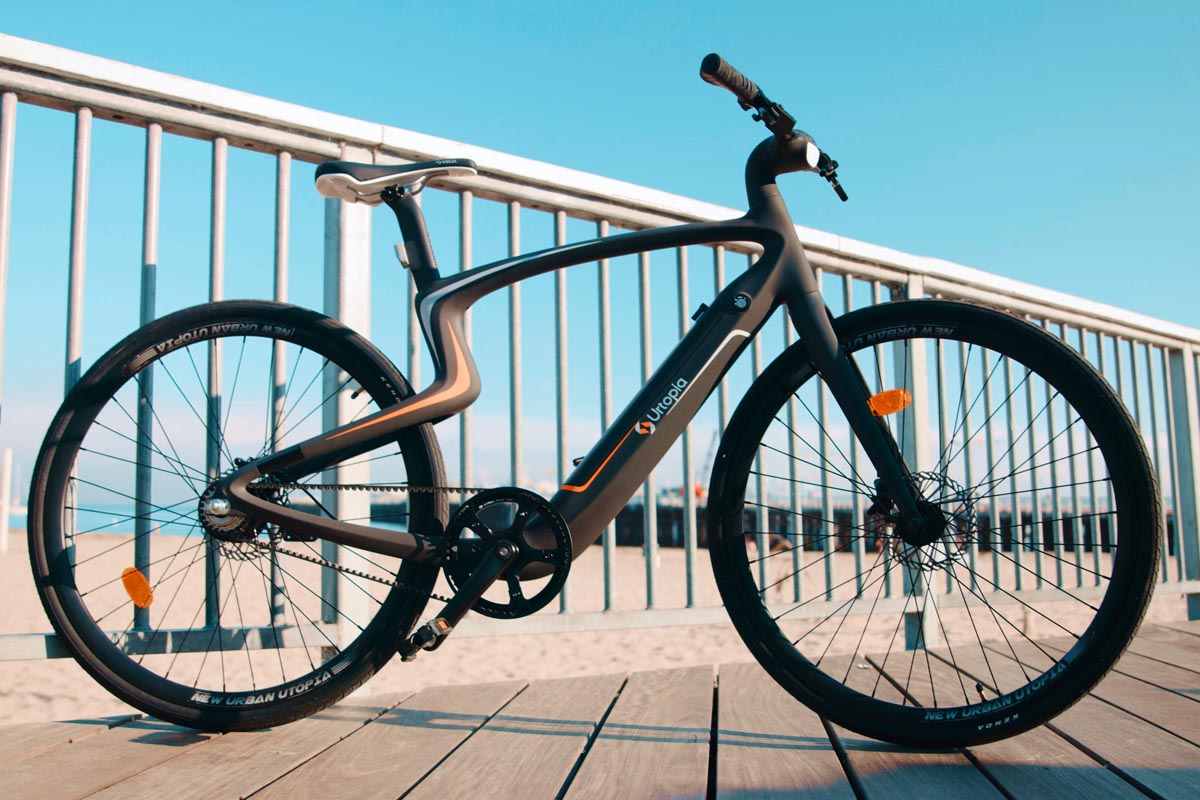 What does the ebike of the future look like? For many, it’s a vision of integration that offers a riding experience that makes it easier, and safer, to ride a bike. We’ve seen many of these different integration concepts from one bike to another over the years, but the Urtopia Carbon eBike packages them all together—all at an eyebrow-raising price. 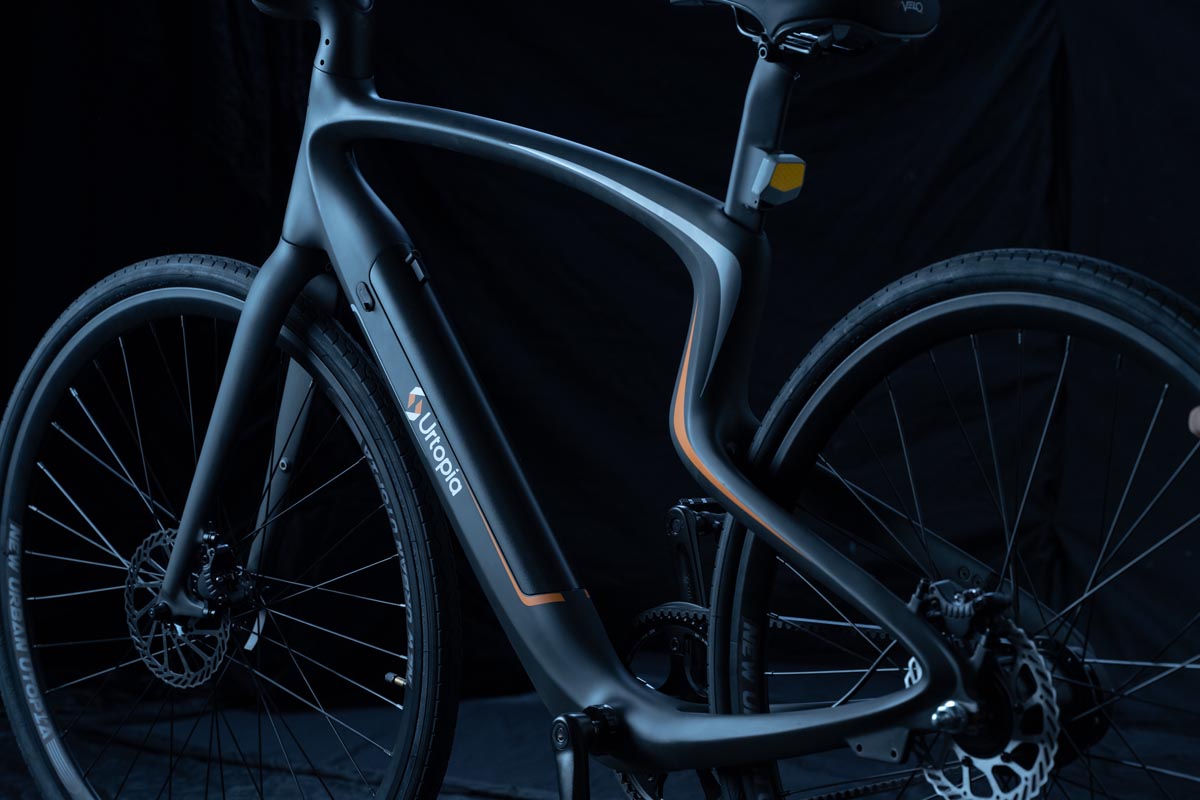 Utilizing an unspecified grade of carbon fiber, the Urtopia is designed without a complete seat tube, giving the bike a striking look with an integrated battery in the downtube. The Urtopia rolls on 700c x 35mm puncture-resistant tires and has a single-speed drivetrain. 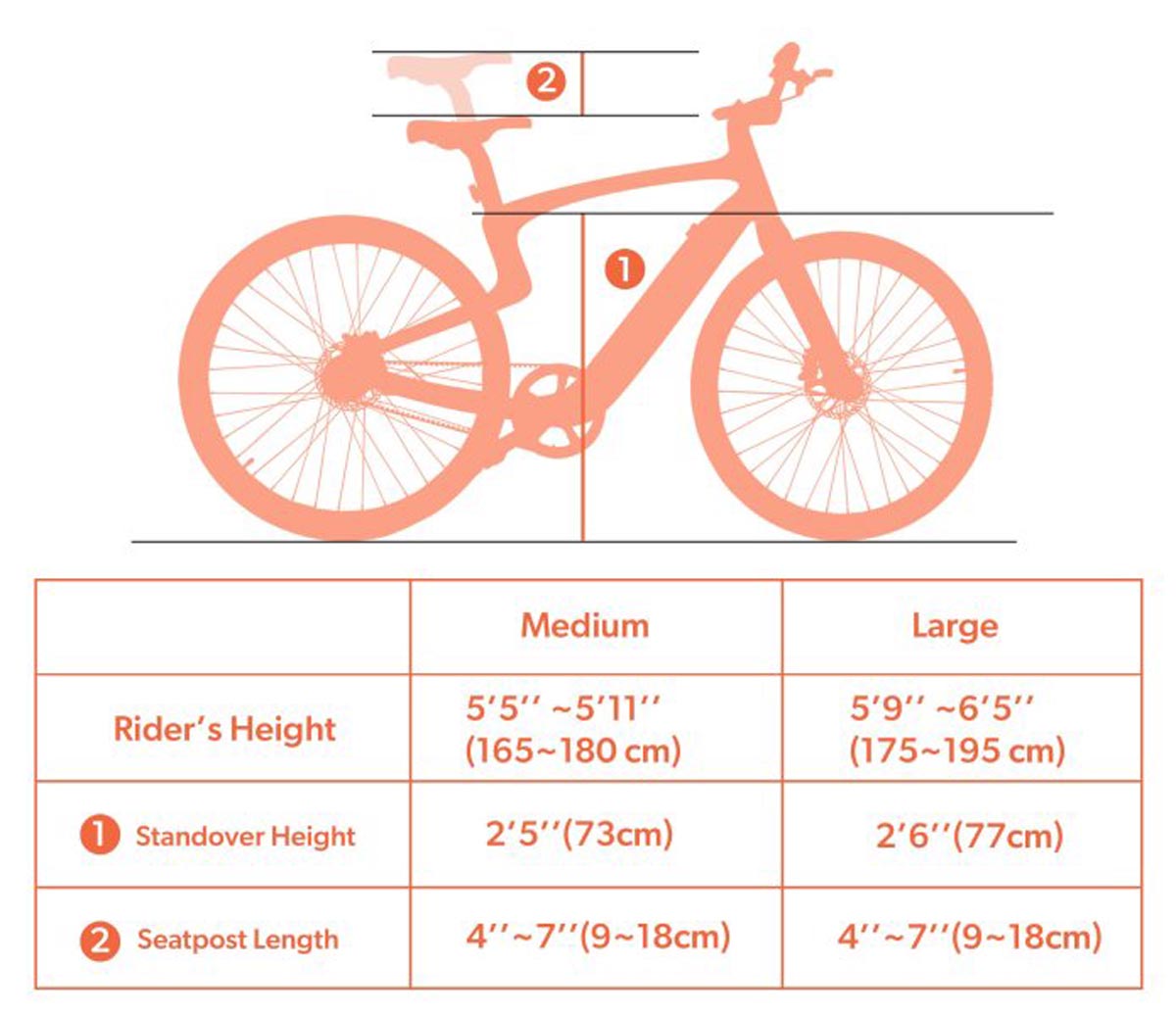 Offered only in two sizes, that frame design will have a negative effect on the saddle adjustment range though. You won’t be able to slam the seat post since it will bottom out on the frame, and you won’t be able to extend the seat post beyond the minimum insertion line. Urtopia’s geometry chart is a little confusing, but it appears that the saddle height adjustment range on each size is limited to just 3″, extending from 4-7″ above the top tube. Not to mention that it uses what appears to be a proprietary seat post design, which means if you have a problem with it, you won’t be able to replace it with something at your local bike shop. Urtopia gives a rider height range for each frame size, but it would be more helpful if they gave a total saddle height range instead. 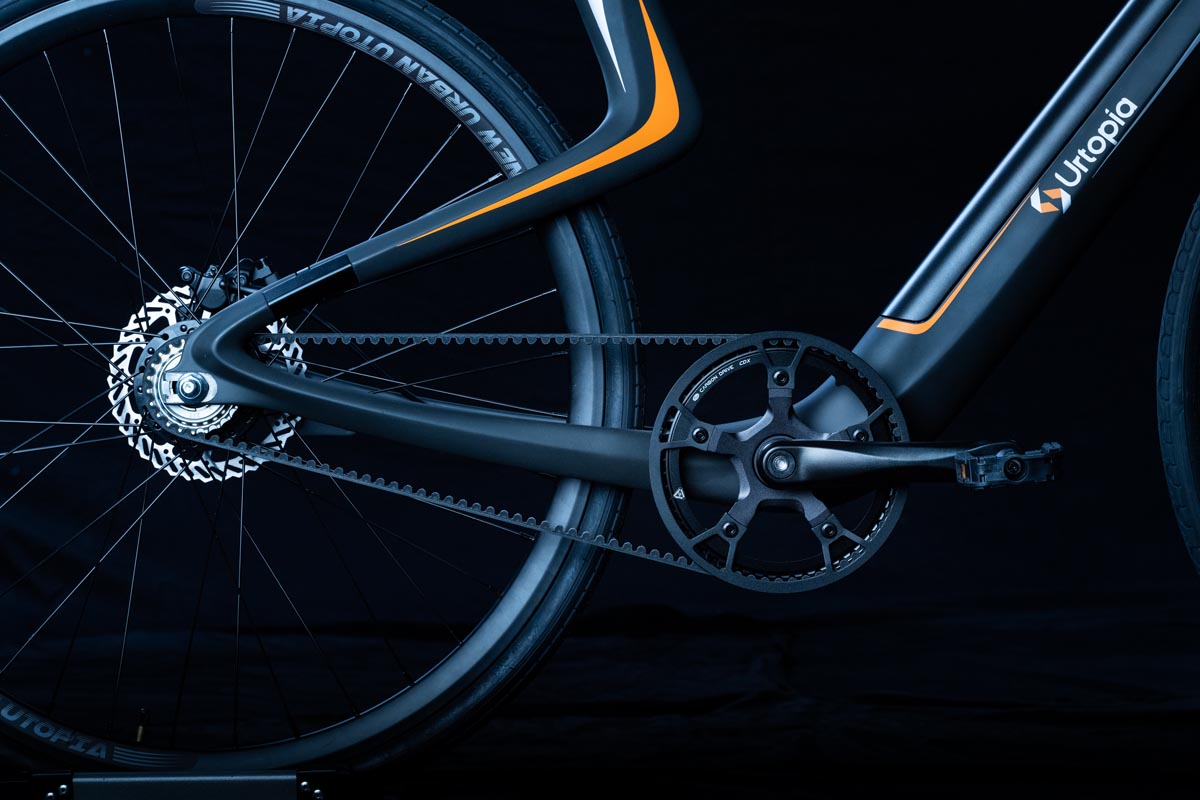 Driven by Gates’ more affordable Carbon Drive CDN belt system, the Urtopia won’t blow anyone away with its power or battery life. The 250w rear hub motor is powered by a relatively small 360Wh LG battery—though a smaller battery means less weight, which is a big part of how this bike gets down to approximately 30lbs as claimed. There are five power modes, which based on your use claim to offer 30-80 miles on a charge. The assisted top speed is limited to 20mph in the U.S. and 16mph in Europe, but they mention the top speed is adjustable through the app. 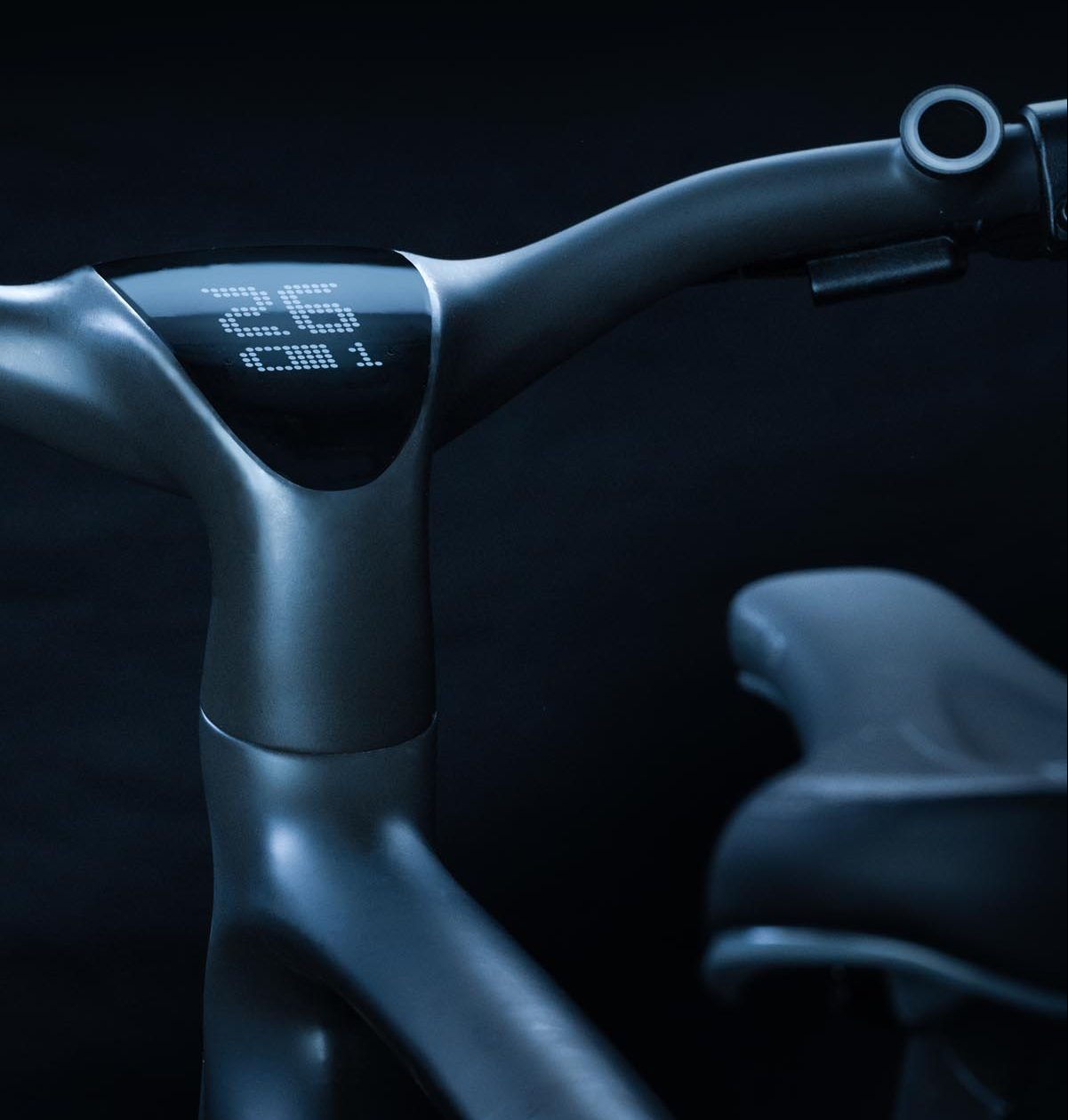 So with a limited size range and lightweight powerplant, why would someone consider the Urtopia? That all seems to come down to electronic integration, starting at the Smartbar. Also made from carbon, the Smartbar has an integrated dot-matrix display and a fingerprint reader to unlock the bike. To connect the bike to just about everything, there is a built-in eSim card for 4g, Bluetooth, Wifi, GPS, and a gyroscope to detect theft. Oh, it’s all apparently voice-controlled as well.

In one of the coolest integrations, there is mmWave radar built into the back of the bike to detect oncoming traffic. We’ve seen this before in the likes of the Garmin Varia, but not only is this built into the bike, but it will supposedly provide haptic feedback through the handlebar to alert you to approaching traffic. 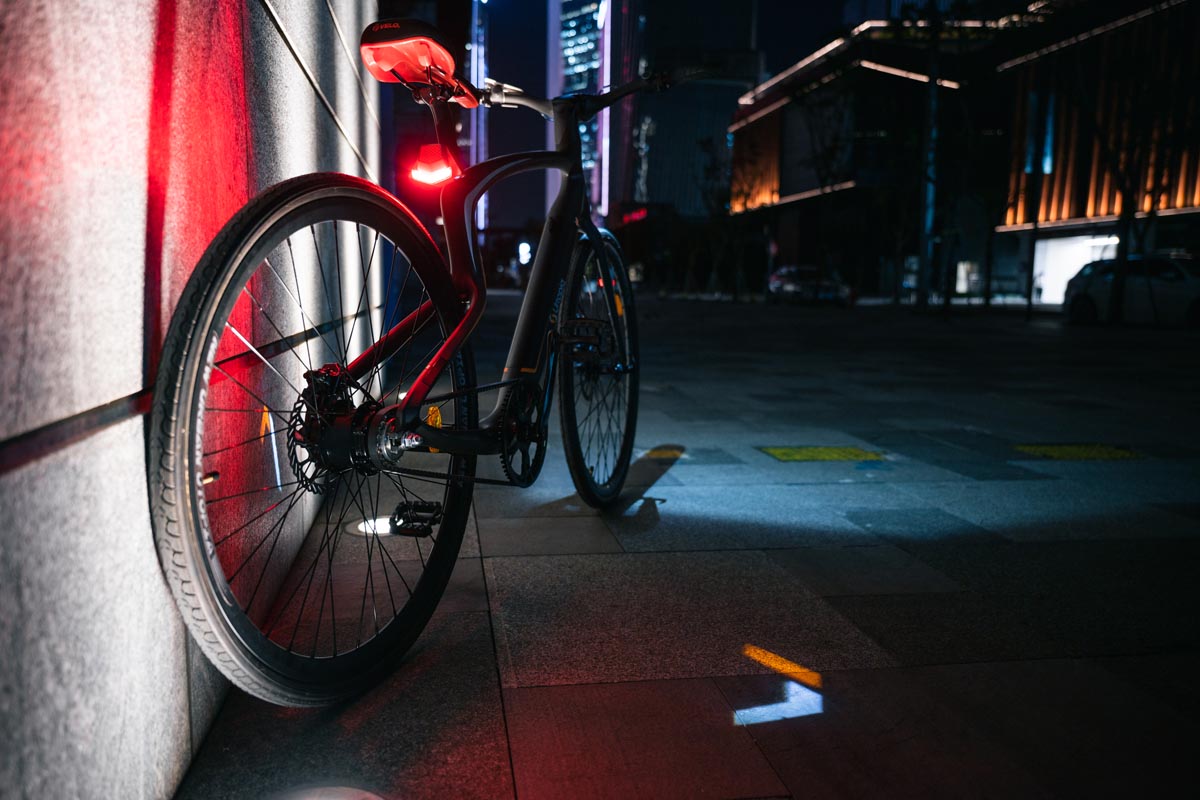 There’s also integrated lighting including projection lights that function as turn signals via a control on the left side of the bar. 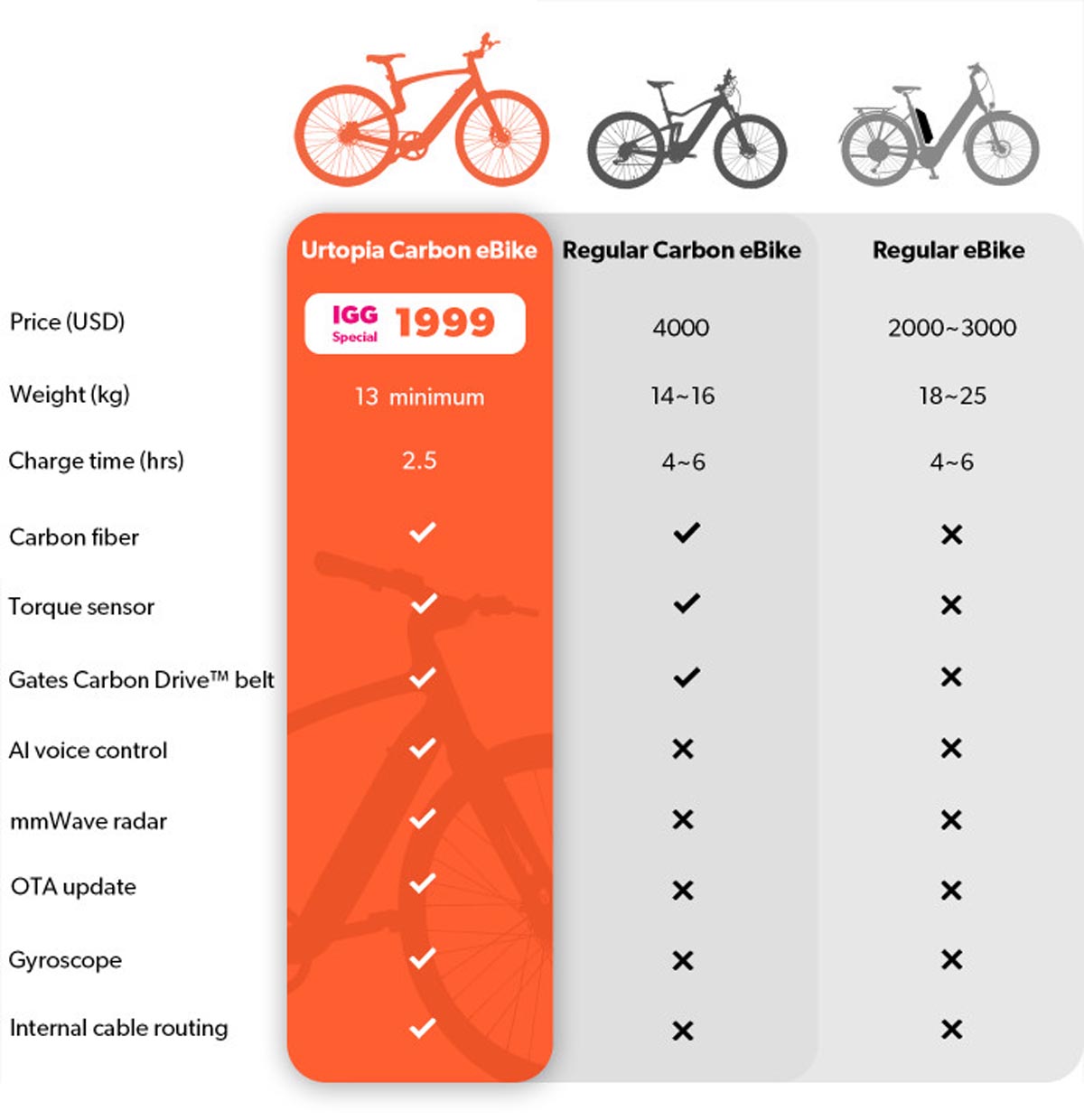 Urtopia makes a lot of claims on their Indiegogo page, with some of them a bit disingenuous at best. Take the chart above for example—the charging time is about half that of the competition.  But those competitors likely have 500Wh+ batteries compared to the 360Wh battery of the Urtopia, and larger batteries will take longer to charge. Also, we don’t know of many “regular carbon ebikes” that don’t have internal cable routing. There are also going to be bikes in that category with Over The Air update capabilities thanks to the new Bosch eBike Smart System if they don’t already have it.

That’s not to say that the Urtopia doesn’t have some unique features, especially for the price, but there’s definitely some cloudy marketing spin happening as well.

All in all, the Urtopia packs an impressive amount of tech into a ‘carbon’ ebike package that is currently selling for just $1,999 via IndieGoGo. Technically, the Urtopia has a retail price of $3,999, but the introductory price seems to be a big part of why this is the current most-funded project on IndieGogo at almost two million dollars. That breaks down to around 735 backers, but even so, Urtopia estimates that bikes will be shipping in February 2022.