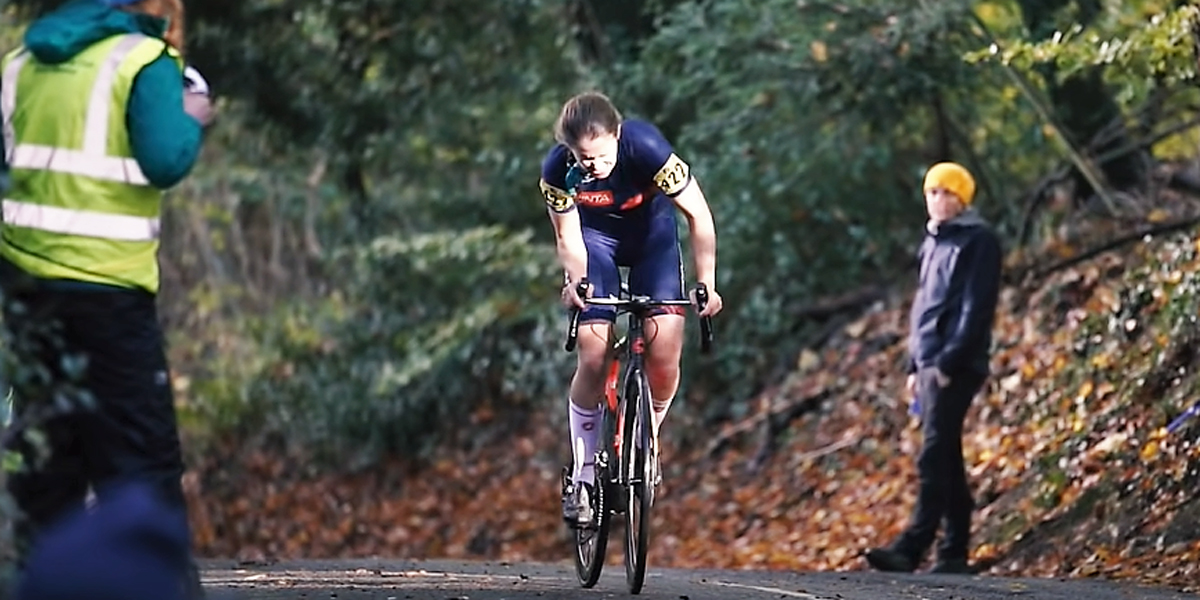 The British invented the safety bicycle (perhaps as compensation for the dangerous high wheeler they also came up with previously) but racing in the United Kingdom took its own peculiar course as competing en masse on the open road was forbidden, Isolated from developments on the continent, the Brits circumvented the rules with a focus on the individual time trial, furtively carried out. While time trialling and road racing have come out into the open, and British success at the highest level of racing is undoubted, there remains a peculiar holdover from days past: hill climb racing. 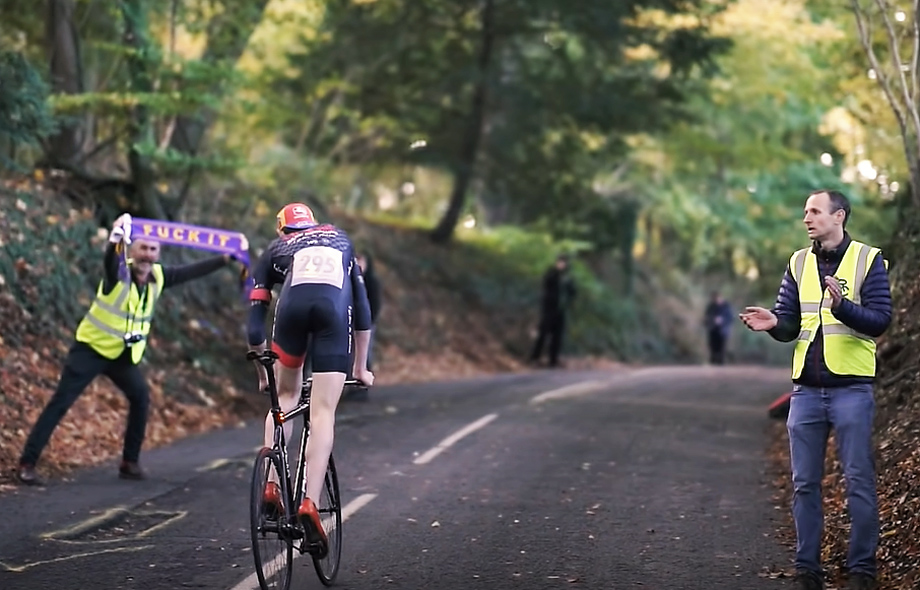 Great Britain may be limited in the number of snow-capped peaks on offer but it does present an impressive array of short and brutal climbs for a small(ish) island. In addition to an extensive series of local races, since 1944 there has been a national competition, held at a different location each year, to determine the best hill climber, male and female, in the country. 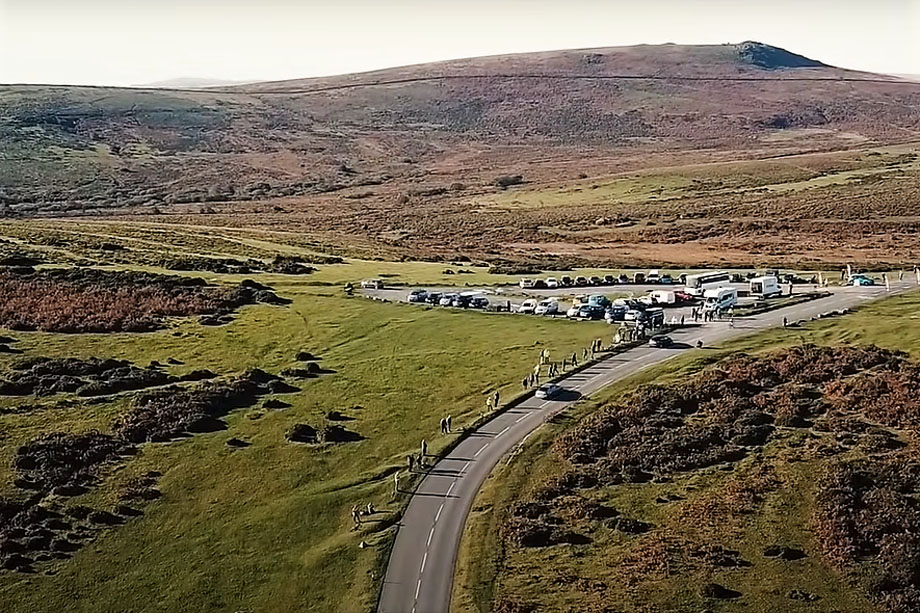 Hunt Bike Wheels is a Sussex-based supplier of high-quality handbuilt bicycle wheels and has a channel on YouTube featuring short videos about its products and people who use them. Recently posted was an interesting 20 minute film by Maciek Tomiczek, “Surfing the Line,” which covers the 2021 British National Hill Climb Championship, held on Winnats Pass in Derbyshire in October. Tomiczek is a professional photographer and cycling enthusiast.

The video is an entertaining look at what some have called “the most Corinthian of cycling events.” While it seems some participants may have some sponsorship, this is really an occupation for amateurs. For example, Andrew Feather, National Champion in 2018 and 2020, is a barrister and family man; Tejvan Pettinger, also featured in the video, teaches economics in Oxford and won in 2013. Darryl Webster, on the other hand, was a pro cyclist and a member of the British Olympic squad. He won the hill climb championships four times, 1983 to 1986 consecutively. Other non-amateur winners have familiar names: Chris Boardman, Malcolm Elliott, and Brian Robinson were top level British professionals. The last professional male racer to win appears to have been Dan Fleeman a decade ago. No non-British male rider has ever won the championships. The first Women’s National Championship was held in 1998. 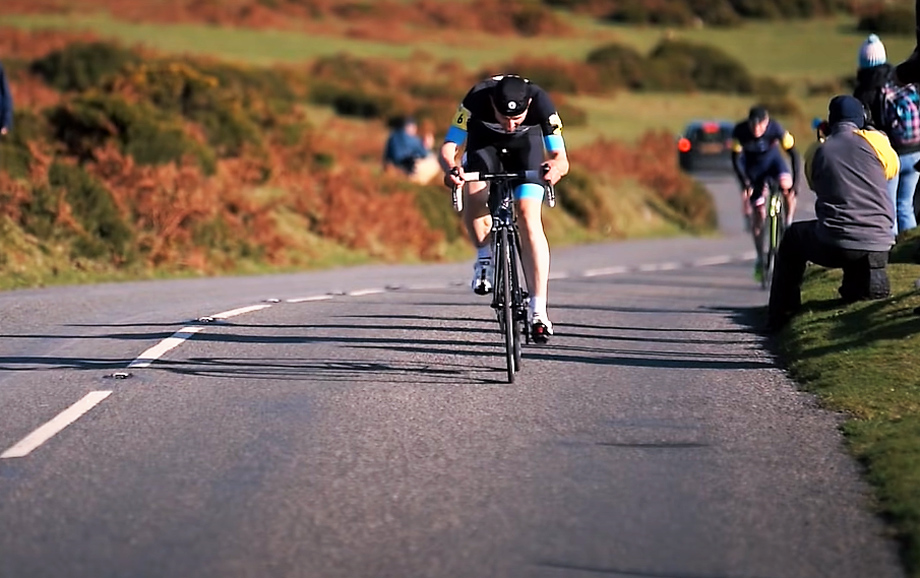 The hill climb races are unique for several reasons beyond enthusiastic amateurism. UCI rules do not apply so the tech employed is not what you would see at a normal road race or time trial. Bicycles are built up to be as lightweight as possible, which can go as far as shortened handlebars with no tape, and removing paint on the frame. Single chainrings are often employed; in the past, riders used fixed gear bikes to save weight. In fact, the previous record up Winnats Pass was set on a fixie ridden by Peter Greenhaigh in 1966! 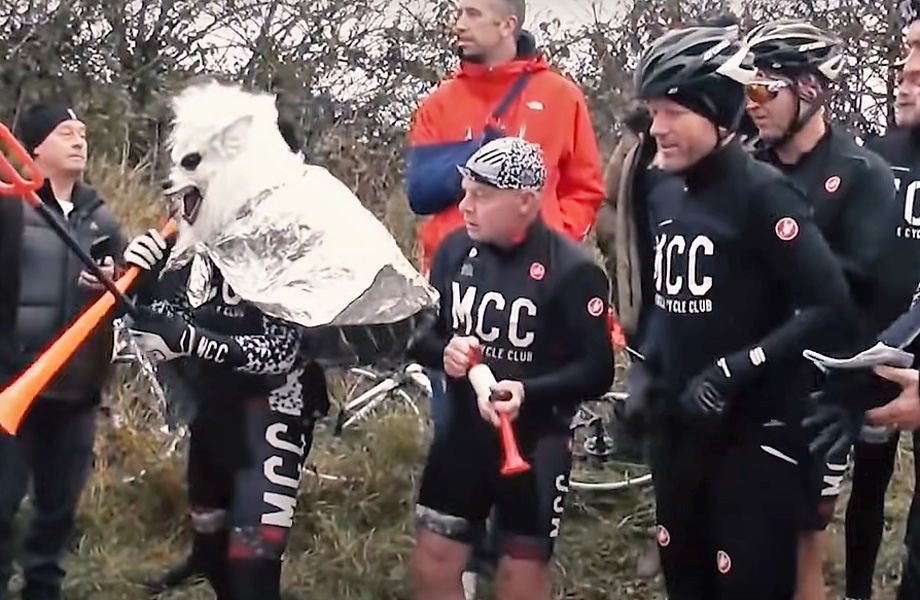 The other striking feature of these races is just how short and painful they are. Winnats Pass is 1.8 kms in length, with an average gradient of 11.4%, reaching a maximum of 18.3%. However, the championship course started partway up the climb and went for only 0.9 kms, featuring the hardest section. This meant a gain of 140 m, with an average of 16% and a maximum gradient of 23%. The organizers had this to say about the route:

“The steep unrelenting slopes accentuate the deleterious effects of gravity and are a stern test for the most capable cyclists. The topography of the pass creates a tunnelling effect for the wind and provides a perfect amphitheatre for watching the competitors as they inch their way to the finish line. In short, Winnats is the perfect “theatre of pain” and the perfect backdrop for the art of hill climbing.” 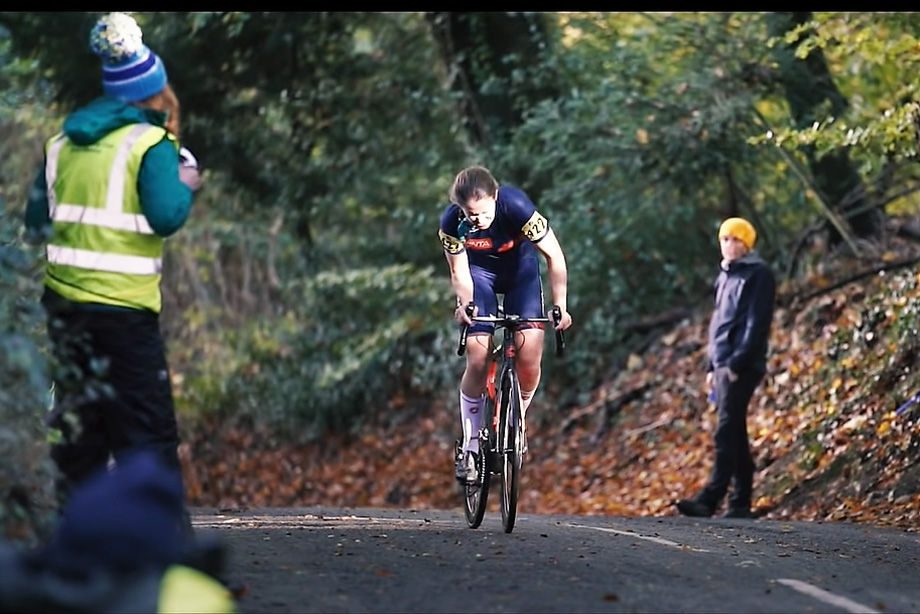 Sounds nice, yes? The intensity of this kind of riding makes for terrific viewing—and very little time separates the competitors. The difference between first place and 76th in the men’s race was 1 minute. And that winner in 1966 may have had his record broken, but he still would have placed third in 2021. To make things even better, it was raining this year. In addition to overall mens’ and women’s races, there were classifications for juniors/U23s too. There were no fat competitors to be seen. 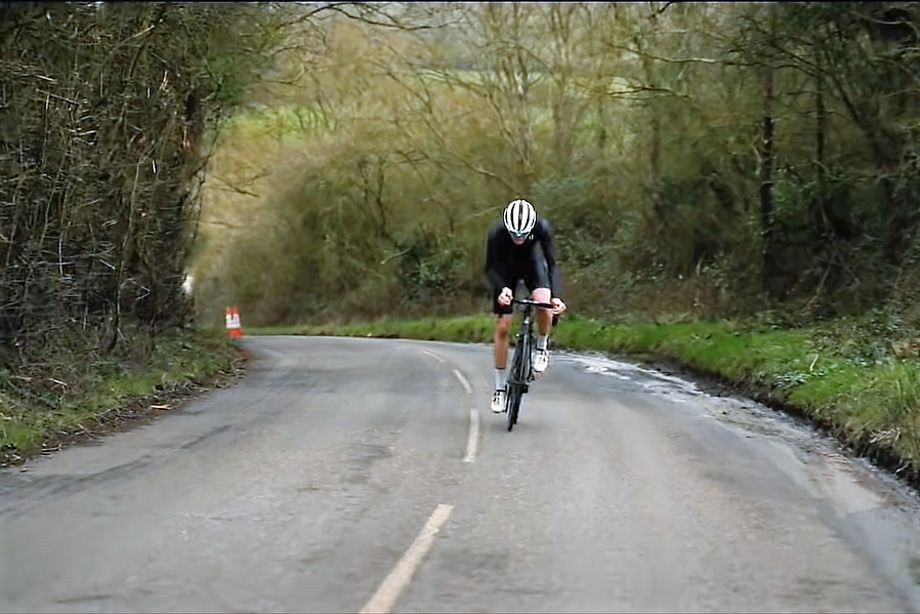 The British may have made a specialty of this kind of racing but of course hill climb competitions take place elsewhere. Austria’s Grossglockner race comes in different lengths but is over 27 kms; in Switzerland there were locations at famous climbs where cyclists could punch time cards at the start and summit, and Germany offered a similar arrangement sponsored by the Continental tire company. I myself am a veteran of the 2005-2007 versions of the Wintergreen Ascent (now the James Beazell Wintergreen Ascent) in Virginia, which offered up a 10,8 km course averaging 8%, kicking up to 15% as it approached the top of the Blue Ridge. In 2005 everyone was beaten by 16 year old Ben King, who unsurprisingly turned pro and currently ride in Europe with Rally. I would have done better if there was a classification by weight, as is the case of at least one hill climb in Switzerland! 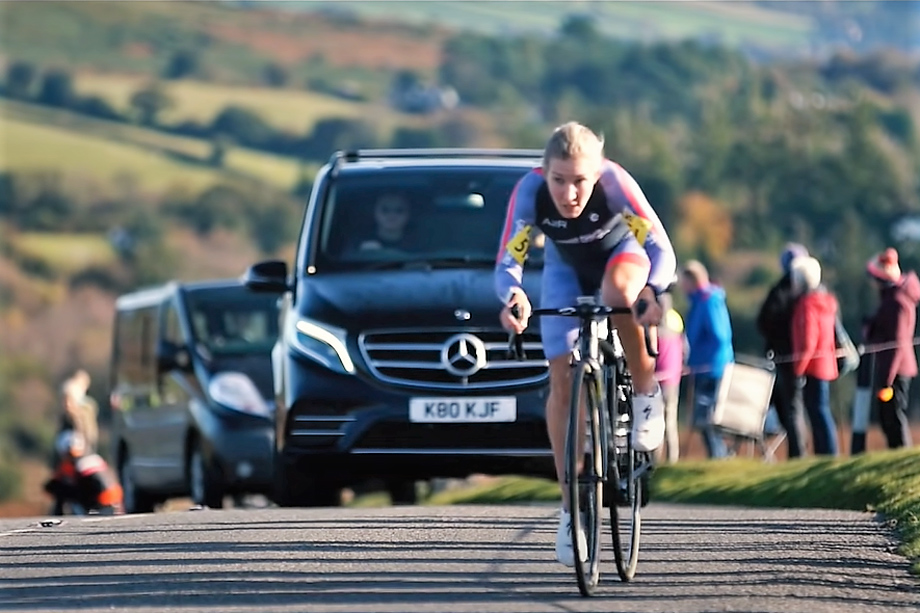 Anyway, returning to the video at hand, one is struck by the how happy the competitors look and the enthusiasm of the fans in spite of the intense effort, the rain-soaked road and the occasional vomiting. One of the great attractions of cycling is just how many forms it can take and how much satisfaction people can derive from it, even if that accomplishment involves some serious hurtin’. Or, in the words of Hermann Hesse, “You know quite well, deep within you, that there is only a single magic, a single power, a single salvation…and that is called loving. Well, then, love your suffering. Do not resist it, do not flee from it. It is your aversion that hurts, nothing else.” 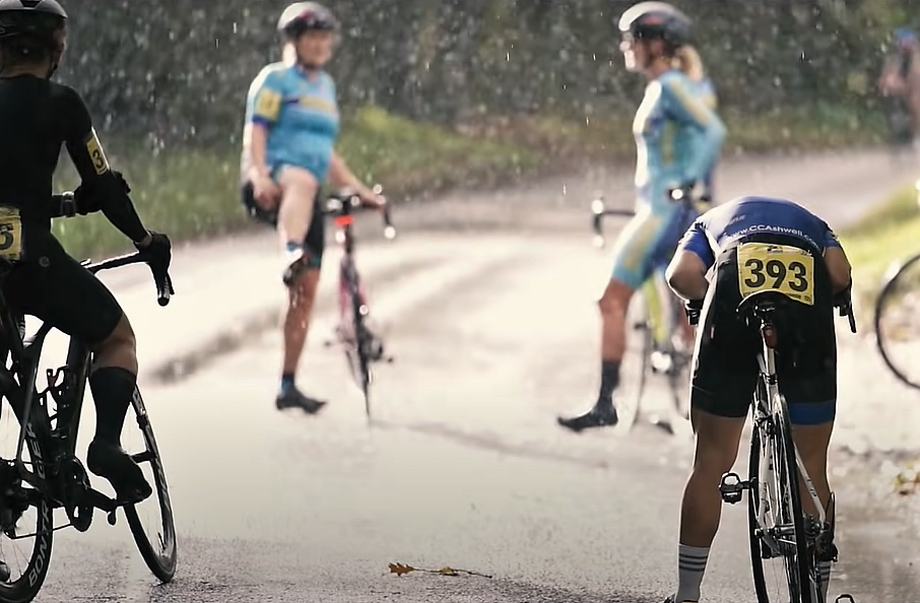