Welcome back to the Bikerumor Ask A Stupid Question series. We’ve got a bit of a strange one for you this week; we’re asking how cornering technique differs between Mountain Biking and MotoGP, and specifically, whether the counter-steering applied in MotoGP applies to Mountain Biking, too. 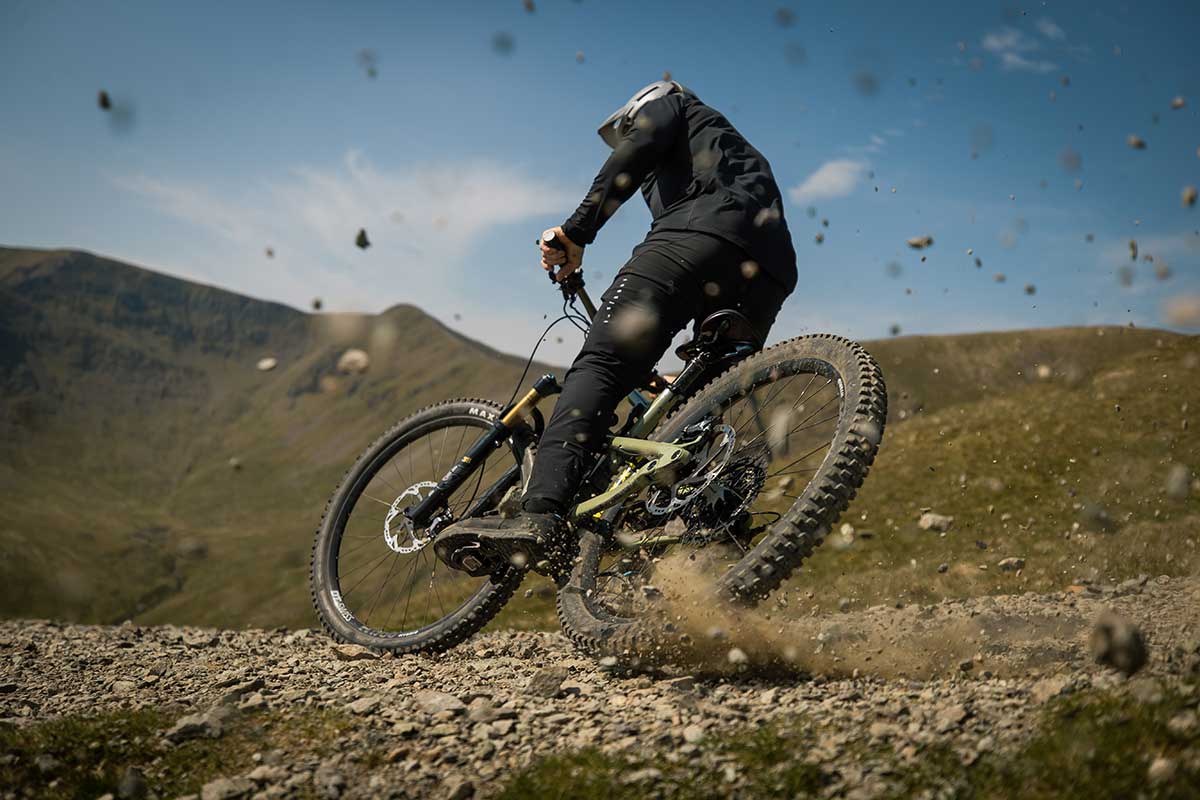 Of course, we’ve all seen the very Instagram-able “shralp” technique, some delicious examples of which I have collated at the foot of this article for your viewing pleasure. When the rear tire breaks traction, the rider counter-steers to exit the corner (turns the wheel in the direction opposite to that of the desired direction of travel) in order to prevent over-steer, and to prevent the front wheel from washing out too. But, what about corner initiation itself? 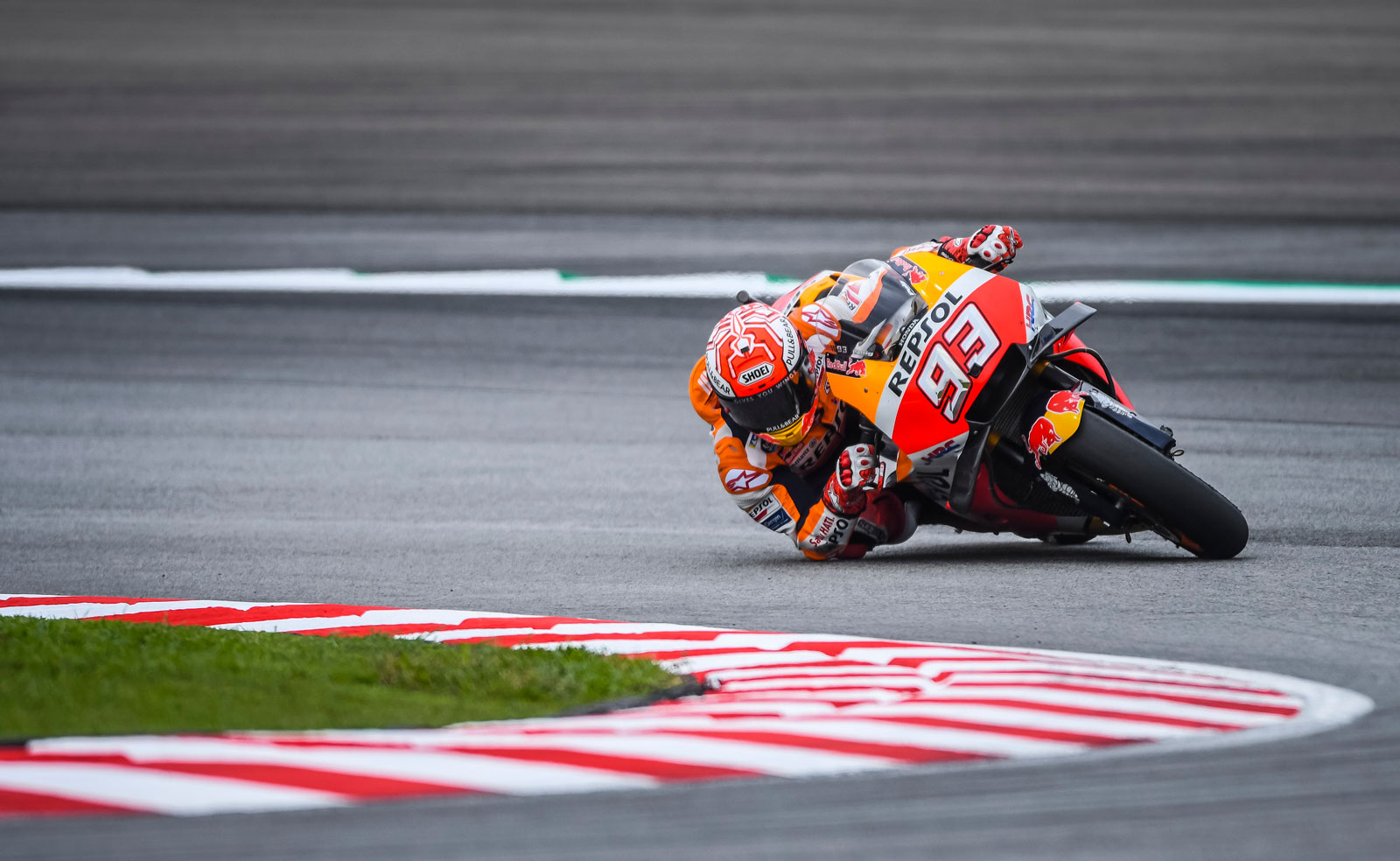 Marc Marquez and his brother Alex both ride a Mondraker F-Podium RR during the off season as part of their training programs; I don’t know about you, but I haven’t seen a mountain biker use the elbow to corner… yet.

It’s been a little difficult to find appropriate contributors for this one. While both are performed on two-wheeled vehicles, there’s no getting around the fact that they are still very, very different sports. However, I’m satisfied we have reasonable representation from both sides here; we have a mountain bike suspension tuner, who also happens to distribute suspension for motocross bikes, a former MotoGP team manager who has latterly co-founded an eMTB brand, a small Italian Suspension Manufacturer with previous experience in developing suspension for motocross bikes, as well as a much larger, more well-known suspension manufacturer who make forks and shocks for both Mountain Bikes and MotoGP bikes. They are as follows:

How does cornering technique differ between Mountain Biking and MotoGP?

Bright Racing Shocks: The fundamental differences between a motorcycle on the track in general and a mountain bike lie in two factors that must be considered together: 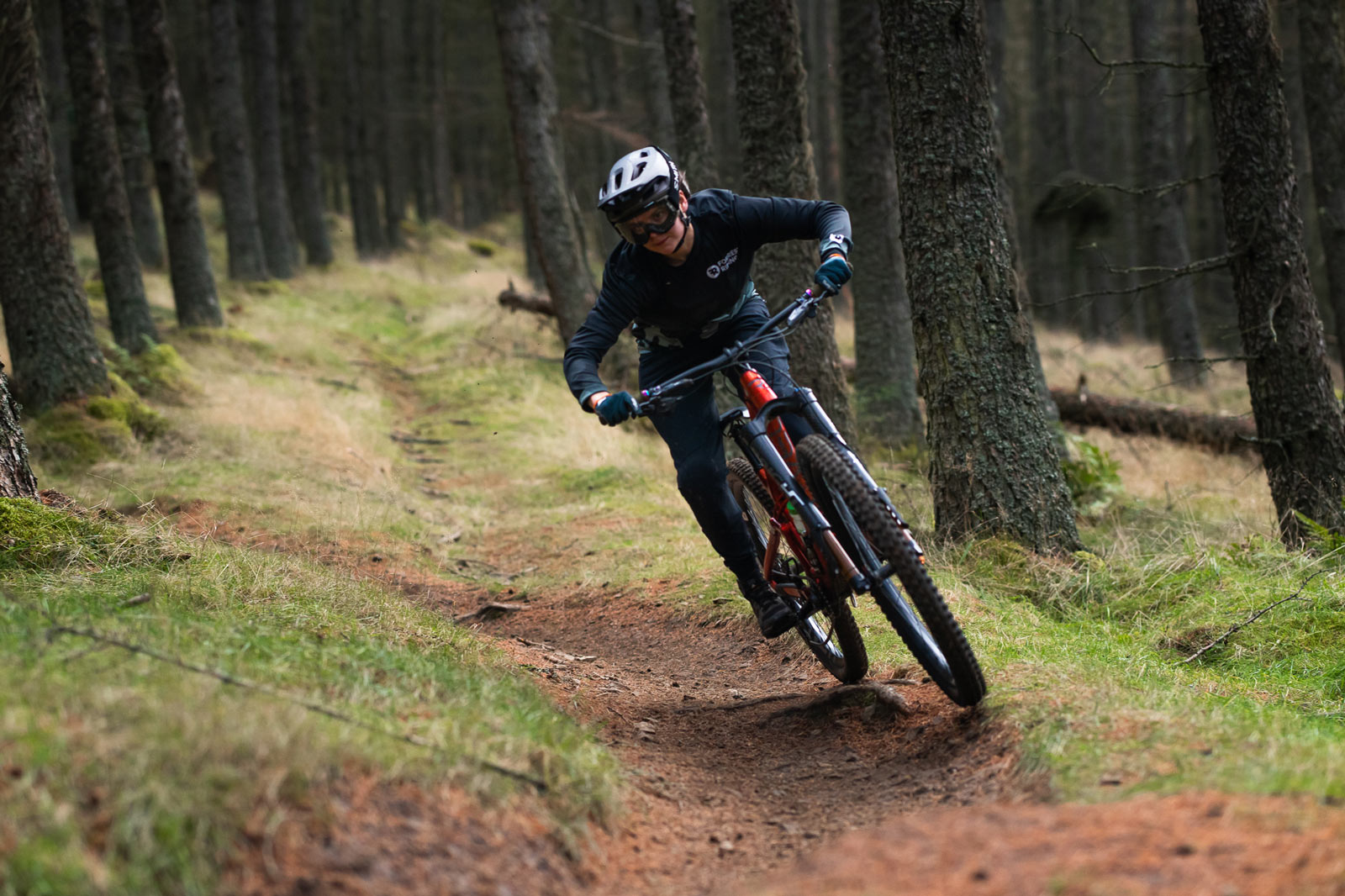 In other words, an MTB (like a downhill bike) can be moved at the last moment by the rider to force a particular passage. It is not possible to carry out this type of maneuver on the motorcycle. 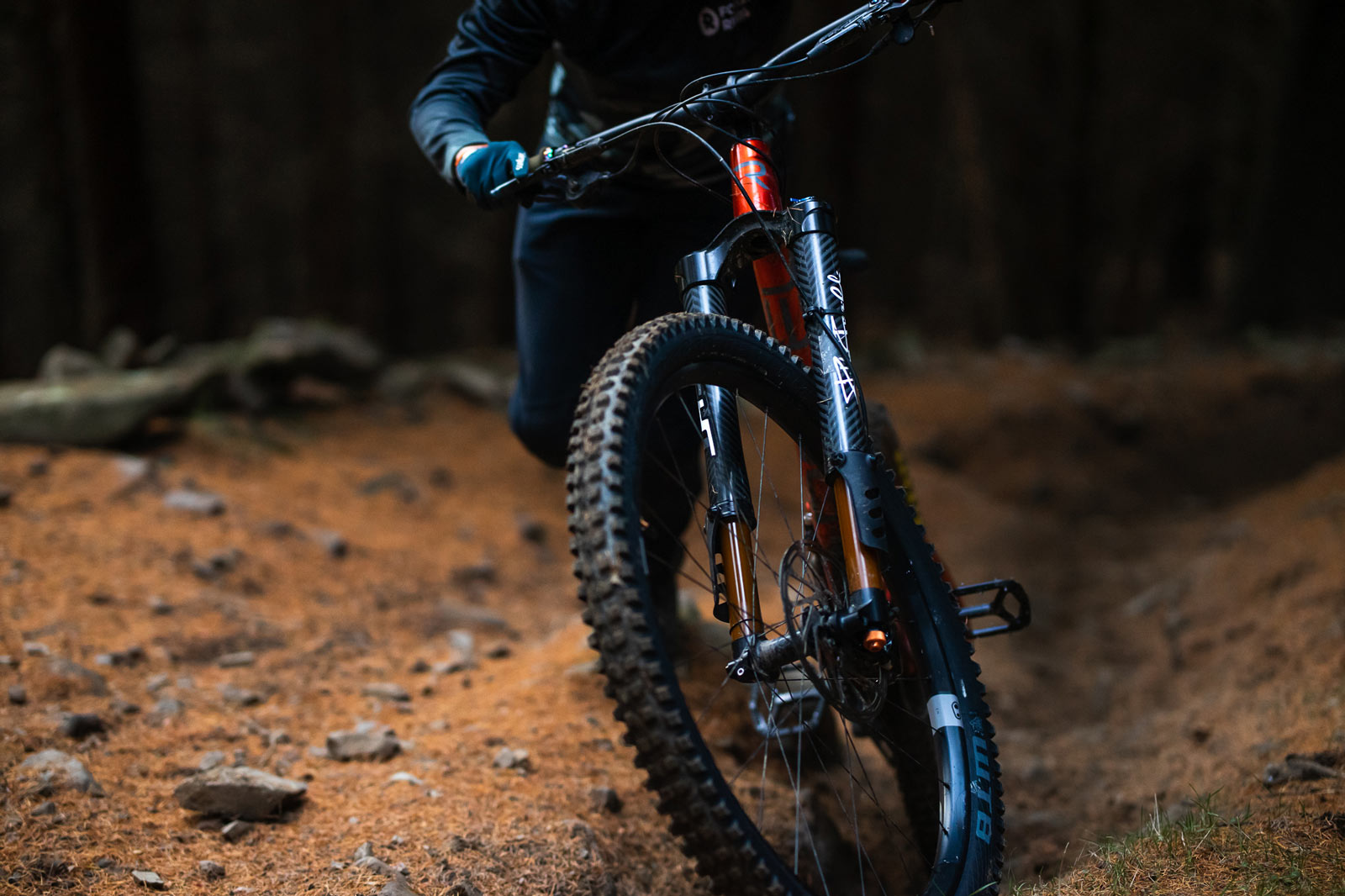 We are currently testing the Bright Racing Shocks F929 NEXT Enduro Mountain Bike Fork; it is designed to run a negligible amount of static sag. Credit: Blair Kemp.

When preparing a suspension fork for off-road riding, especially enduro or downhill mountain biking, the huge variability of the track must be taken into great consideration. It must be able to guarantee the rider a certain degree of handling. At BRIGHT, for example, we study in great detail the aspect of Sag management in order to create sensitive stresses even with a reduced static sag. This means that the rider is able to interpret the terrain and the trajectories with greater scope for improvisation, as they have a very reactive suspension fork at their disposal.

For off-road riding, precisely because of the variability of the track, the compromises to be made are very important to ensure great performance.

NSR Racing: Generally speaking, in theory, they are similar – weight the outside pedal/footpeg, apply counter-steer pressure to the inside hand grip, rotate the hips and position the head and torso low forwards, and towards the exit of the corner. In practice, because of the vast differences between the two sports you are not going to confuse the two positions with each other – vehicle weights, speeds, terrain, and corner radius will all combine to make sure you do not mistake your DH bike for your MotoGP bike.

THOK: The cornering technique is very different when talking Mountain Biking and MotoGP. The former is of course mostly performed off-road while the latter is a pure on-road on-asphalt activity. When cornering with a motorbike on a MotoGP or with a Bike on a MTB track you can use various techniques. 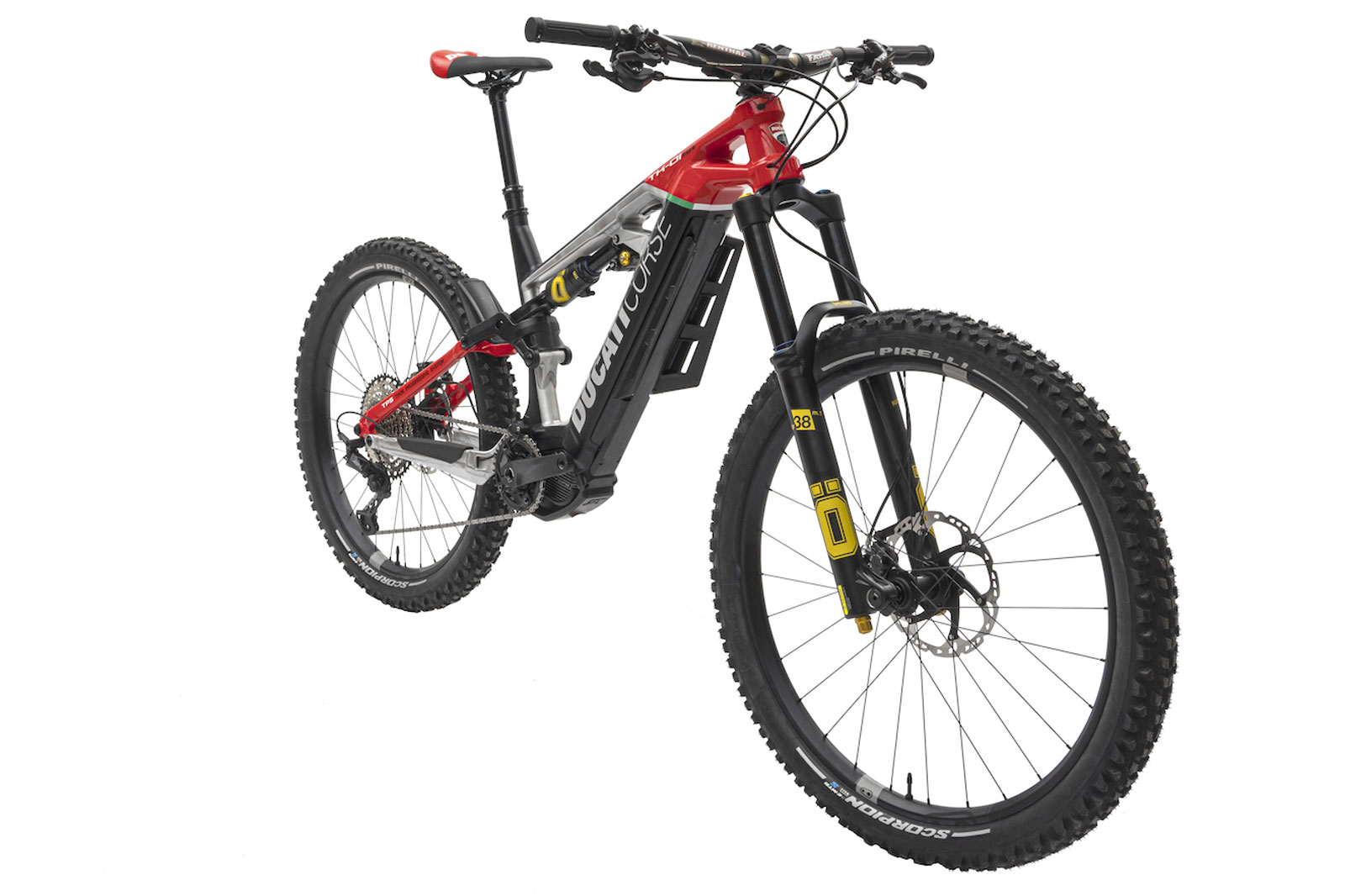 With the Mountain Bike you can corner using a banking or you can slide the bike on the gravel; in MotoGP you need to be super precise, you cannot ride banking against something. Also, the position on the [mountain] bike and on the motorbike is totally different, the handlebar is totally different, so let’s say that in both cases you are cornering on two wheels but it’s quite different when cornering with a Motorcycle and when with an MTB. 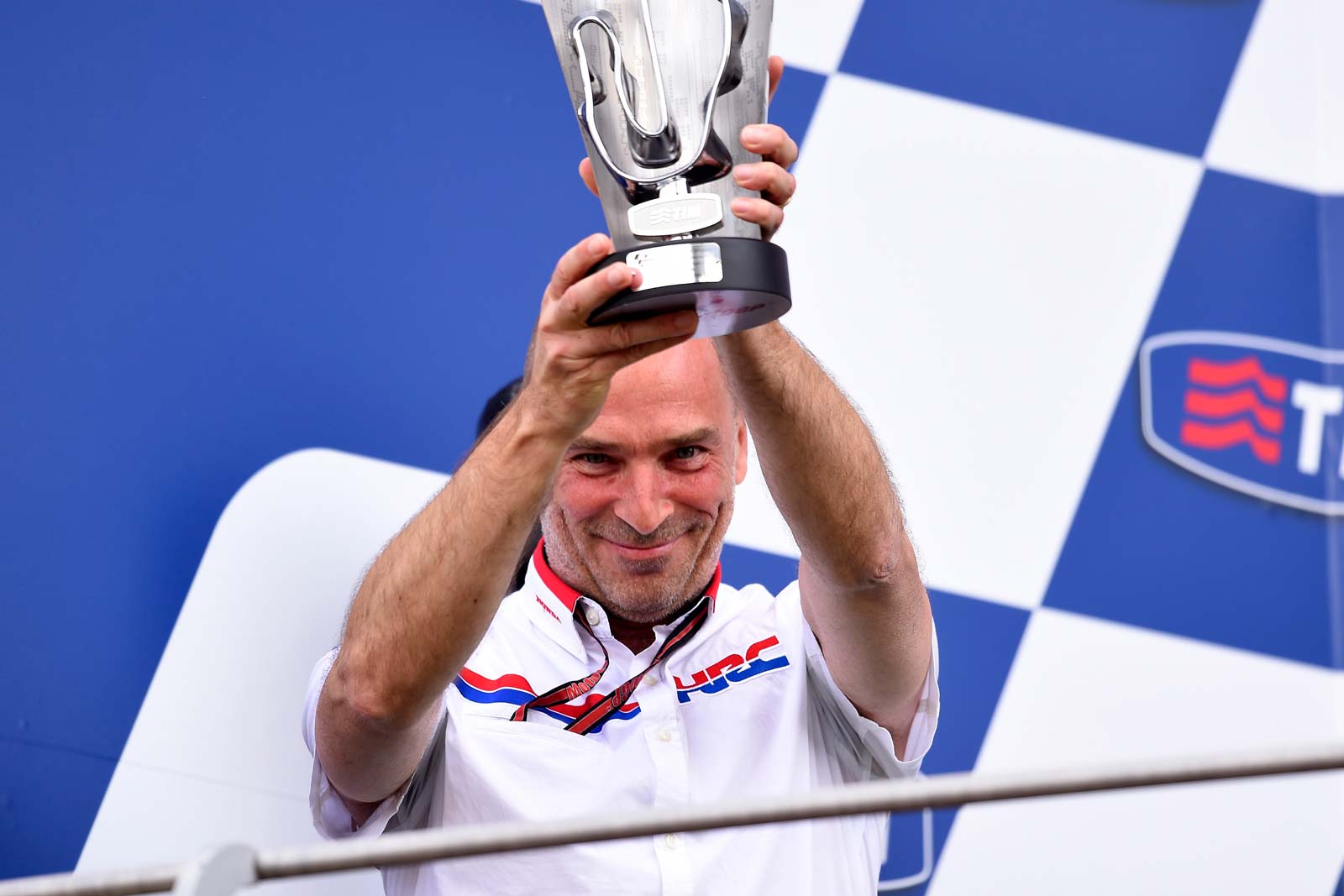 Livio Suppo is one of the founders behind the THOK brand. It is thanks to his large knowledge in the motorbike sector that the Ducati e-mtb (powered by THOK) project was born in 2019. As a matter of fact, Livio was -and still is – one of the most influential persons of the MotoGP scenario. A former Marketing Manager of Ducati Corse, from 2003 to 2009 he served as MotoGP Project Manager for the Italian motorcycle manufacturer. In 2010 he joined Honda Racing and became the first European to hold the position of Team Principal of the official HRC Repsol Honda Team. In MotoGP he has been the man behind 6 World Titles: 2 won with Casey Stoner (with Ducati in 2007 and with Honda in 2011) and 4 with Marc Marquez, with the Honda team (2013, 2014, 2016 and 2017).

Ohlins: Two completely different styles of riding. A MotoGP rider is hard on the brakes before a corner, steer in, open throttle power slide or accelerate out of the corners. For MTB, since you don’t have the power from the engine it’s important to maintain speed through the whole corner which is tricky, not too fast or too slow going in because it’s your speed going into the corners that will decide the speed out of the corner. 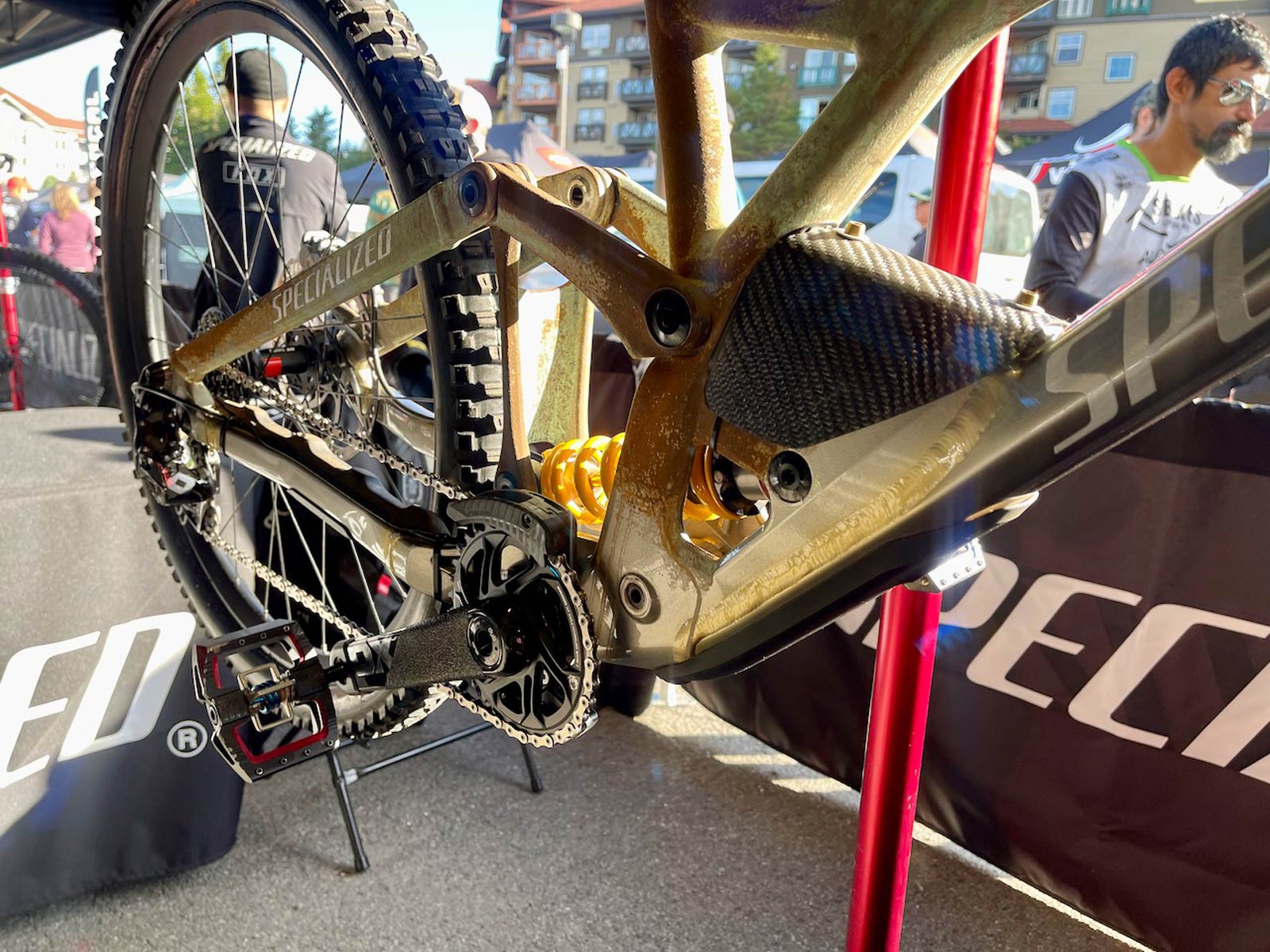 Ohlins has been running electronic suspension damping for years with the TTX 36 EC shock absorber seen on high-end motorbikes such as the Ducati 1199 Panigale S and Multistrada 1200S; earlier this year we spotted what could be the brand’s first attempt at electronic suspension for mountain bikes on Loic Bruni’s Specialized Demo

In MotoGP, some of the riders counter-intuitively steer away from the direction they want to travel in. Does this ever happen when cornering a mountain bike, or even a regular road bike, at high speed? 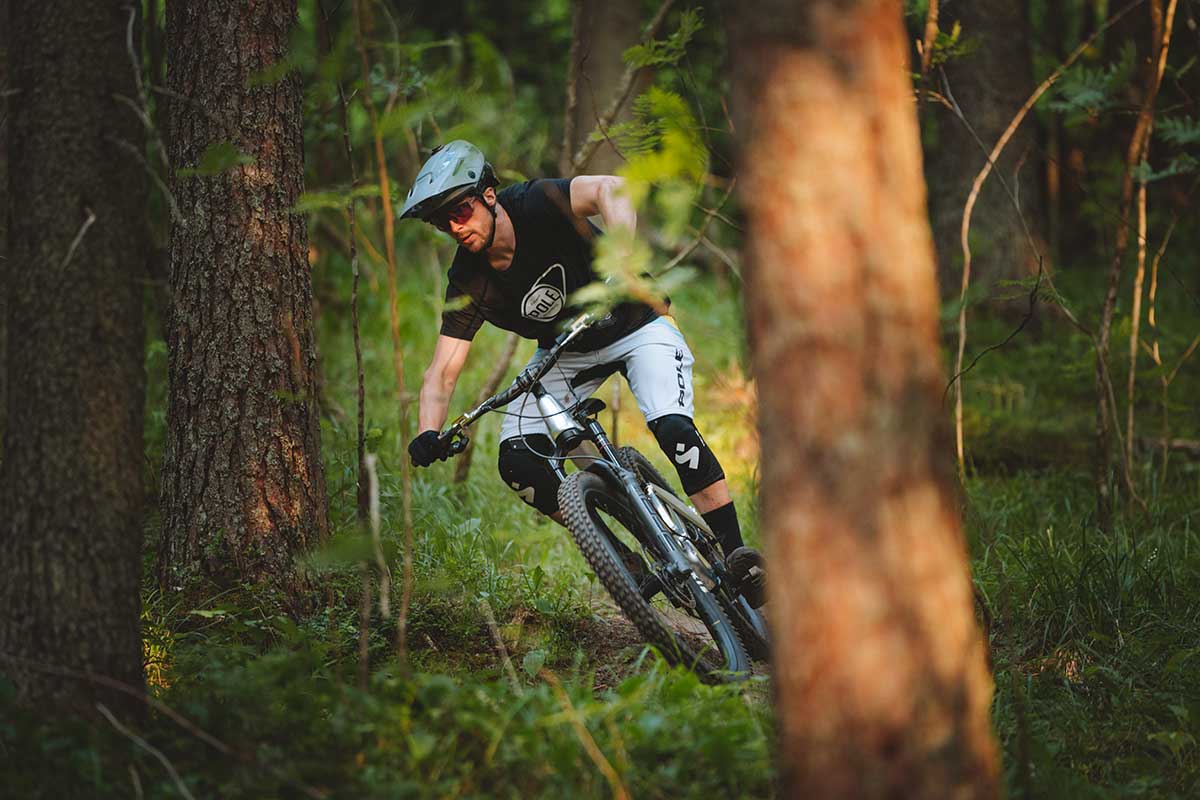 The key difference is due to the weight difference between a 16 kg DH bike vs a 157kg MotoGP bike – the required amount of counter steer on a bicycle is barely noticeable because of the relative weight advantage the rider has over the bike, whereas the MotoGP bike has more mass in general, but also a huge amount more rotating mass (wheels, crankshaft etc.) which is rotating much faster. Therefore, the required counter steer input required to help initiate lean is more noticeable & deliberate.

THOK: If I understood correctly the question, I would say that yes, that’s true for the MotoGP but this is not a conscious movement that the rider is doing. It’s unconscious. So I would say it could be something typical of any rider on two wheels, either on a motorcycle and yes, on an MTB too. Ohlins: No, in MotoGP they are sliding their bikes as a part of their cornering and therefore need to steer away.

And now, some choice shralping and counter-steering for your viewing pleasure…