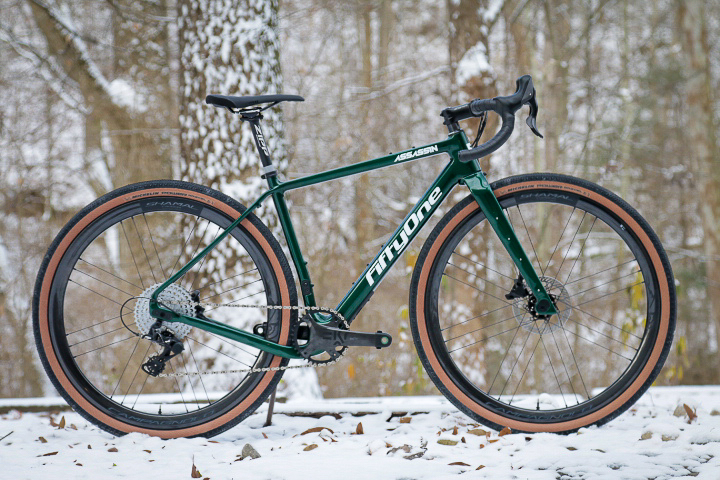 What is gravel? Because gravel means different things to different people, that is getting harder to answer. To some, it’s riding essentially dirt road bikes on gravel roads as fast as possible. To others, it’s long stretches of pavement punctuated by ripping through local mountain bike trails, searching for any dirt possible. Add in the bikepacking and adventure component, and “gravel” can be anything you want it to be. Kind of like the new model from FiftyOne Bikes (within reason, of course). If you’re familiar with FiftyOne Bikes, then up to this point, that’s due to their custom road bike business. Based out of Dublin, Ireland, FiftyOne bikes was founded in 2016 by former pro cyclist, Aidan Duff. Since then, FiftyOne has put out an impressive number of jaw-dropping custom builds. They’ve even found their way to big names like Conor McGregor. That part of the business hasn’t changed. In fact, FiftyOne has increased their frame building capacity by about 200% since we last visited in 2018. If you want a custom road bike (or even a custom gravel bike), simply pay your deposit and the current lead time is around 10 weeks after the final sign-off. 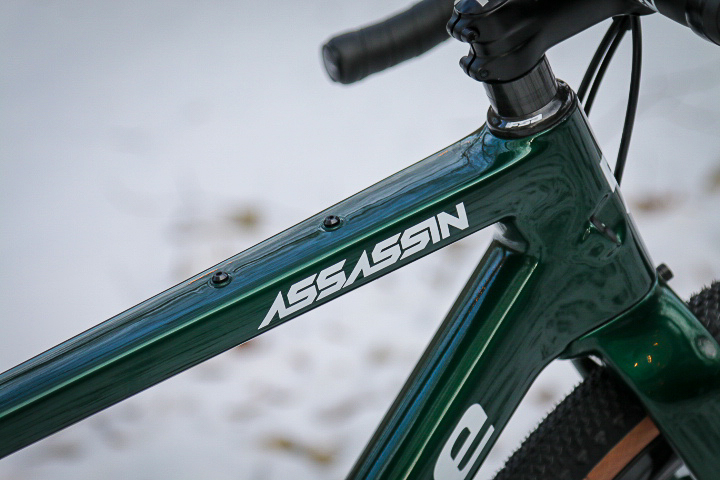 But what about those riders who aren’t looking for a custom frame? With the launch of the Assassin, FiftyOne now has an option in that category as well.

According to Aidan, the Assassin project began about three years ago. At that point, they had built some custom gravel frames for customers, but they envisioned a bigger market for frames that weren’t quite as expensive as the full custom route. Coming at it with the “widest possible spectrum,” FiftyOne wanted to build a progressive gravel bike that could be tailored to the individual rider and terrain.

Speaking over the phone, Aidan mentioned that the inspiration came from the world of mountain bikes where flip chips were used to modify a bike’s geometry, rather than keep it the same. He went on to say that based on their experience, they didn’t want to keep the trail numbers constant from one wheel size to another. Instead, they wanted to offer “usage-tailored handling” whether you want to “race, explore, tour, or shred.” 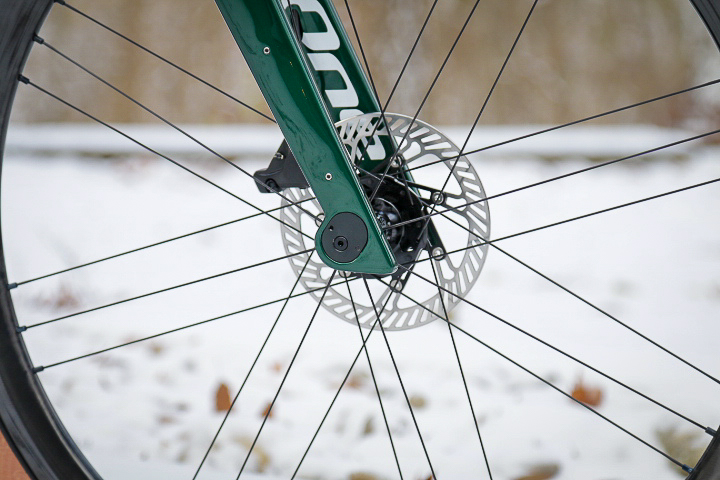 What does that mean? At the front 100 x 12mm thru-axle of the Trident fork, you’ll find a simple flip-chip with two positions —Hi and Low. Low works out to a 45mm fork offset with a higher trail number, and slacker head tube angle. The Hi position uses a 53mm offset for a lower trail number and steeper head tube angle. Note that the Hi and Low names do not refer to bottom bracket height or trail figures. In this case, Low or Hi simply refers to the position of the axle in the fork.

-Axle is in the upper position relative to the ground

-Axle is in the lower position relative to the ground 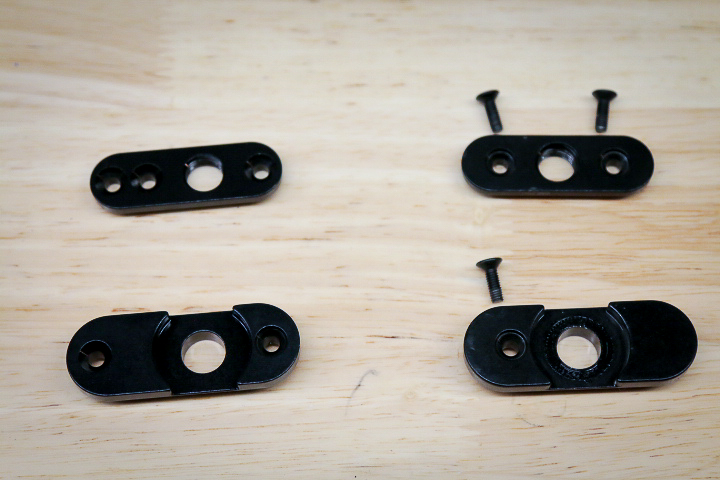 There are two sets of flip chips for the rear—one for the center position, and one for the front or rear position, depending on how it’s oriented in the frame. They’re also different for the two sides of the bike, the driveside uses two bolts to hold it in place, the larger non-drive side uses only one. 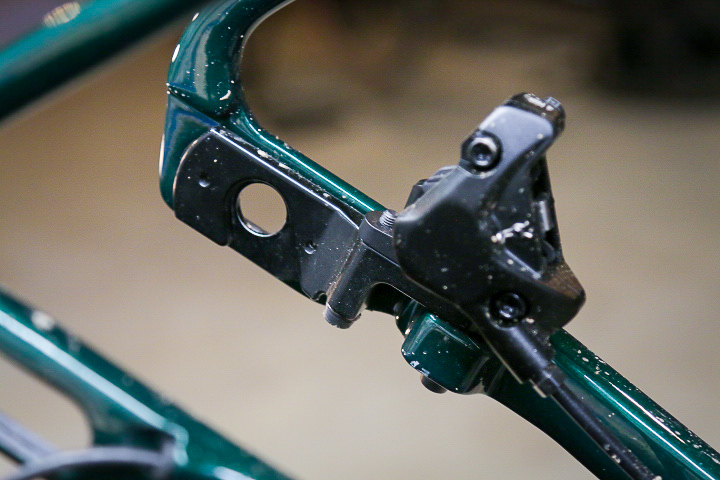 To swap the rear chip, you have to loosen the front bolt for the brake mount to slide the inner plate back and forth. 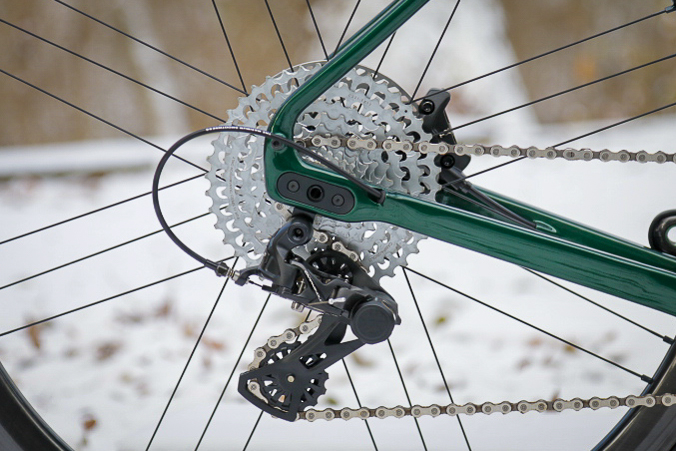 Pro tip: before swapping out the rear axle flip-chip, remove the derailleur from the hanger. It makes the process much easier.

Then at the rear 142 x 12mm axle, you’ll find a multi-part system with three different axle positions—Short, Mid, and Long. These positions allow you to adjust the wheelbase in roughly 5mm increments.

That means just in the flip chips alone, you have six different combinations in terms of geometry (Short-Low, Mid-Low, Long-Low, Short-HI, Mid-Hi, Long-Hi). Add in the option of 650b or 700c wheels and tire clearance up to 47mm in both sizes, and you have a bike with a lot of options. 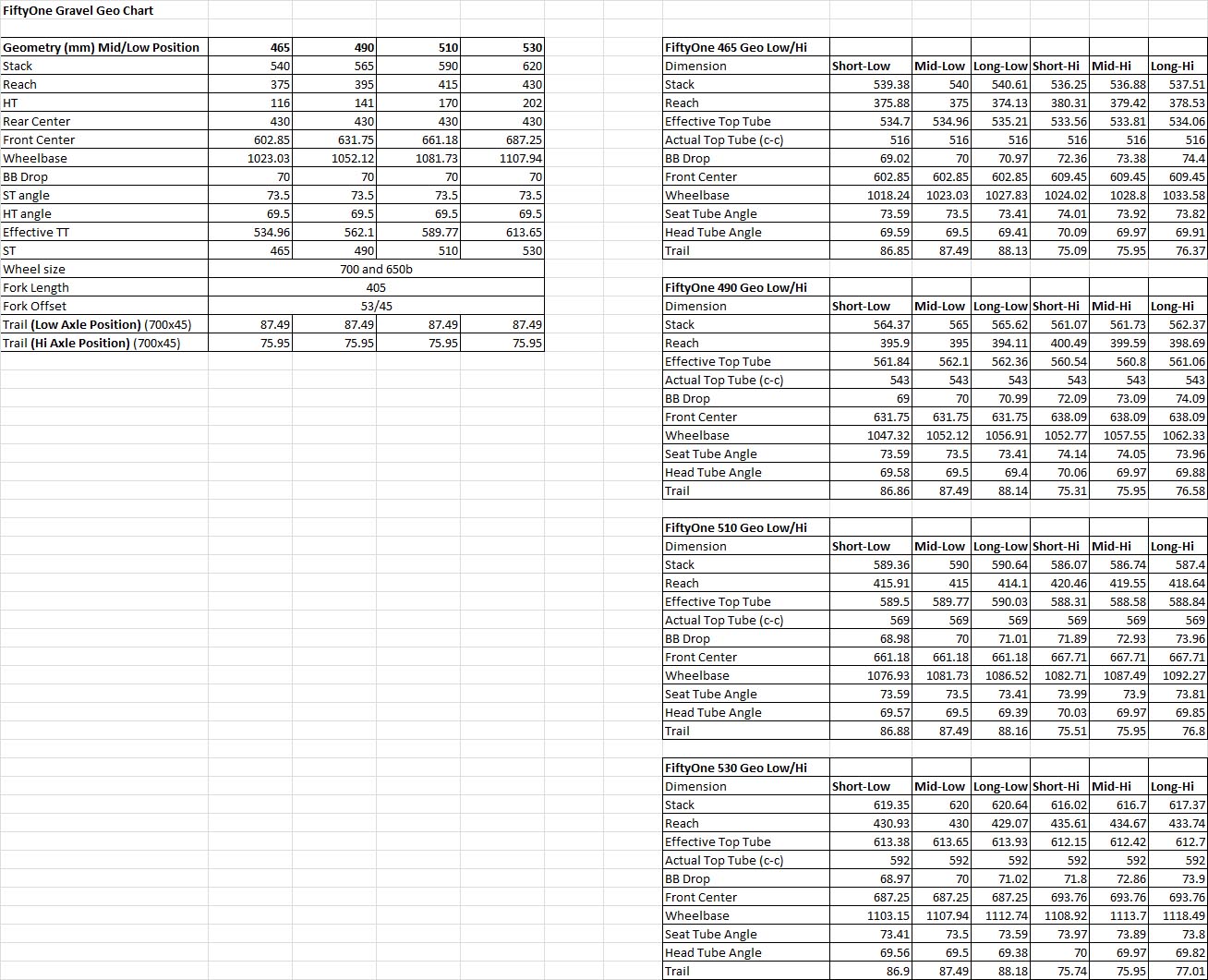 Except for sizing, that is. Unlike FiftyOne’s custom bikes, the Assassin will initially be offered in just four sizes. These geometries are all based off the modern long top tube/short stem concept for increased stability, confidence, and reduced toe overlap with big tires.

It’s also their first mass-produced frame, meaning it’s made in Asia—from high-end Toray T1100, 800, and 700 carbon fibers. That mix of fibers helped them to get the weight down to 1050g for a medium frame. Sure, that’s no 725g Specialized Crux, but all those flip chips and mounts add up. And there are a lot of them. As for the complete bike, our small sample built up with Campagnolo Ekar 1×13 with Shamal carbon wheels, Michelin 700c x 47mm Power gravel tires, and Eason/Zipp aluminum cockpit components came in at 19.6lbs (8.89kg). Note that the wheels with the Ekar group and Michelin tires seem to be fairly heavy—I compared just the weight of the rear wheel to the one on my Otso, and even though the Otso had bigger 700c x 50mm WTB Venture tires, the wheel from the Assassin was still more than 300g heavier. 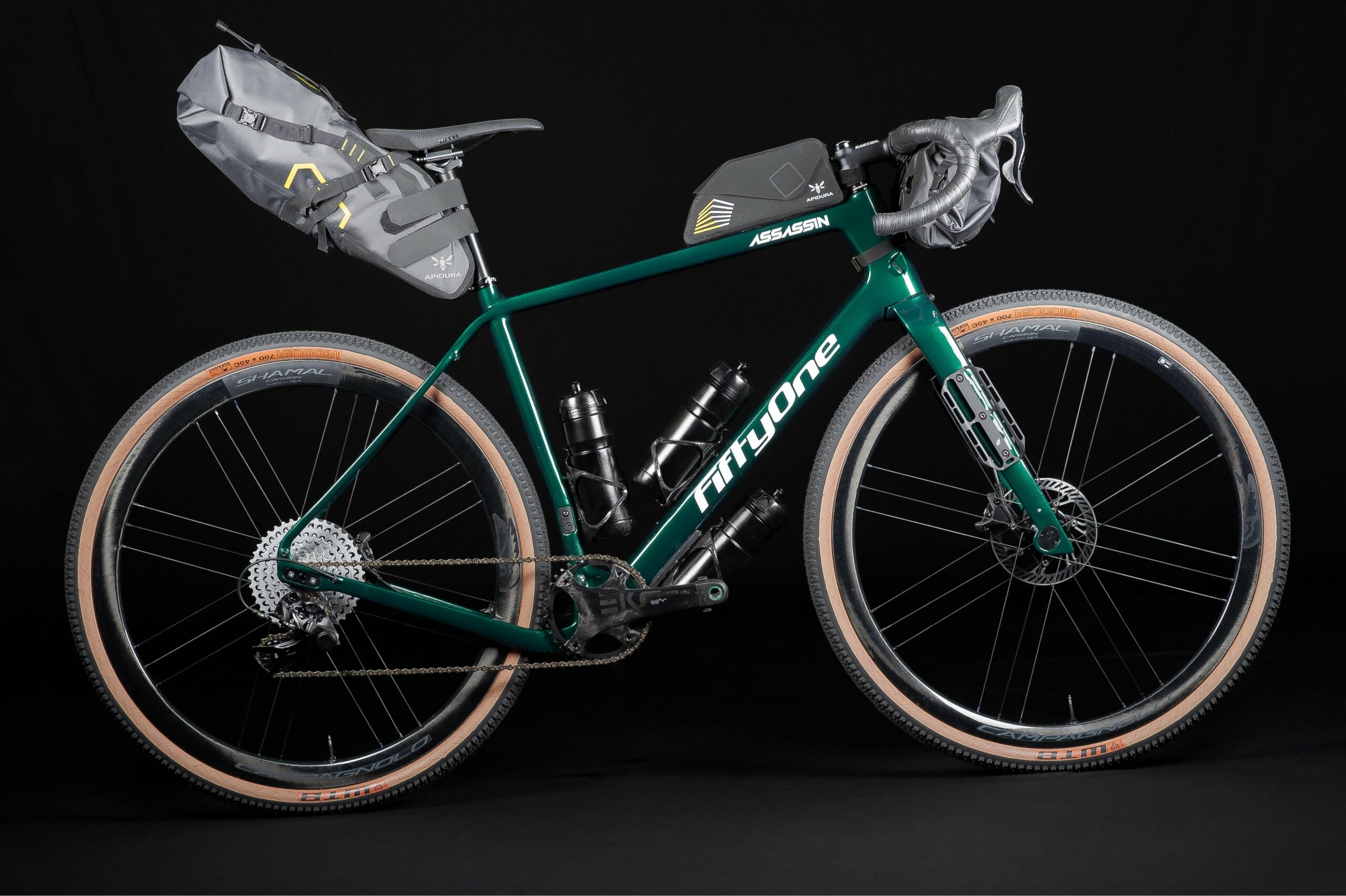 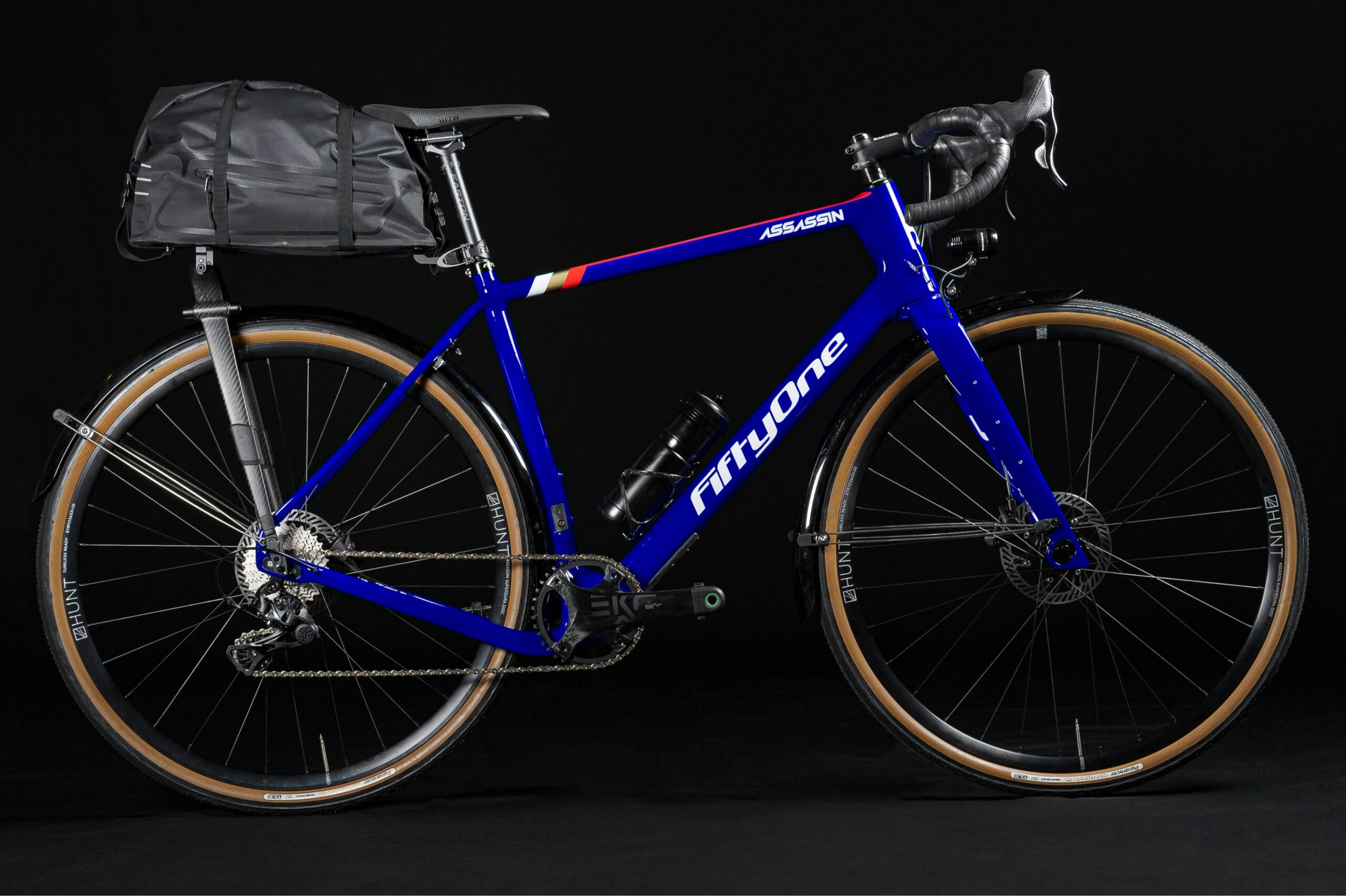 When it comes to accessory mounts, the Assassin is one of the best-equipped carbon gravel bikes that we’ve seen. As Aidan put it, the extra accessory options didn’t require a ton of additional engineering, so why not do it? Between the option to mount a front and rear rack, and the fork leg mounts, the Assassin is rated to carry up to 30kg of cargo. And that’s not including the bottle mounts inside the frame, on the bottom of the down tube, and the top tube bag mount. There are also mounts for full fenders with a removable seatstay bridge. 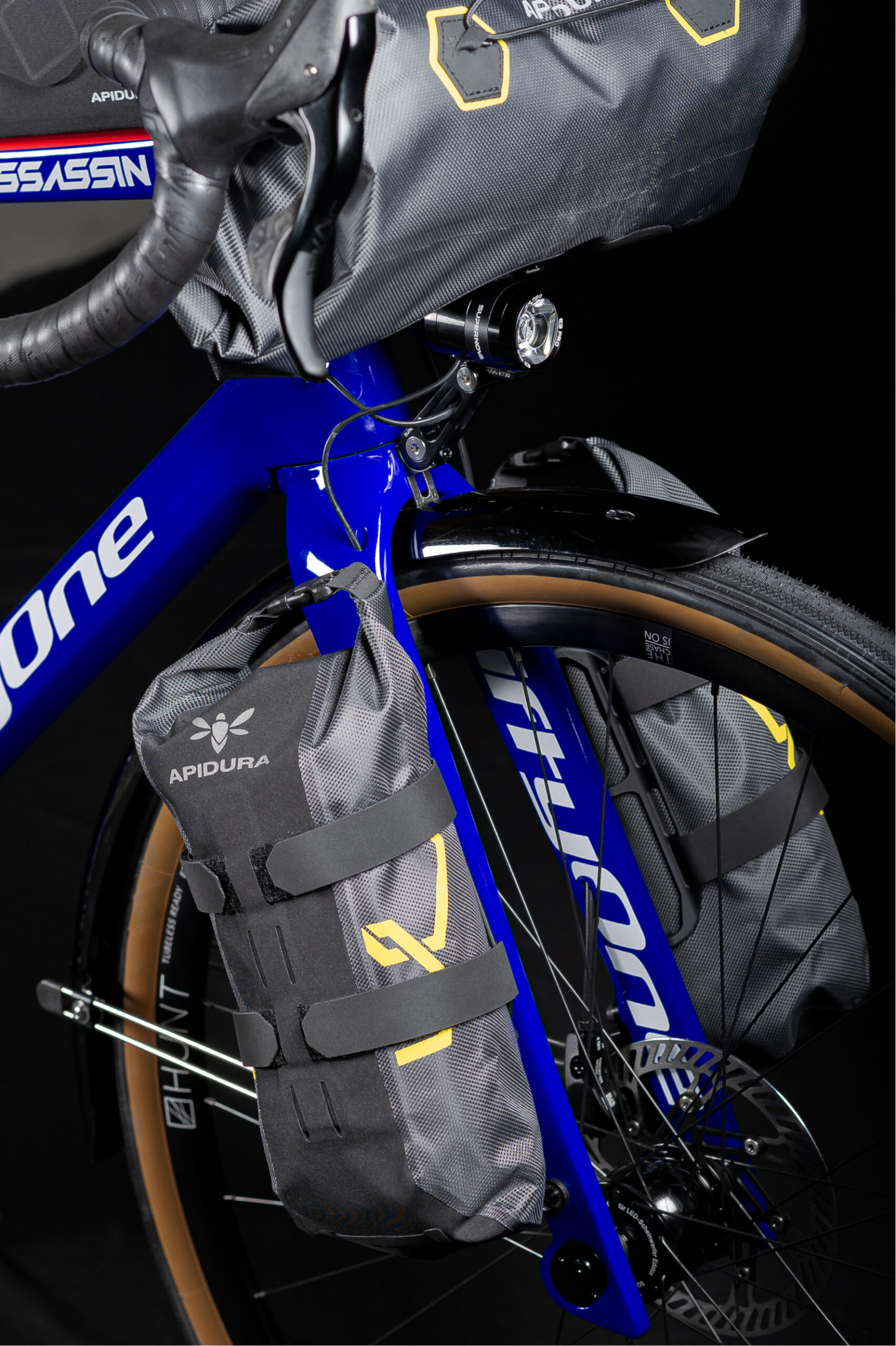 And for those really long rides where you’d rather not have to find a plug to recharge your lights? The fork has internal dynamo routing molded in. 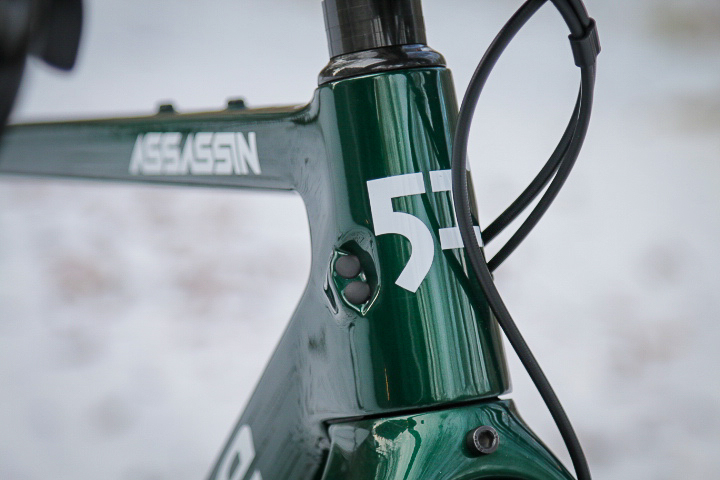 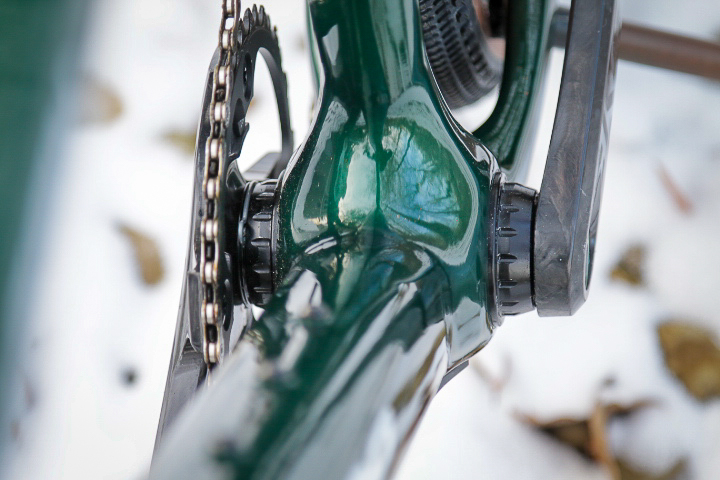 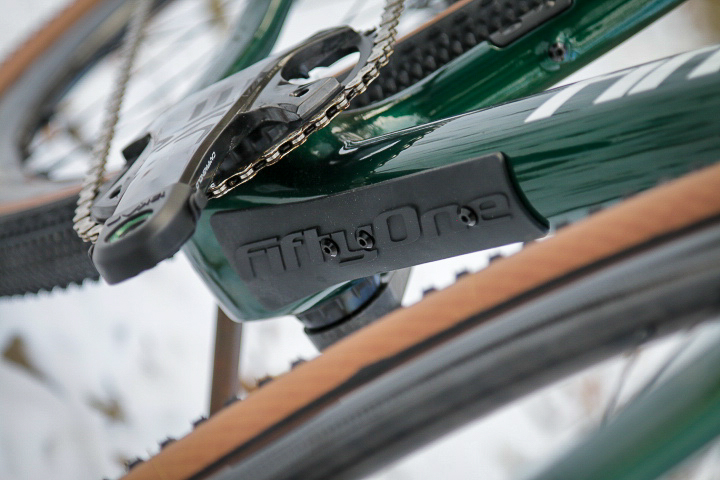 The cleverness extends to the component selection as well. You can run Di2 with a dropper post (meaning there’s storage for the battery that’s not in the seat post). You can also choose between 1x or 2x with up to 50x34t chainrings, thanks to a removable front derailleur plate. And going with bottom bracket trends, the frame uses a T47 threaded BB shell. If you remove the molded downtube protector, you’ll find access to the inside of the frame including the Di2 battery mount on the back of the protector. 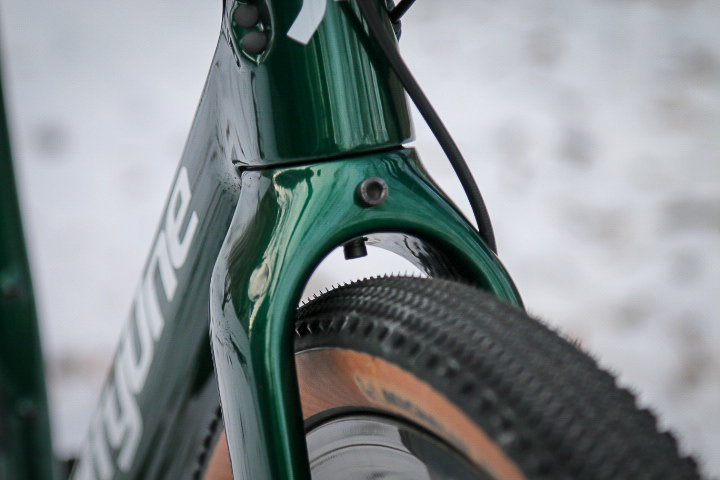 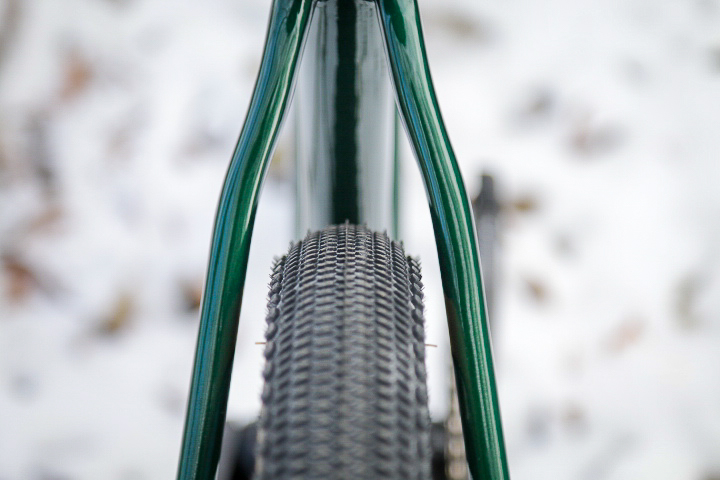 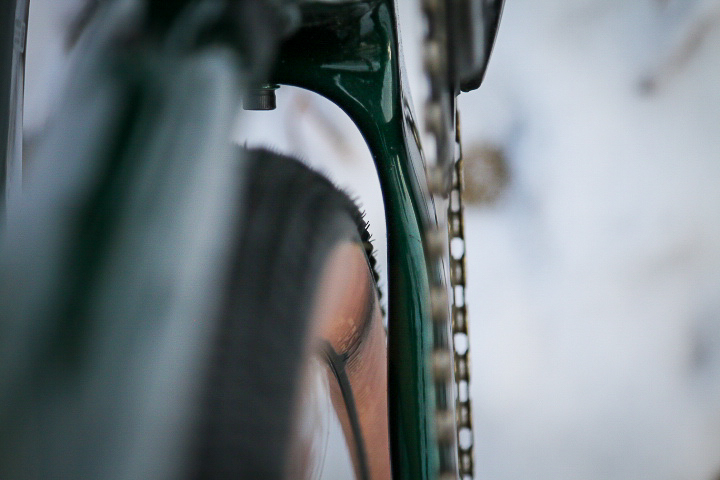 When FiftyOne claims that the Assassin will clear a 47mm tire, what they really mean is clearing a 47mm tire with plenty of mud clearance to spare. I wouldn’t be surprised if you could fit 50mm tires in this frame and fork, though it would obviously not be endorsed by FiftyOne Bikes. 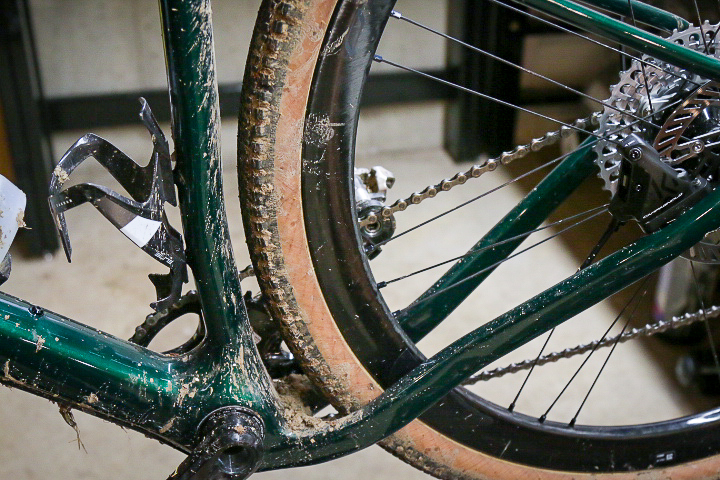 To get that clearance with plenty of room for the chainrings, the frame uses a dropped chainstay design, with both sides featuring equal drop.

Origins of the Assassin name (as explained by FiftyOne Bikes)

In 1910 the Tour de France tackled the high mountains for the first time, with not one but four high passes in the Pyrenees, including the mighty Col du Tourmalet, in a single stage of over 320km and 6000m. At that time, every road was gravel and those in the mountains were especially rough. 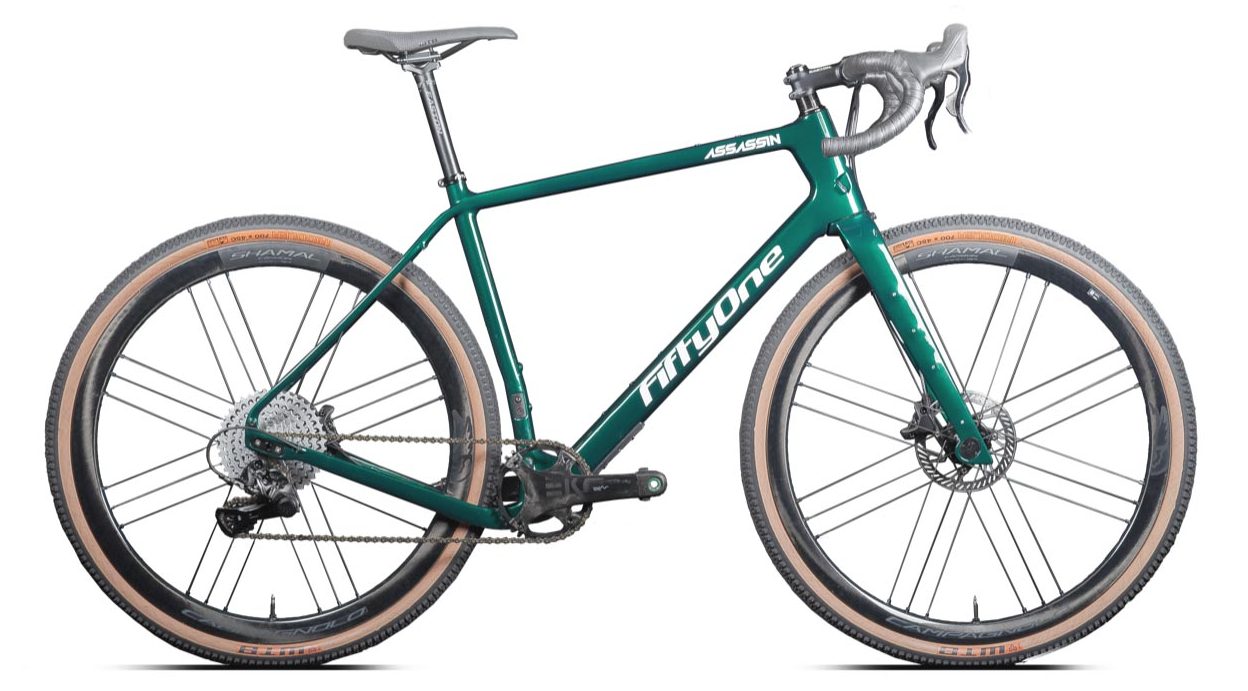 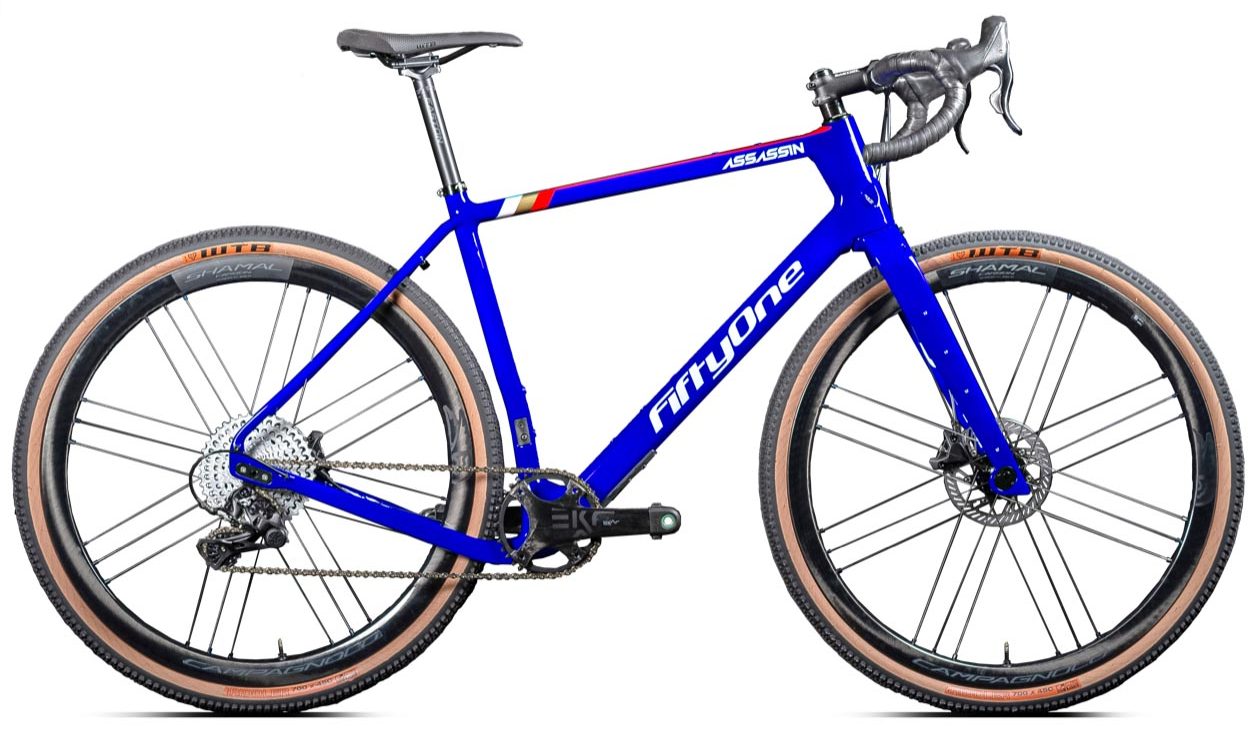 The first run of Assassins will be offered in two gorgeous colors: British Racing Green, and the Rothmans Racing-inspired Blue. If those don’t do it for you, FiftyOne will also offer a full custom paint option for an additional fee.

Available as a frameset or complete builds, pricing starts at €3,499 for the frameset. That’s fairly pricey for the frameset, but complete bikes will start at €4,500 (about $5,000). FiftyOne will be offering complete 1x or 2x builds in Shimano and SRAM, and Campagnolo Ekar 1x, all with 700c wheels and tires. We’re told that at the time of launch, there will be availability with more bikes and additional build options available in 2022. 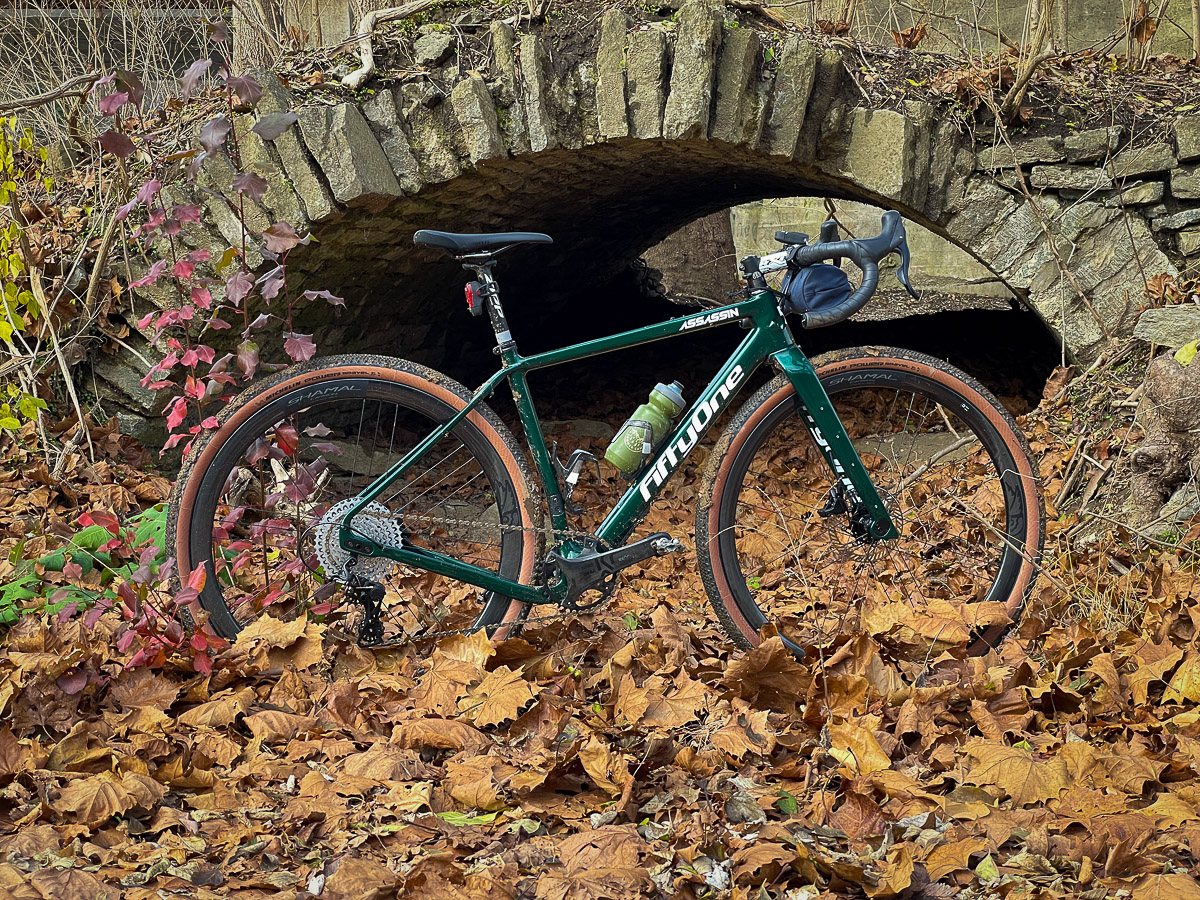 Naturally, I was pretty excited when Aidan asked if I’d be interested in checking out the Assassin before the launch. To get the best impression, I made sure to keep myself in the dark on the details before I had ridden it a few times. Delays in customs meant that it didn’t show up until last week, but I’ve gotten a handful of rides on it so far—enough to qualify as first impressions.

When it came to picking a size, comparing it directly to the Otso Warakin Ti that I have been riding the most lately, I was stuck in the middle. The reach numbers of the Assassin are 375mm for the small or 395 for the medium, while the Otso is 381. I ended up with the small Assassin, which fits great—just with a 90mm stem. If I did it again, I think I would request the medium and use a shorter stem to get the most out of the modern geometry concept. I tend to like longer bikes, and if anything, this seems to echo what we’ve seen in the world of mountain bikes where riders can choose sizing based on preferred reach rather than seat tube sizing. Note that also like mountain bikes, the seat tubes on the Assassin are relatively short to allow room for a dropper, with the XL running just a 53cm seat tube. 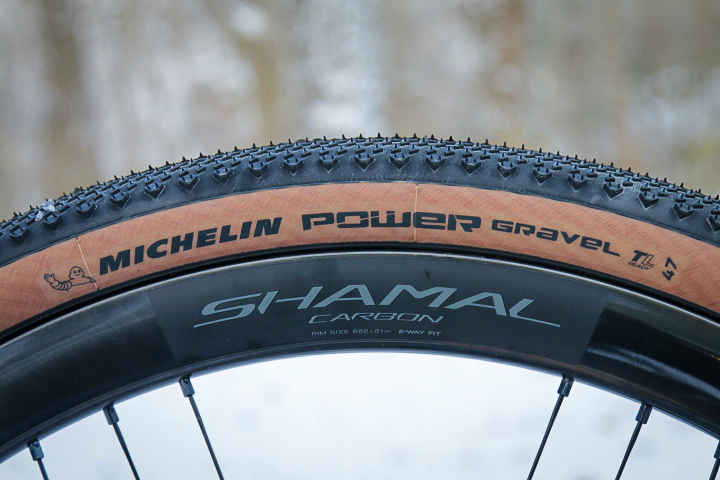 My test bike shipped out with Michelin Power Gravel 700c x 47mm tires, which I was excited to try out. My first rides quickly indicated that this wasn’t my favorite combination though—however, I think most of what I was feeling was tire squirm due to running a true 47mm tire on a fairly narrow rim with a 21mm internal width. I wanted to try out the larger tires on wider rims, but at the moment my options for a Campy N3W compatible wheelset are extremely limited. 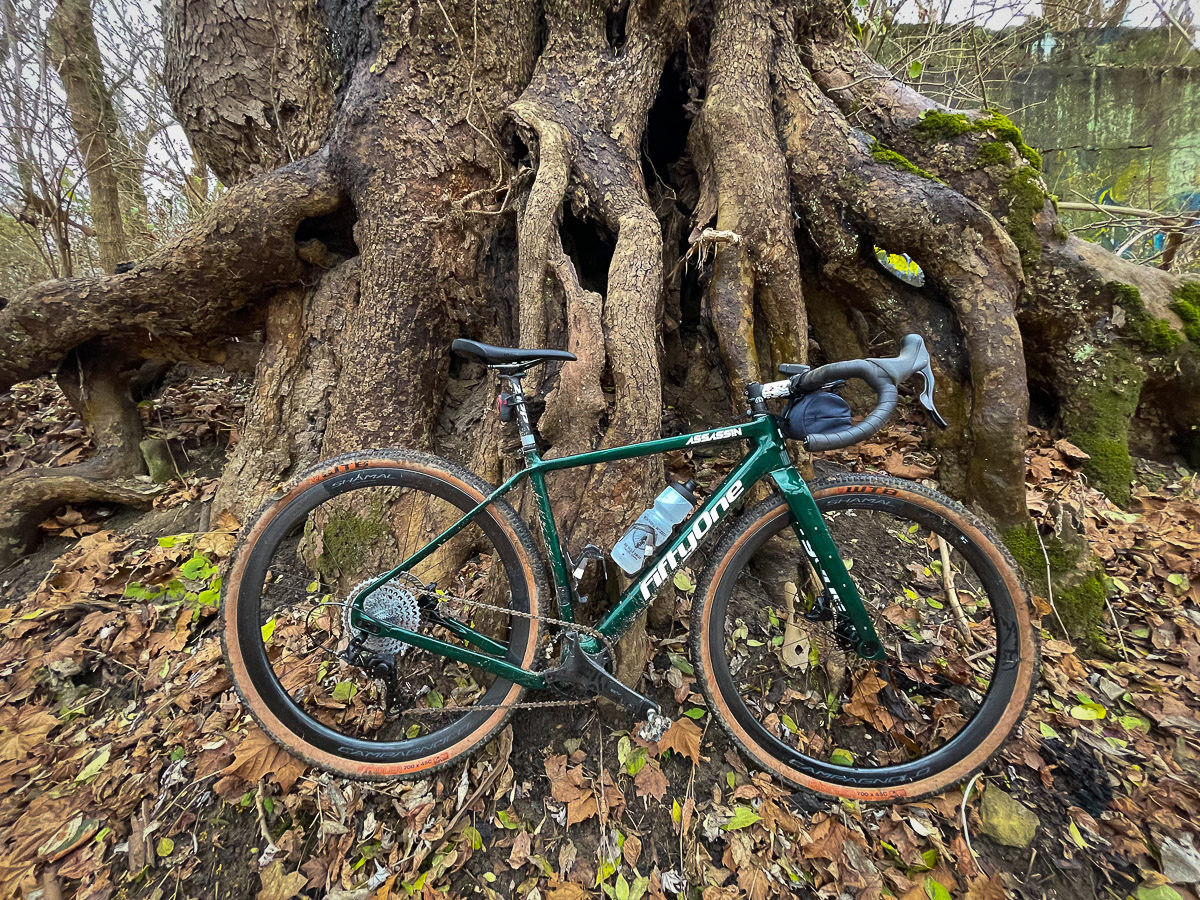 To get a better impression of the bike, I swapped the tires out to a known quantity with 700c x 45mm Riddlers. With the 45mm tires fitted, the bike handled better in the Low setting for the technical riding I was doing, though either worked (swapping the front is quick and easy to do mid-ride, just make sure you have a 2.5mm & 6mm allen wrench). That seems to be in line with what FiftyOne claims, the Low/87.49mm Trail position will be better for bigger tires (45mm and above), while the Hi/75.95mm Trail position will be better for the smaller tires (45mm and below)—not necessarily because of the tires themselves, but what you’ll be doing on them. The Low setting will provide a more stable feel on rugged terrain, while the Hi setting yields a more road bike-like feel with faster handling.

Even with the shorter reach of the small frame, the Assassin feels decidedly composed on technical terrain. On only its third outing, I was confident enough to hit trails I ride all the time faster than ever. Yet on the road, the Assassin is no slouch. You might look at the dropped chainstays and slender seat stays and think otherwise, but the frame is very efficient in putting the power down (I’m sure the Shamal Carbon wheels don’t hurt). You know, as much as it can be with 45 or 47mm rubber. 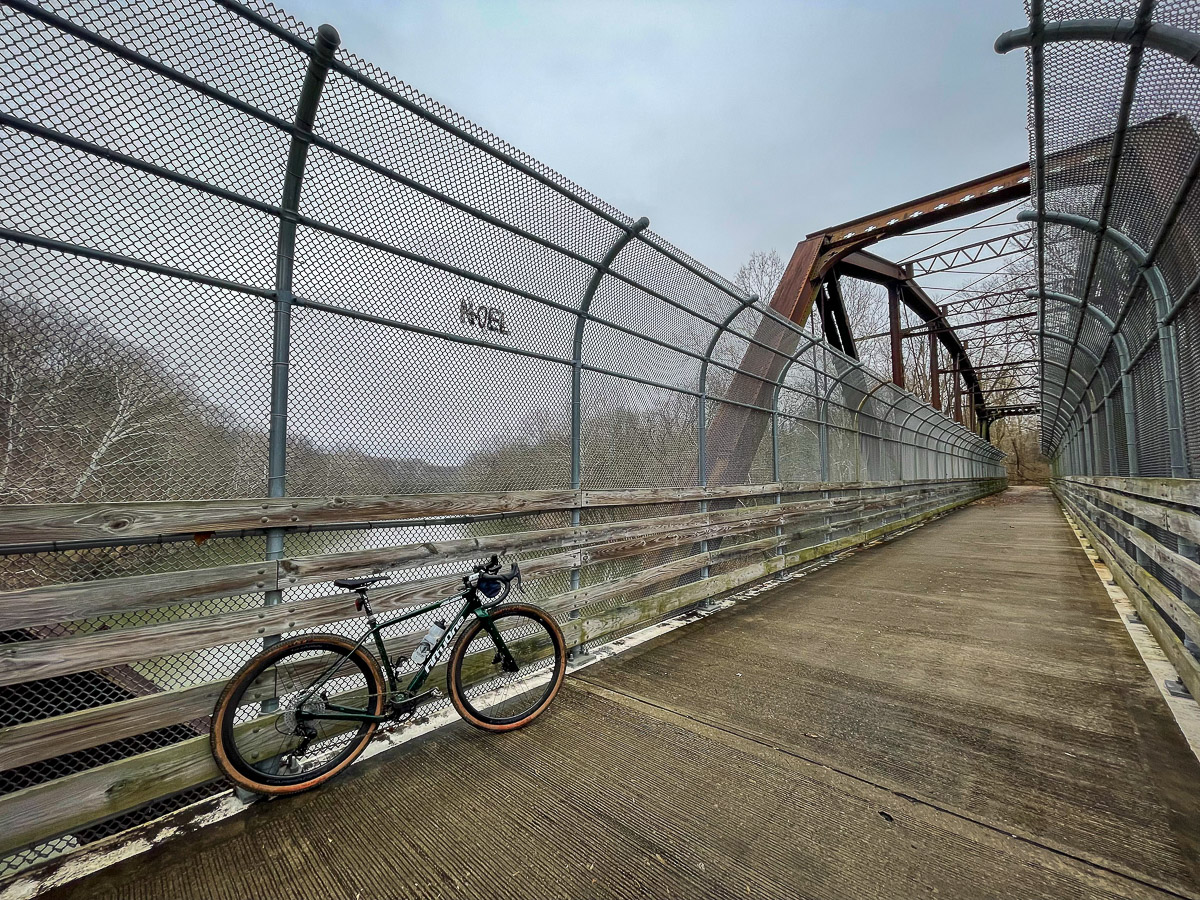 There are a lot of different things to think about with this bike, so the final review will take some time. But from the outset, the Assassin seems like a great design that can be built into your ideal gravel bike. Whatever that may be.