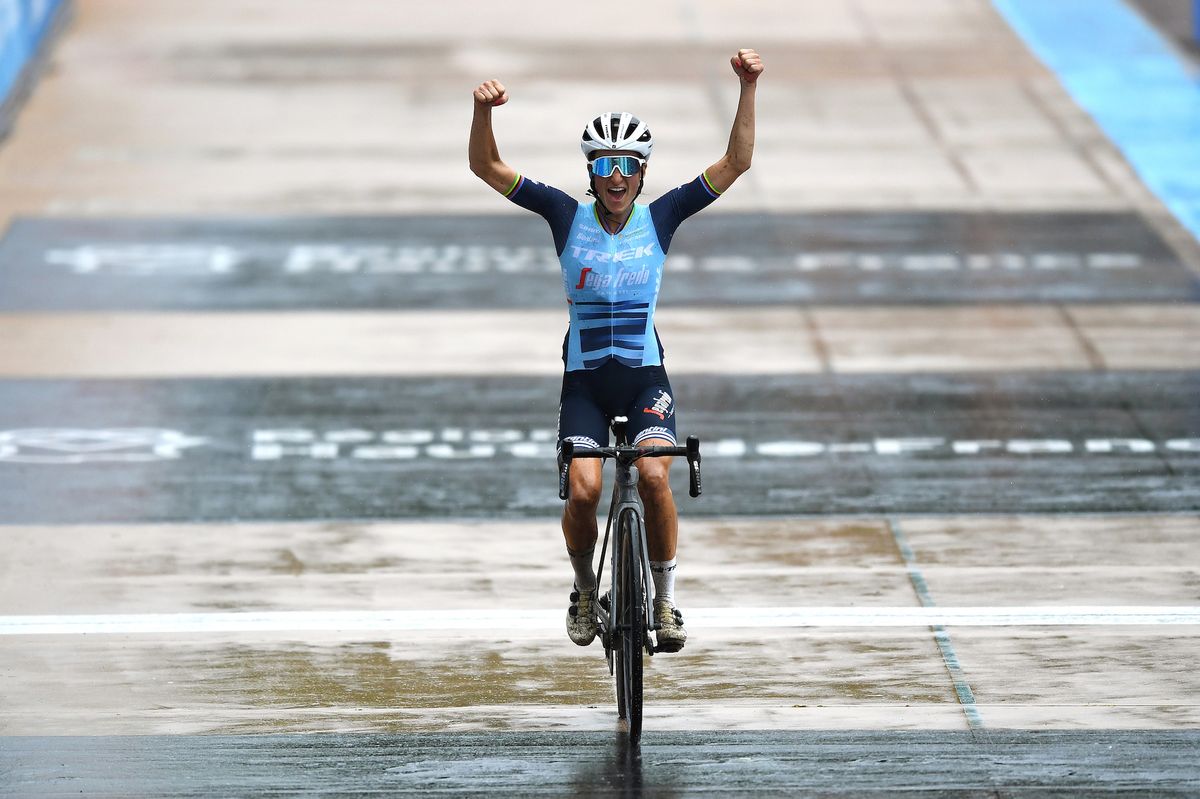 With cancellations and rescheduled races, the 2021 Women’s WorldTour season was another truncated by COVID, but that didn’t stop the series bringing us some exciting racing. Here we’ve picked six of the most exciting and interesting days, spread between March and October, proof, if it were needed of another vintage year.

We all love a bit of crosswind action, right? With its pan flat coastal roads and mid-March place on the calendar, we can more or less guarantee that’s what we will get at Brugge – De Panne. And this year’s race didn’t disappoint.

One of the longest races on the calendar, no sooner had the peloton rolled out of Brugge than a couple of riders were up the road, but they, and other small moves were never allowed any space, and the whole bunch entered De Moeren – an especially windy section of flatlands – as one.

The second time through here SDWorx put the race in the gutter, and only 12 women emerged into a tail wind section. With a number of teams represented with more than one rider, the group worked well, and such was the chaos behind they were never likely to be caught.

On her own in the leading group Grace Brown (BikeExchange) knew she wouldn’t out sprint the likes of Kirsten Wild (Ceratizit-WNT), Lotte Kopecky (Liv Racing) and Jolien D’hoore (SDWorx) so, with 10km to go she attacked hard.

While the group looked around to see who would chase, the Australian soon had a gap. But, in what was a hugely tense final, the Australian’s that lead was never more than 25 seconds, and it tumbled as sprinters’ team mates went to work. In the end though, Brown hung on, winning by just seven seconds.

The pandemic made sure this year’s Amstel Gold Race was like no other, with the entire race happening on the local circuit around Valkenburg, close to the Dutch city of Maastricht.

Though two riders escaped early on the first of seven laps, the race soon descended into chaos, as a group of 20 caught the leaders the second time up the Bemelerberg. This break didn’t last long though, Anna van der Breggen (SDWorx) bridging with Grace Brown.

After the race re-formed there was a brief period of calm, only for Annemiek van Vleuten (Movistar) to attack on the race’s signature climb, the Cauberg, with just over two laps to go. Wearing her European champion’s jersey Van Vleuten was unable to get a gap and it was Grace Brown and Pauliena Rooijakkers (Liv Racing) who emerged, the pair staying together onto the final circuit.

The Dutch rider was dropped on a descent, and with a lead of 30 seconds it seemed Brown might pull off a second solo win. However, desperate work from both Trek-Segafredo and SDWorx brought the Australian to within touching distance as the final ascent of the Cauberg loomed.

In what was a dramatic final 2000m, Brown was caught by a rampant Van Vleuten, but Kasia Niewiadoma (Canyon-SRAM) never her let her get away, and with Trek-Segafredo’s Elisa Longo Borghini caught her and rode off into a winning position.

However, in an odd twist, when Niewiadoma brought back an attack by the Italian the latter refused to work, and despite the polish woman’s imploring the pair were caught with only 300m remaining, and a 10 woman sprint was on the cards.

Marianne Vos knew she was the fastest sprinter in the group, going clear and raising her hands early in celebration, only for her smile of joy to fade for an anxious moment after SDWorx’s Demi Vollering pushed her close, Vos eventually winning by a tiny margin.

Since its inception in 2017 the women’s Liège-Bastogne-Liège has always provided entertaining racing, though many were unaware as the early editions were not televised. With good coverage this year we witnessed a masterful team victory and a changing of the guard at the top of the sport.

With an early break caught, SDWorx sparked a dynamic race, sending riders up the road and making their way into a number of breakaways. And it was the Dutch team’s then world champion Anna van der Breggen who made the race with a scintillating attack on the Côte de la Roche aux Faucons.

Marianne Vos has never won Liège and missed the group of six created by the rainbow jersey, but worked hard to get back on, though just as she did Van der Breggen went again, creating a five woman group which would contest the win.

Van der Breggen led the group for every one of the closing 13km, selflessly leading out team mate Demi Vollering, who capped off a stunning team performance winning the first of four WorldTour victories in 2021, and placing a hand on SDWorx leader’s baton for the first time.

Head to head battles between Annemiek van Vleuten and Anna van der Breggen, come around once a year at best, and they are invariably enthralling. Adept in the mountains and against the clock, the Dutch pair have similar skillsets and have been the most dominant women of recent years.

This year’s clash of the titans came on the fourth and final day of the season’s first WorldTour stage race, the Vuelta a Burgos Feminas, on the final ascent to Lagunas de Neila.

Van der Breggen began the day sixth on GC, two seconds behind overall leader and team mate, Niamh Fisher-Black, indeed SDWorx had four women in the top eight, with Van Vleuten just behind, only five seconds off the lead.

SDWorx set the pace on the final climb, chasing a huge breakaway which began to fall apart, though two women remained ahead inside the final two kilometres. After Demi Vollering brought the final two escapees back, she was dropped leaving the two Dutch masters alone into the final 500m, with then world champion Van der Breggen resolutely stuck to the front.

Van Vleuten seemed to be struggling, and her task was made more difficult as the road curved round to the left and her rival, still looking strong, stuck to the nearside barrier, forcing her compatriot to take the long way round.

When the Movistar rider finally made her move Van der Breggen had time to respond and easily out sprinted the older woman, taking the stage and adding another GC title to her impressive palmarès.

Over its 23 editions the Simac Ladies Tour has consistently defied the somewhat uninspiring Dutch terrain and served up a dish of gnarly, entertaining racing, and this year’s penultimate stage was one of gloriously entertaining chaos.

After a stunning time trial Marlen Reusser (Alé-BTC Ljubljana) led the GC by 10 seconds from Chantal van den Broek-Blaak, and it was the SDWorx rider who kicked off the chaos. The former world champion escaped with Ellen van Dijk (Trek-Segafredo), the two Dutch women building a small gap.

Short of team mates Reusser was very much on the back foot, but chased them back only for Anousker Koster to get away alone. With their teams controlling, then reducing the advantage, Van den Broek-Blaak and Kasia Niewiadoma bridged across when the gap was small enough, taking Koster’s Jumbo-Visma team mate Marianne Vos with them.

Even with Marta Bastianelli now there to help, Reusser could not close the gap, but was given  hope when a counter attack brought the leaders within touching distance, making for a nail biting final.

However, the leaders were three of the best and even had time to finesse. Niewiadoma attacked early on the dig to the line, however, no one was likely to match Vos and she took the stage by two seconds, while Van den Broek-Blaak put 21 seconds into Reusser, taking third on the day and the GC.

After years of waiting, grasping at every tiny hint of progress, the women’s Paris-Roubaix was finally announced as part of the rejigged 2020 WorldTour calendar. Anticipation was further increased when the pandemic caused its cancellation. Twice. But in October it finally happened.

And what a race.

At only 116km some it was too short, but it was hugely entertaining, despite not a lot happening for the opening 30 kilometres. On the first cobbled sector, more than 80km from the famous velodrome, Lizzie Deignan, staying safe at the front, found herself with a gap, and taking her opportunity, she forged on alone.

What followed was a masterclass on many levels. Each time someone chased, one of Deignan’s Trek-Segafredo team mates was there too. Despite crashes they infiltrated every group, causing it to falter. Meanwhile at the front the Brit ploughed on.

Only inside the final 20km was Marianne Vos able to break the Trek-Segafredo stranglehold, attacking and taking chunks out of Deignan’s lead. But it was not to be, as Roubaix grew closer, Vos began to falter and her deficit began to grow. Eventually, Deignan won by 1.17, one of the best rides you are ever likely to see earning her a place in history.