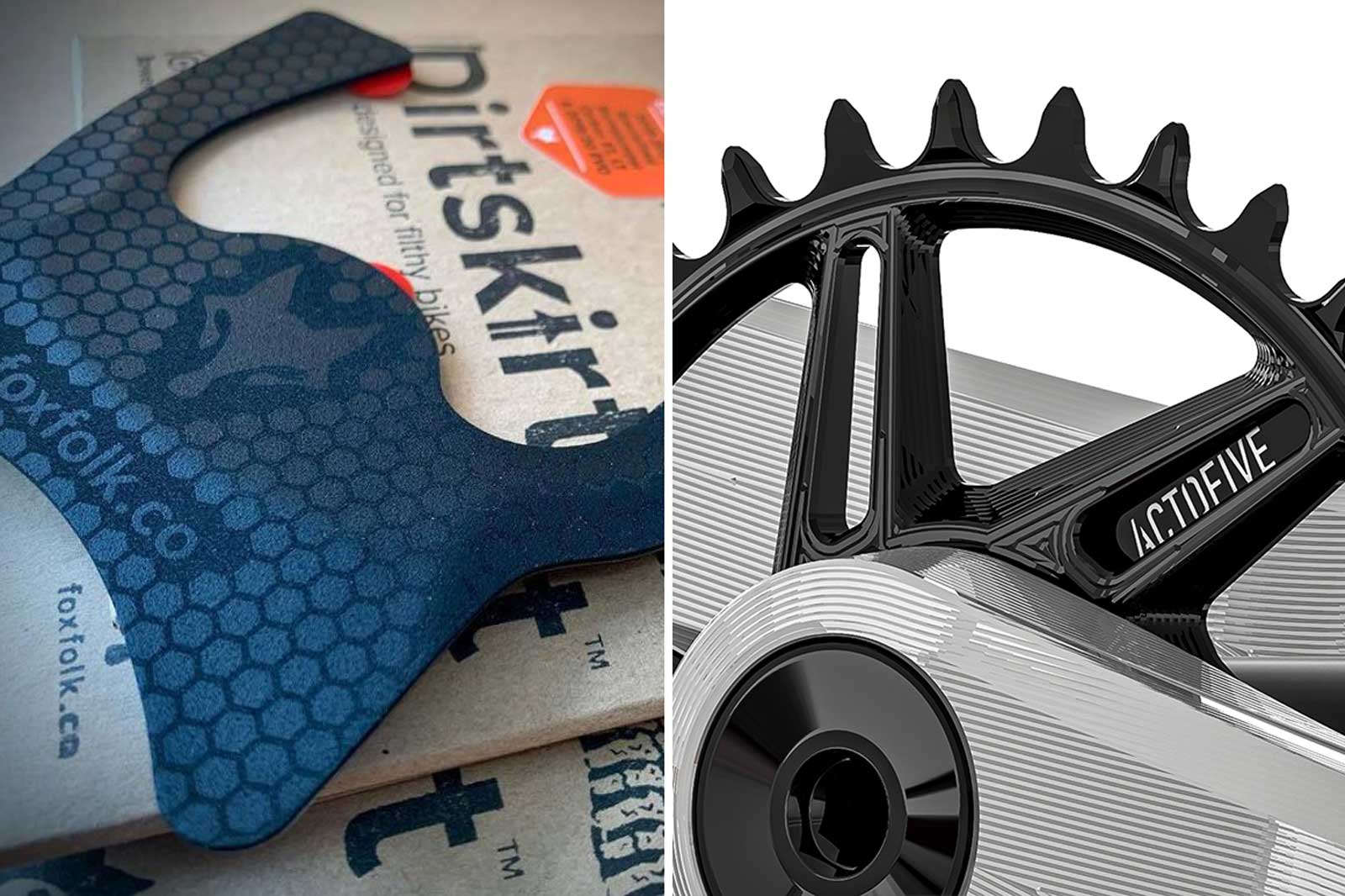 Welcome to Bikerumor’s Sneak Peeks, where we bring you the latest bikes and technology we’ve found floating around the web and socials. This stuff is fresh, so new it’s likely not available, or even official. From prototypes to concepts, these sneak peeks are a glimpse into the future… 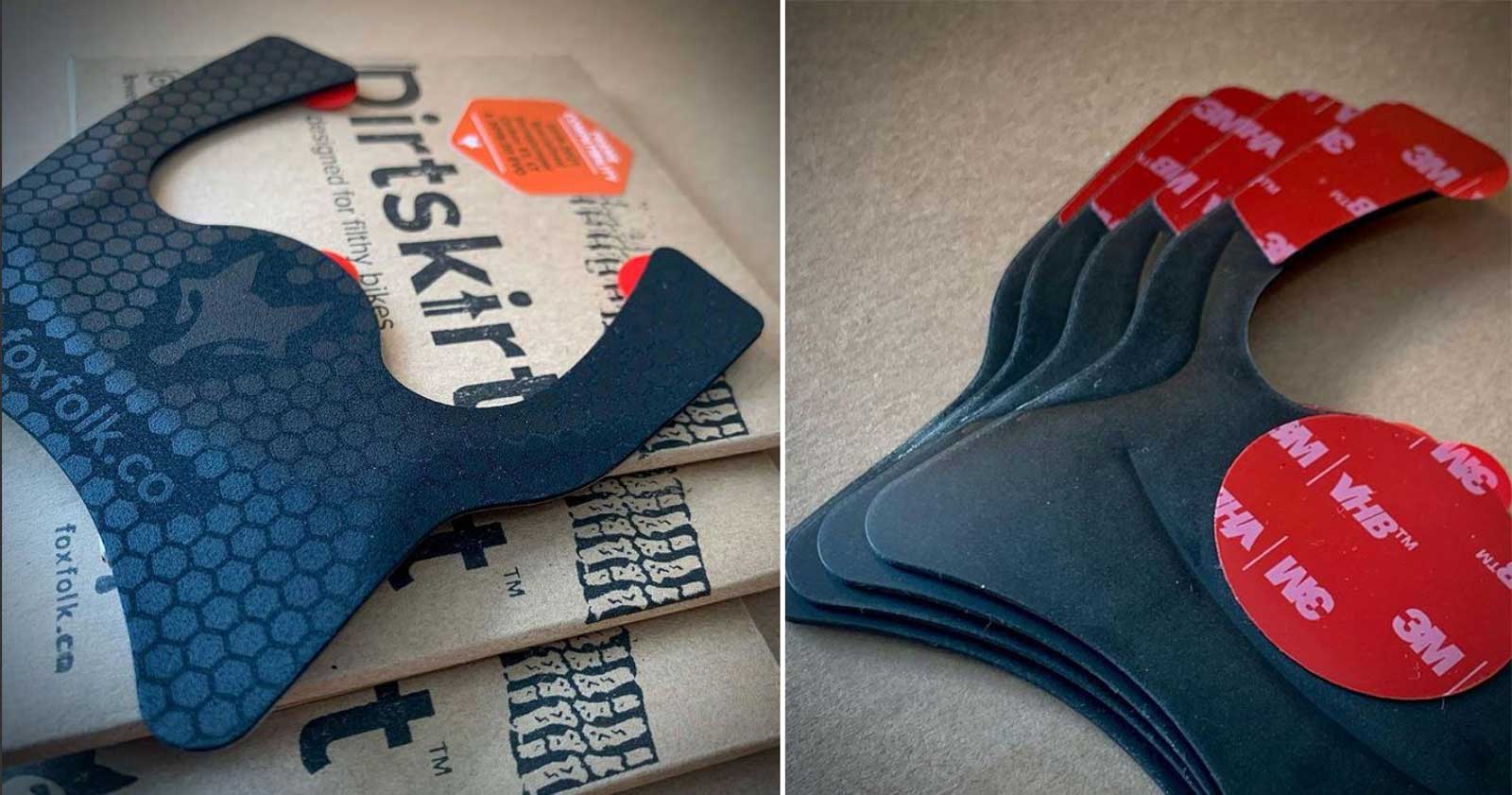 Fox Folk is a new company based out of Queenstown, New Zealand, set to debut with the Dirtskirt lower-link frame protector for full suspension mountain bikes. With so many bikes suffering from the classic malady “loam shelf”, I imagine there’ll be heaps of you interested in getting your hands on one of these. My Revel Rail is one such bike, with the rear-face of the lower link now decorated with a variety of small-to-medium sized paint chips. 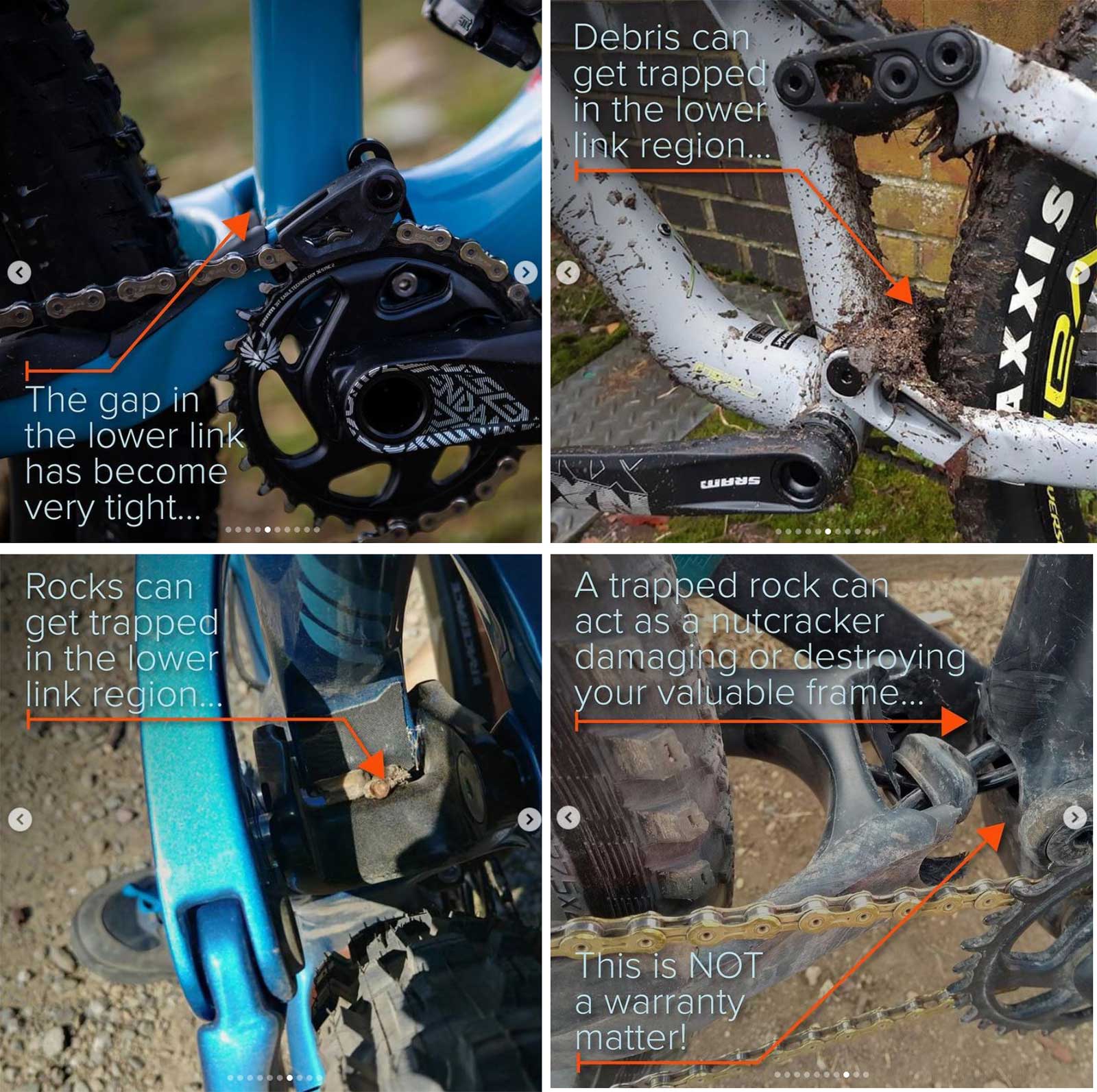 Using the Specialized Stumpjumper EVO as a prime example, Fox Folk set out to engineer a frame protector that would prevent the lower linkage effectively becoming a nutcracker.

The Dirtskirt is specifically designed to completely eliminate the build up of trail debris and stones in the lower link gap, protecting your frame from paint chips and worse. After 186 prototypes and 18 months of R&D, the Dirtskirt is ready. The final product makes use of the highest density EVA foam available on the market, as this gives the best impact absorption properties but is still malleable enough to conform to the shape of the swingarm-seat tube interface as the bike is pushed through its rear wheel travel. The acetate layer on the underside of the EVA foam is key to that, allowing the Dirtskirt to return to its original shape as the bike returns to the sag point and ultimately, top-out. 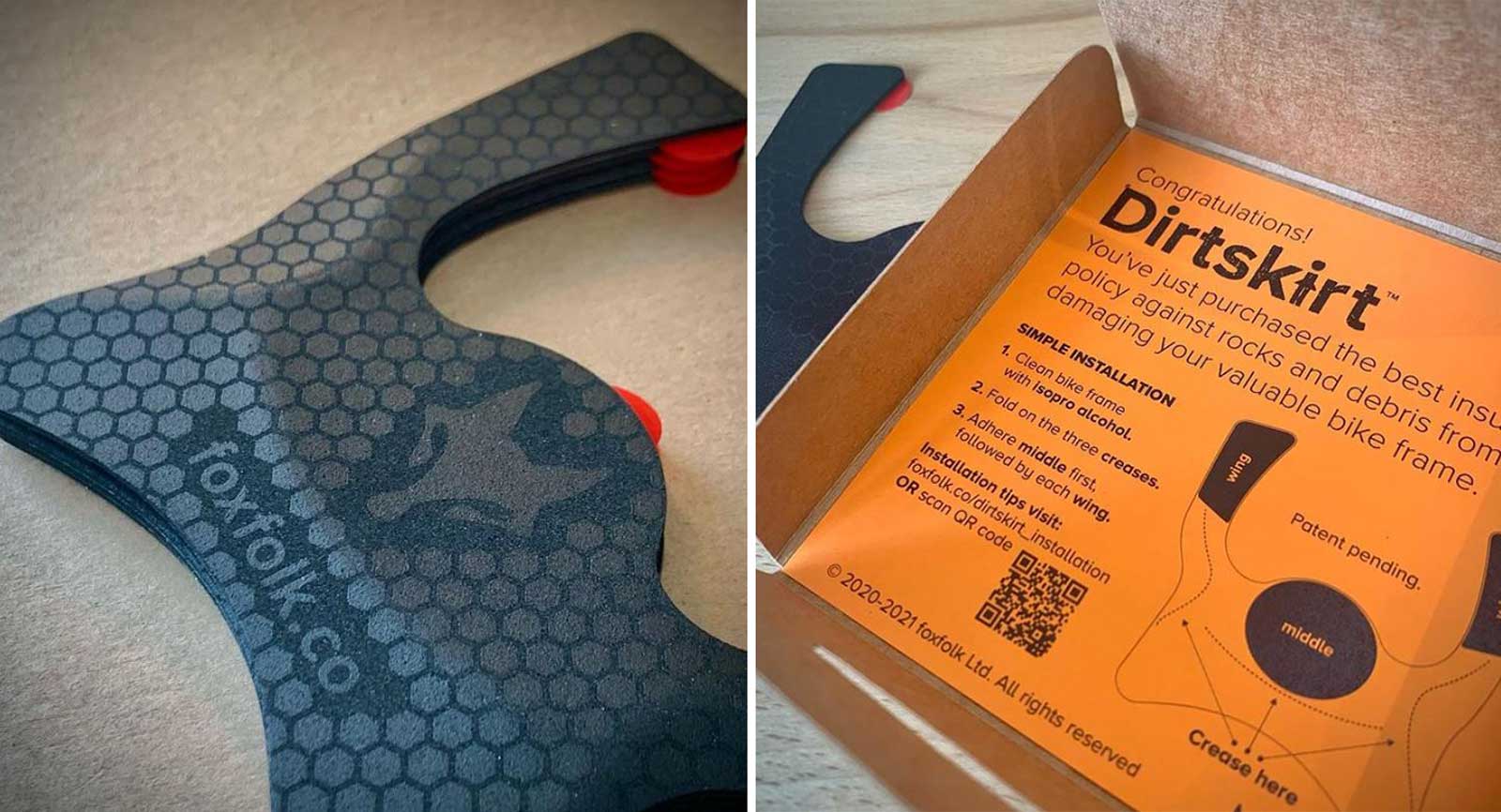 Launch date for the Dirtskirt is pretty rough, suggested as January 2022. We’re waiting to hear back from Fox Folk for more info on frame compatibility, pricing and availability. 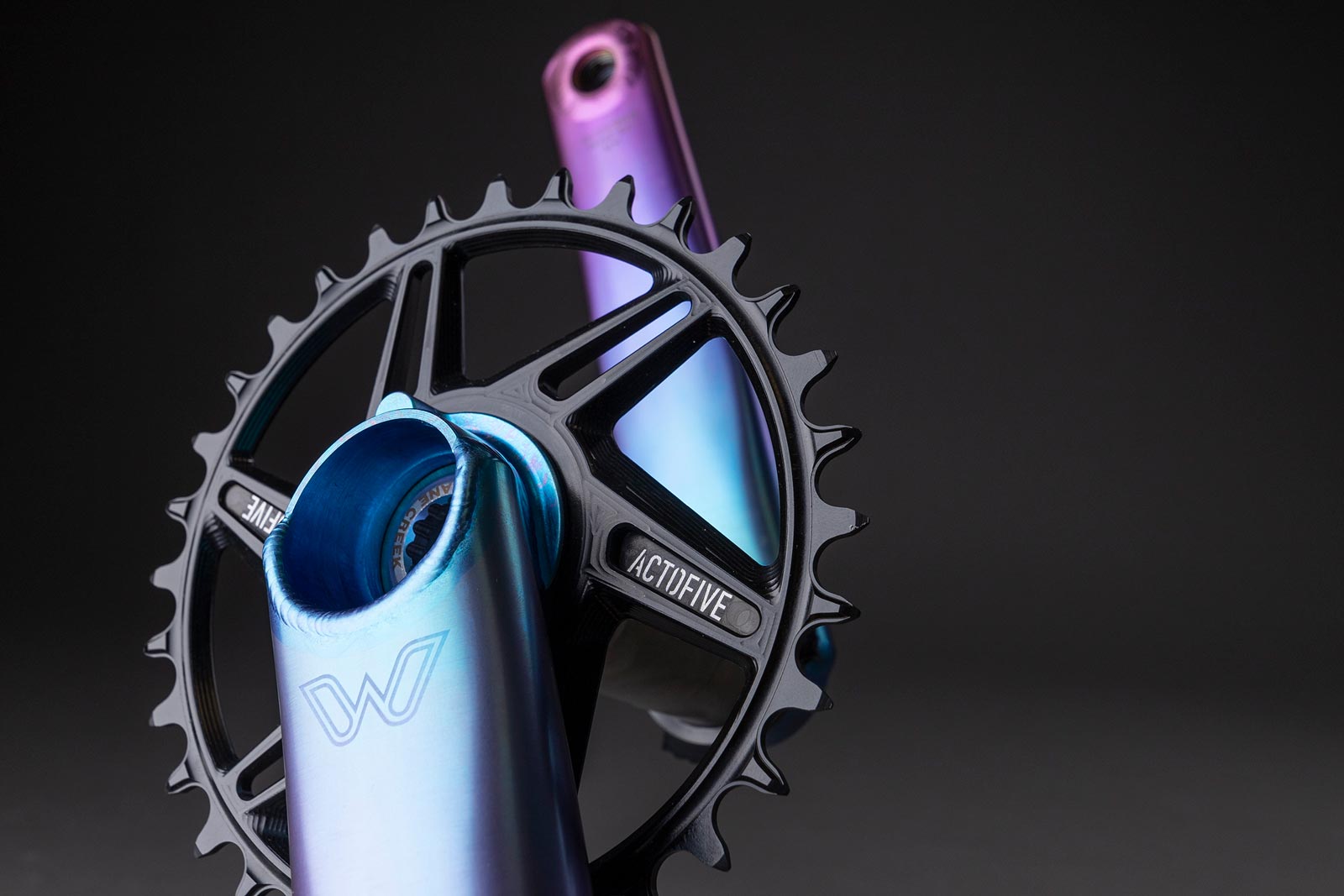 Actofive, famed creators of the P-Train CNC High-Pivot MTB, recently released a signature chainring precision machined from 7075-T6 alloy. Like the bike, the chain-wheel is made at the Actofive HQ in Germany. It is compatible with SRAM and Race Face Cinch direct mount, and is available in 30T or 32T with a 3mm (BOOST) or 6mm chainline. Yes, it’s just another chainring… the more interesting news here is that, when Actofive shared images of the chainring, they also shared a sneak peek of their CNC-Machined prototype crankset that is in the works. 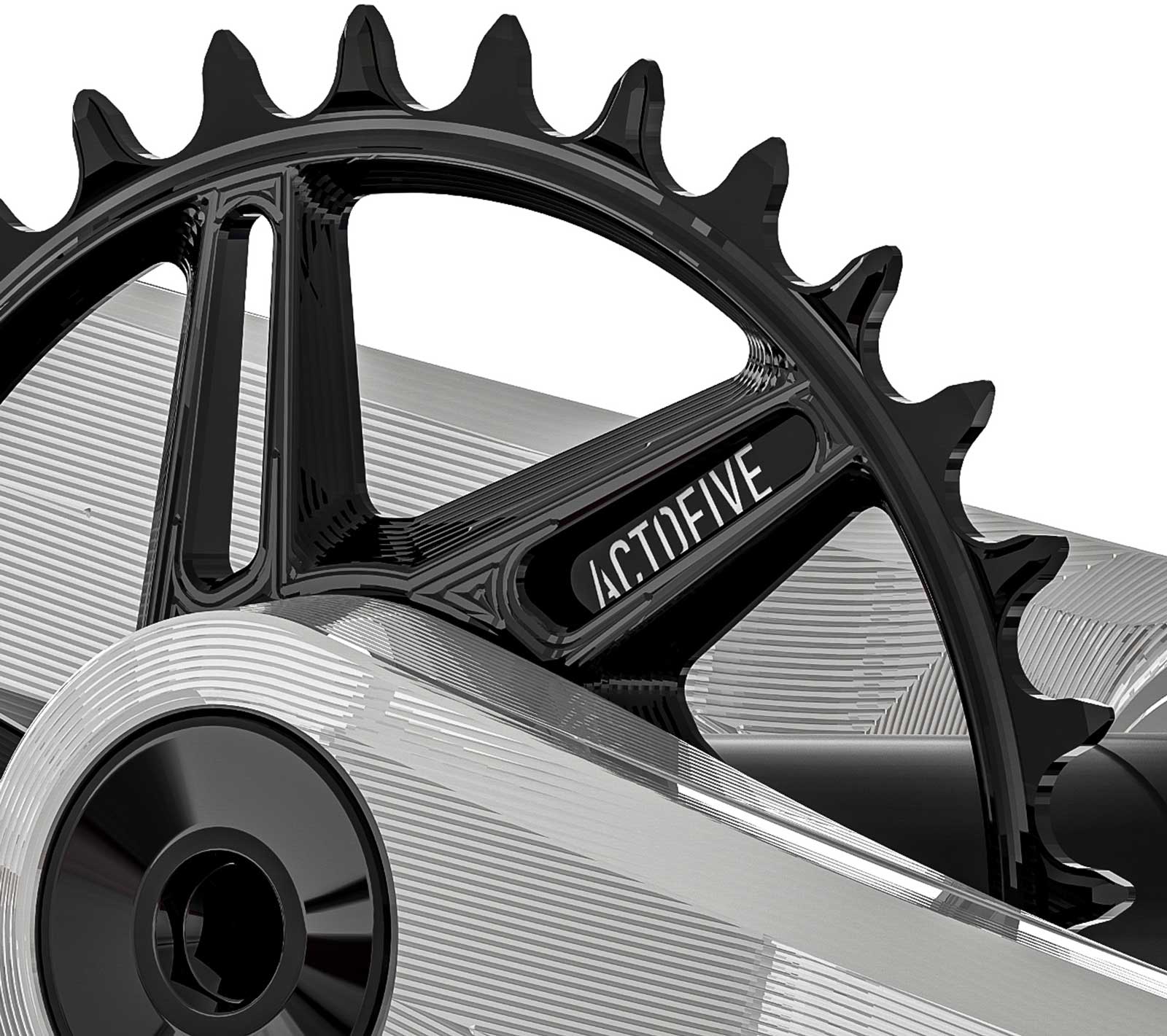 OK, it is simply a render, but Simon Metzner has confirmed to us that he is developing a full CNC’d crankset, the target weight of which is sub 500g including the chainring. “The architecture of the crank is based on my knowledge of bonding frames, which means it is made of two thin shells bonded together” – Simon Metzner. Actofive plan to produce a long and short spindle version for MTB and Gravel. The spindle will be SRAM DUB compatible but there will be a 30mm option also. Stock colors will be silver or black anodized, but Actofive will offer custom colors at a premium. No word on actual availability dates or pricing just yet.

Left; the Original Frankenstein made from a butchered Commencal Meta AM, Right; the Esquive Franky 2 steel frameset components

2021 delivered more high-pivot mountain bikes than you can shake a metaphorical stick at. The trend continues into 2022, with eMTB brands and multiple small fabricators getting in on the action. Bavaria-based Esquive Bikes aren’t just jumping on a band wagon, however. Their high-pivot Franky mountain bike is about to enter its third generation of prototyping. Since the original Franky, the aim was always to have a 100% rearward axle path, with the rear axle never travelling higher than the main pivot position.

“If Frankenstein hadn’t built a monster but a bike, it would probably have looked exactly the same, which is why the first bike was called Franky” – Christophe, co-founder of Esquive Bikes. 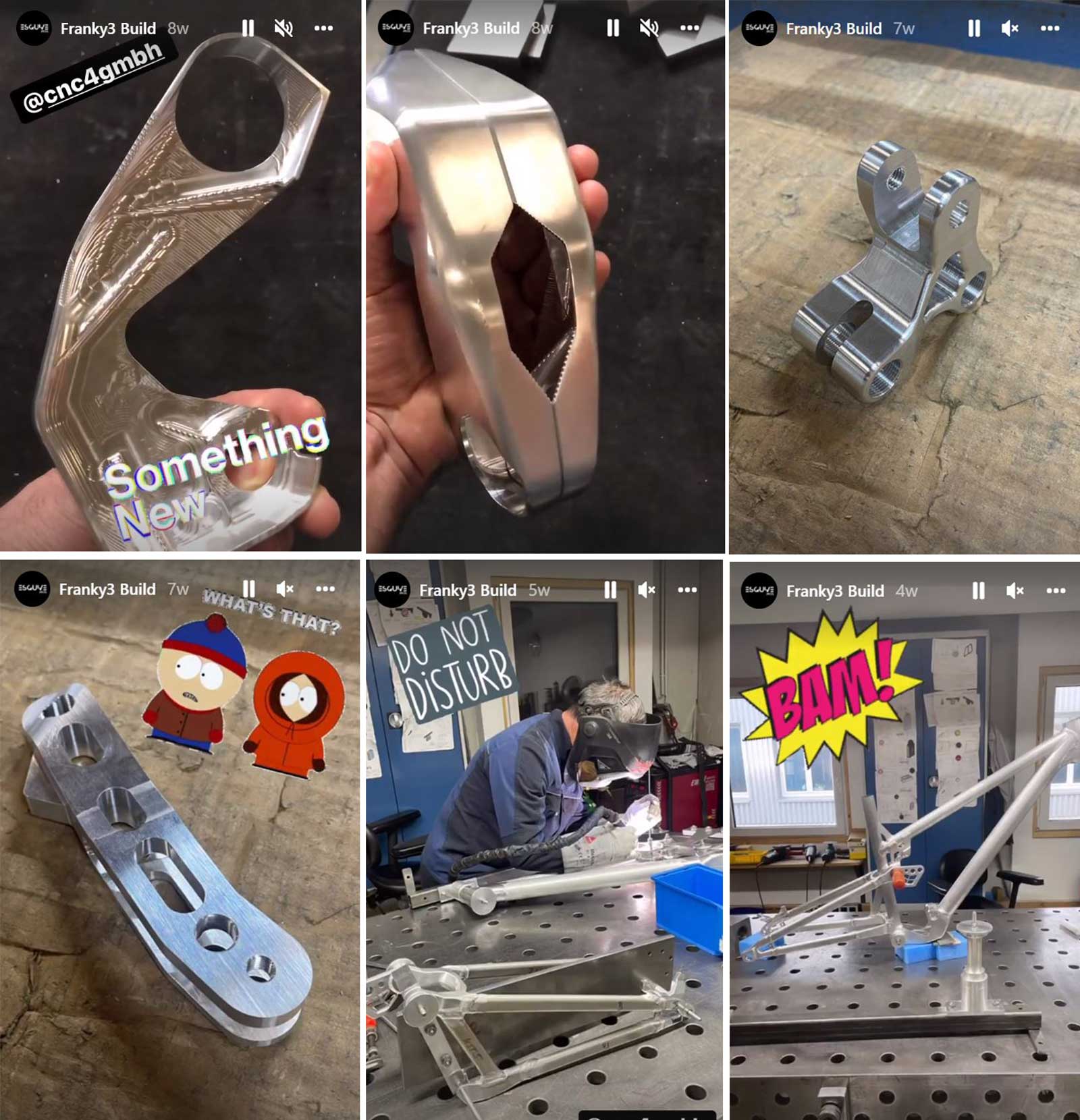 While the Franky 2 frameset was made entirely from steel. Budget constraints meant Esquive were unable to source complex milled parts, so they fabricated this second prototype from off-the-shelf steel tubing and laser cut steel plates. Now, the Franky 3 brings Esquive Bikes closer to production than ever with the new CNC-Machined frameset. The switch from steel to alloy has shaved a whopping 1500g.

29″ wheels, a steep seat tube angle, slack head tube angle, long reach, a high-pivot suspension platform with idler pulley and CNC-Machined everything – the Esquive Franky has all the makings of a bang up-to-date and bang-on trend enduro mountain bike. We’ll be keeping a close eye to see what the future holds for this small Bavarian frame fabricator.