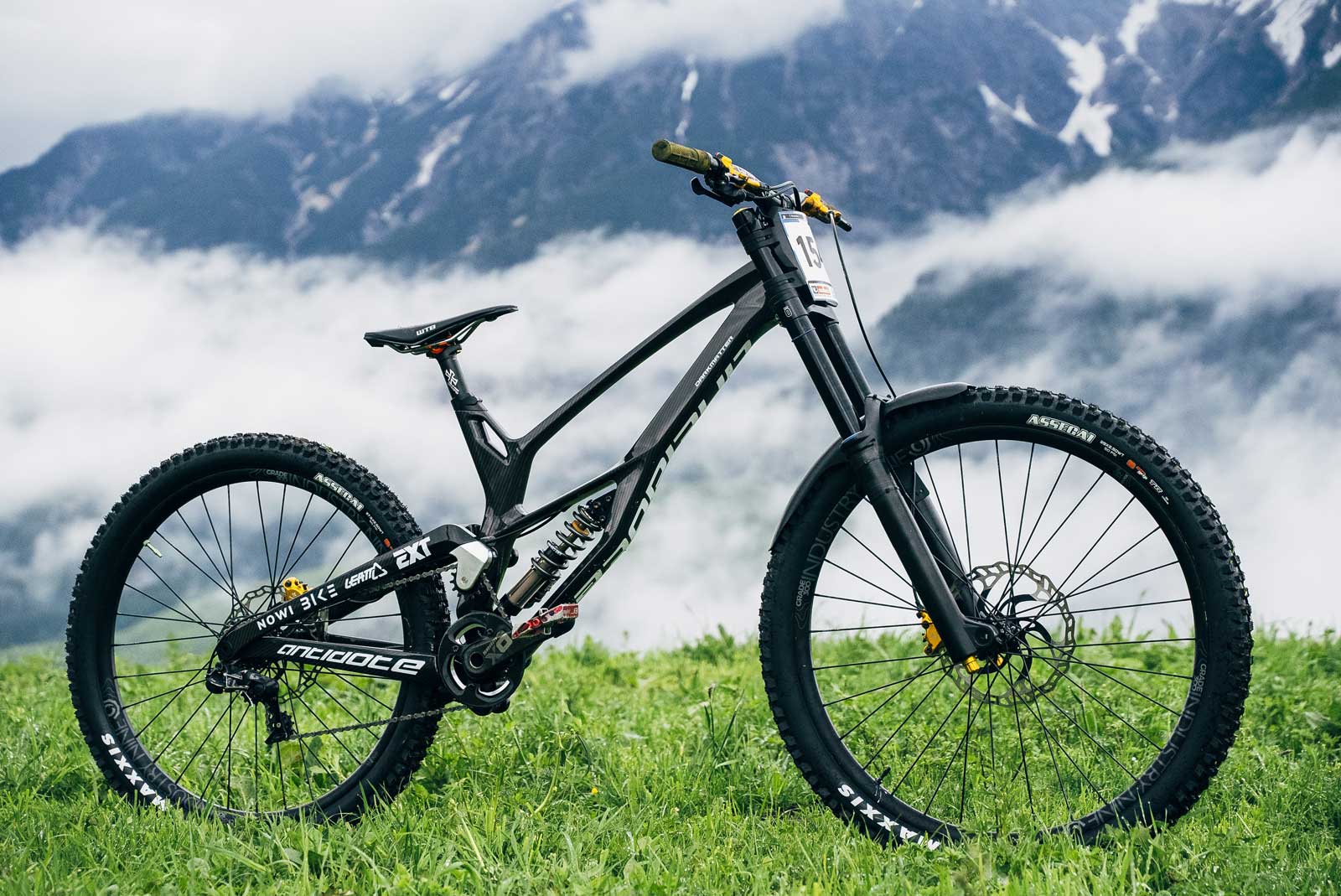 With 29″ wheels now dominating at World Cup Downhill races, Polish carbon mountain bike manufacturer, Antidote, decided it was high time their flagship DH rig received the upgrade. The Antidote Darkmatter 29 is the latest addition to the fleet, replacing its 27.5″ wheeled predecessor, maintaining that split pivot high-pivot suspension layout and drool-worthy aesthetic Antidote are known for. The frame is yours for €4999 with multiple frame and shock options as well as complete builds. 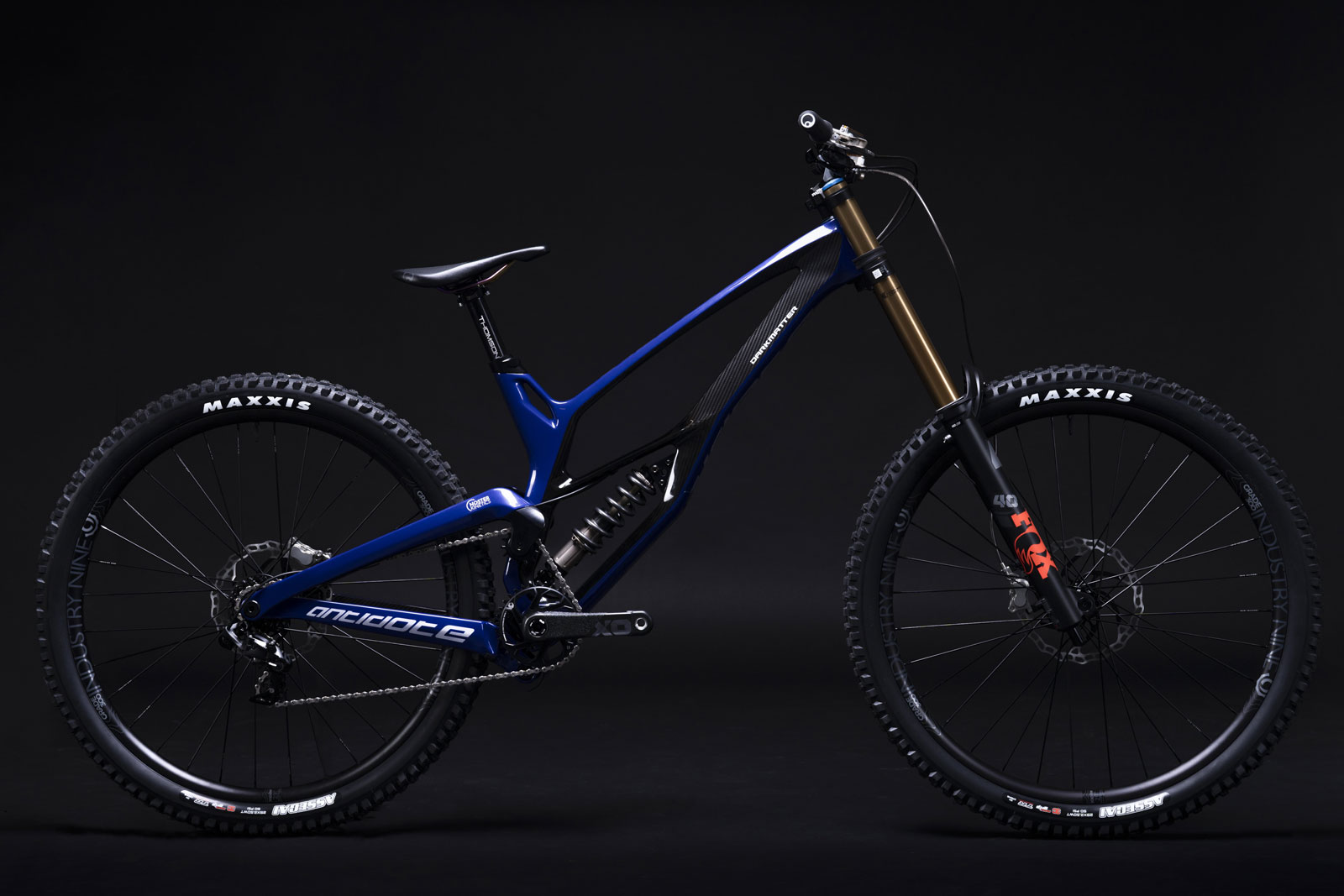 The Antidote Darkmatter 29 was designed with coil shocks in mind, though is also compatible with air shocks

The biggest news for the Antidote Darkmatter is its up-sizing to a 29″ wheelset, but there’s a bit more to it than that. While the 29″ version runs 190mm rear wheel travel, an aftermarket mullet link shortens the rear-end to accommodate a 27.5″ rear wheel, increasing travel to 200mm, matching the fork. Complete bikes are available in 29 only (conversion to the MX setup will set you back a further €199) while the framesets can be purchased in 29 or mullet, with the choice of a press-fit or threaded BB. 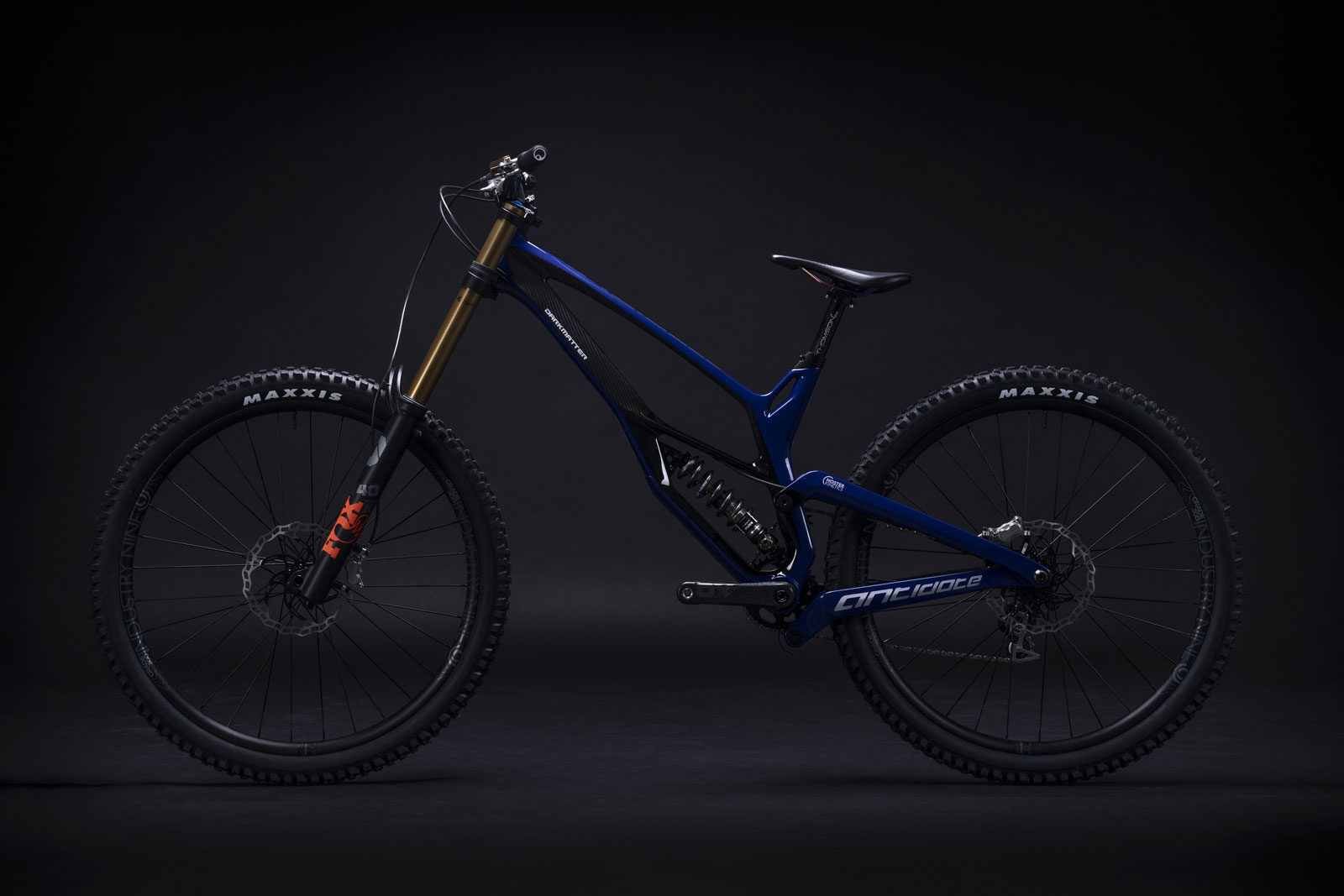 While the Antidote Darkmatter 27.5″ was only available in Medium and Large, the Darkmatter 29 adds an XL option boasting a reach of 505mm

As per all expectation, along with the larger wheelset comes a much longer bike; the large frame boasts a 475mm reach, 449mm rear-centre, 63° head tube angle and a resultant 1287mm wheelbase. One of the big appeals of this bike is its split pivot high-pivot suspension platform, and how that allows for the shock to sit very low keeping the bulk of the bike’s weight centered around the bottom bracket. 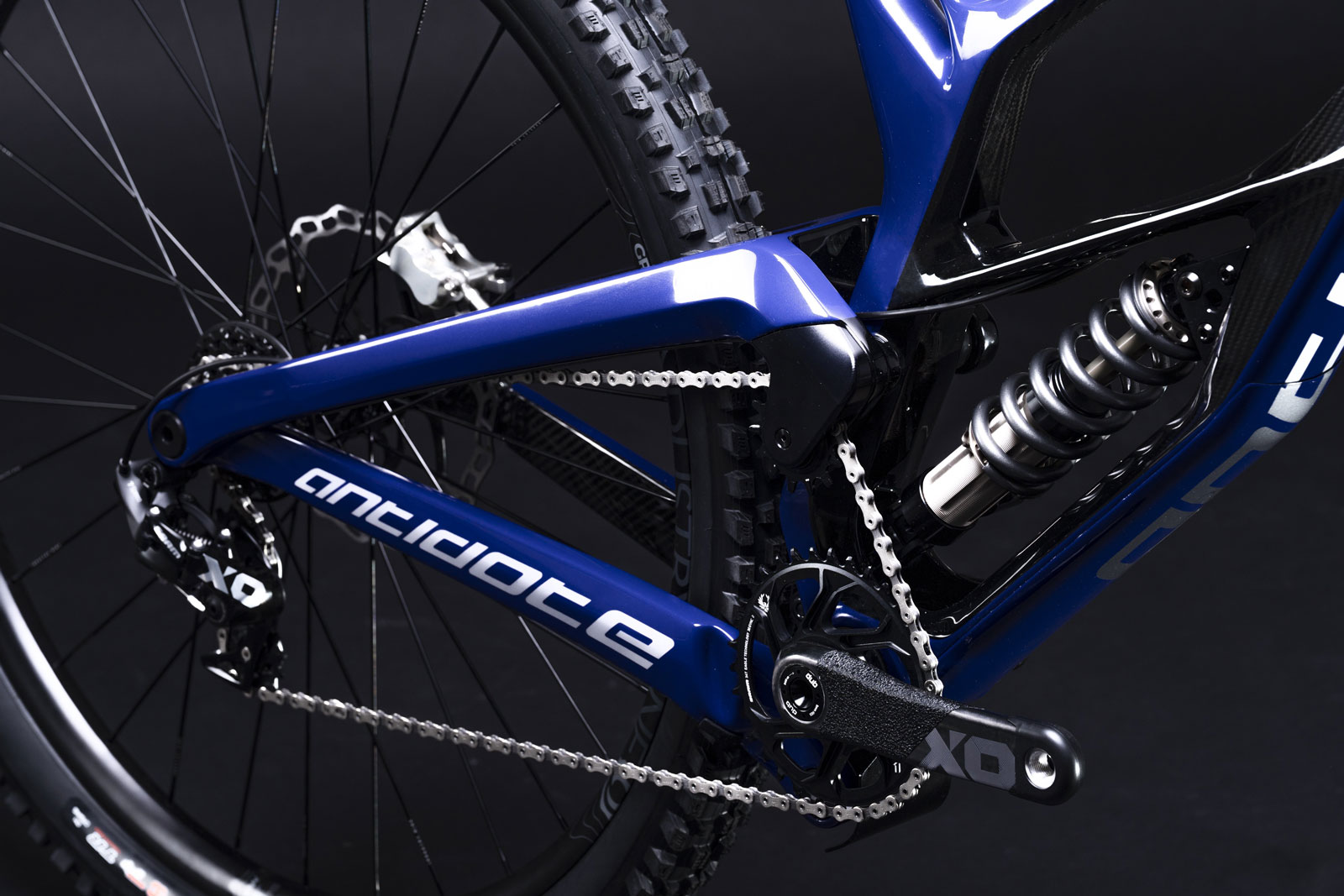 The rear shock of the Darkmatter doesn’t rotate throughout the travel. This is said to result in additional sensitivity and less stress on bushings and bearings, prolonging their life. Antidote also tells us its positioning results in a favorable stress pattern through the frame, reducing stress to the downtube.

With the lower link articulating in a concentric fashion about the BB, the bike enjoys a majority rearward axle path which means that the rear-centre only gets longer as the bike is pushed through its travel. This is most pronounced on the 200mm MX setup, with the rear-centre growing by a whopping 26mm, as opposed to 20mm displacement seen on the 29 setup. 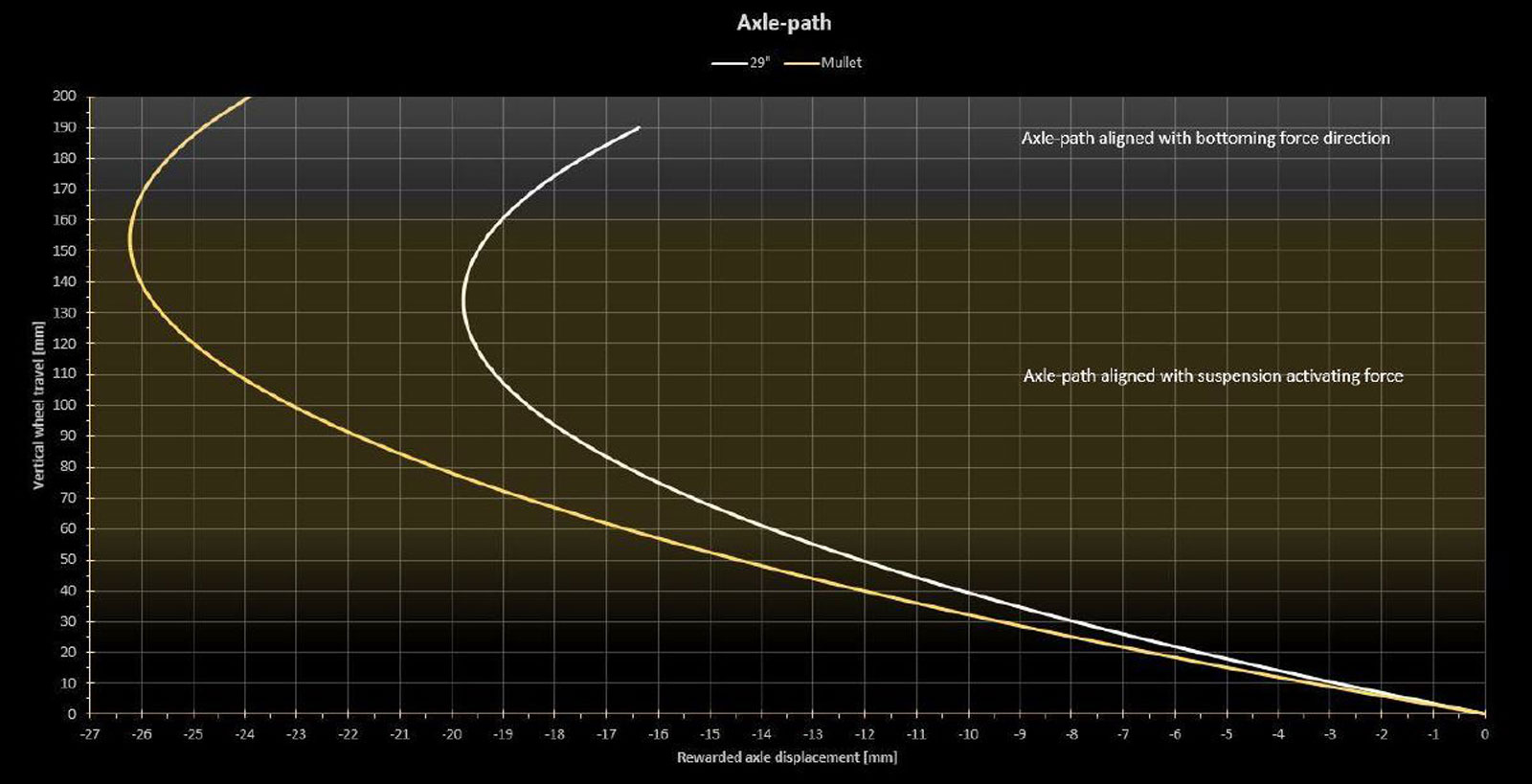 To eliminate unwanted drivetrain forces acting upon the suspension, an idler pulley is necessary to route the chain up and over the upper pivot. The overall layout gives rise to what Antidote call Noster Kinetics. Michał Lachendro, Antidote Suspension Engineer, tells us the new Darkmatter is highly responsive to pedaling, with high anti-rise (100%) and low pedal kickback delivering a bike that will always remain stable, regardless of the terrain. 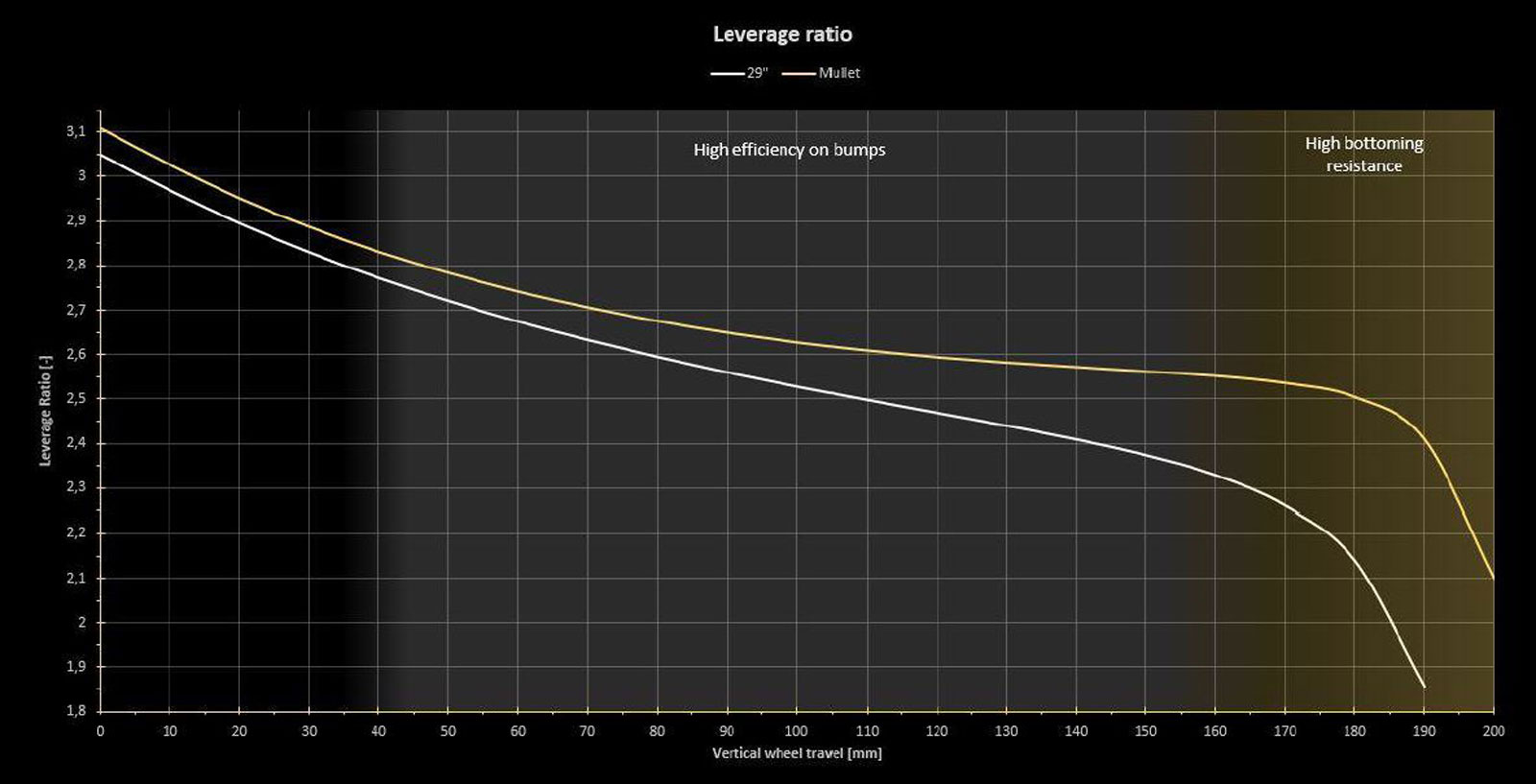 Antidote claim the suspension kinematic is inspired by that of motocross bike, with the leverage ratio featuring an additional super progressive ramp up “beyond the usual progressive characteristics”, said to work perfectly on fast and demanding downhill trails. 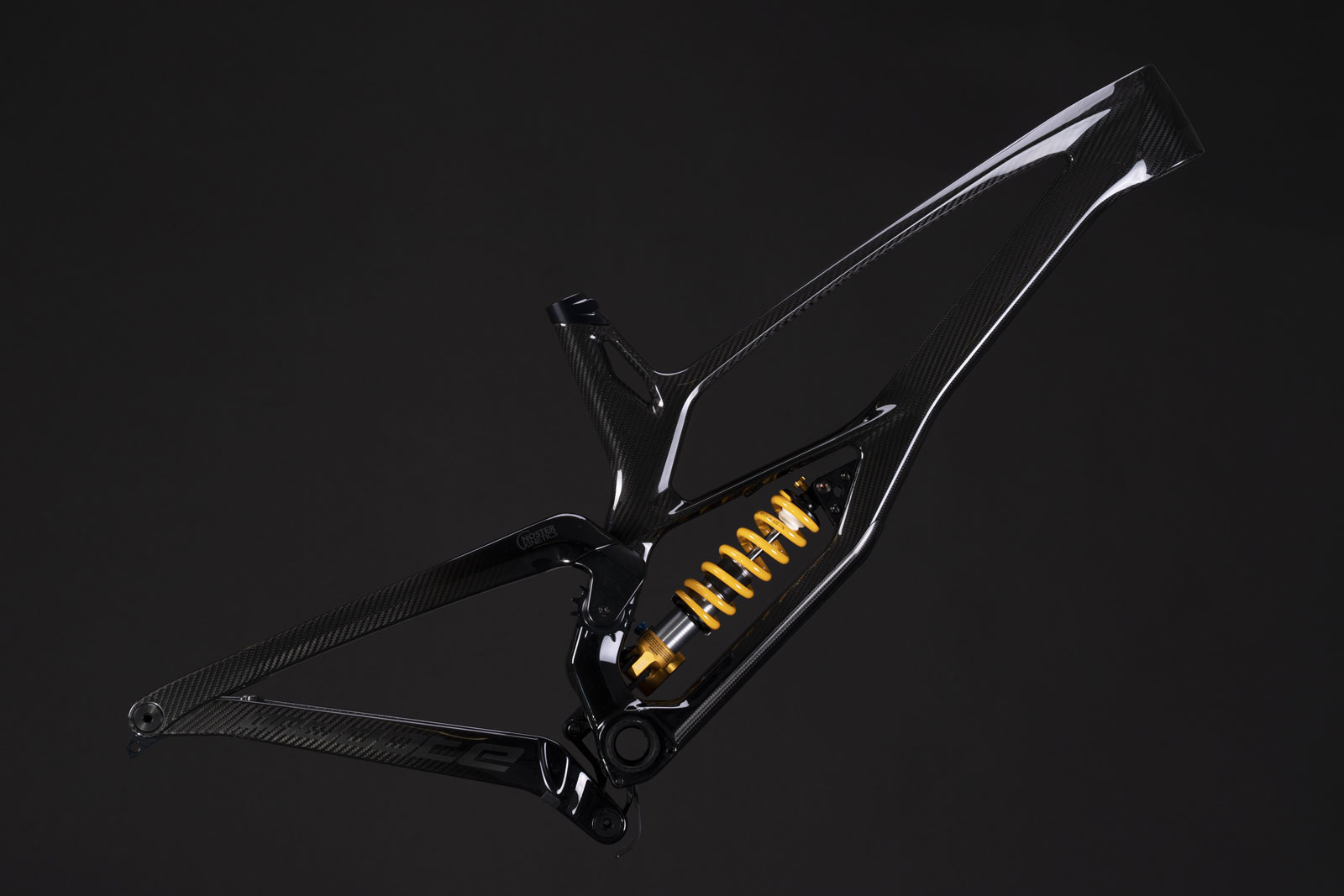 The Antidote Darkmatter with Ohlins TTX 22 Coil Shock will set you back €5999; the frame alone weighs a claimed 3.35 kg (large), including all frame protection

Antidote are highly particular about their carbon frame manufacturing and the hardware that holds those frame pieces together. As we saw on the Carbonjack 29 Enduro Bike – see the Porsche-modeled custom build here – the new Darkmatter 29 gets a carbon fiber frame with a construction reinforced with Kevlar and Vectran. The links and front and rear triangles are connected to one another via pivots running titanium and aerospace aluminum alloy bolts.

Unlike many downhill bikes, the Darkmatter 29 gets a Boost 148mm rear axle spacing. That, combined with the 449mm rear-centre and unique shape of the stays, gives clearance for up to a 2.6″ wide tire. Other notable frame features include the 7075 T6 Anodized CNC aluminum links pivoting about MAX LLU bearings, an ISCG 05 Mount for chain guide and bash guard fitting, and a Custom Flat/PM 203 mm Brake adapter. The bike runs a 57.2mm chainline (compatible with SRAM and Shimano cranksets), with a maximum chainring size of 36T on the 29, dropping to 34T on the MX.

A frame with seat clamp and rear axle will cost you €4,999. Frame and shock/fork combinations retail at the following prices: 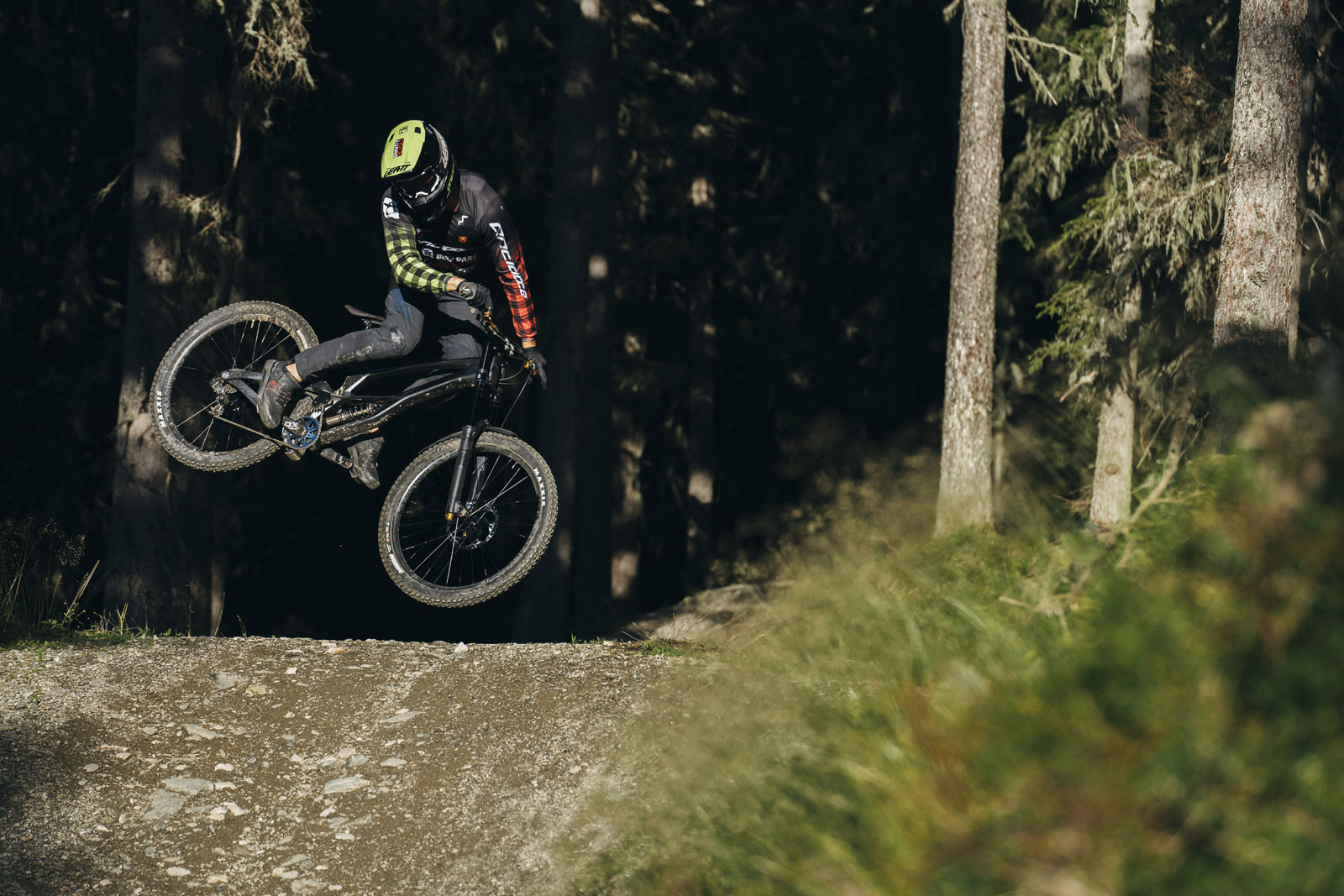