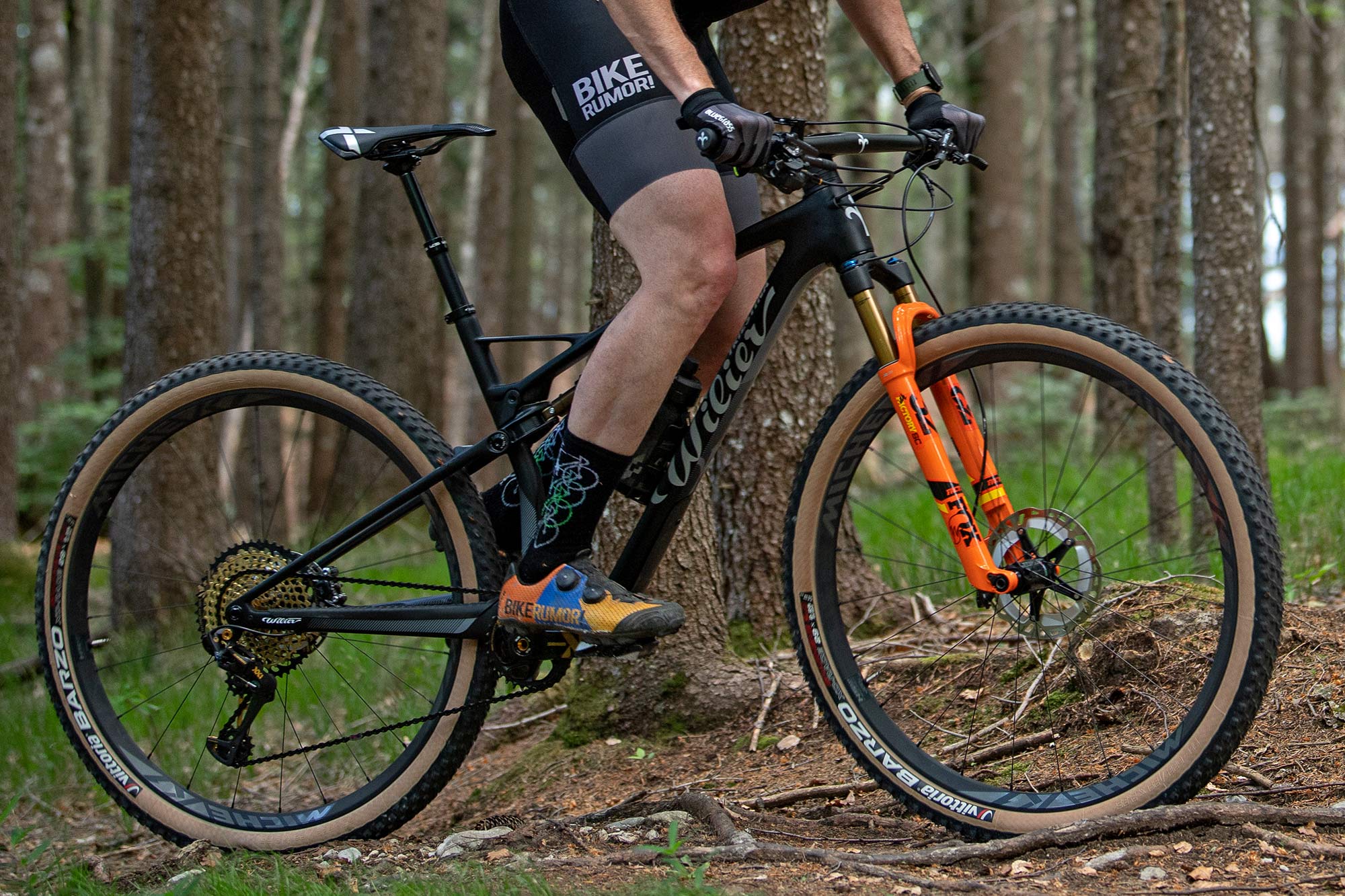 The long-running Trek Factory XC racing team has made an Italian shift, now becoming the Wilier Triestina – Pirelli Factory Team, and with the move, a complete new fleet of Wilier Urta SLR cross-country bikes made in Italy. while many cross-country race bikes have evolved more into longer, slacker, trail-capable mountain bikes, Wilier builds off their road racing heritage with an evolution of the rocket-fast XC bike… 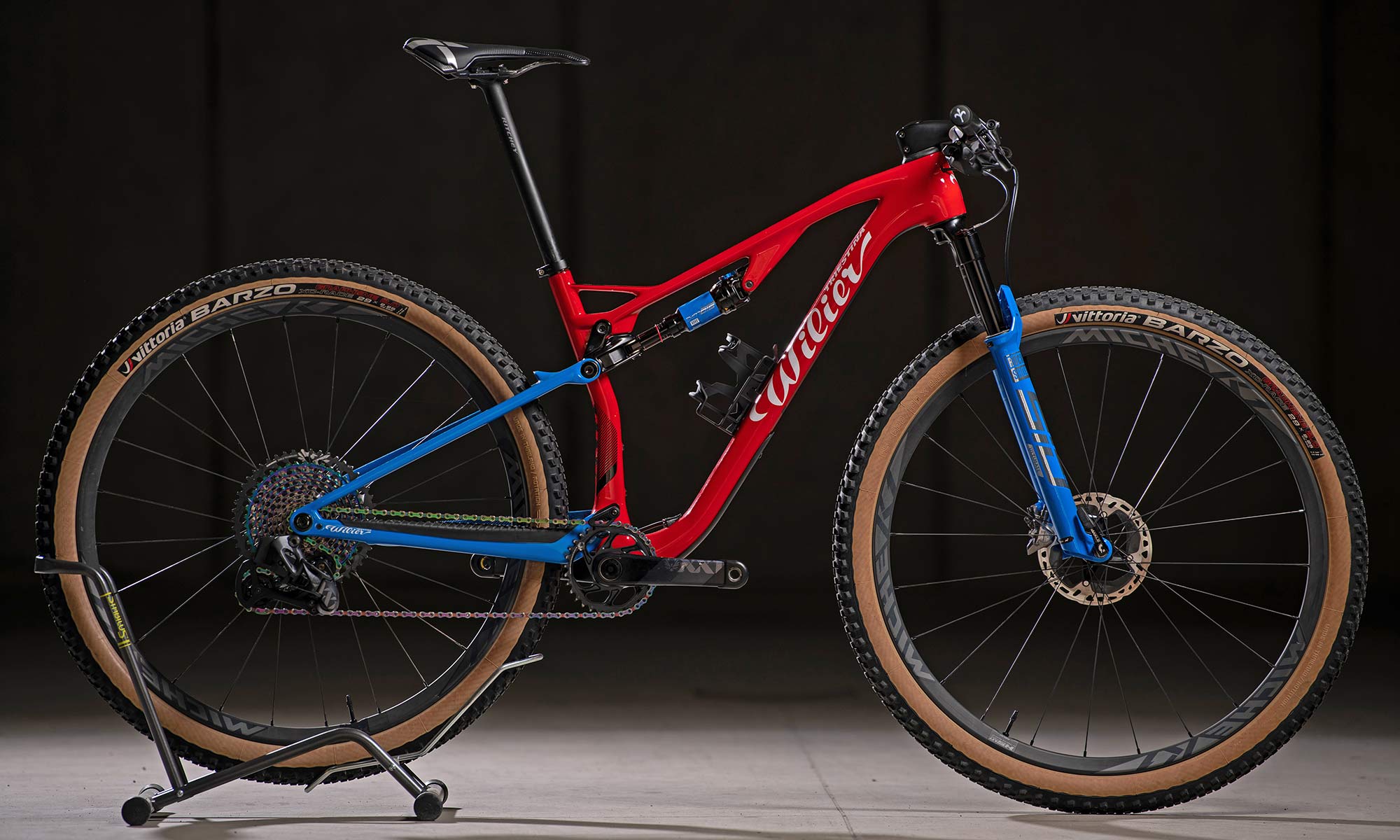 We most know Wilier Triestina for their premium Italian road racing bikes, and more recently gravel bikes. But the Italian designers & engineers race in the dirt too, so they’ve evolved their previous 110FX XC mountain bike to make it slacker, longer & faster.

The new Wilier Urta SLR is a still lightweight short-travel cross-country mountain bike built to go fast. And its new geometry is something of a happy medium between XC of old and modern trail-leaning bikes, well suited to serious XCO, XCC & XCM racing. 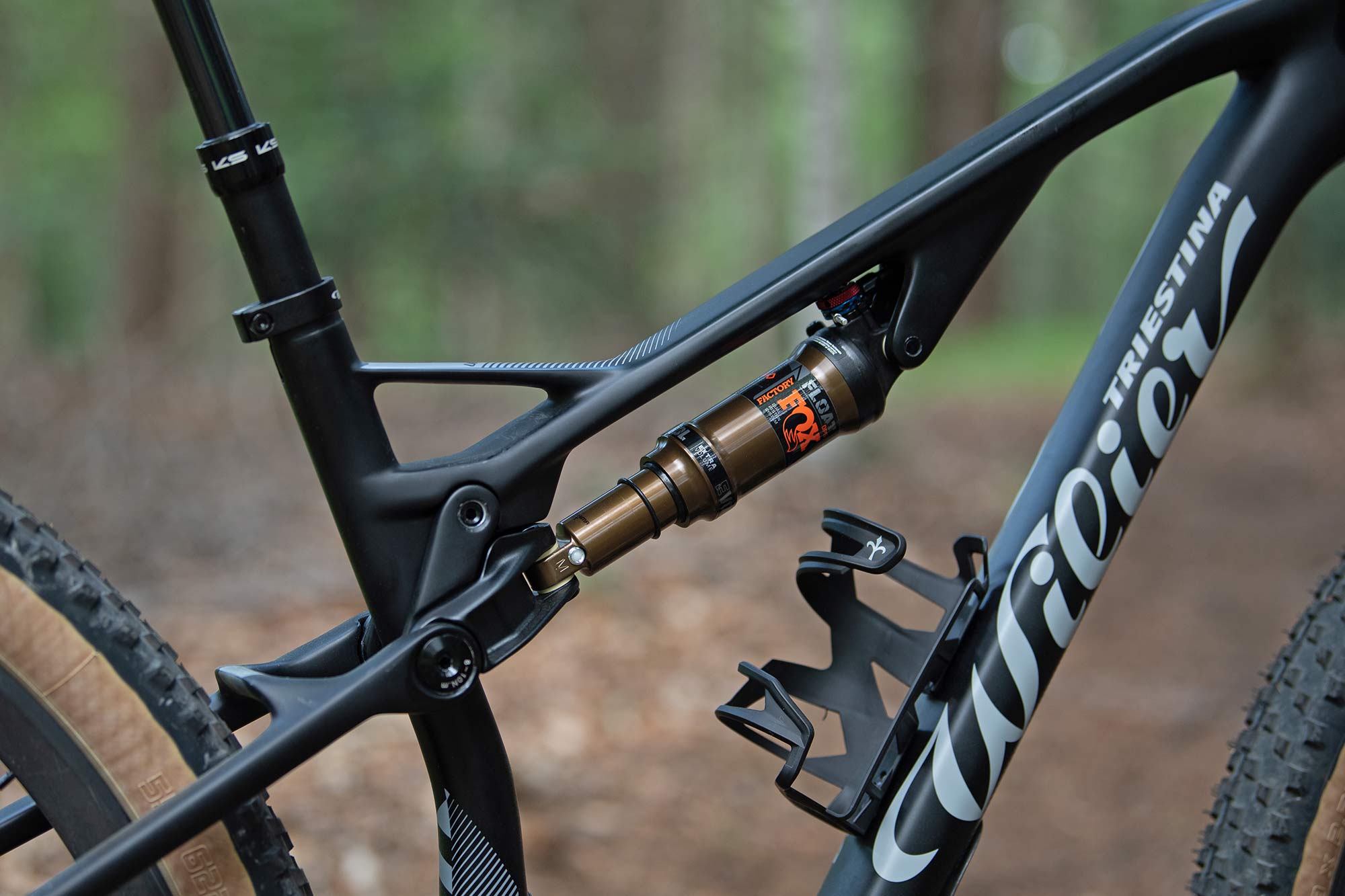 The heart of the new carbon bike is a simple high-single pivot suspension design with flexing seatstays and a linkage-driven shock tucked under the top tube. That leaves plenty of room for two full-sized water bottles in the main triangle of all frame sizes.

Wilier calls the layout of the traditional integrated as it tucks under the narrowed toptube, with a direct path for the remote shock lockouts to transition into the frame, similar to the Orbea I-Line patent without the special shocks. The entire suspension pivots on 8 of the same large-sized sealed bearings for good durability and easy maintenance. 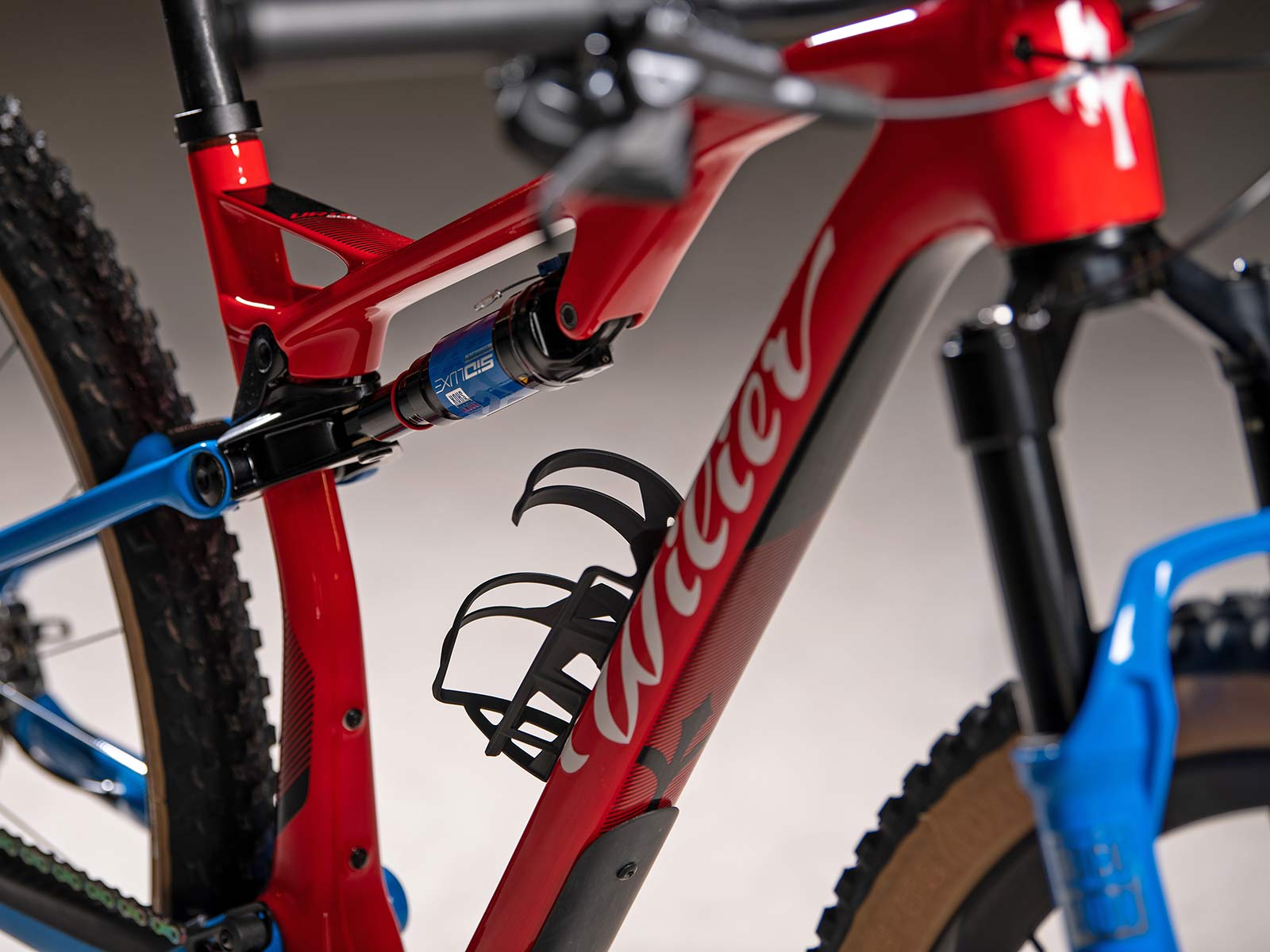 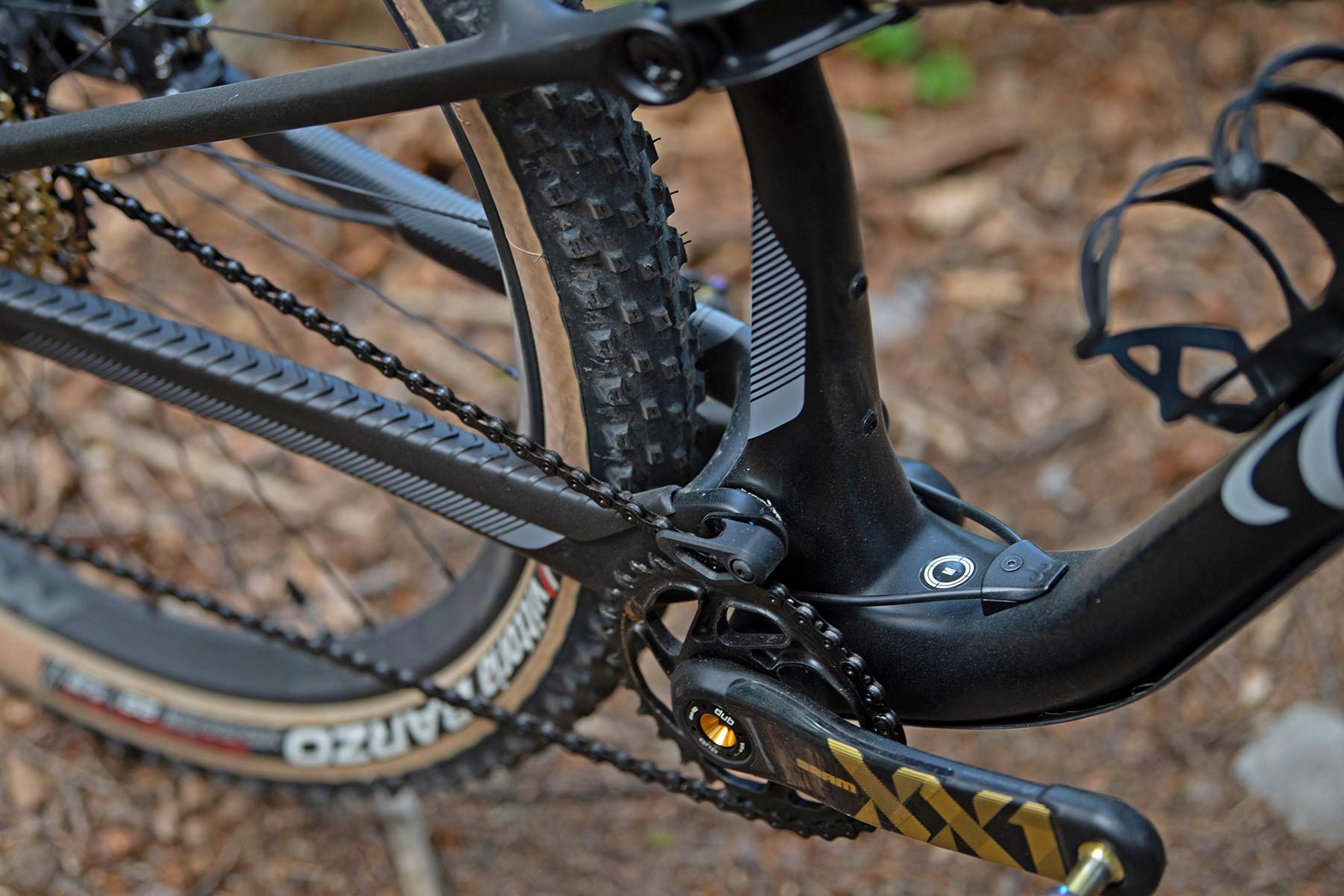 The Urta SLR gets a 38T max direct mount mini chain guide built onto the main pivot to work with 1x clutched derailleurs and narrow-wide chainrings to eliminate any chance to drop a chain in a race.

Wilier put a flat mount rear disc brake on the chainstay to save weight and allow for symmetric flex of the seatstays, while boosting chain stay rigidity. 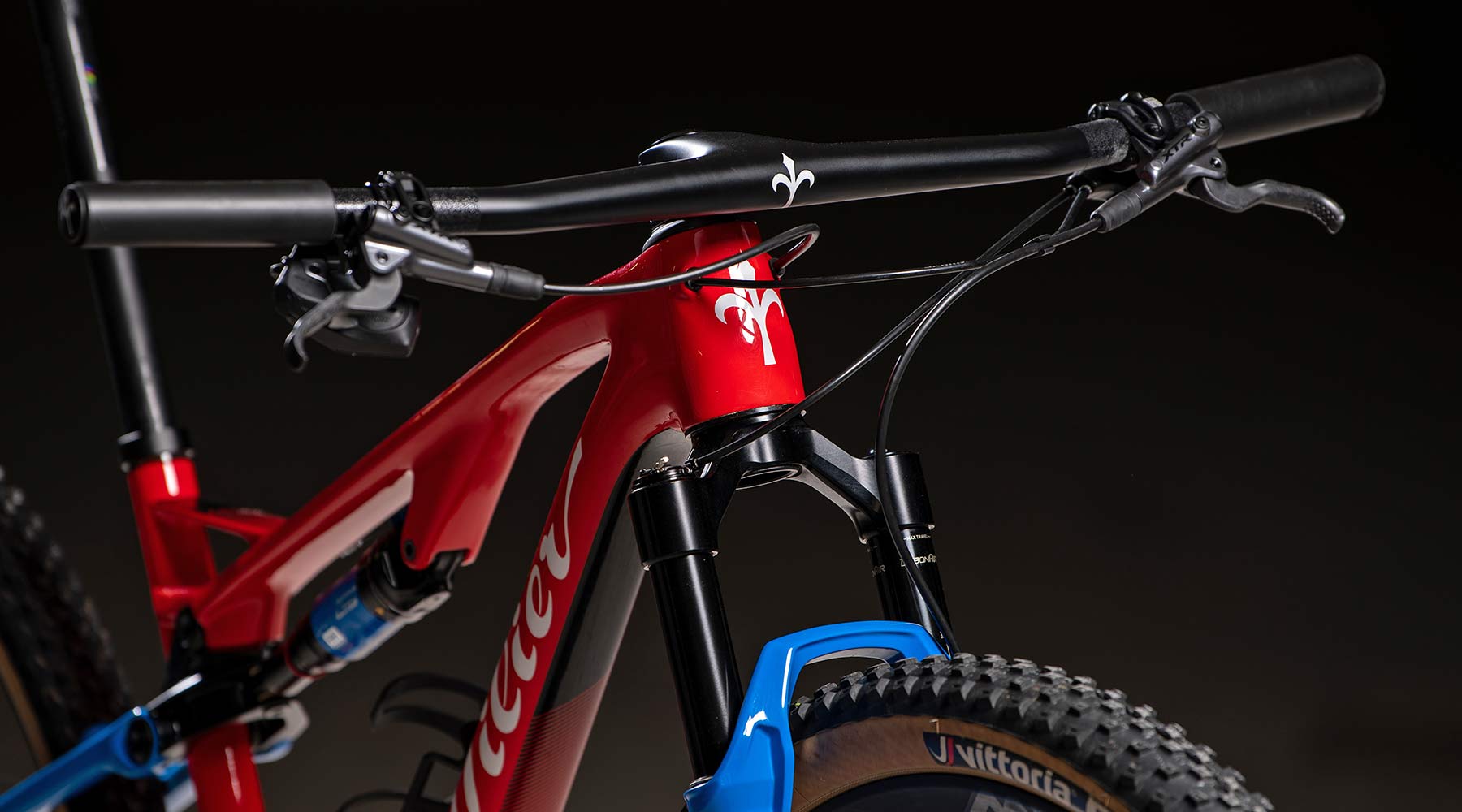 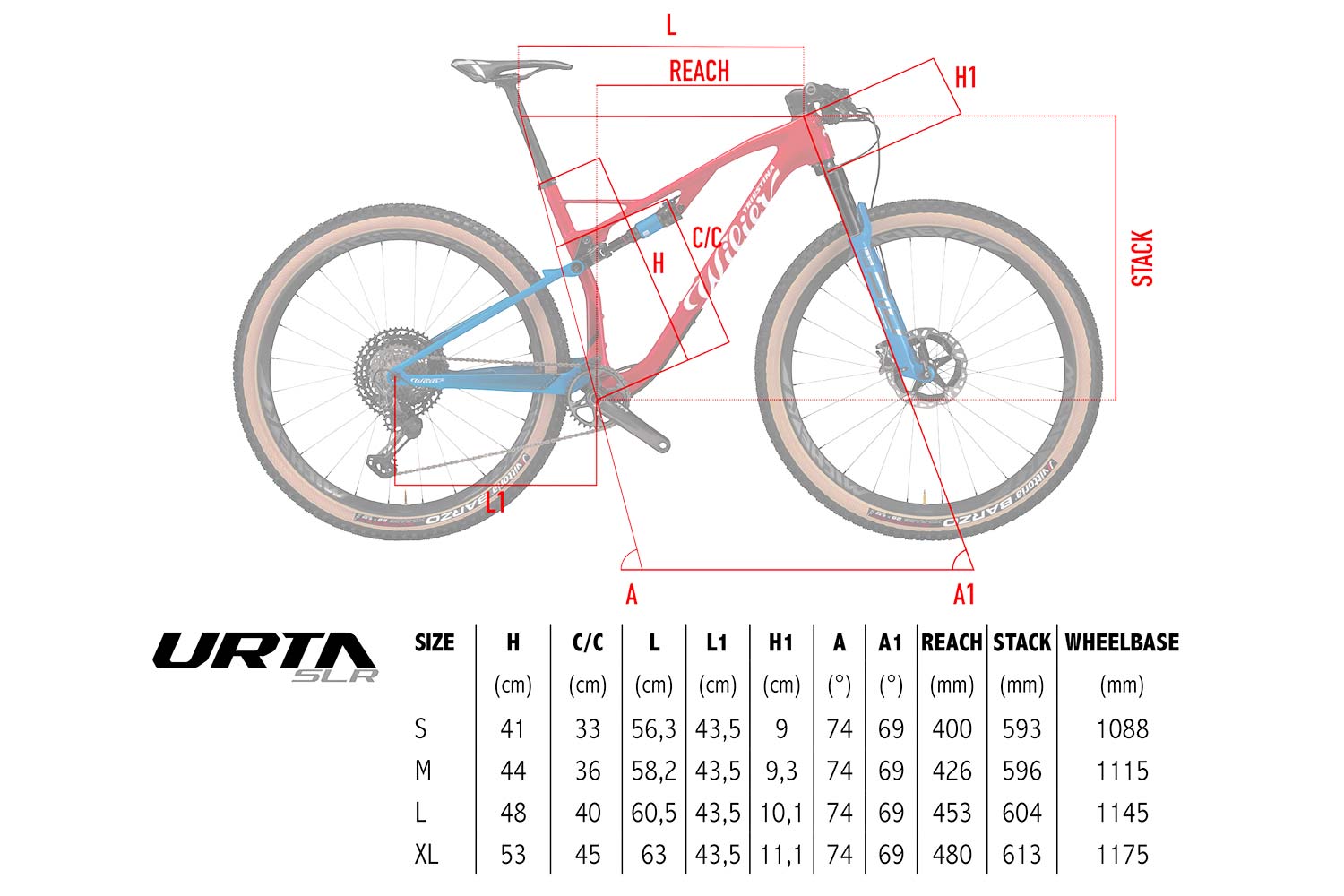 All of the new tech updates hit the dirt with updated XC race geometry – in four stock sizes (S-XL). The bike is longer & slacker than its predecessor, but still racy. The 100mm cross country bike moves to a 69° head angle, 74° seat angle, and about 1cm longer reach than before, with some of the lowest stack heights you’ll find in a modern World Cup XC race bike. 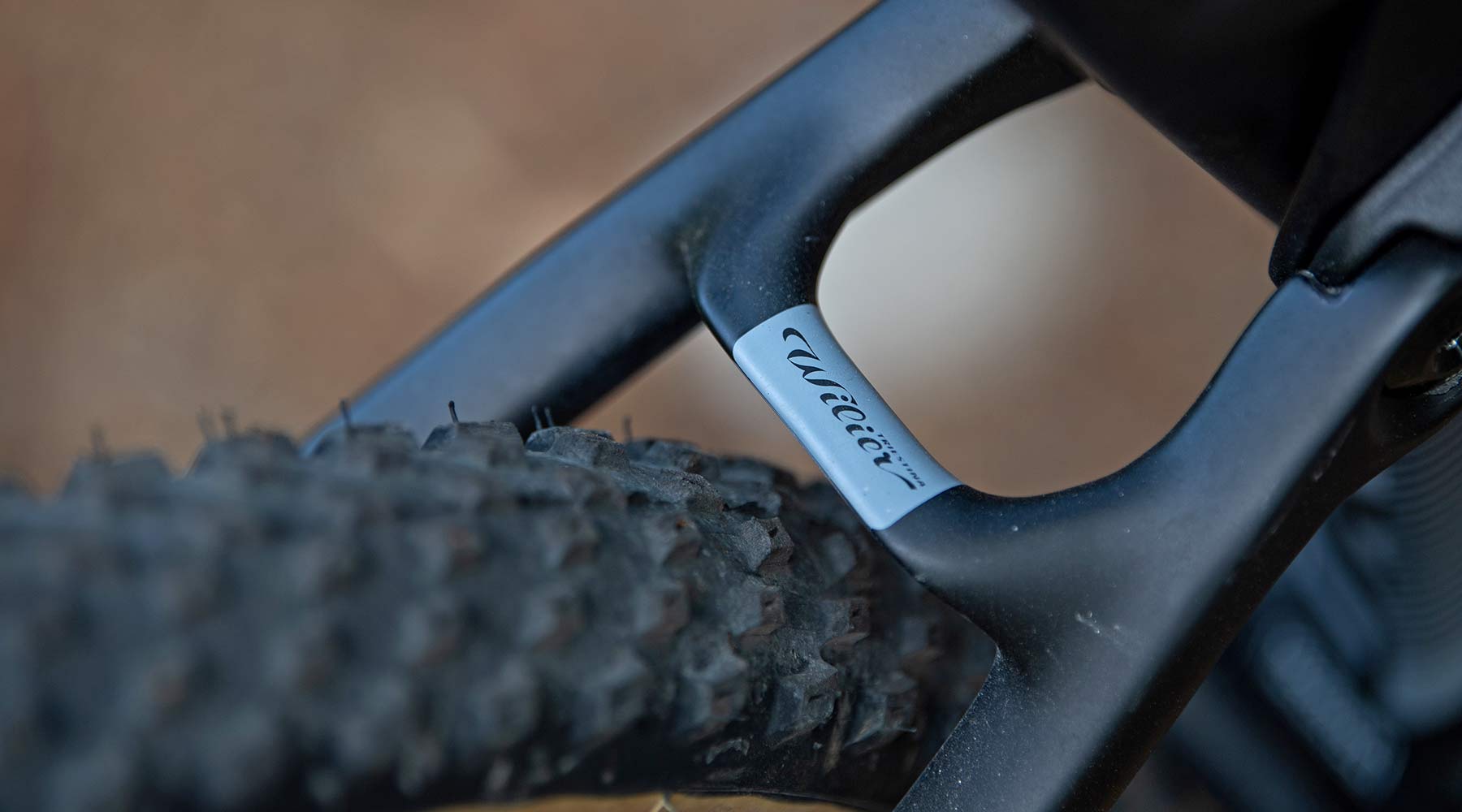 Wilier redesigned their top mountain bike as a cross-country race-specific bike, so it gets a bit more tire clearance but isn’t meant for trail tires. There’s plenty of room for 2.3″ 29er tires, but not much more than that.

The new bike now features a replaceable UDH dropout at the Boost 148mm rear end. It gets a classic 27.2mm seatpost with internal dropper routing, but a pressfit BB92 bottom bracket and flat mount rear brake. 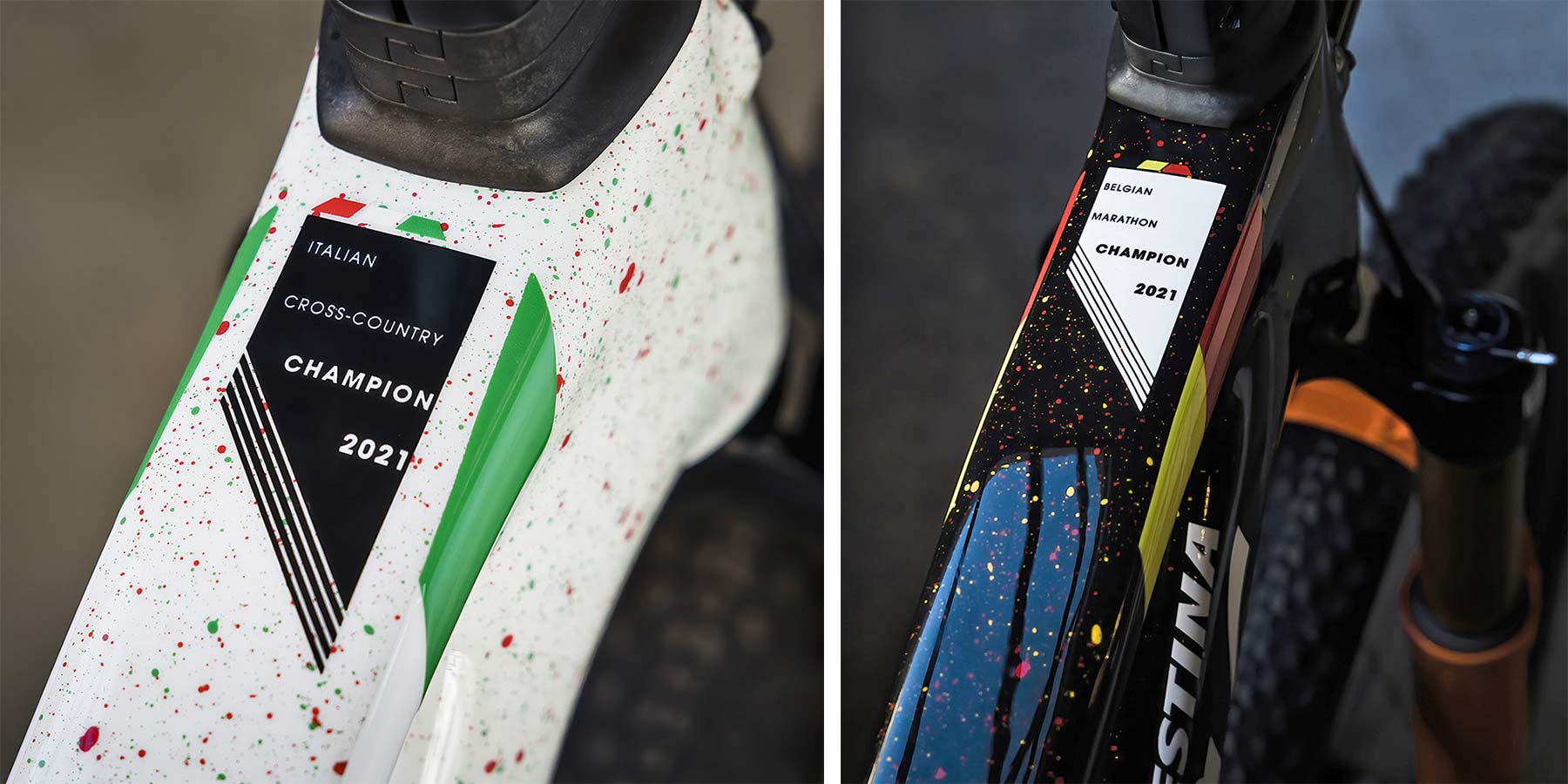 The new 2022 Wilier Urta SLR also just happens to be the race bike of choice of the new Wilier-Pirelli Factory Team that debuted this week, which you may have known previously as the Trek Factory Team. Mixing old and new team members under the same team management, Wilier-Pirelli gets more of a made-in-Italy focus – from Wilier frames to Pirelli tires to Miche wheels… to a couple of Italian national XC Champs.

And of course, national champs get custom bikes… 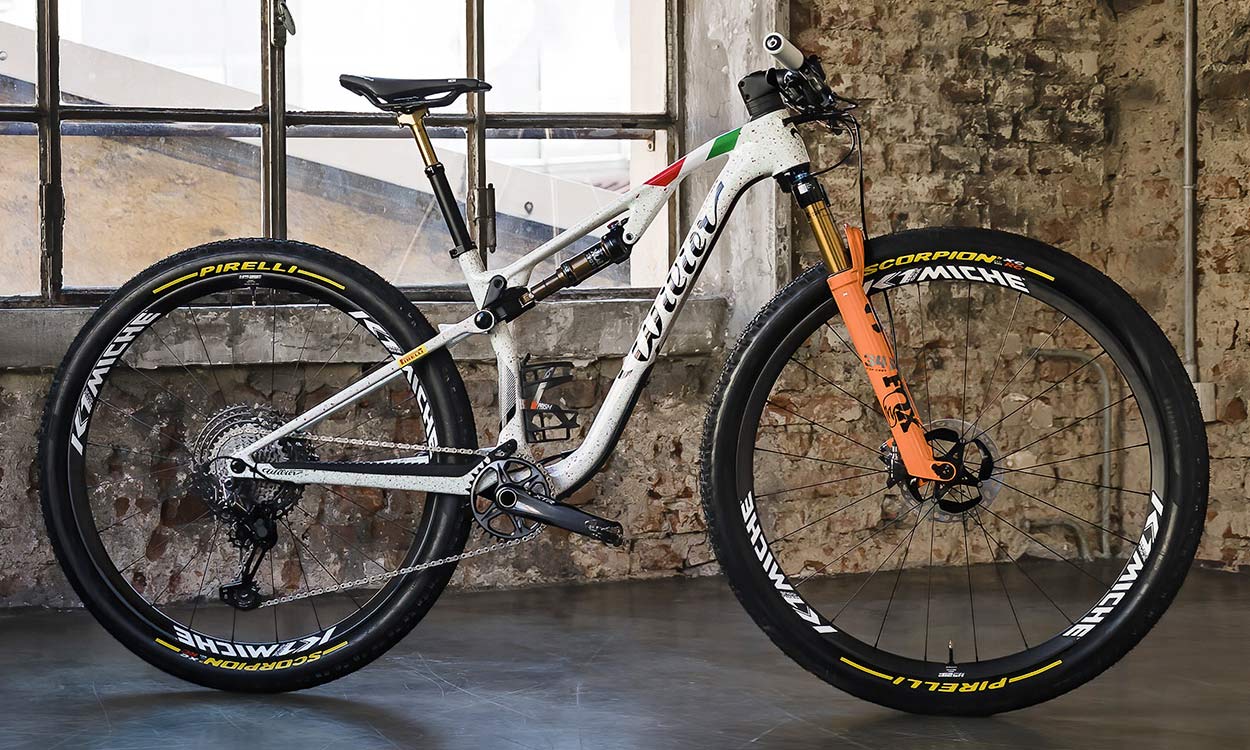 Both Italian men’s champion Fabian Rabensteiner and Italian women’s champion Giada Speci will race for the team in 2022 on Wilier Urta SLR bikes custom painted in the Italian tricolore. Interesting to see, the small bikes don’t get the seat cluster brace with their shorter seattube and lower standover height. 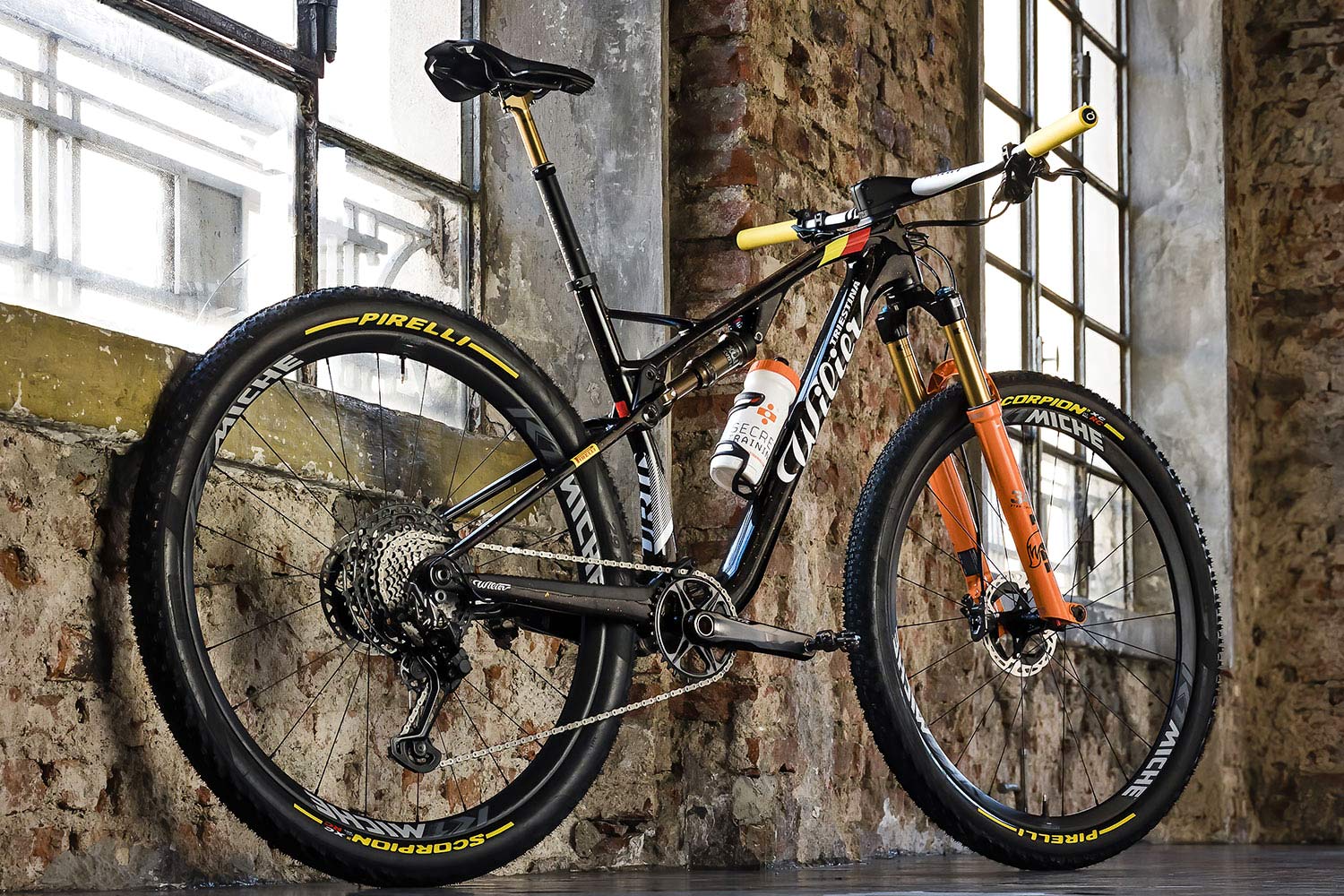 The other national champ on the team is Belgian Wout Alleman, who rides a less flashy gloss black bike, but the same tricolor flag is there on the top tube, and it still has the same tricolor paint splatter detailing throughout like you can see in the detail image above. 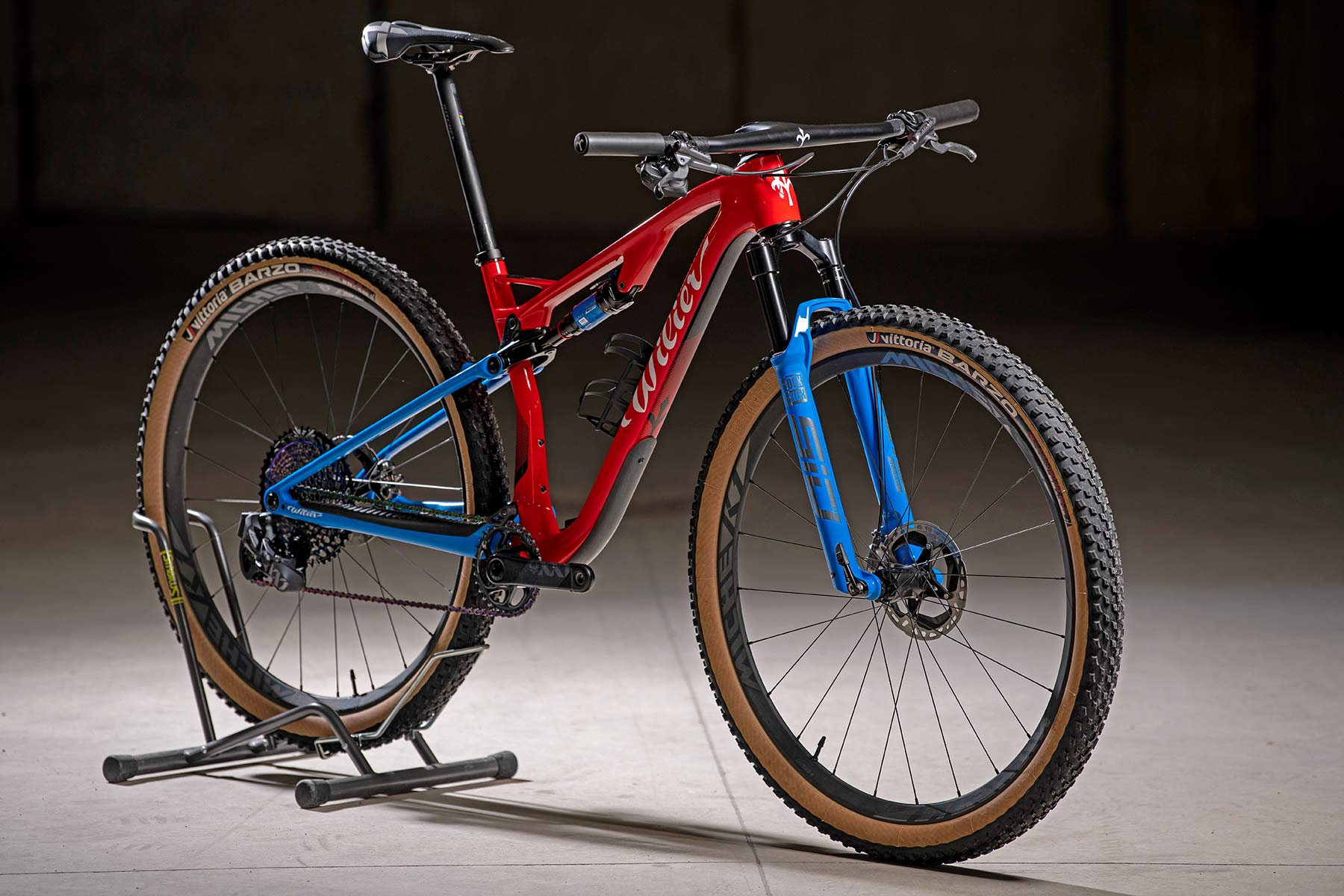 As for the rest of us that didn’t win an XC national championship title, the 2022 Wilier Urta SLR comes in two colors – this shiny red & blue paint designed to match a SID blue fork, or a more subdued matte black. The made-in-Italy carbon framesets sell for 3200€ together with a RockShox SID Luxe Ultimate shock or & 3600€ with a Fox Float DPS Factory shock. 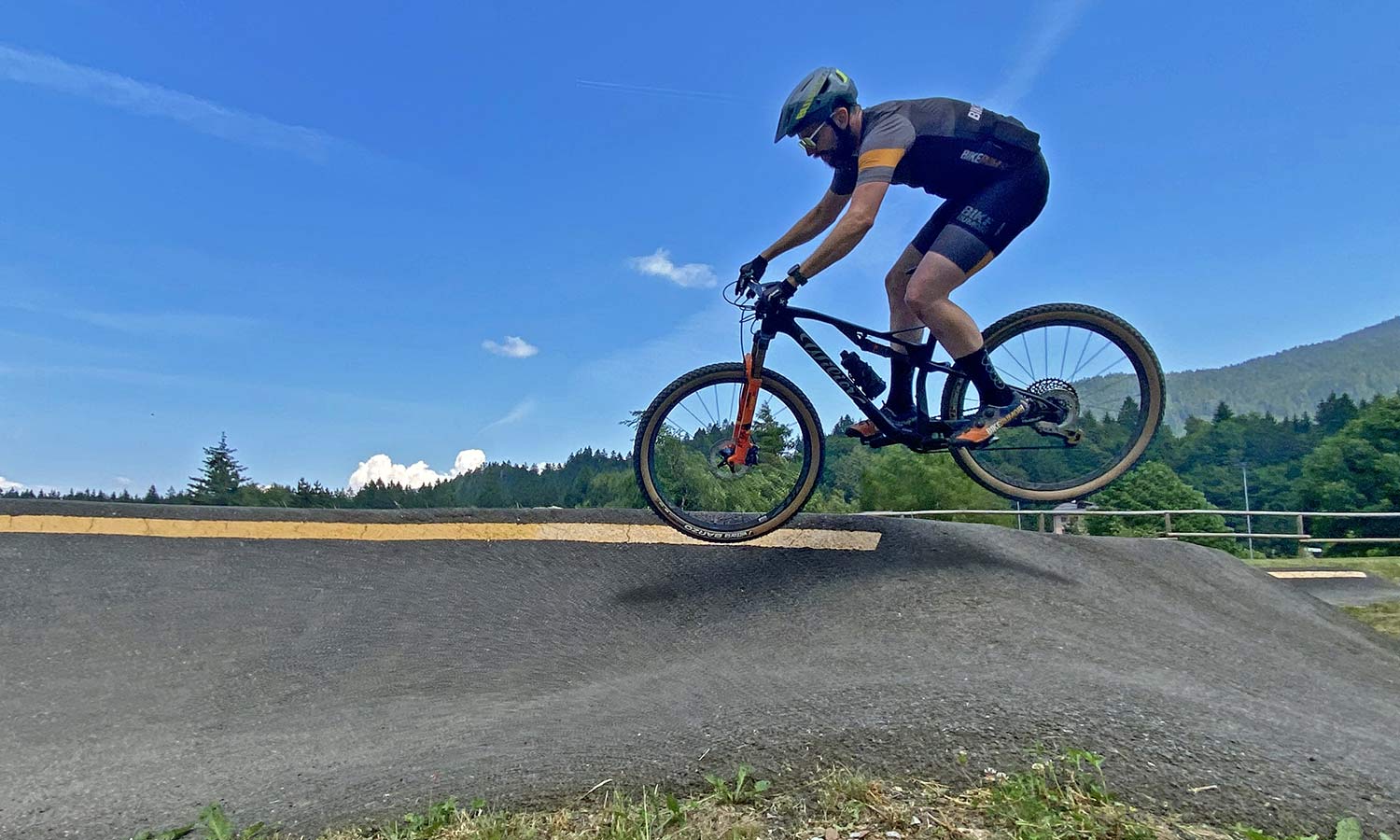 We got a chance to test out something in between – the 8200€ mechanical SRAM XX1 Eagle build with Fox Factory suspension, and alloy Miche wheels. First impressions were of riding a race rocket. It’s no trail bike, but it likes to fly – uphill, downhill, and even off those jumps you find out on the racetrack.

Check back for our detailed riding impressions soon…