Welcome back to the Bikerumor Ask A Stupid Question series. This week, we’re taking a closer look at the lesser-spotted usage of Truss Systems in bicycle frame design. One of our readers is interested to know why the use of trussing, in particular internal trussing, hasn’t been more widely taken up by the industry. To tackle this question, we’ve approached several frame designers who have, in various forms, used a Truss System in production of their frame. Having made use of Truss Systems themselves, they are perhaps best placed to comment on why this unusual frame design has remained, well… unusual.

Why is there no internal truss system in modern bike frames? Yes, we need to keep the surface smooth but why isn’t there more talk about individual strands of fiber taking a carrying load in a truss system? There could be potential weight savings in stiff areas like BBs and head tubes.

IsoTruss: Truss systems do offer advantages in weight and stiffness, but there are some challenges incorporating the truss system with the rest of the bike frame. First, some advantages. When it comes to hollow composite tubes/sections, the most efficient designs have thin walls and a large surface area. This makes the walls prone to puncture and such structures can be prone to shell buckling. Think of an empty soda can. You can stand on it, but the slightest touch to the wall of the can results in collapse. 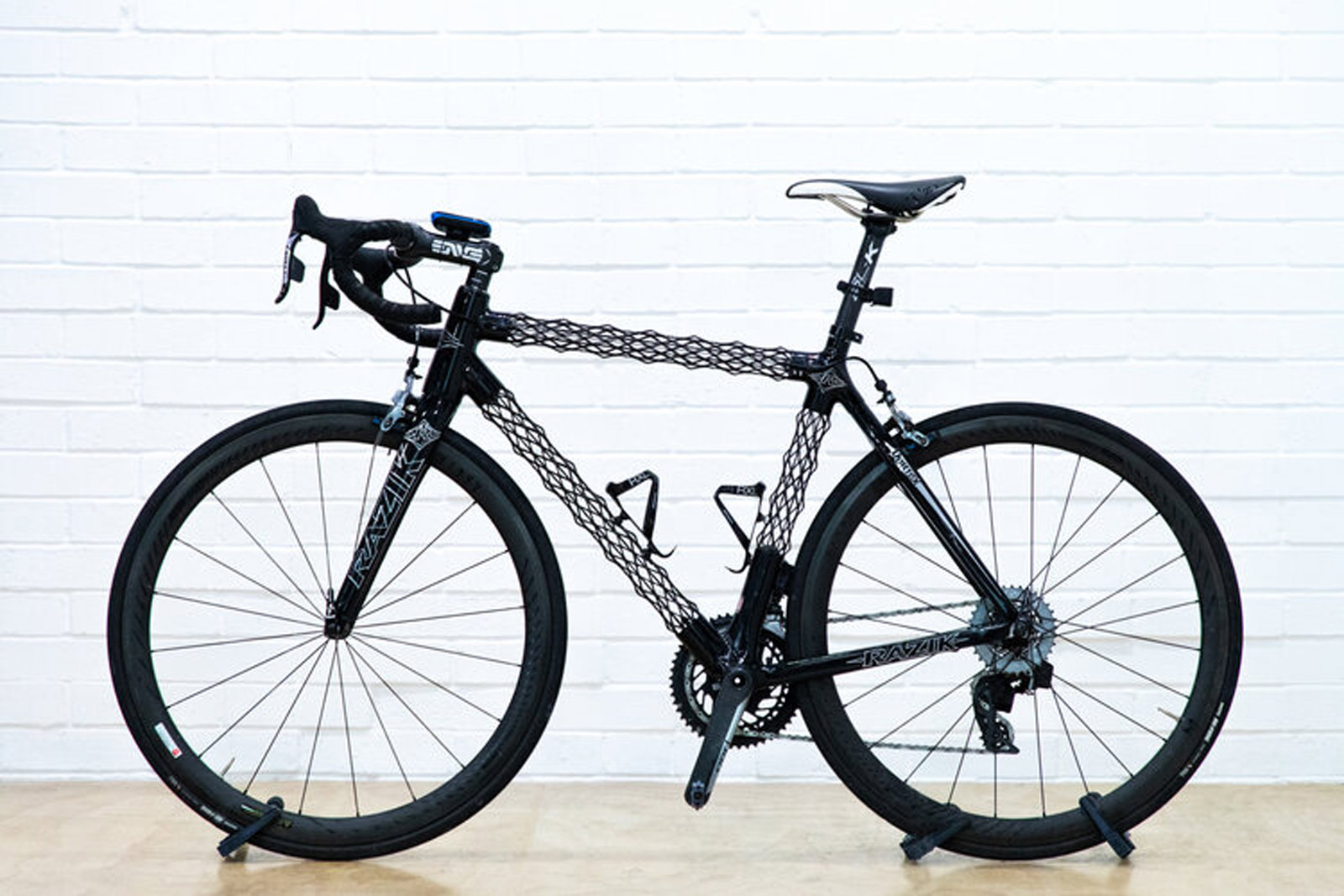 IsoTruss achieves its high strength-to-weight ratio with a special geometry that uses longitudinal and helically wound members.  The “iso” and “truss” in “IsoTruss” come from its  efficient geometry; isosceles triangles that form a truss of pyramids which are what give the IsoTruss its unique strength and stiffness. Would you ride one of these? Let us know in the comments!

With a truss system, individual members of the truss are more robust than the thin walls of the tube and less damage prone. The failure modes of a truss are typically easier to predict, too. Trusses are more efficient, from a strength-to-weight standpoint, than hollow tubes resulting in stiffer, lighter structures. 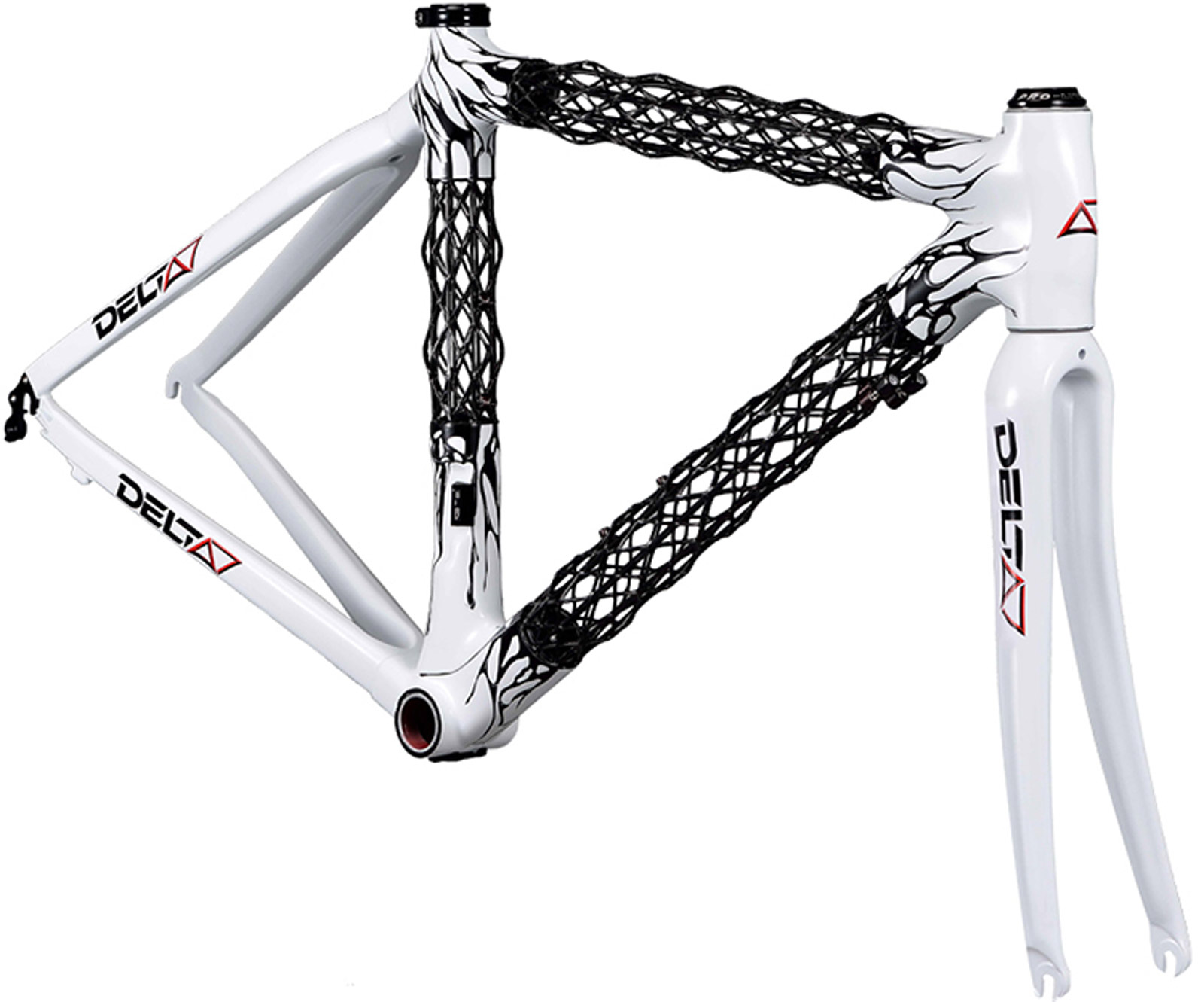 Now some of the challenges. The most pressing challenge, and the likely reason truss systems haven’t been adopted more readily, is manufacturing. The truss sections require complex manufacturing. Each section is made separately and then integrated with other frame components manually. This process is slow and expensive. For many, the additional cost doesn’t justify the boost in performance. Investment into better manufacturing methods would likely yield more consistent, less expensive products.

Galaxy Gear Works: First and foremost, any internal trussing/bridging/etc may be very difficult or impossible to accomplish in a meaningful or cost effective way on any production scale. The existing production methods that produce thin-walled metal tubing common in the bicycle industry (aluminum, steel, titanium, or otherwise) preclude the inclusion of internal features. While we can manipulate wall thickness with butting processes and shapes with various forming methods, we can only produce hollow tubes i.e. no trussing. Carbon tubing production as we know it in this industry would also (usually) preclude the creation of internal features whether the tubes are formed on a mandrel or inside a mold. However… I have seen internal bridging in the steerer on a few carbon forks in the last few years. I don’t believe it is common practice. Why not, you might ask? Firstly, I’m certain that it’s an enormous pain in the ass to mold the steerer with a web dividing the tube. Layup precision and laminate compaction would be complicated to say the least. Bladder equalization and post-cure removal could also be significant hurdles. Here’s another thought that is perhaps the real reason why it is not common; a fork steerer has to meet certain structural criteria that perhaps define the wall thickness to a degree that an internal web/bridge is superfluous. Shear and bending forces at the fork crown aside, the top of the steerer tube has to resist the clamping forces of the stem and ham-fisted mechanics.

Even supposing everyone ritually abides by the manufacturer’s torque specifications and uses a torque wrench to install the fasteners, it has to withstand a fair bit of crushing force. Add the real-world stresses with the “fudge factor” that the engineer calculates in there to keep the lawyers happy, and the steerer has to have a pretty hefty wall – certainly burly enough to handle normal torsional, shear, and bending loads as well.

The steerer also has to have that “hefty” wall thickness through so much of its length to accommodate the stem clamp height for an extreme range of bike sizes, assuming a production fork. So… does it really make any sense for internal trussing/webbing/bridging on a production made fork? In my opinion, it would require too much effort for far too little reward. I don’t believe it could add measurable performance benefits or reduce weight at a meaningful level. 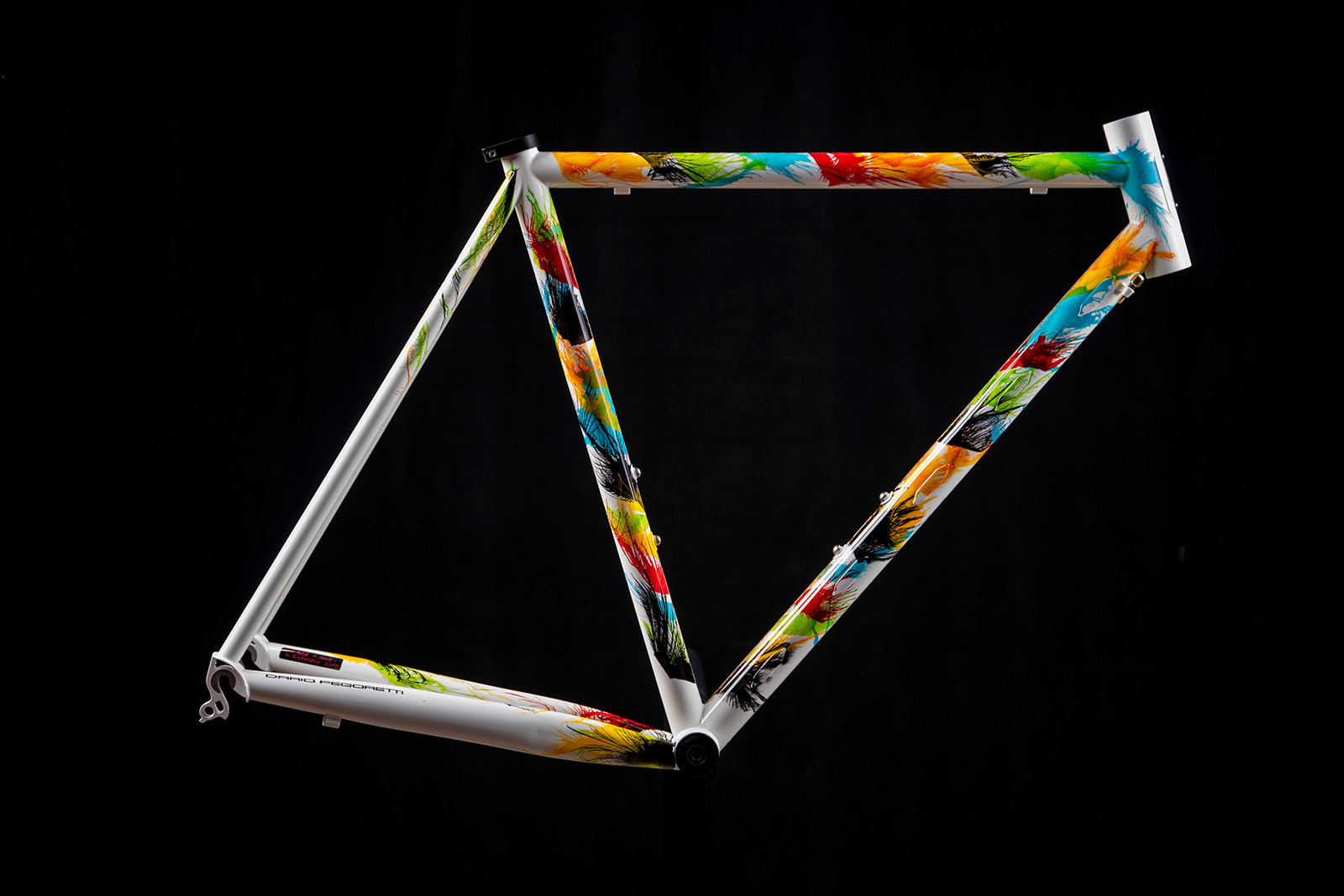 The Pegoretti Big Leg Emma frame with one of the most stunning paint jobs we’ve ever laid eyes on!

I have also seen a few examples of internal features on steel bikes, and I’m currently riding an MTB with internal bridging in the chainstays. The point of the aforementioned features is stiffness. Dario Pegoretti created the Big Leg Emma with a series of flat sheet bridges in the downtube. They are inserted into slots cut into the sides of the tube, brazed into place and covered with a tidy, brazed-on gusset. You can see these features clearly on the model page on the Pegoretti website.

The tubes on this bike are fairly large in diameter for steel tubing, and I’m sure that the walls are pretty thin. In my opinion, the bridging plates are long enough (in reference to the long axis of the tube) to act as a truss to increase the tube’s resistance to side-to-side bending forces i.e. all-out sprinting for city limit signs on Tuesday nights. How much stiffer is it due to these internal features? I have no idea. It could be measured of course.

My current MTB was built as a “shreddy hardtail” so it needed to be somewhat burly. Strength and stiffness were paramount, and those attributes had to marry with a kinda short chainstay length and 2.8″ tires. With all that in mind, the chainstays were pretty narrow where they were formed around the tire. I felt like this narrow cross section wasn’t going to produce enough lateral stiffness in the stays.

Part of my concern was the real possibility of tube deformation and bending under pedaling loads. Like the advantages I believe to be present on the Pegoretti downtube, I think I added strength and stiffness to the tubes by adding horizontally oriented plate bridges across the interior of the narrow, forward portion of the stays. I executed these additions by slicing the tubes, inserting the sheet-metal plates (about four inches long), and welding the plate’s edge along the tube intersection. 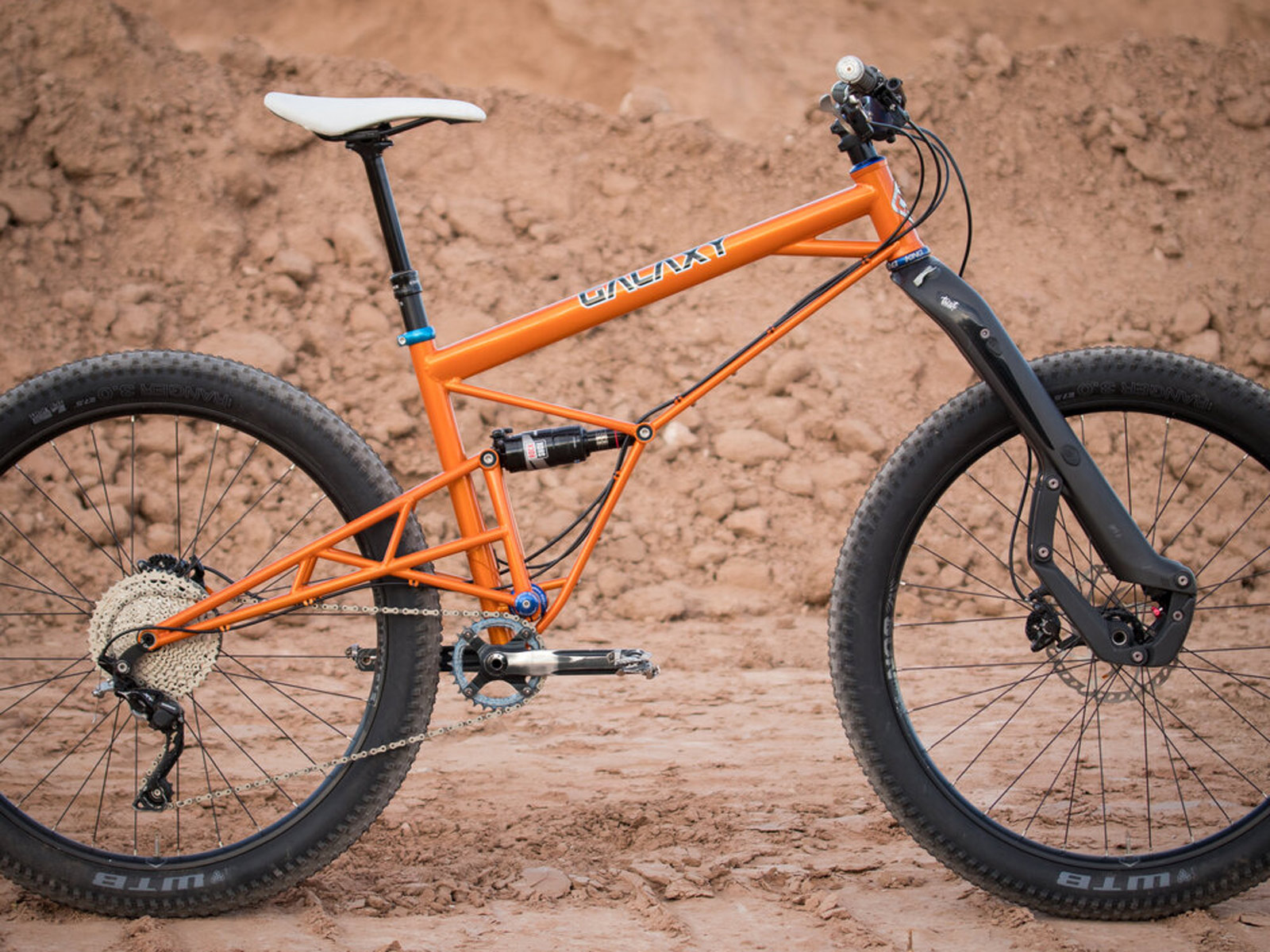 Now we ask the question, “was it worth all the effort?” I don’t know the answer. I didn’t do any lab type testing or calculations. I’m no engineer. What I do know is that the bike rides well and is going strong after more than two years of hard riding. I also know that I damn sure didn’t save any weight by adding those bridges.

Is it possible that internal bridging/trussing could allow thinner walls on the tubes? I’d say heck yeah! How would we do it? Perhaps 3D printing somehow rather than laborious hand work or a combination of both? And would it come at a cost to durability and therefore practicality? The answer might be yes. Use the massive, but not surprising proliferation of carbon repair services springing up all over the country now that the volume of out-of-warranty carbon bikes has reached critical mass as evidence. The tubes on ultralight carbon road bikes don’t need to get much thinner unless we see more volume of tougher materials like Dyneema incorporated into the laminates. That stuff is expensive though! 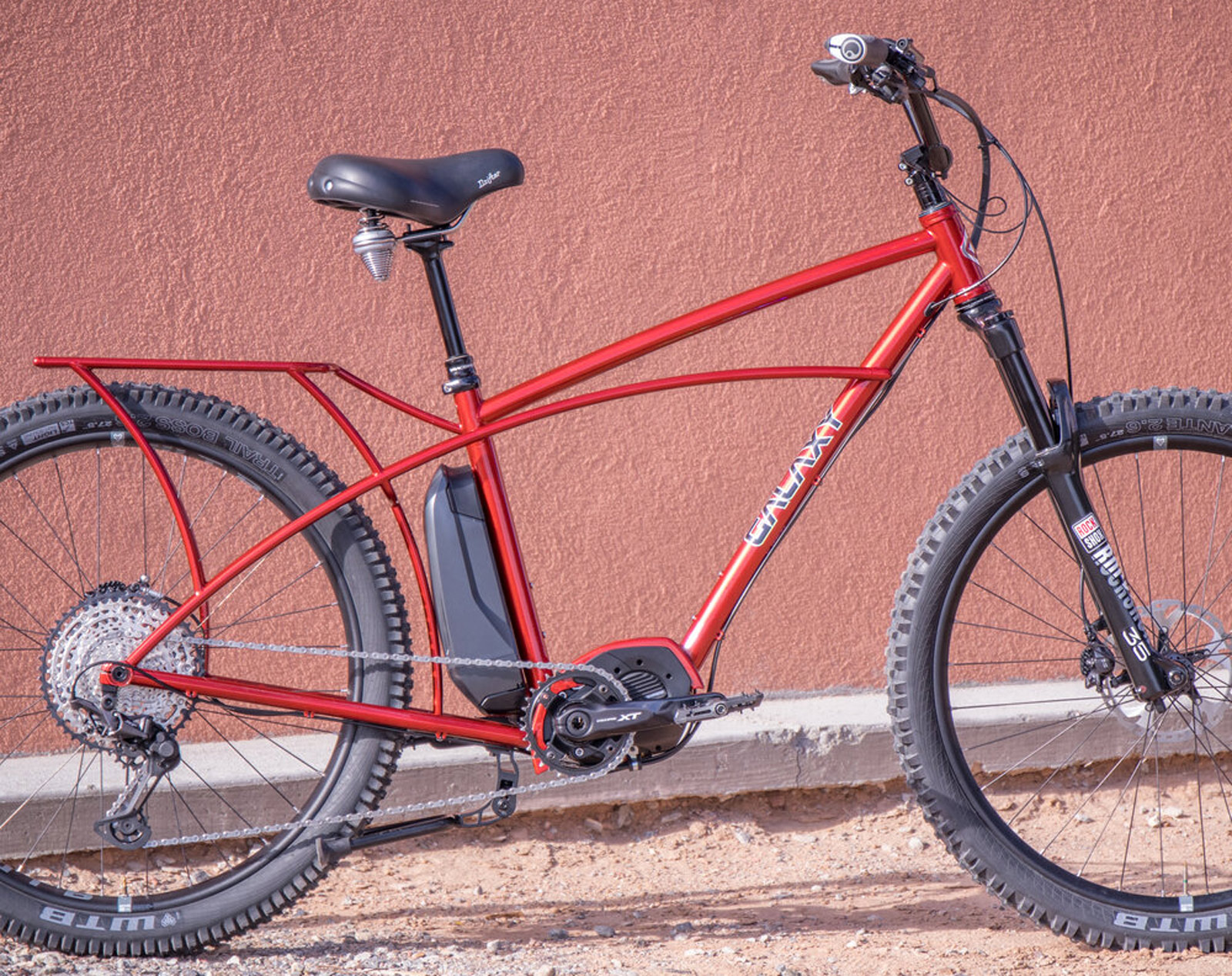 In the real sense, internal trussing does not commonly exist in this industry. With carbon production frames routinely coming to market below 900g, is there really a need to try and make them lighter? I’m not sure. And more often than not, these ultralight bikes are plenty stiff thanks to high modulus carbon and smart laminate engineering.

Frace Bike: A tube compared to the truss system is having always less weight for having the same stiff characteristic. So it is for sure more weight saving to have a tube – but it is also a lot more boring. Everybody is doing tubes – but we want to have something different from all the others. And, for having a fully milled frame out of aluminum there is no other opportunity than choosing such a style as the truss system. But this truss system is more expensive – but it is looking great. Sure you have to pay more but then you are getting a unique style. 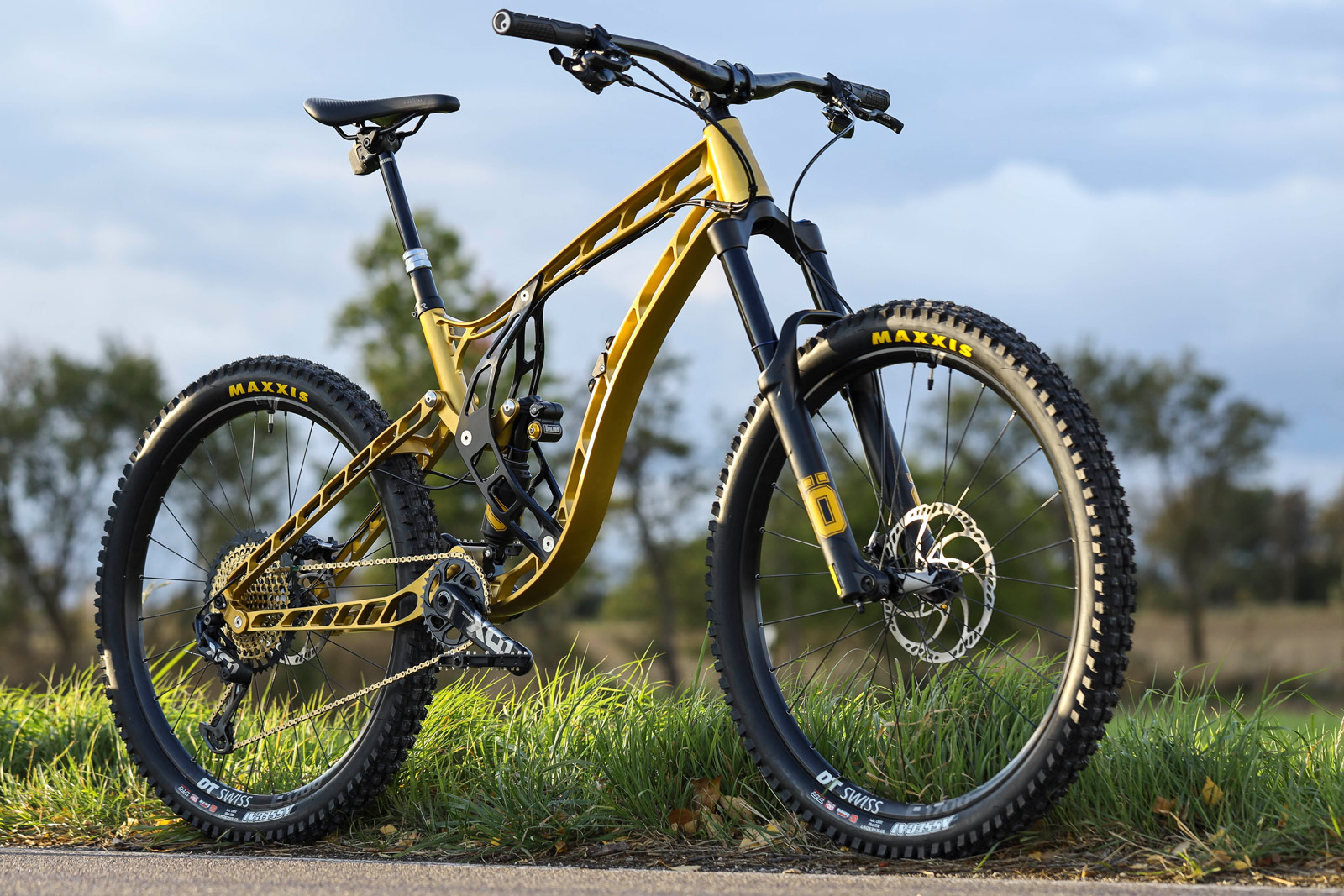