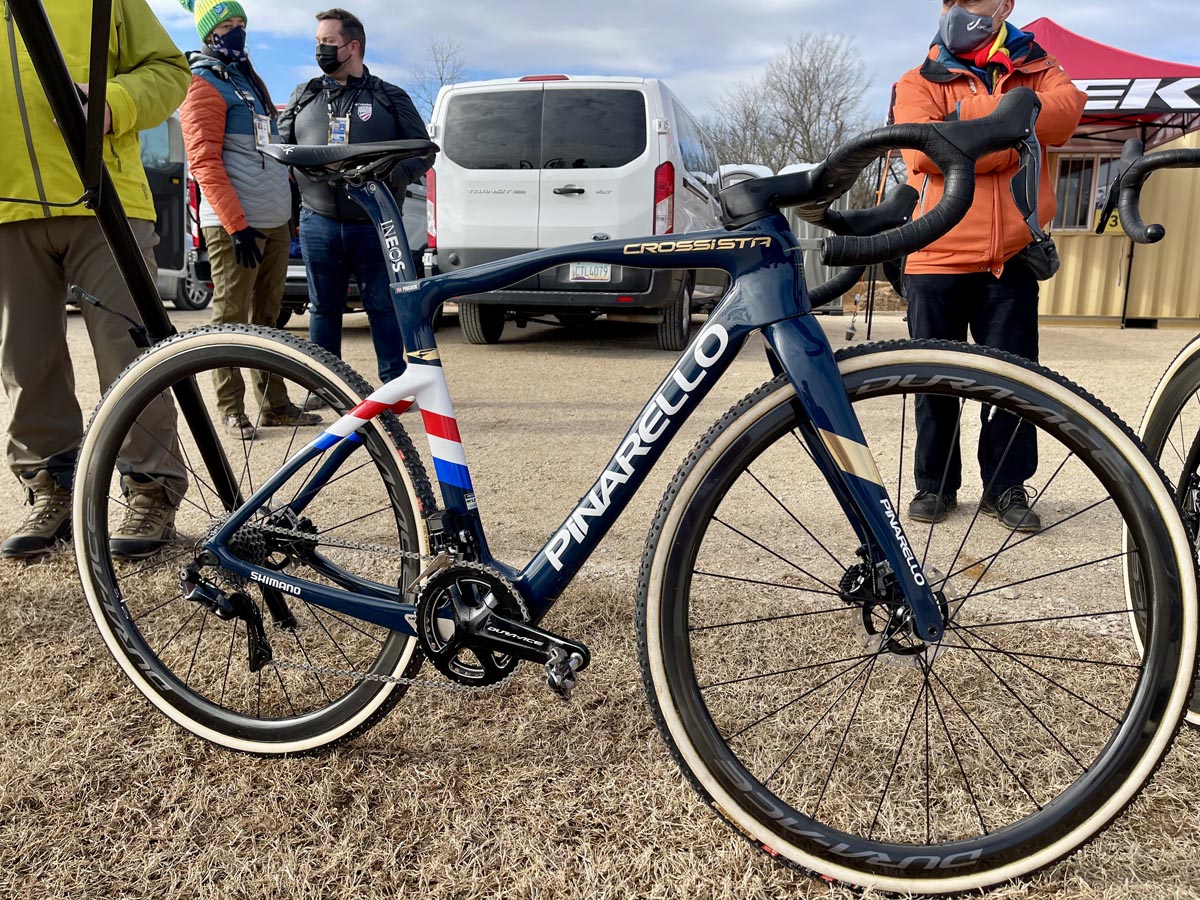 After Tom Pidcock officially signed with the Ineos Grenadiers squad in early 2021, Pinarello knew they had to get to work right away. They already had a solid cyclocross bike with the existing Crossista, but they knew with talent the likes of Pidcock helping to guide them, there was room for improvement. That improvement eventually led to the bike that is officially launching today—the Pinarello Crossista F. 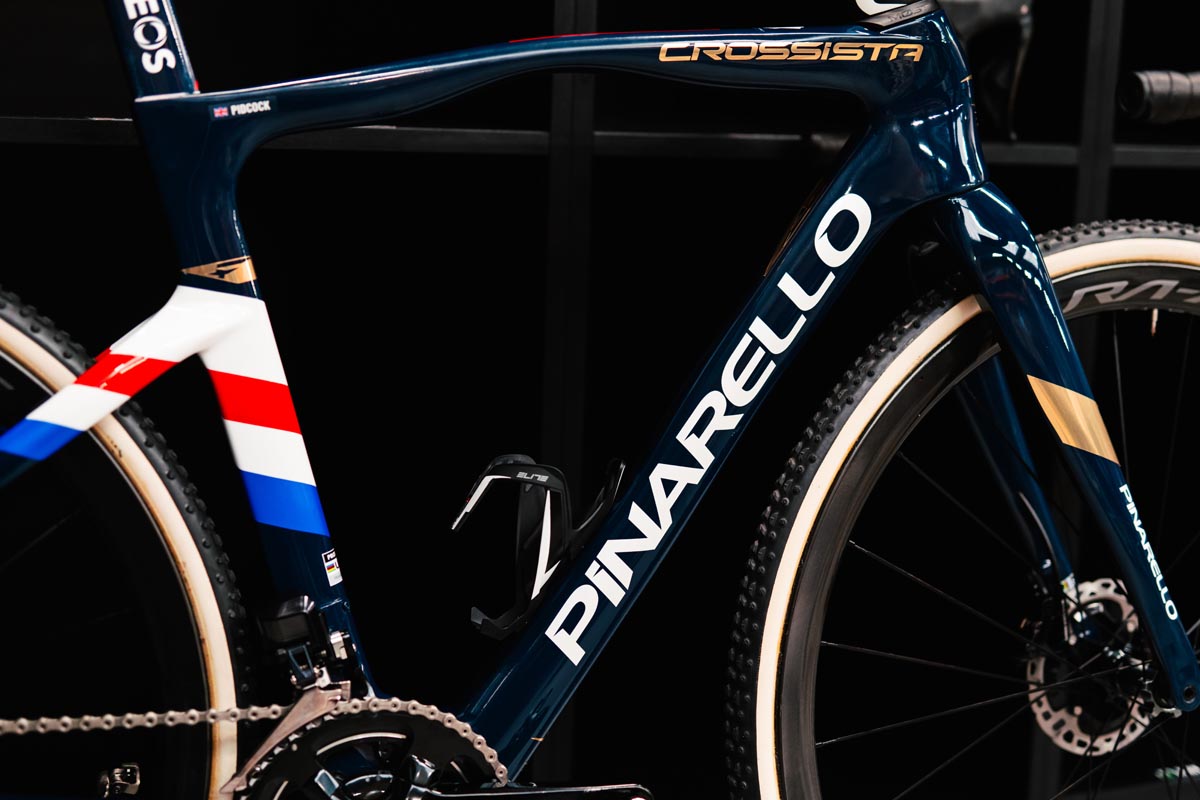 According to Pinarello, there were specific areas of the frame that Tom and his team hoped to improve. After visiting the Pinarello HQ in Treviso in Spring 2021, Tom tested the existing bike and then got straight to work with the Pinarello R&D team to create what would eventually be called the Crossista F. 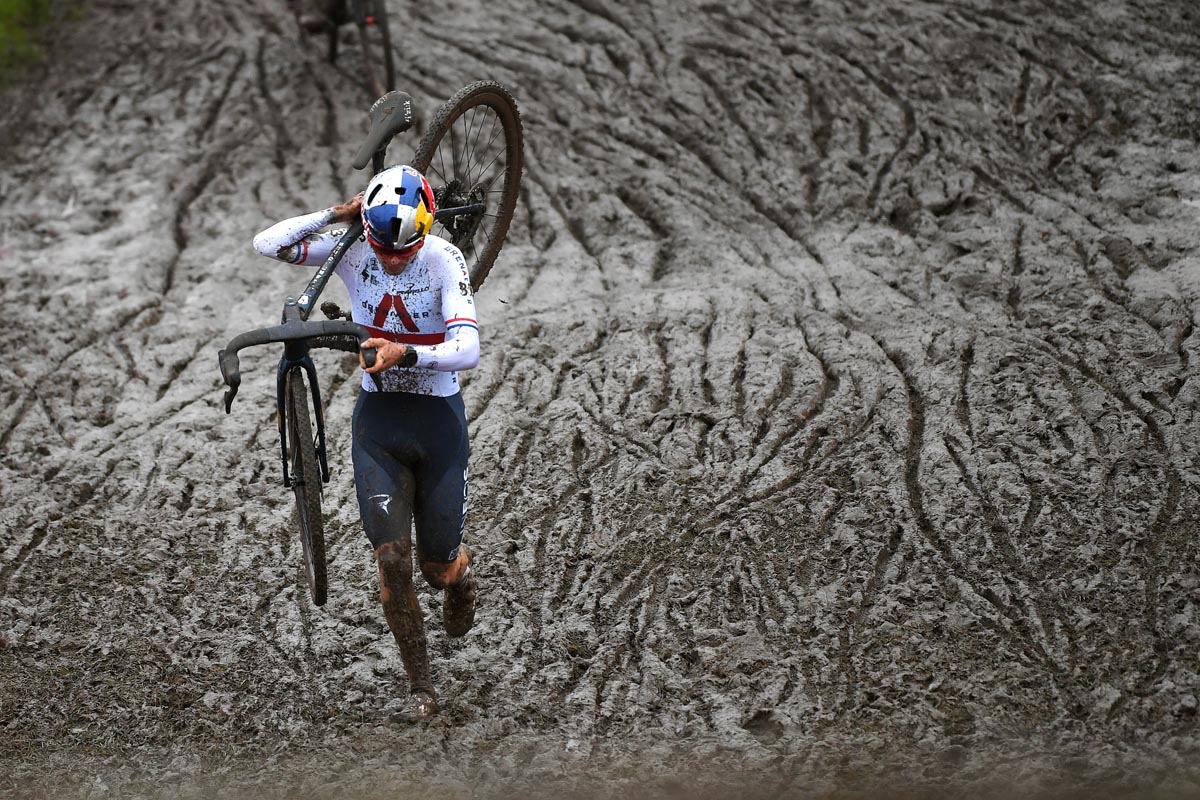 One of the big things Tom wanted was an updated top tube and front triangle to make shouldering and running with the bike easier and more comfortable. 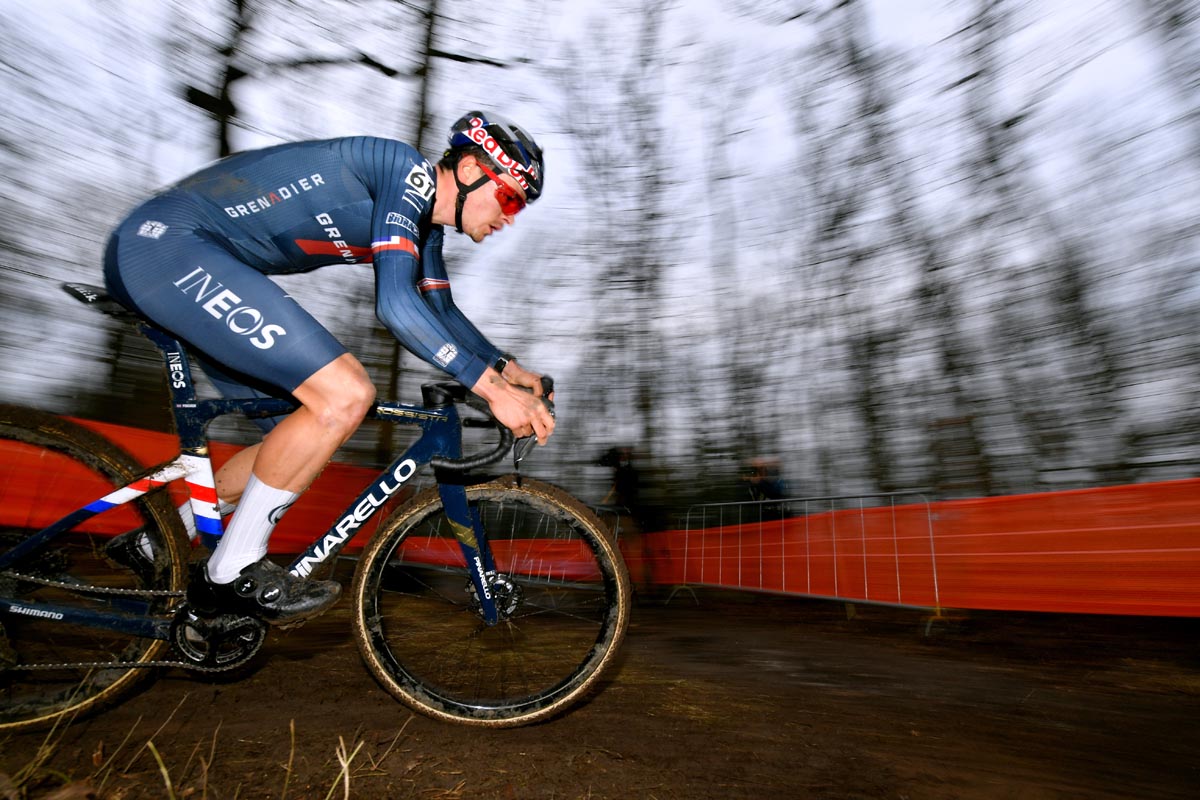 Unspecified geometry tweaks were made to the frame including changing the BB height, apparently guided by Tom’s impressive bike handling skills. 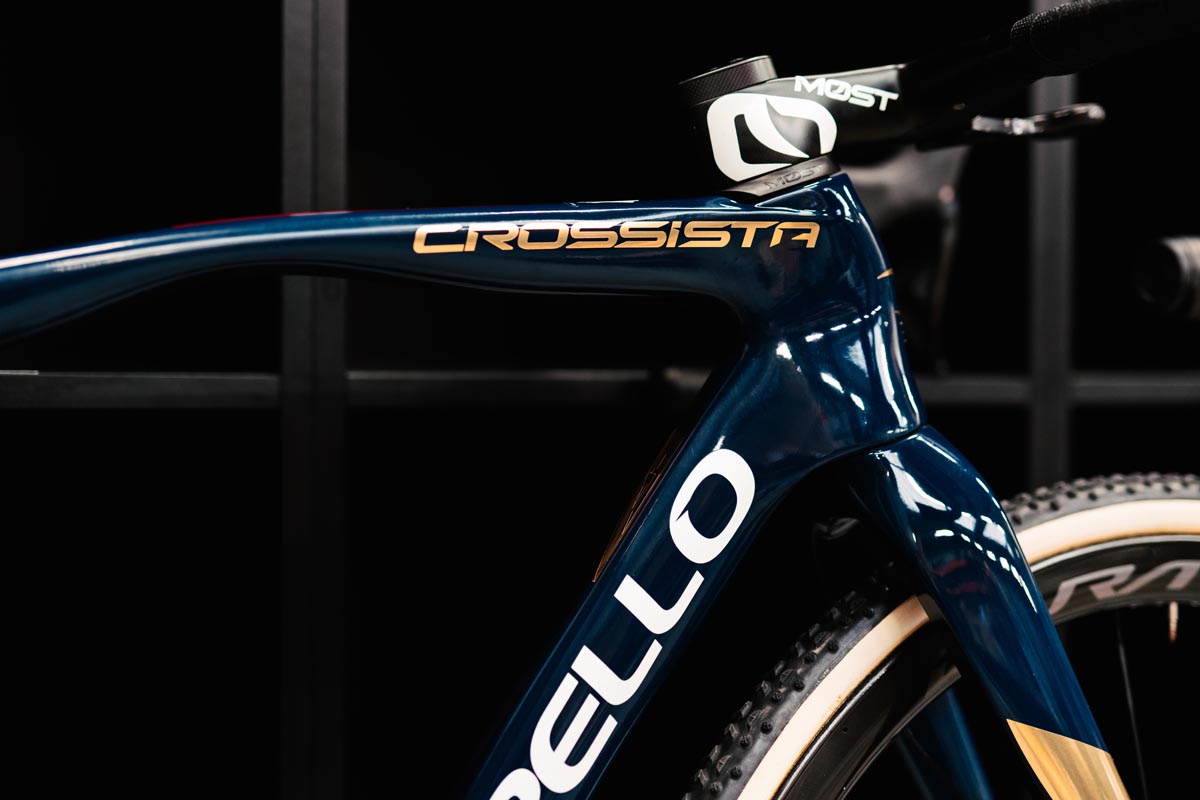 And since this is a cyclocross race bike for the highest level of competition (complete with your own personal mechanic), the Crossista F has updates to the internal cable routing which allow for completely hidden wires and hoses up front. Additional water drain holes have also been added to the frame because CX. 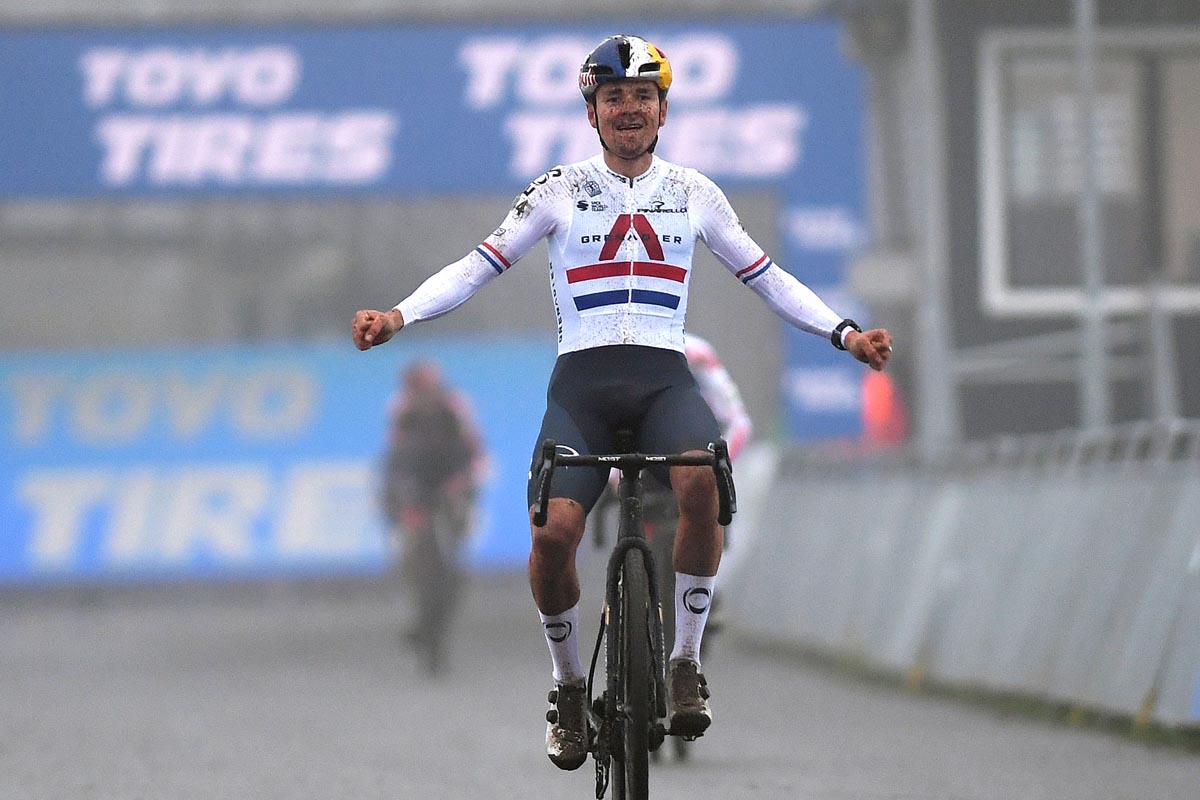 Impressively, the first prototypes were turned around by September 2021, with another version delivered to Tom just in time for his CX debut in Boom. The bike (and Tom) seems to be working out great with it already securing five podiums including his first victory at a Men’s Elite CX world cup in Rucphen in December. To prove it wasn’t a fluke, he followed up with a second victory in January in Hulst. 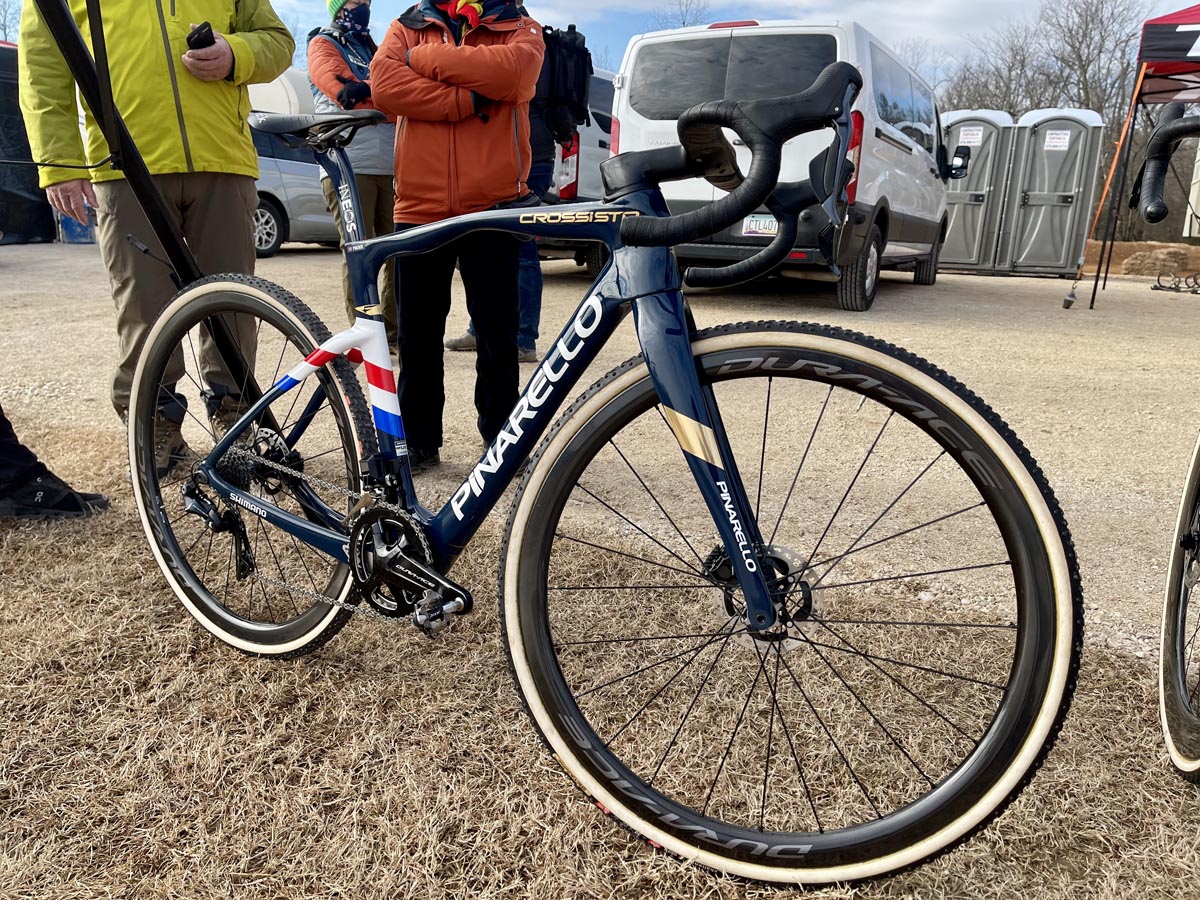 All of that brings us to today, with Tom and his team on the ground in Fayetteville, AR to compete in the World Championships. Pinarello says that testing to this point led to another change in carbon layup before what could be the production bike was built up and delivered to Tom in time for the race. Fortunately, our resident CX expert Jordan Villella is in Arkansas to cover the event and snapped these photos of Tom’s latest bike. According to Pinarello, the bike weighs in at 7.39kg (16.29lb) in the official team’s race configuration. 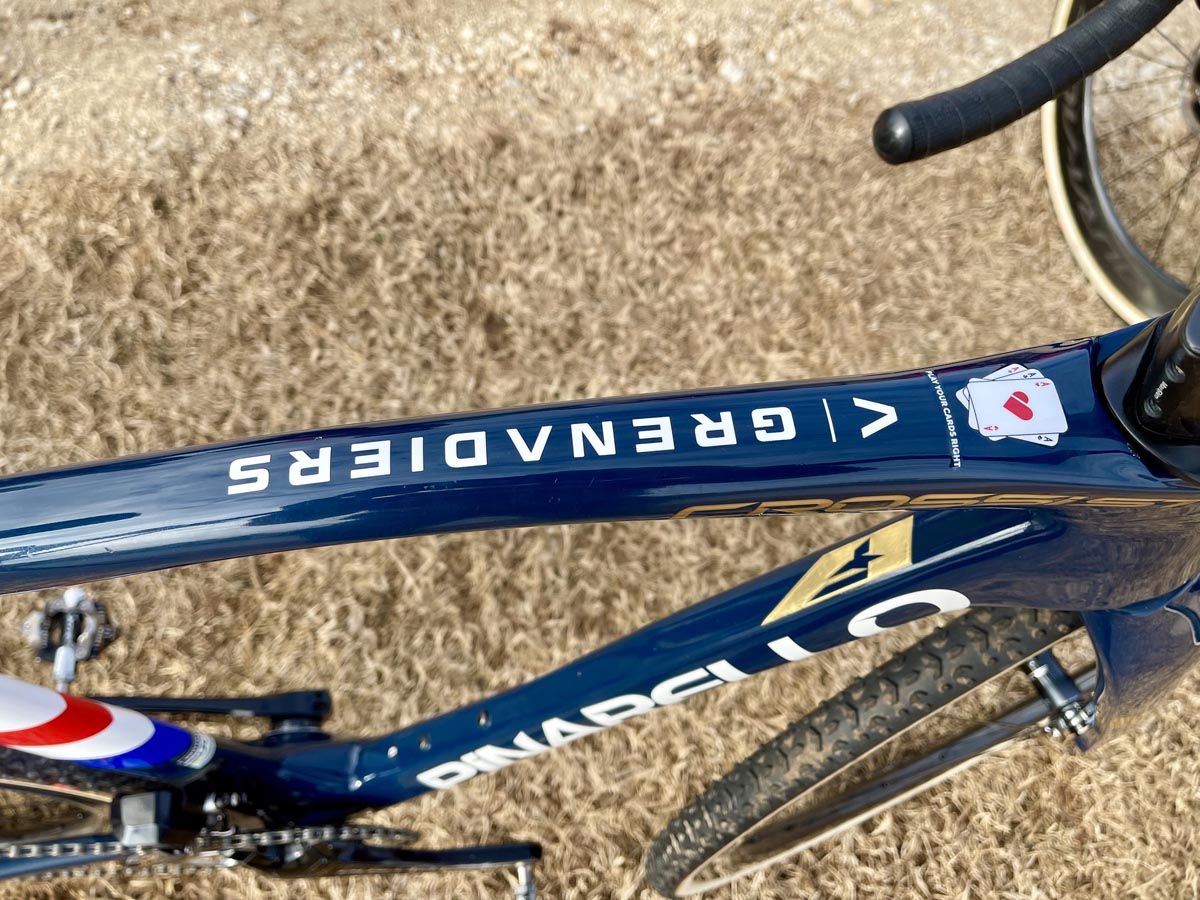 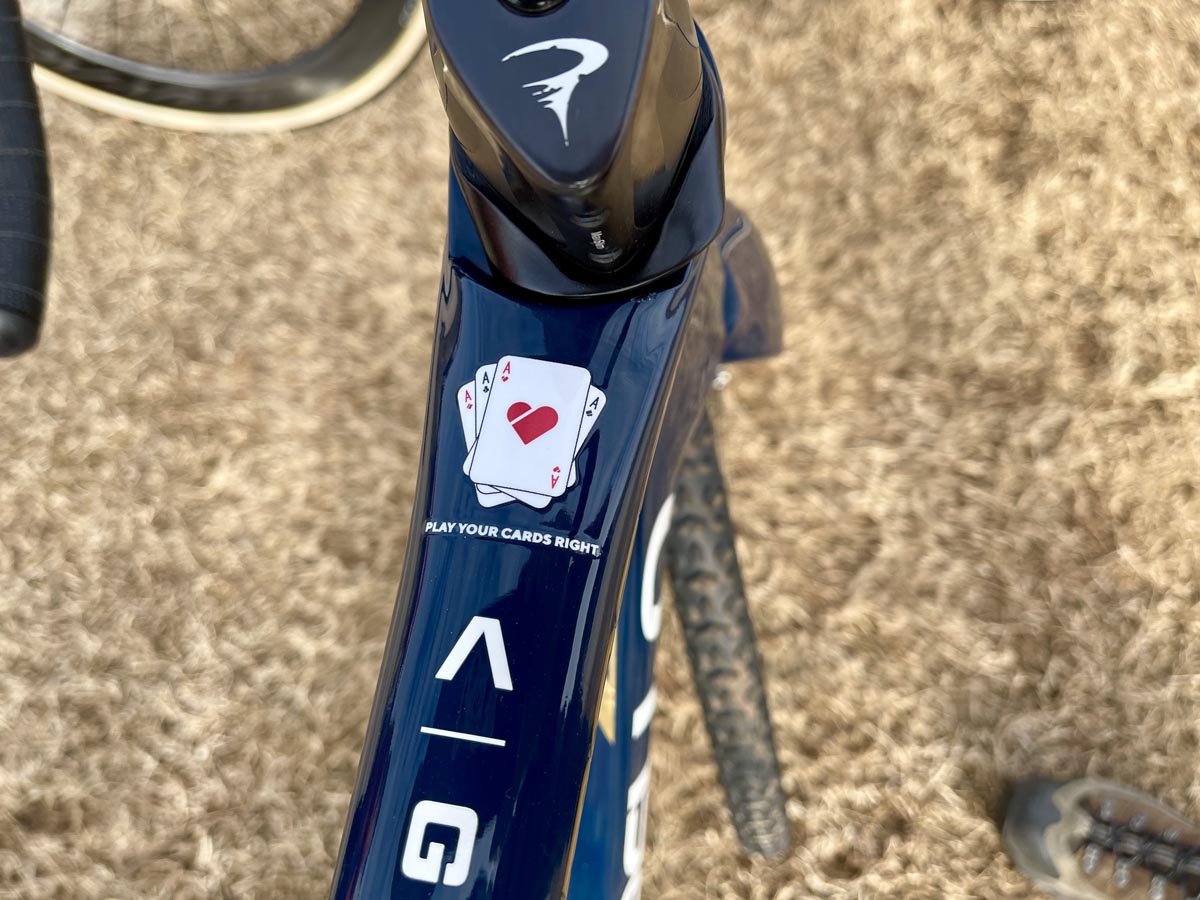 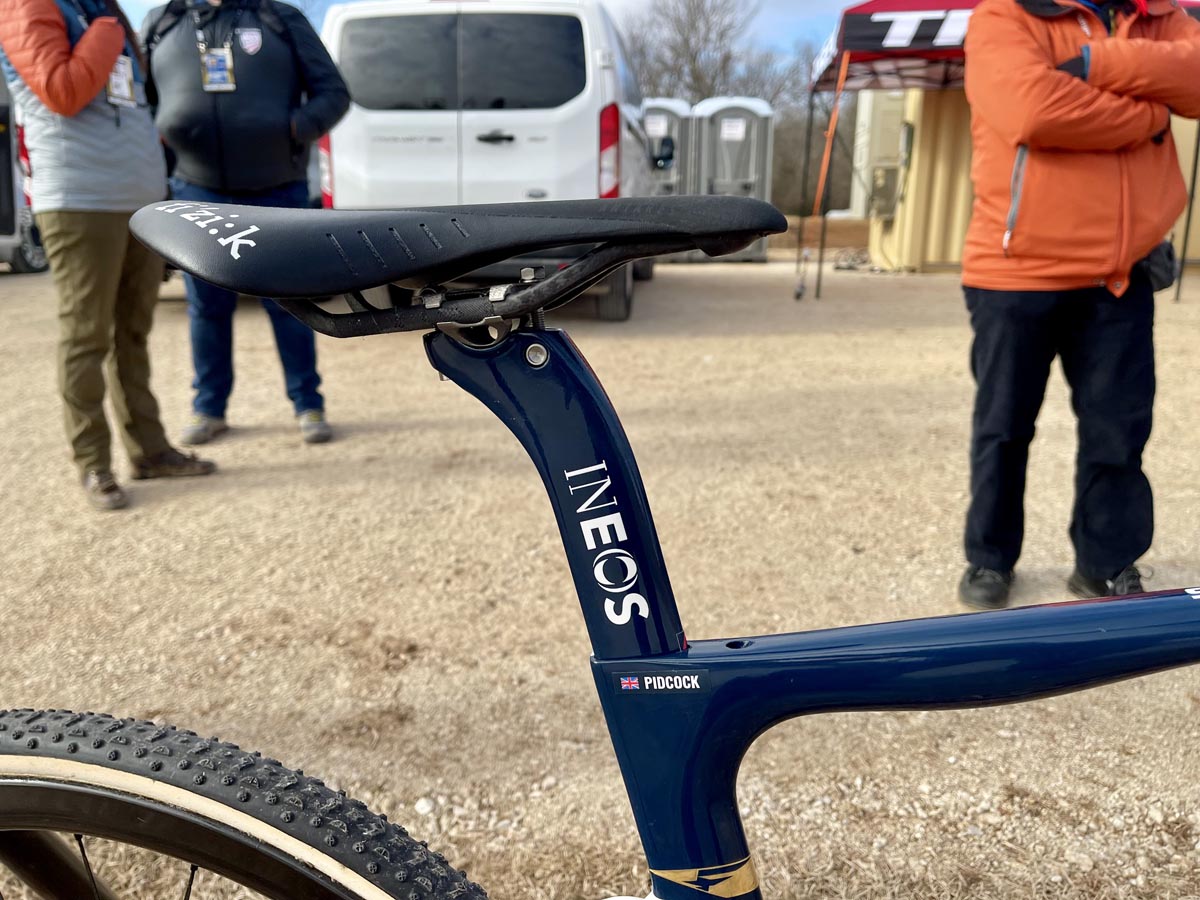 There are some interesting details in the paint work—will Tom play his cards right this weekend and become world champ? Also, even with the new geometry he apparently likes to run his seat very far back, even with a setback post. 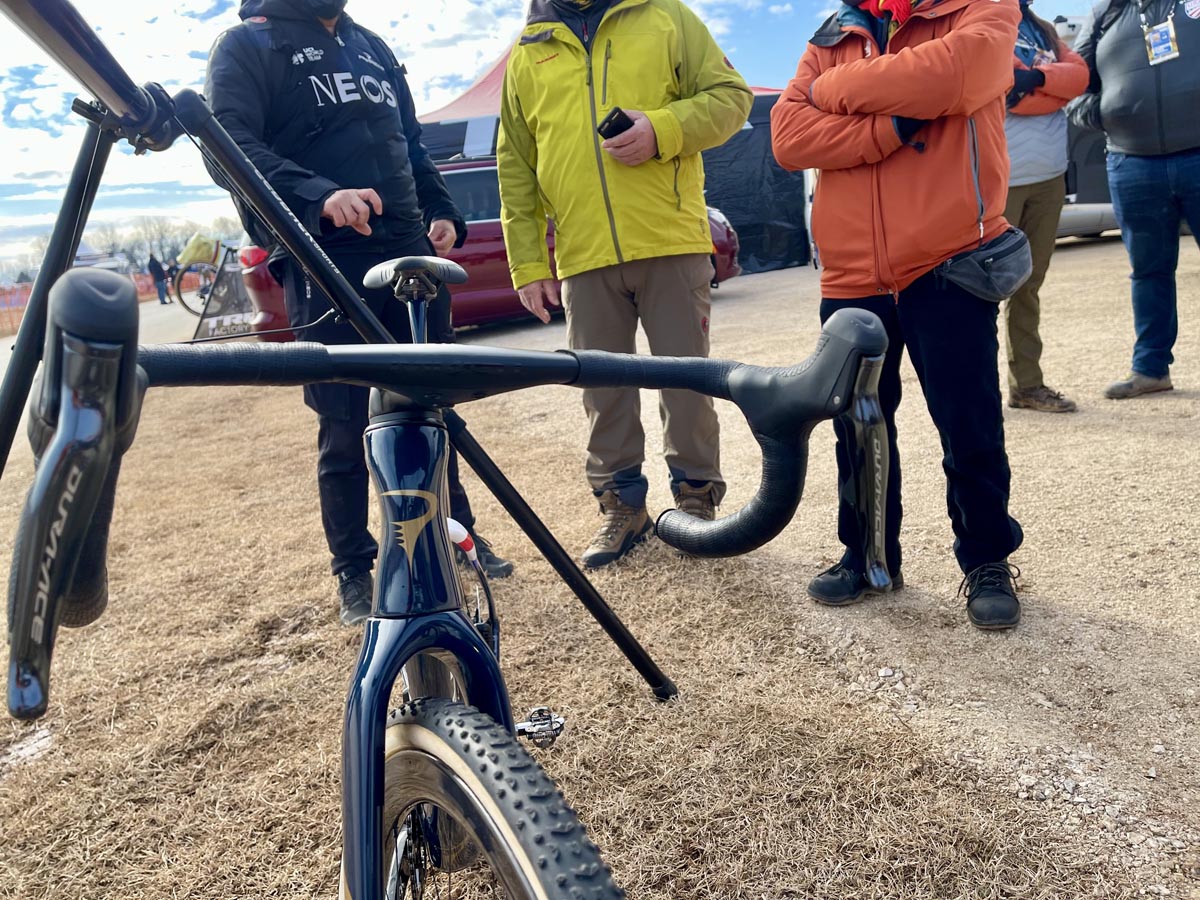 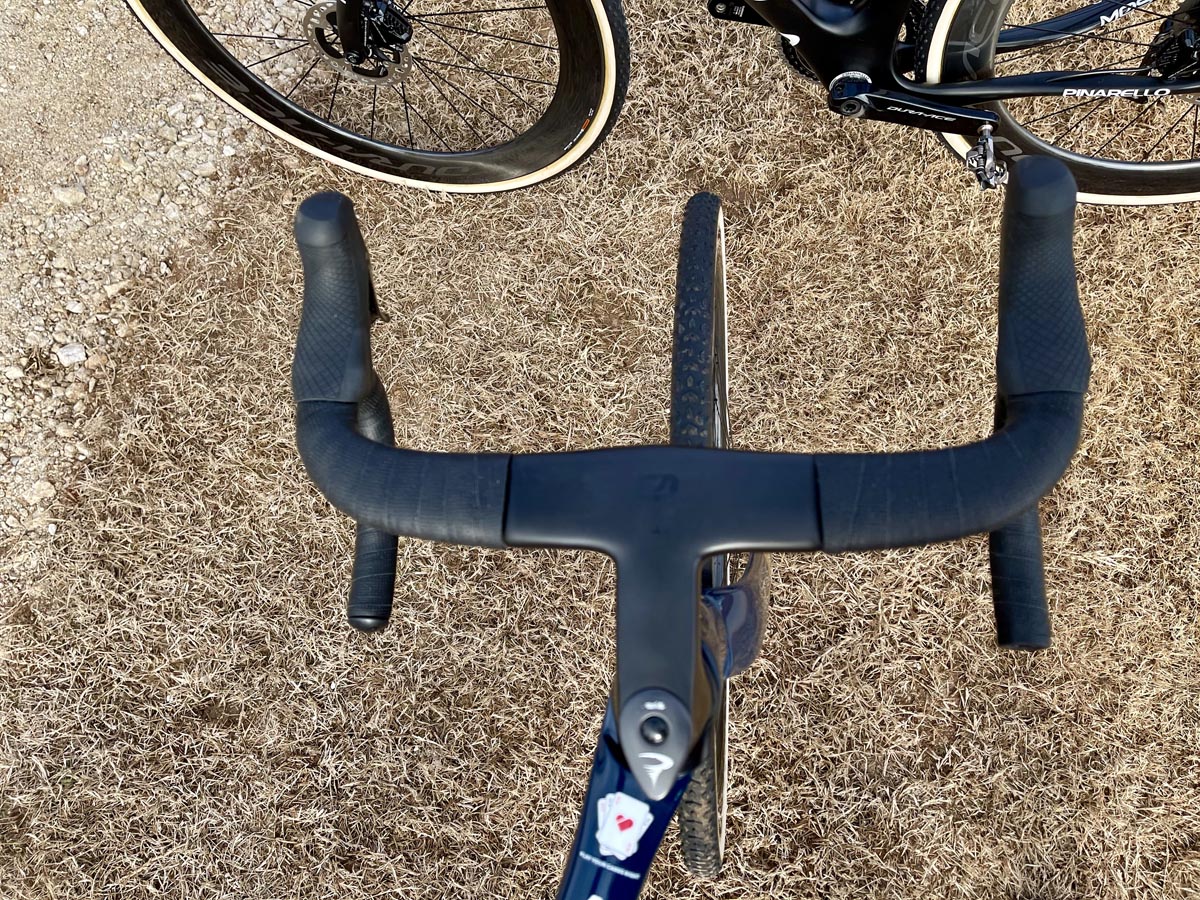 Thanks to the hidden hoses and wires up front, the cockpit is super clean. 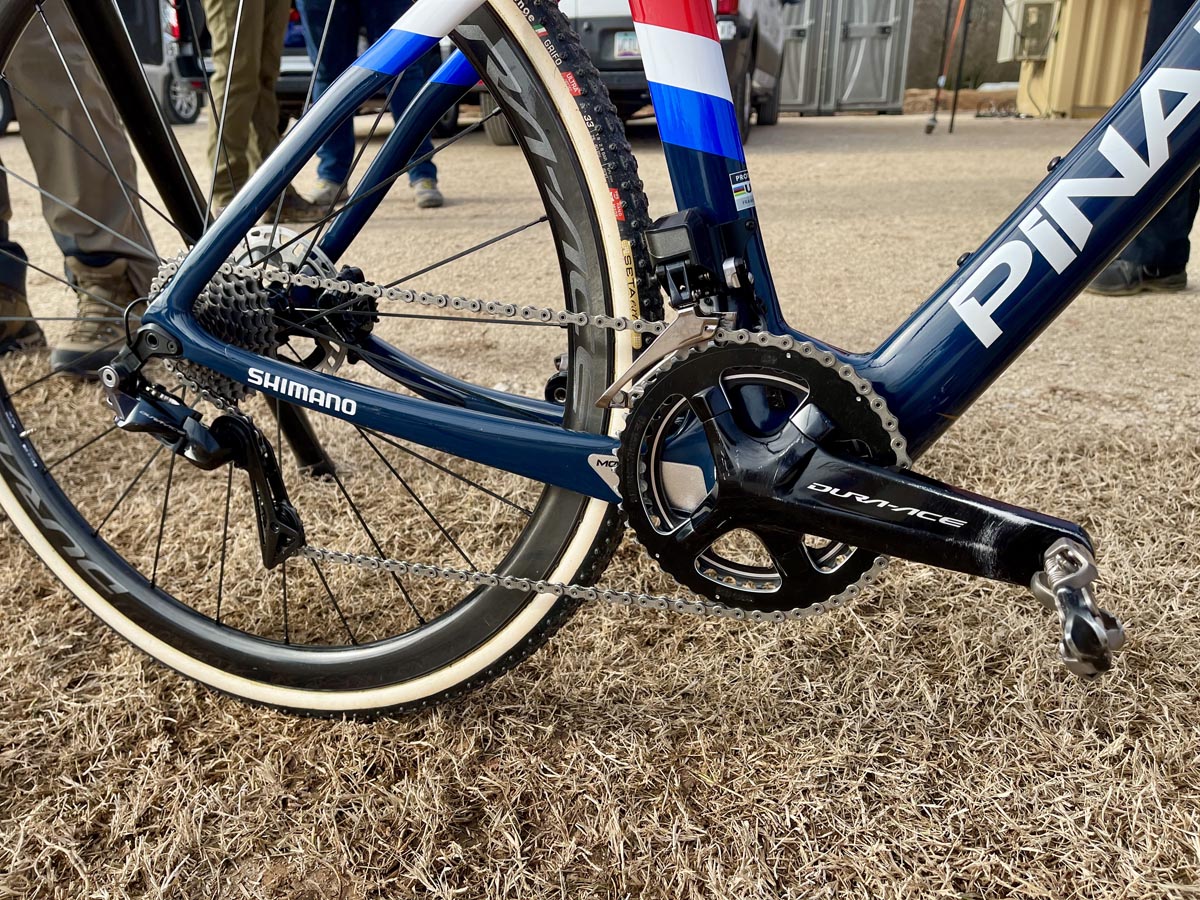 From the looks of it, Tom is still riding 11-speed Dura-Ace with custom CX-specific chainrings. 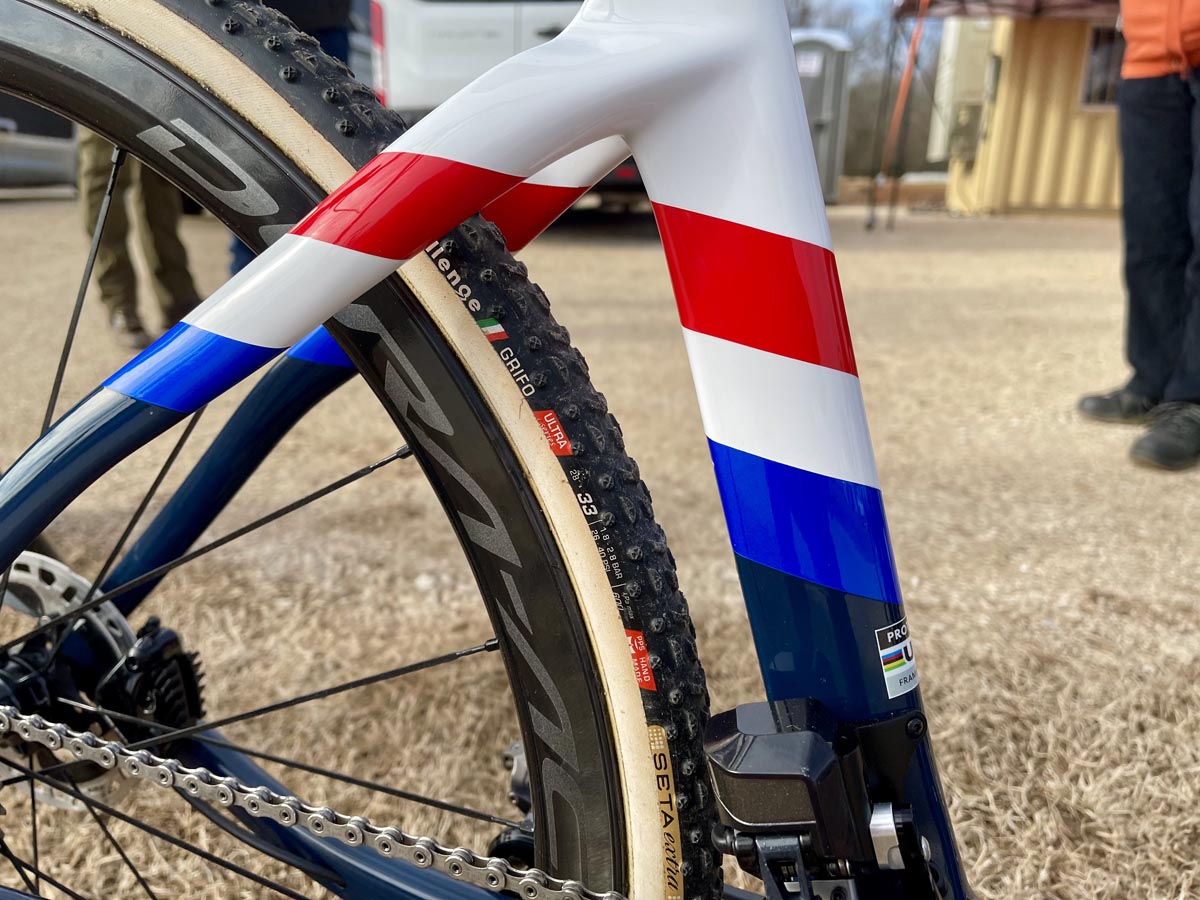 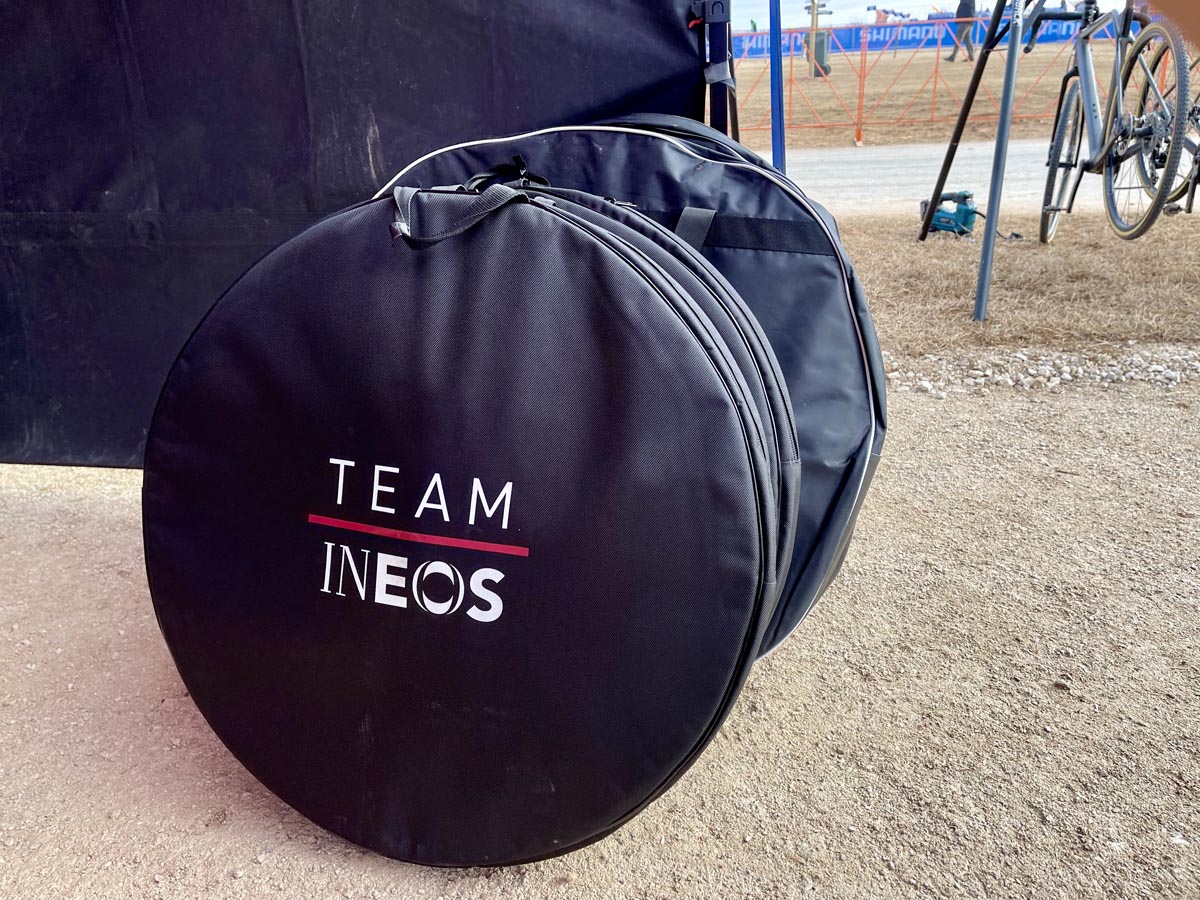 Wheel and tire choice for race day is still a mystery, but at the time this was running Challenge Grifo Ultra 33s on Dura-Ace wheels. 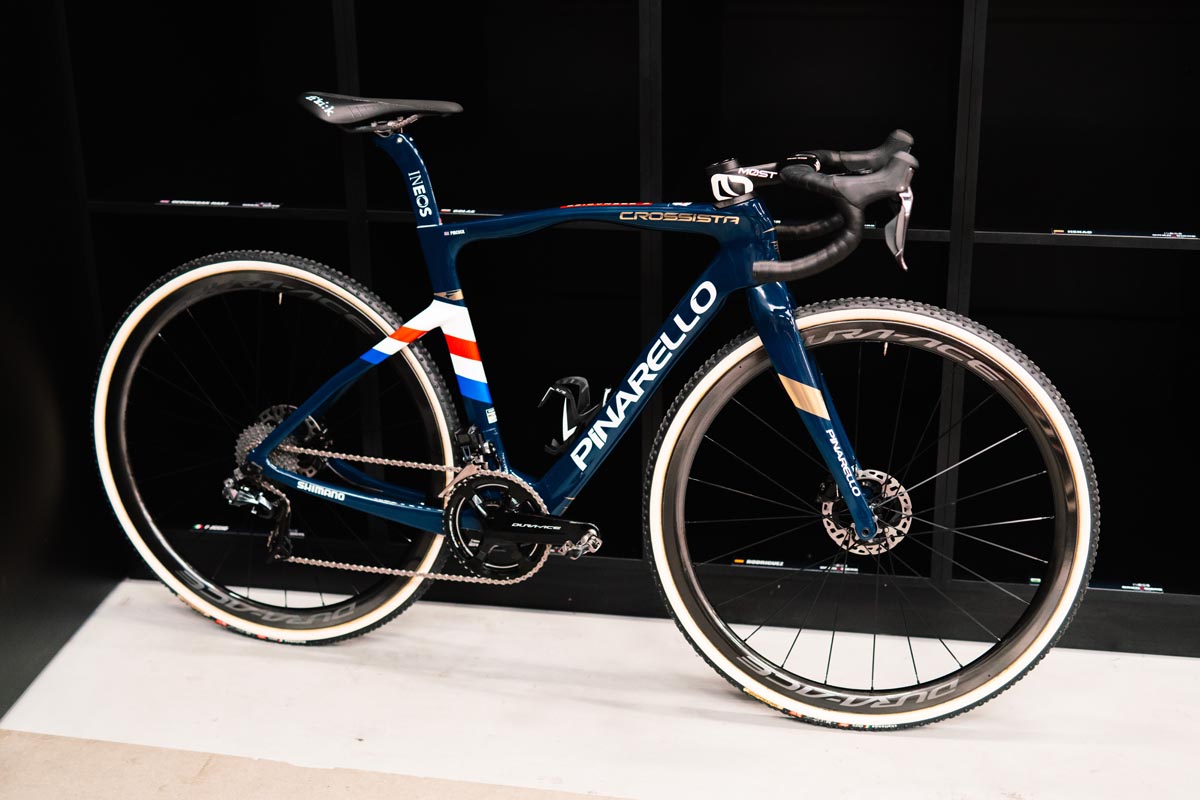 Want a Crossista F of your own? Pinarello says that the first commercial versions will be available late 2022 in the Tom Pidcock replica color above, as well as two additional colors released later this year. For more on the bike’s release, check out the ‘making of’ documentary which will be unveiled tomorrow.