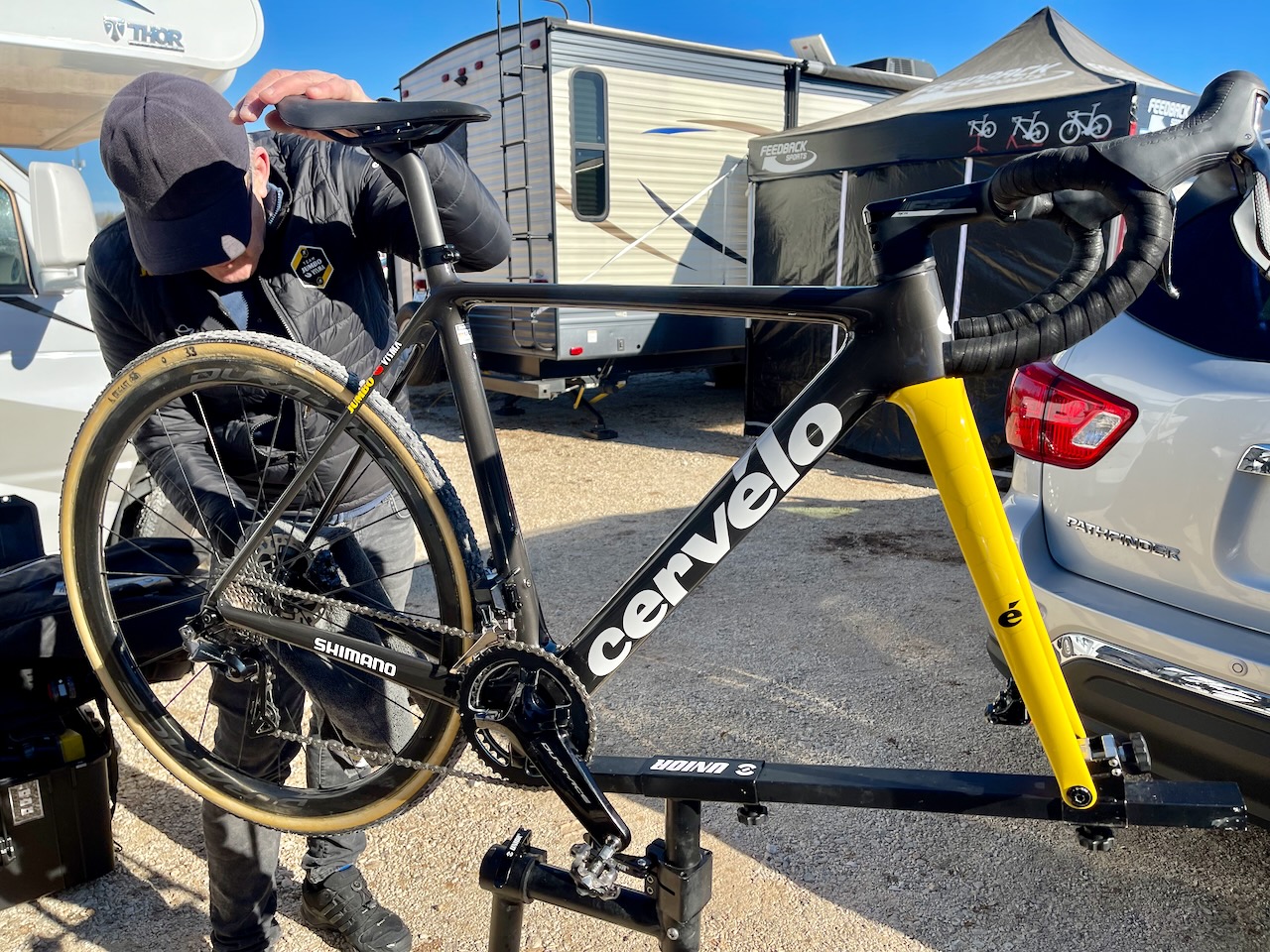 In many ways, the 2022 Cyclocross World Championships were one for the history books. It’s only the second time the event was held on US soil, and the first time an athlete would win the rainbow stripes for a record eighth time.

That athlete is no other than the legendary Marianne Vos, who is undoubtedly one of the best ever to touch a cyclocross bike (or road bike). Vos came into the race a favorite, but her compatriot Lucinda Brand claimed victory at the US Fayetteville World Cup earlier in the season and posed a real threat. 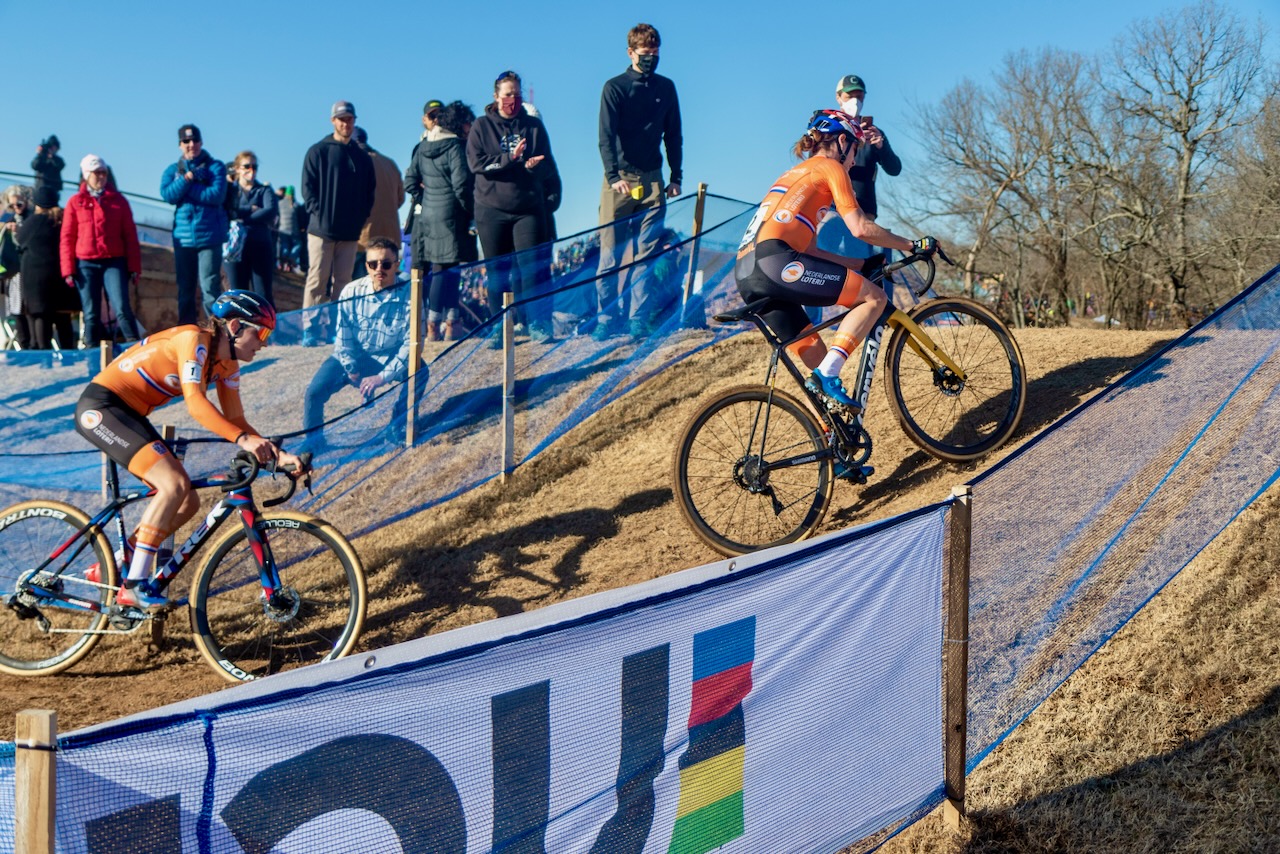 From the first lap, it was clear that the Dutch team was the most powerful, with three former world champions on the front; Vos, Brand, and Alvarado. The trio did their best to burn off anyone attempting to match their blistering pace, quickly successful in their efforts. 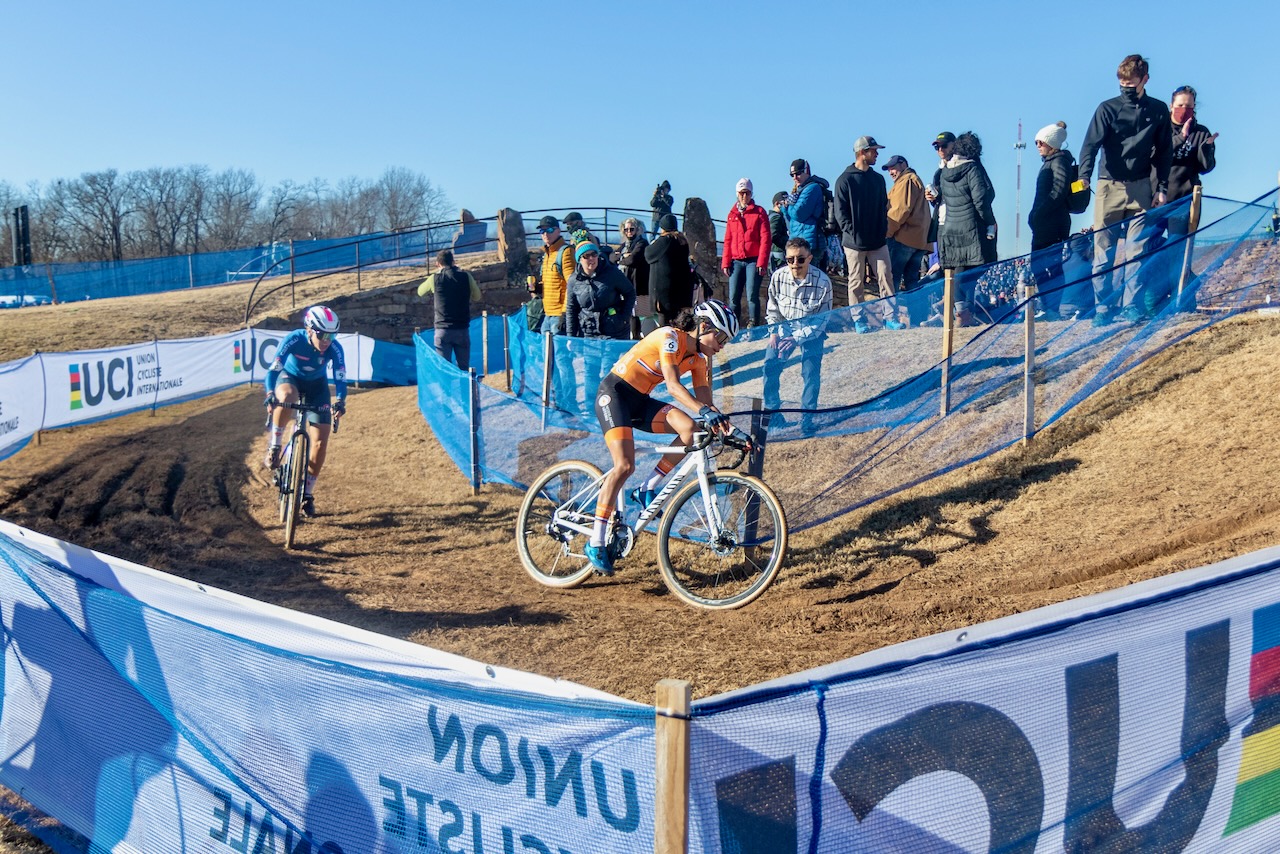 Only after four laps of the 3.1km course would the Dutch see another added to their group. The chaser Silvia Persico of Italy would only make it close enough to see Alvarado exiting the corners, and the duo of Vos and Brand were already seconds ahead.

Brand and Vos were locked in battle from the fourth lap on, never relenting but not working more than required. The riders tried to detach each other at critical features, whether the brutal 38 stair run-up or the vicious off cambers, they were joined at the wheel till the very end. 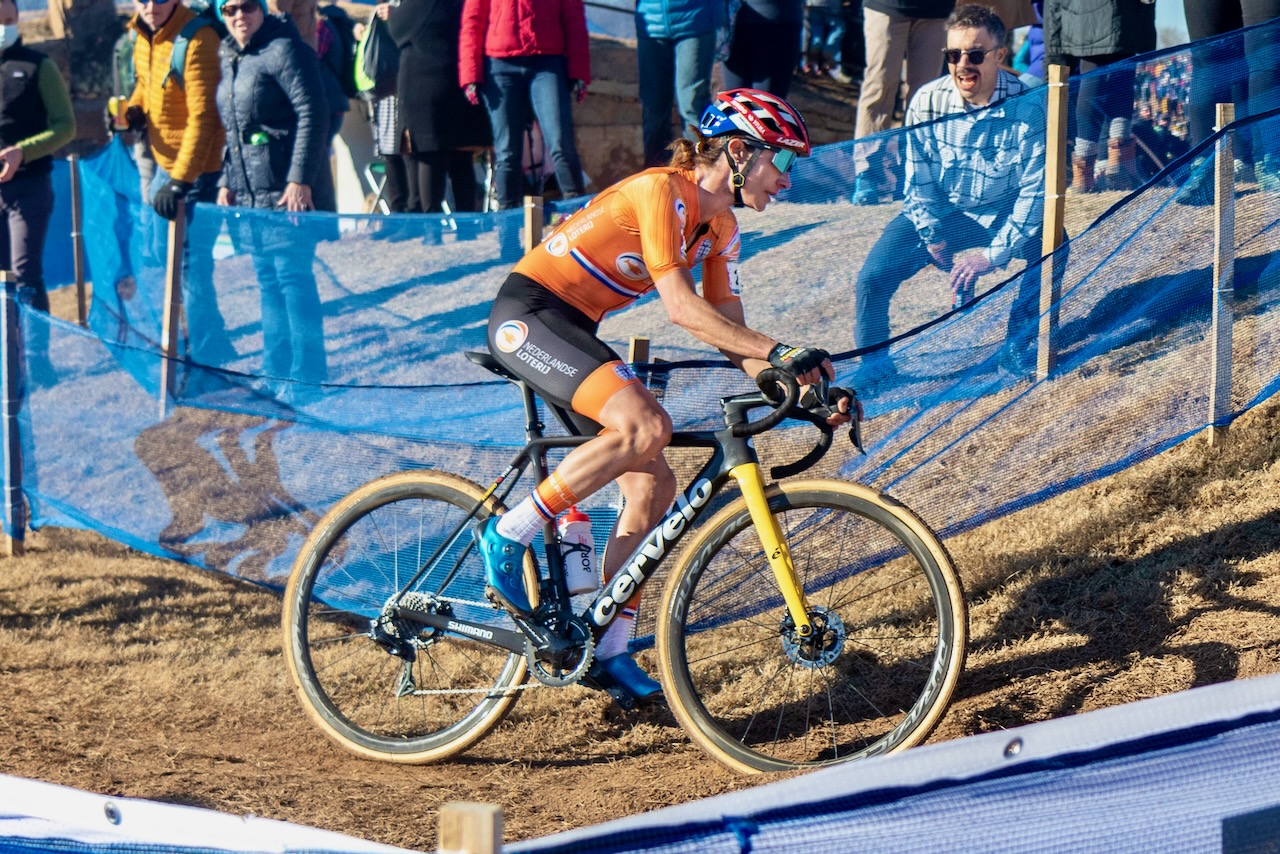 At one point late in the race, Brand nearly came to a standstill, baiting Vos to pass and lead out the inevitable sprint finish. In the end, it came down to a head-to-head charge to the line, Brand leading out Vos. Brand led Vos coming down the final rolling hill, but it was only a matter of time for Vos to pop out from the draft and jump Brand for the victory. After a bobble late in the final lap, Alvarado was caught and passed by Italy’s Silvia Persico, disrupting another Dutch podium sweep. 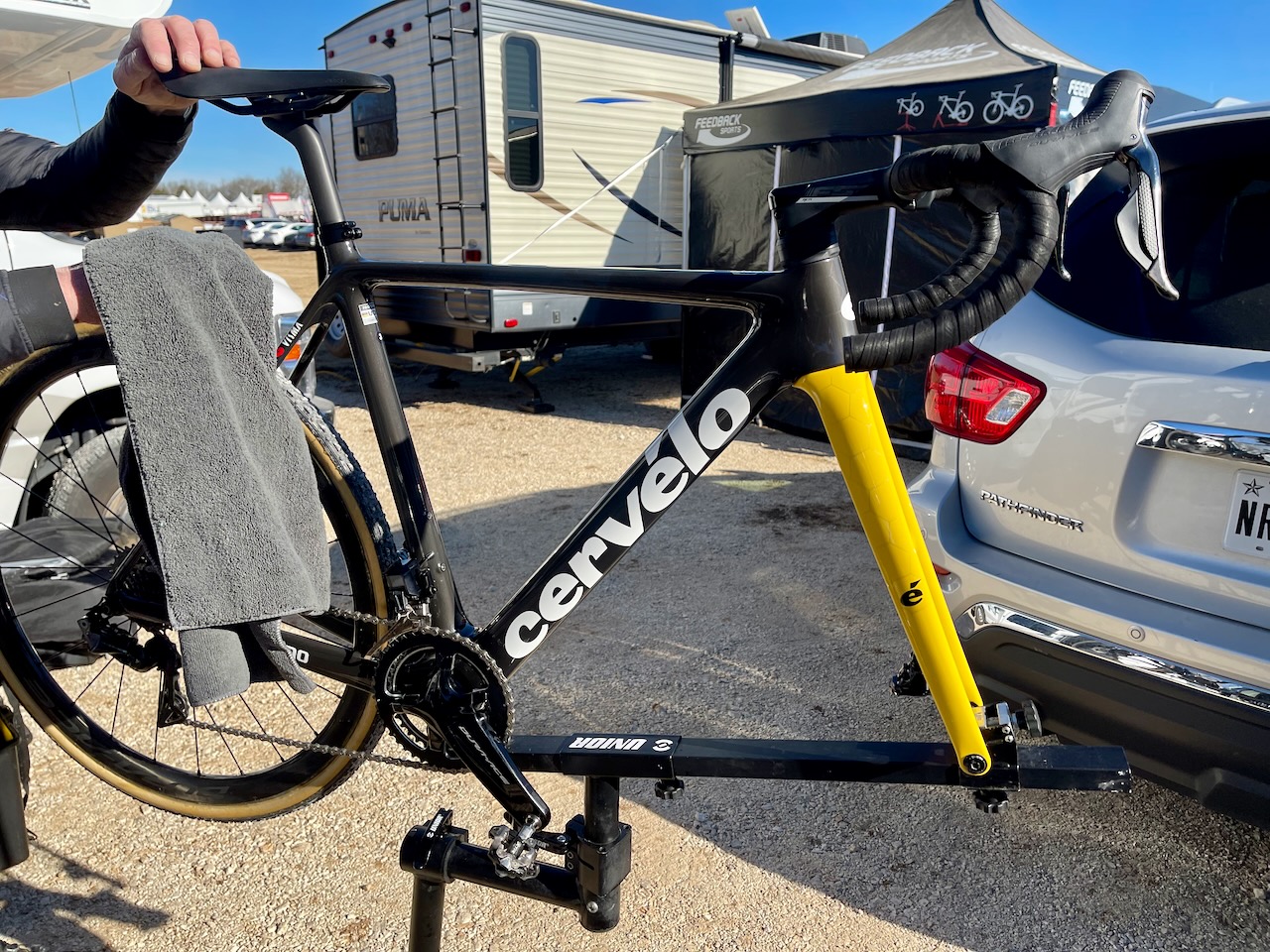 Cervelo’s R5-CX is a new addition to the Cervelo line and is the bike choice for Team Jumbo-Vismas’ Wout van Aert and Marinna Vos. The bike comes after a long-vacant spot in the Cervelo line for a dedicated cyclocross race machine. 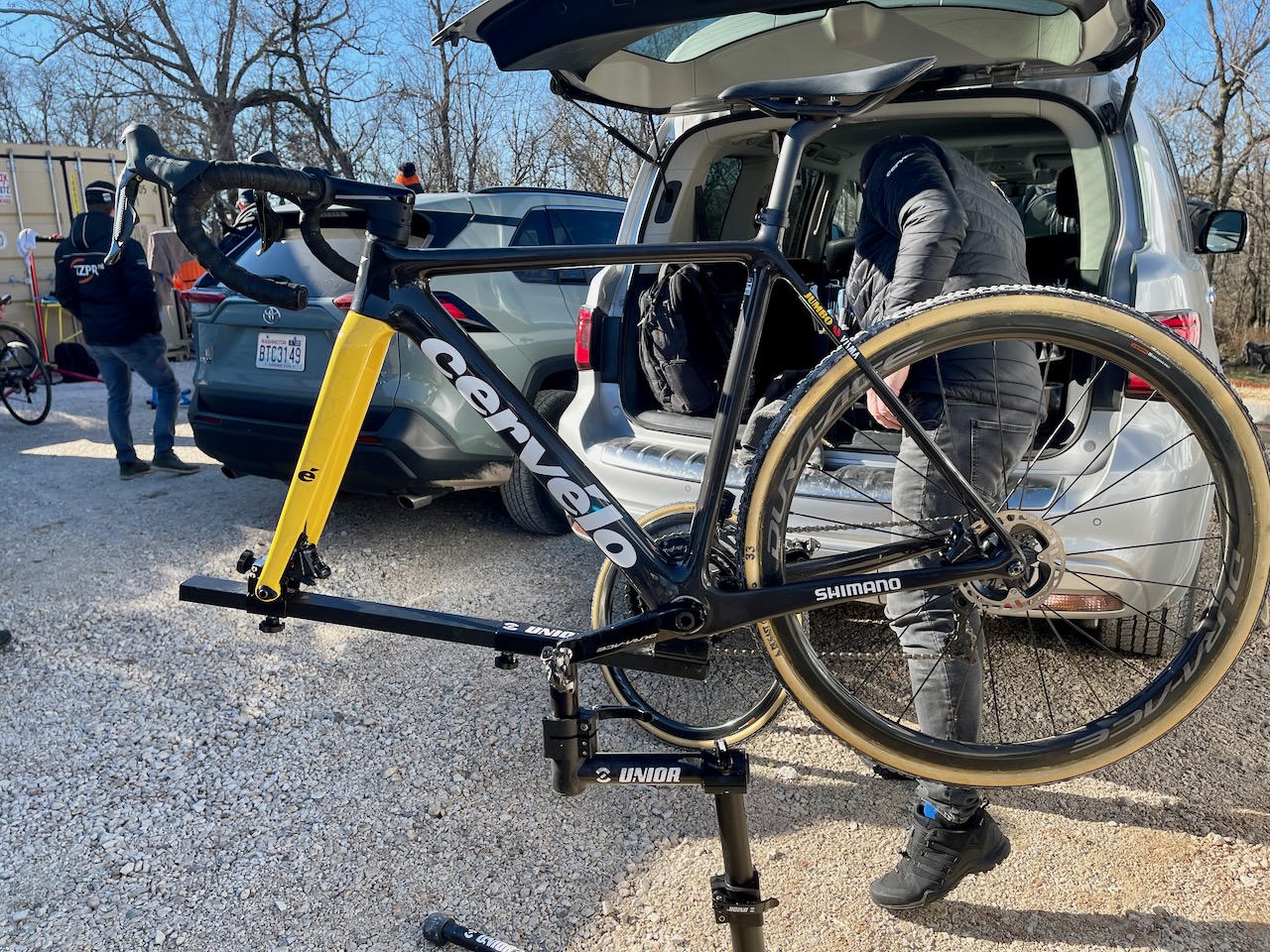 Vos’ Cervelo R5-CX has a setup similar to the prototype we saw her riding earlier this cyclocross season. 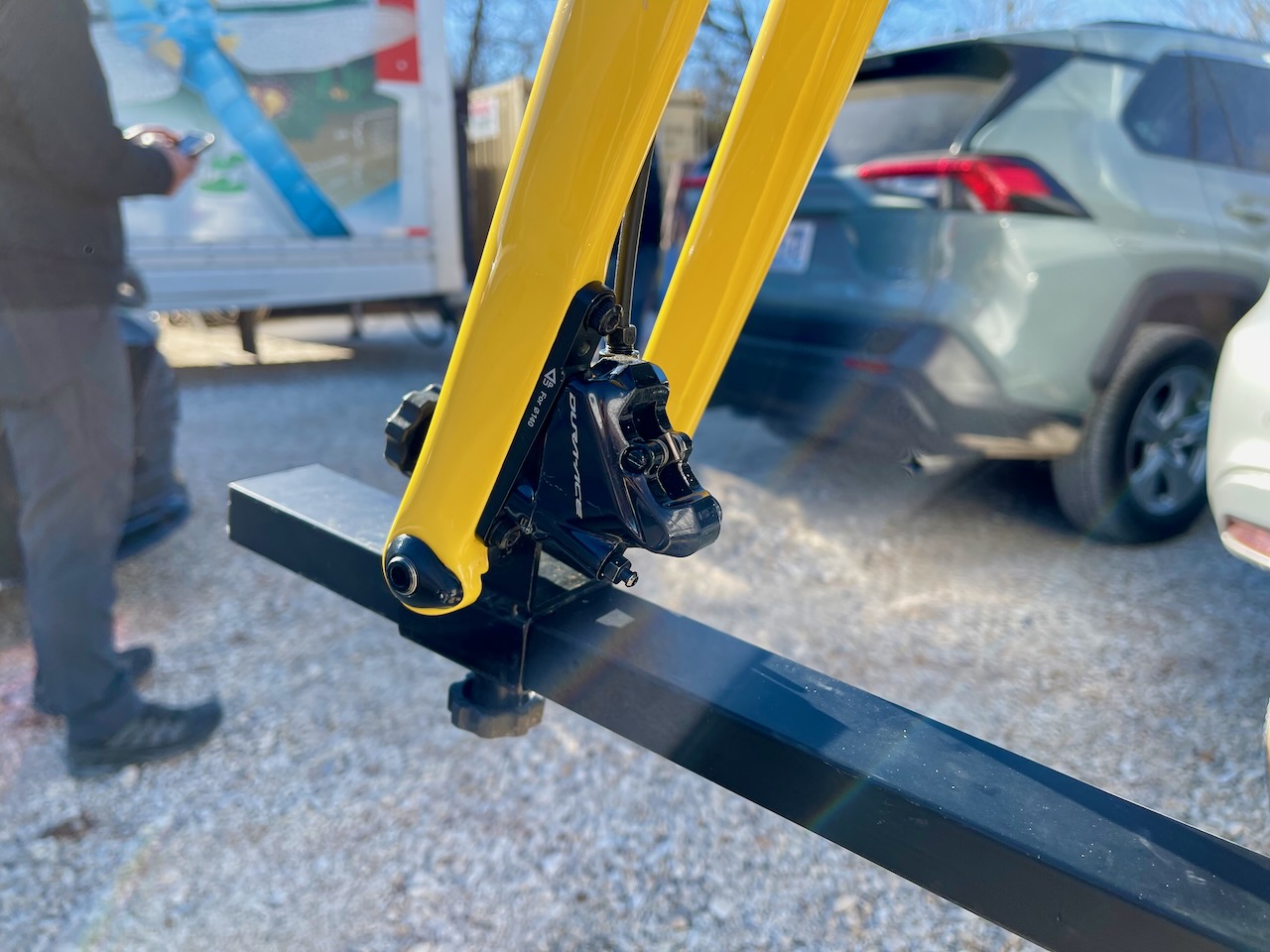 Like some (if not all) of the Shimano-sponsored athletes we spotted at Cyclocross Worlds, Vos was running Shimano Di2 11spd groupsets and not the newer 12spd groupset. 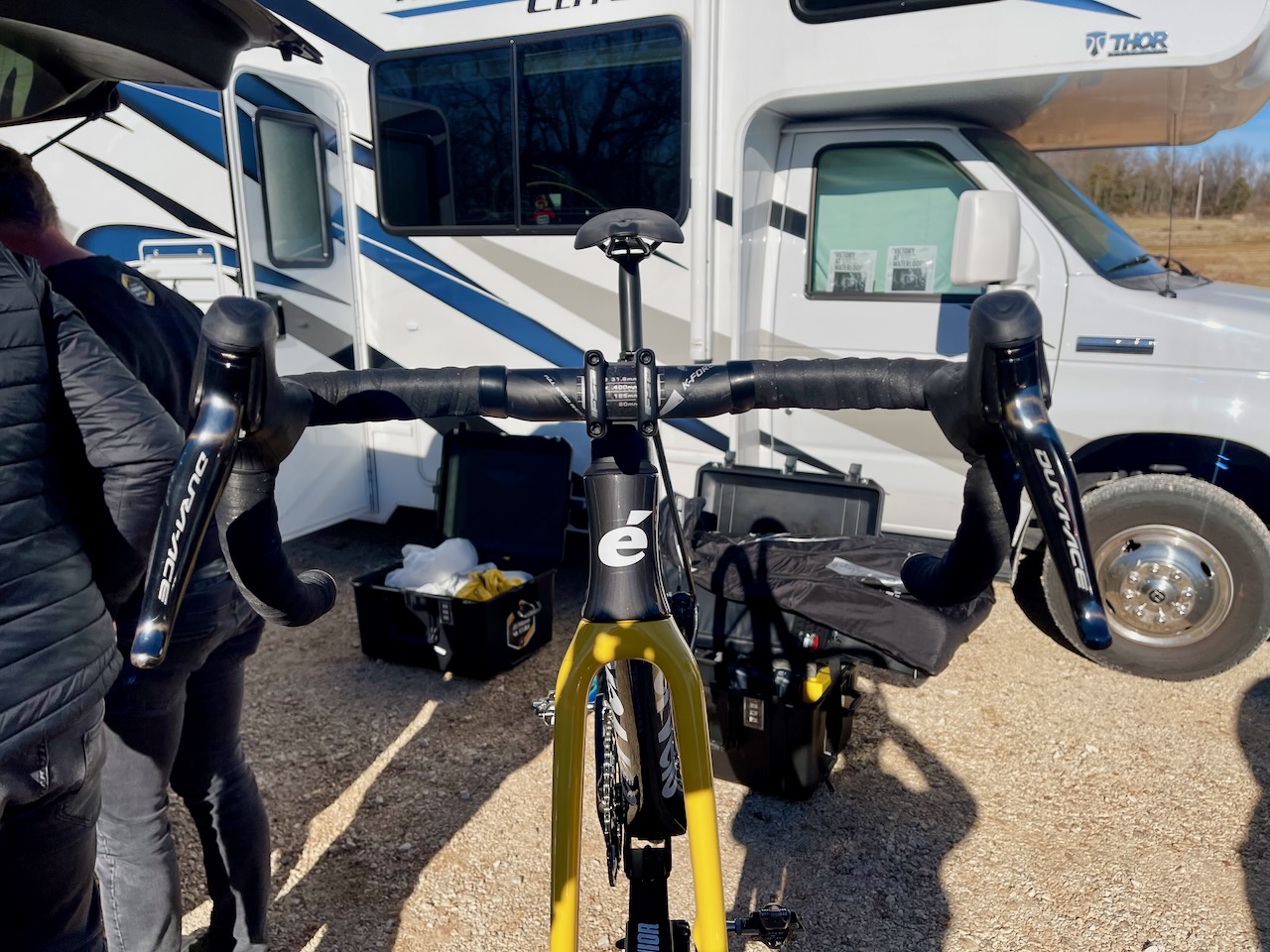 Vos runs a 440mm width FSA K-Force carbon bar and some slick internal cable routing via the FSA ARC stem. The K-Force bar has a shallow 125mm drop and a slight outward bend at 4° — great for sprinting. 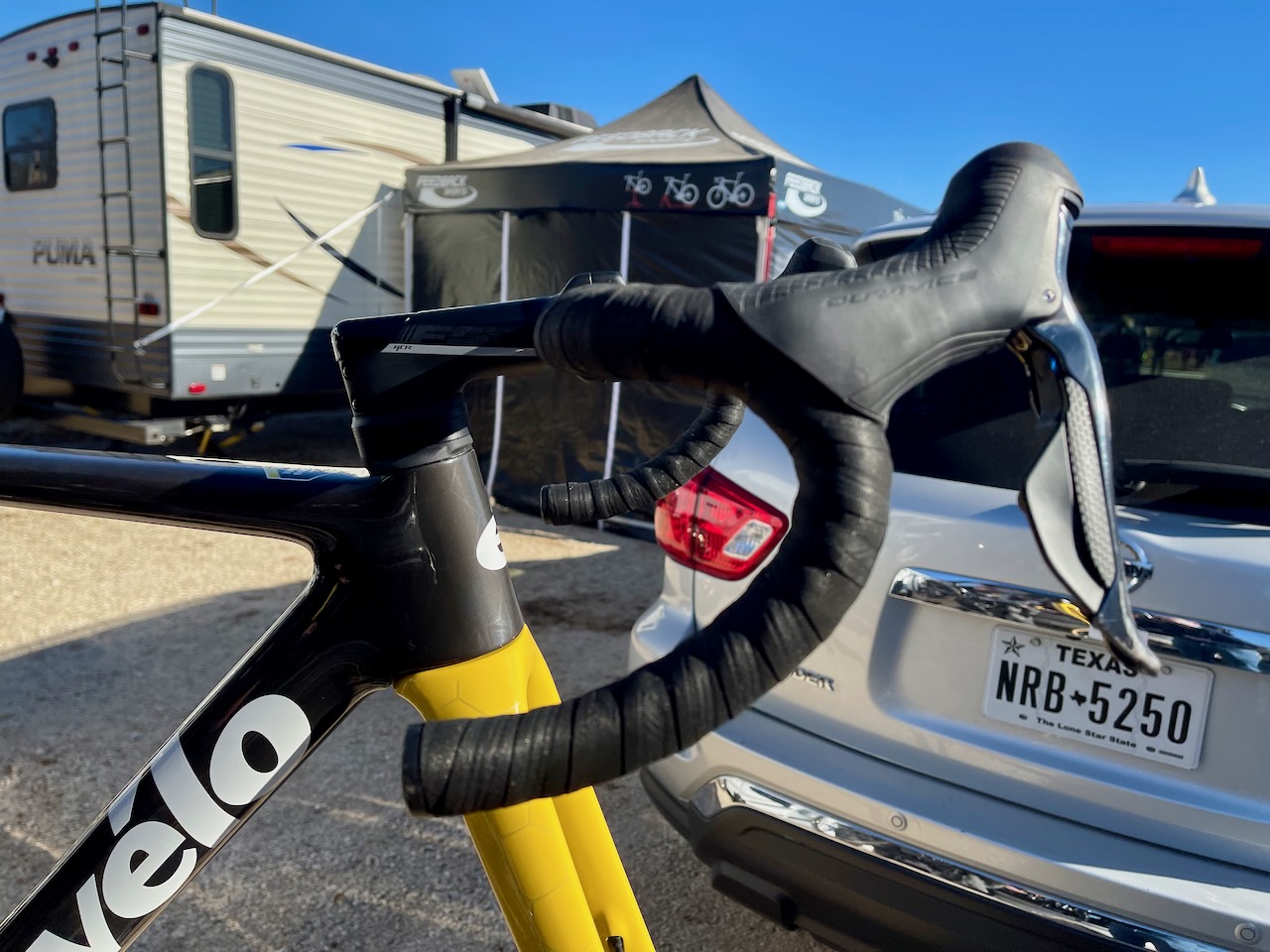 The complete shifting and braking kit is Shimano Dura-Ace Di2 9100, with some smaller rings for the hilly Fayetteville Worlds course. 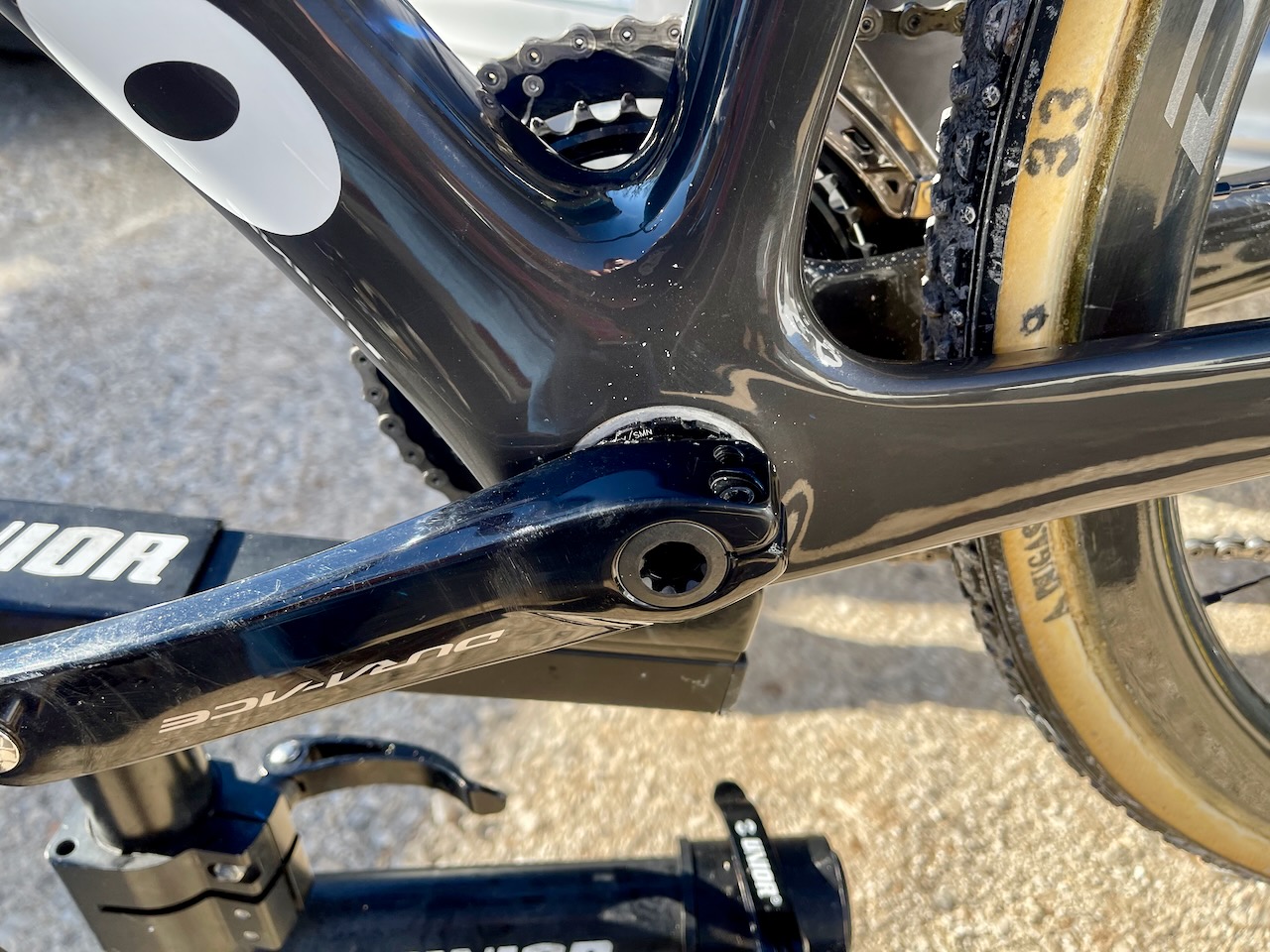 Vos opted for a 44/39 combination instead of the 46/39 she runs on flatter courses. The chainring is unbadged but looks very similar to a “the mechanic parts” chainring we’ve seen on others that prefer a double setup. 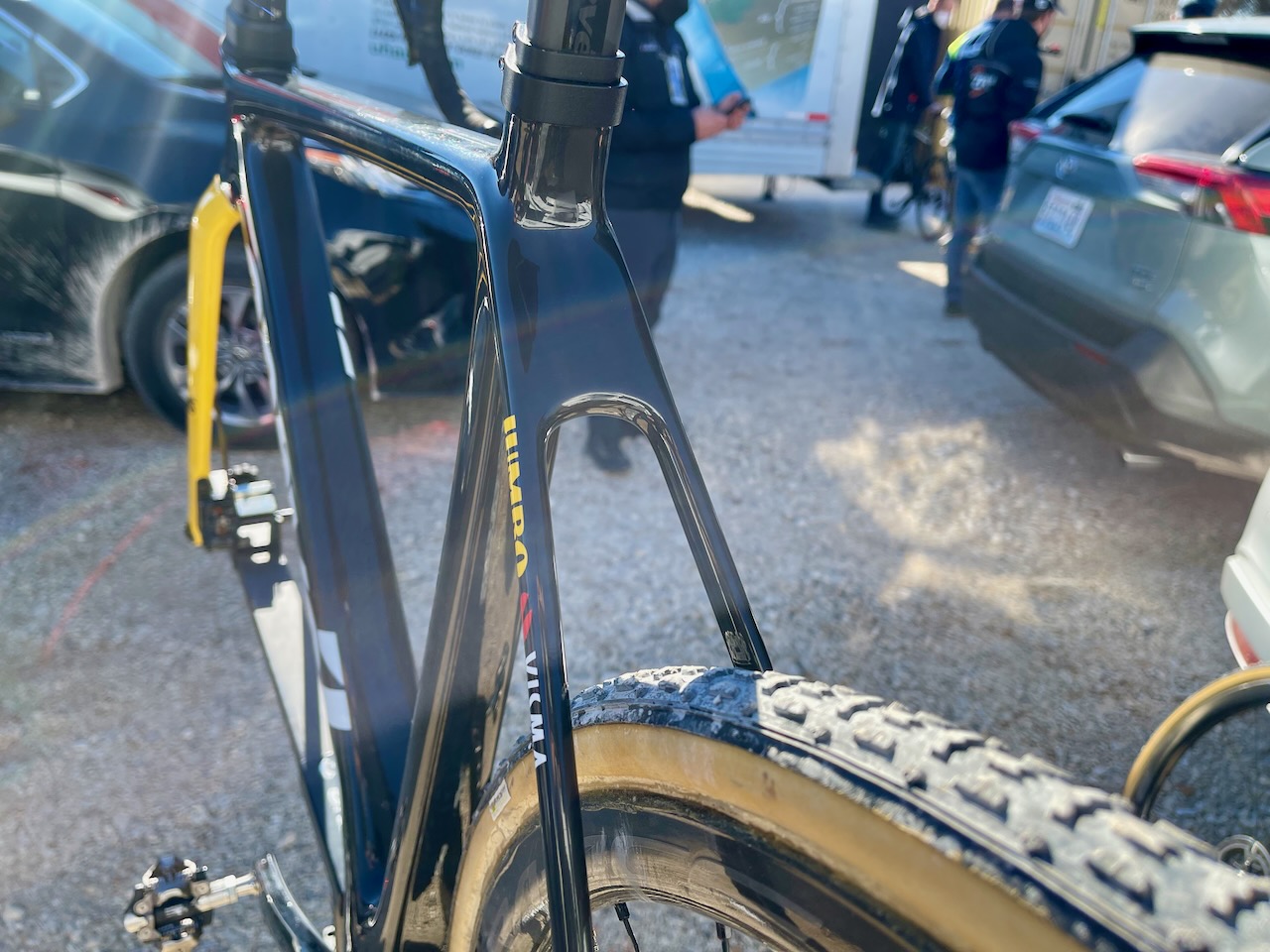 Rounding out the build is a freshly raced set of A. Dugast 33mm Typhoon tubulars. The design allows for maximum traction in the off-camber sections, with very little rolling resistance on the pavement. The Typhoon tread was a favorite for nearly all athletes riding Dugast tires.