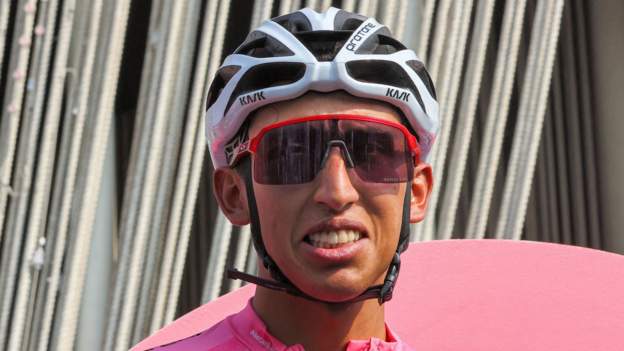 Ineos Grenadiers’ Egan Bernal has left hospital as he continues to recover from multiple operations after a high-speed crash in his native Colombia.

The 25-year-old said he nearly died after he hit a stationary bus while riding his time trial bike in January.

He had neurosurgery, spinal surgery and other procedures after he sustained back, leg, knee and chest injuries.

Bernal is the reigning Giro d’Italia champion and became the first Colombian to win the Tour de France in 2019.

On Friday, he said the accident had left him with a 95% chance of becoming a paraplegic, but such has been the success of his medical treatment, he was pictured standing with hospital staff while wearing a neck brace on Sunday.

“We’re happy to report that Egan Bernal has been discharged from hospital today,” his Ineos Grenadiers team said on Twitter.

“Egan will now return home to begin his long rehabilitation journey – and we’ll be supporting him every step of the way.”

Neither the clinic nor his team have given any indication of when the 25-year-old Bernal might be back on his bike.