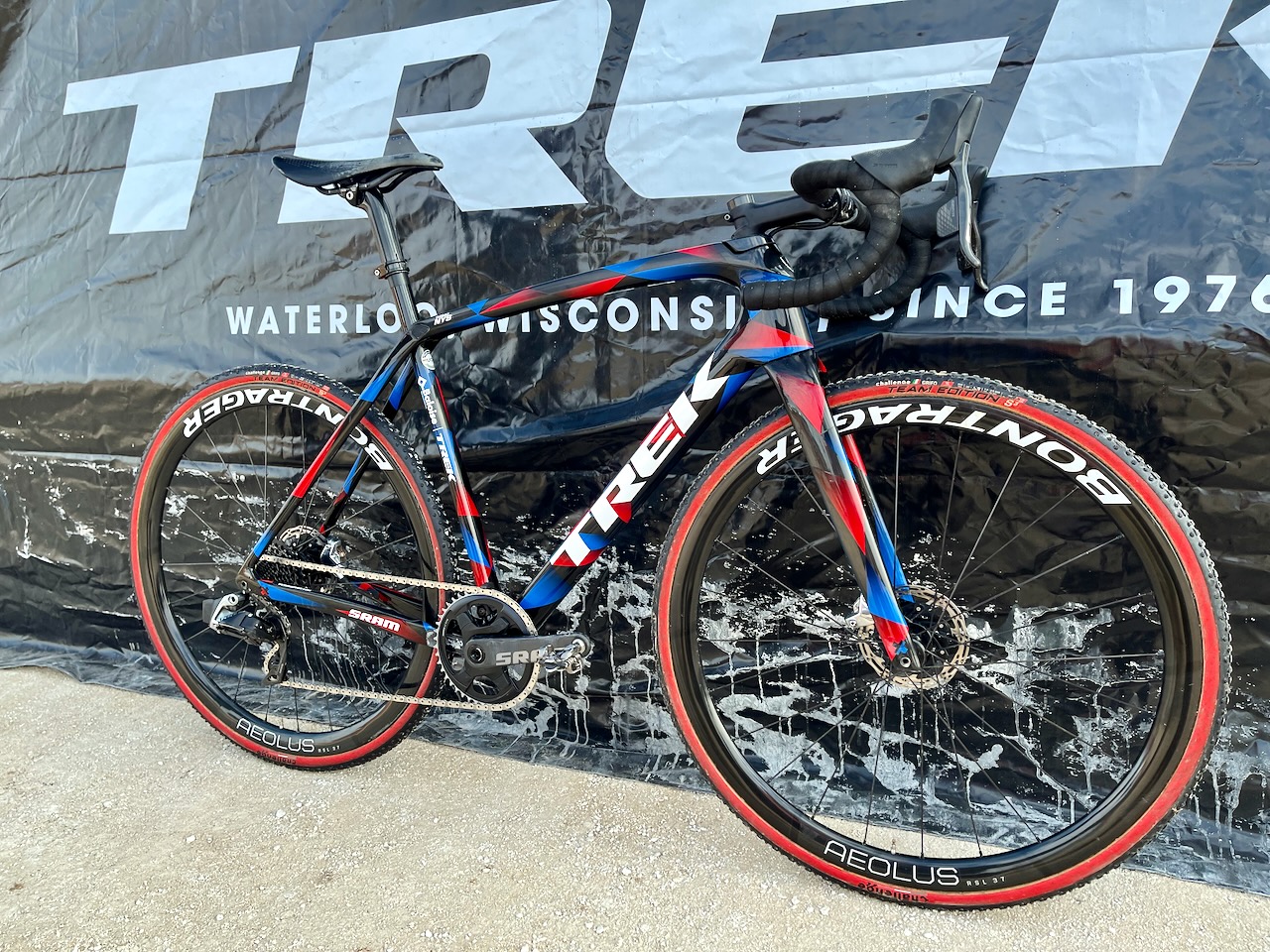 If you’re a cyclocross or cycling fan, the last name Nys should ring some bells. First, Sven Nys might come to mind, but quickly another name is becoming popular, his equally talented and charismatic son — Thibau.

The name should be familiar to most. He’s already won a cyclocross world championship (Jrs in 2020) and is climbing to the top of the ranks as quickly as he moves to a new age category. Early in the season, Thibau was a top pick for a podium and possibly the win for the U23 2022 World Championships in Fayetteville. As the cyclocross season unfolded, Thibau had both ups and downs. He suffered a broken collar bone while competing at the Trek World Cup — sliding on a rain-saturated pavement section into a barrier. Putting a question mark on his trajectory in the elite ranks and the ability to climb back to his prior fitness as the season had only just started. 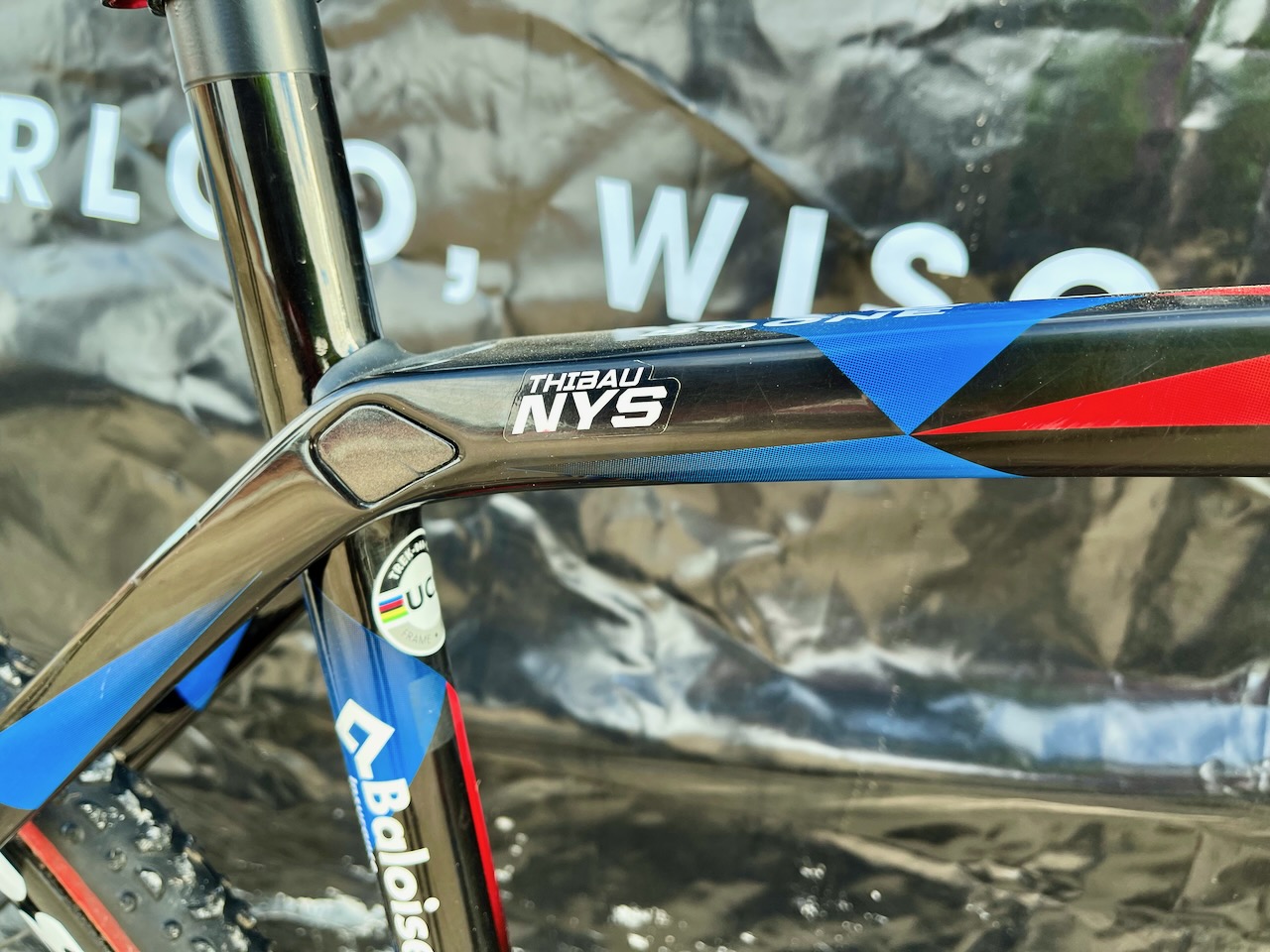 Overcoming injuries and pushing through challenges is part of the Nys way of life. Thibau and his father Sven work closely in training and life skills — something that has made the father/son duo so popular. The pair has their own reality show on Sporza, and Sven had a major motion picture around his final year of racing.

The Nys family was out in full effect for the world championships, riding laps together, talking with the Trek team staff in-between, and taking more photos with fans than I’ve ever witnessed at ‘cross race. 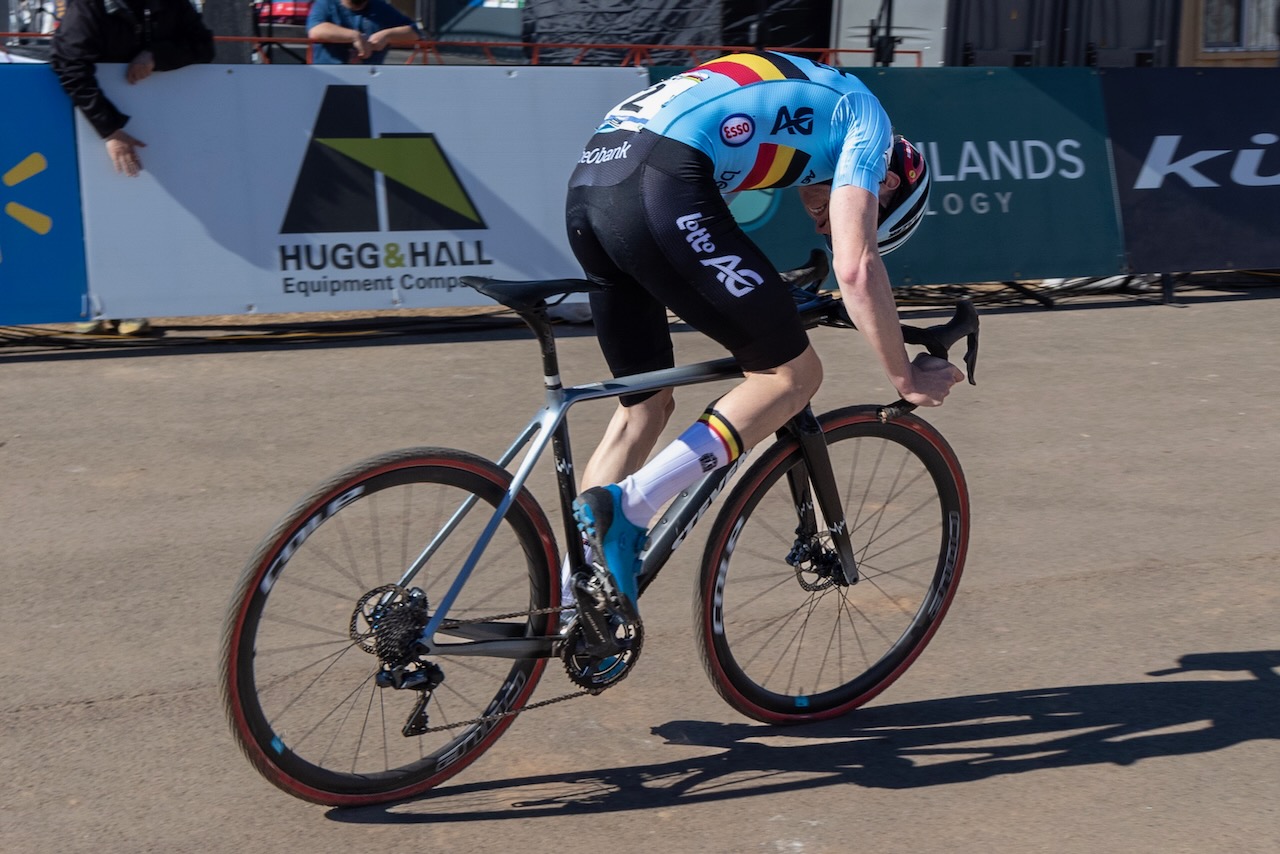 The U23 men’s race did not disappoint, with fast, furious attacks from the start. The race saw Joran Wyseure (Belgium) break away from the pack and maintain a steady yet blistering pace to secure the win. The chasing pack of Emiel Verstrynge (Belgium), Thibau Nys (Belgium), Mees Hendrikx (Netherlands), and Cameron Mason (Great Britain) made the race for the podium as exciting as the win. As it came down to the final lap, Emiel Verstrynge broke away and stayed clear, as the charging group of Nys, Hendrikx, and Mason sprinted for the bronze, with Nys taking the medal and rounding out a Belgian podium sweep. 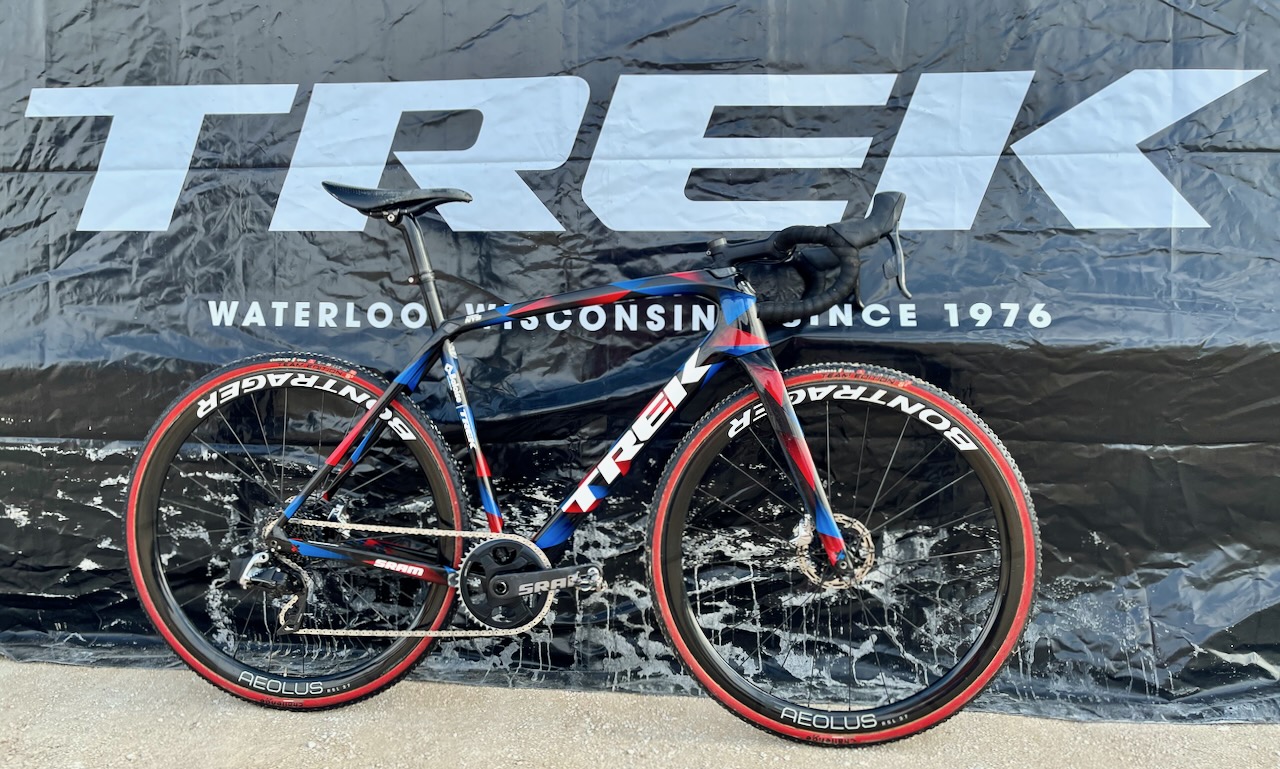 Thibaus’ Trek Boone looks strikingly similar to his father Sven’s, down to the Bontrager Serano Pro saddle, a mix of old school and new. The Serano Pro shape is classic (like the Selle Italia Turbo), but the materials are modern, plus it’s only available in a narrow 138mm width. 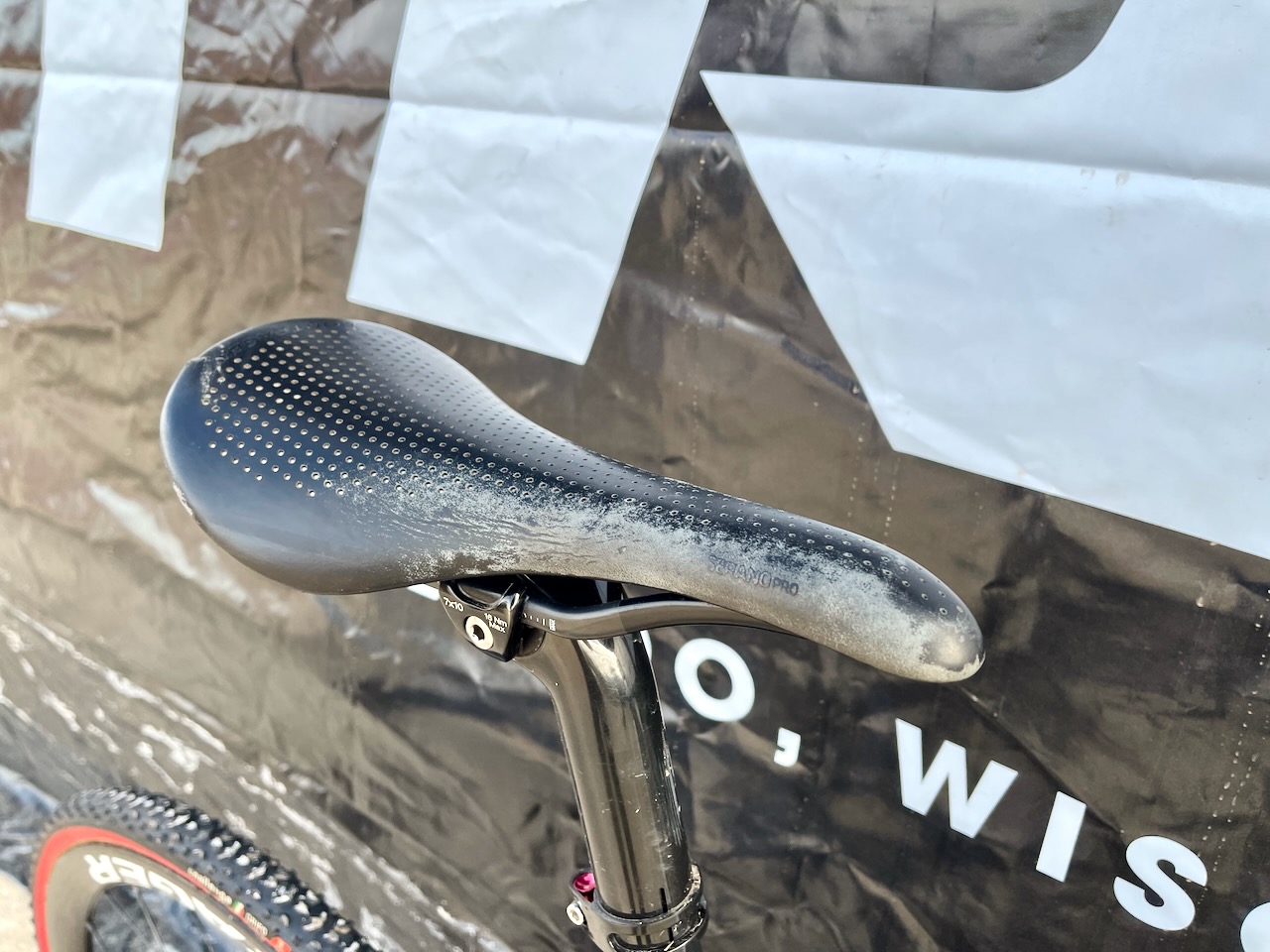 The frame is a 56cm Trek Boone with a custom Baloise Trek Lions paint scheme. The stickers and added flair come from vcgraphix, a popular graphics company for pro teams. The only real custom or upgraded frame detail is the super light Trek Emonda seat mast we noticed on Lucinda Brands’ bike. 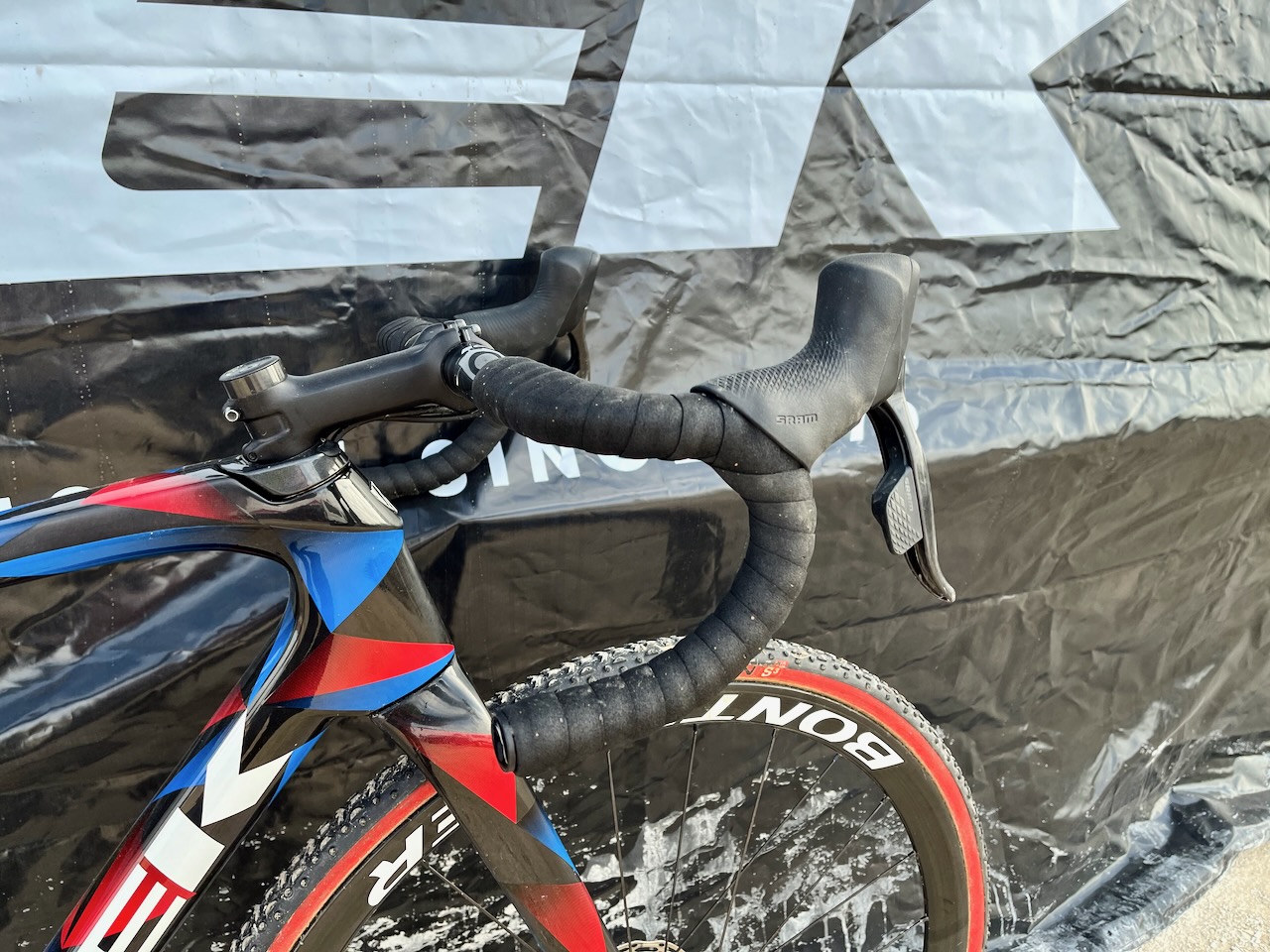 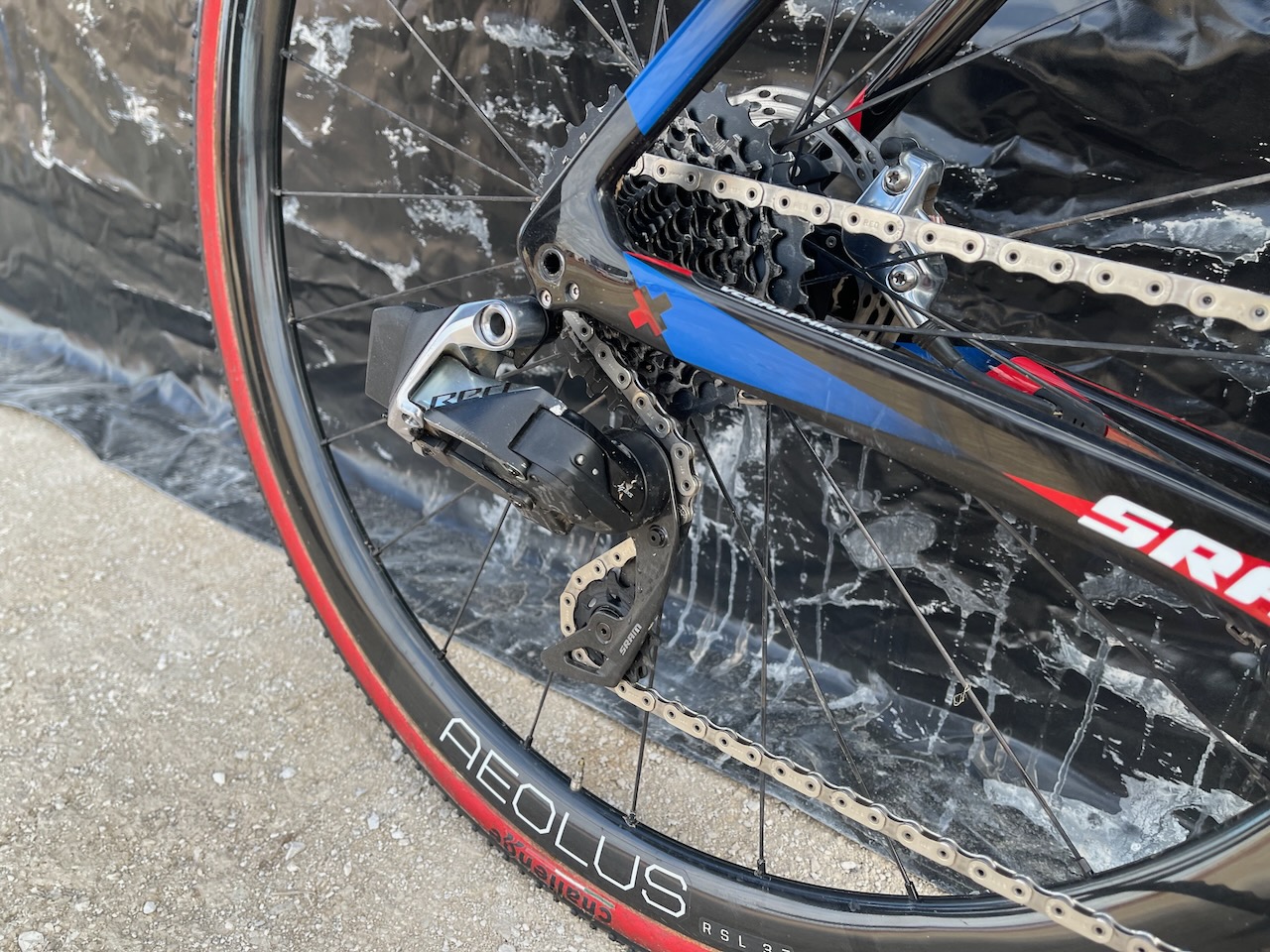 Like all of the Baloise Trek Lions crew, the shifting and braking bits are SRAM Red Etap. Thibau went with a 44T front ring and a 10-33t 12-speed cassette for the hilly but rolling Fayetteville worlds course. 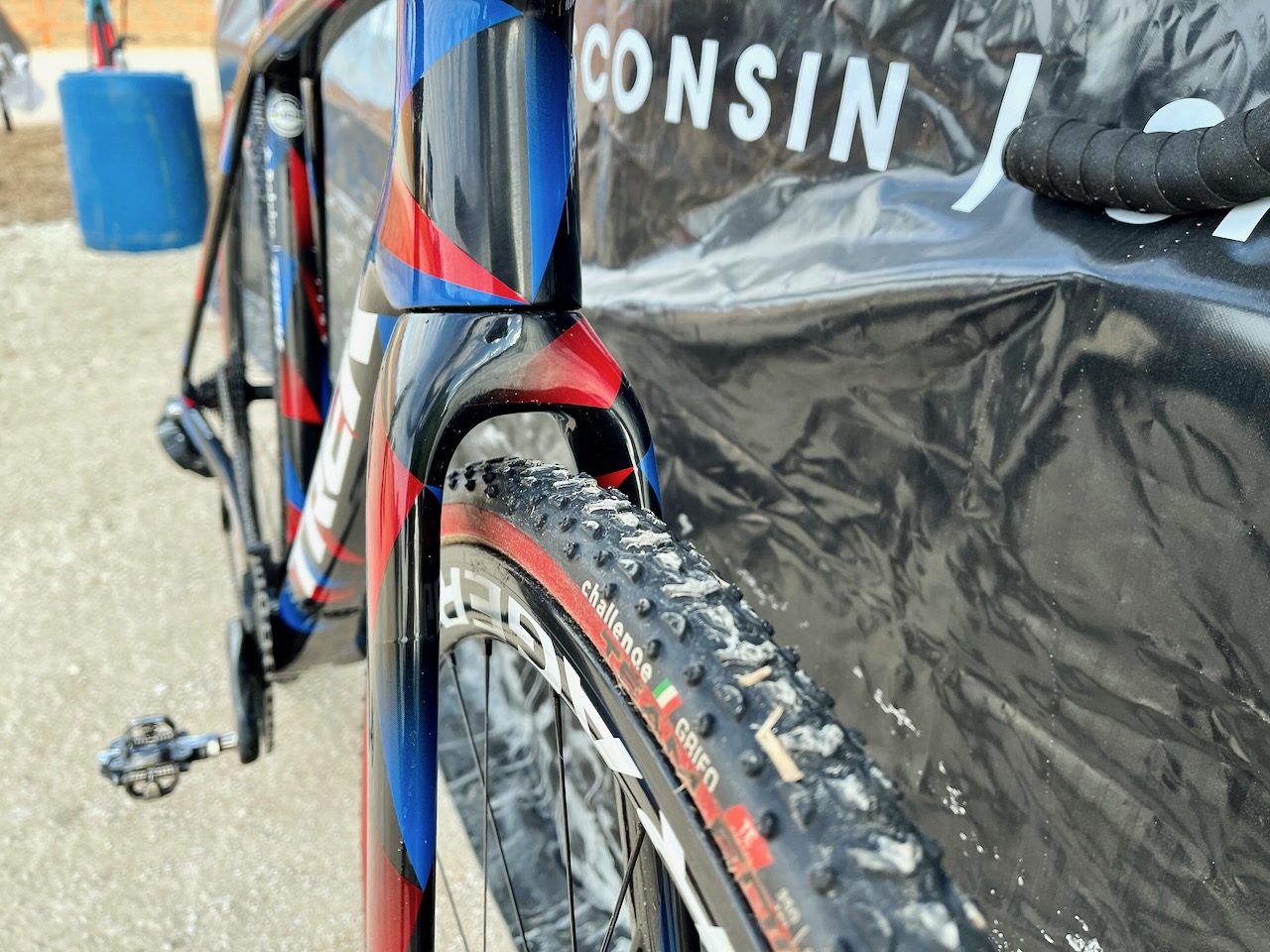 Thibau rides the same Bontrager Aeolus RSL 37 tubular wheelset as the rest of the team but opts for Challenge tires instead of Dugast. We saw Thibau on the easy-to-spot red sidewalls last season as well. Like most rides, Thibaus’ team went with a tried and true Grifo tread for Saturday’s event. Enough grip for the fast off-camber sessions and low rolling resistance on the pavement. 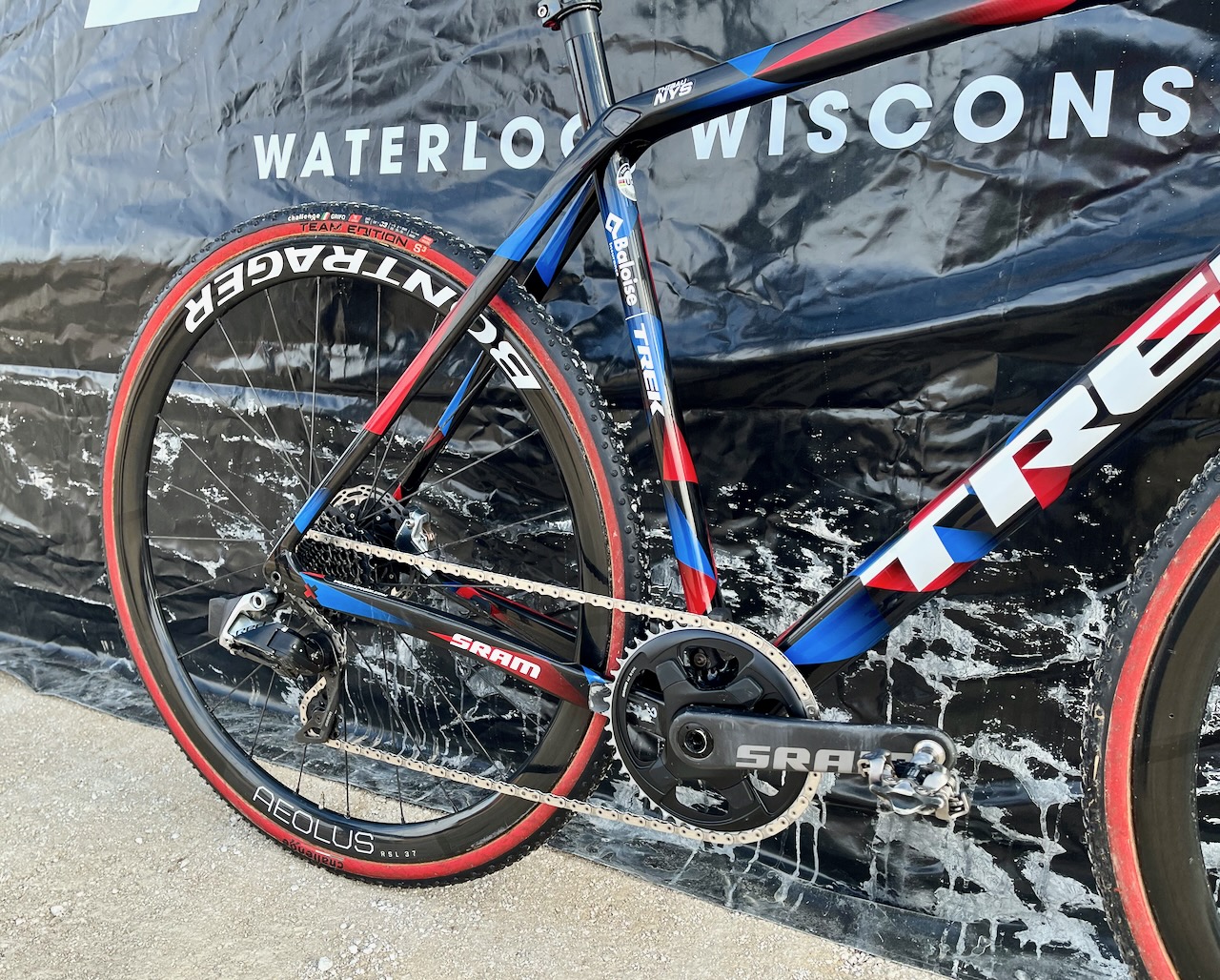