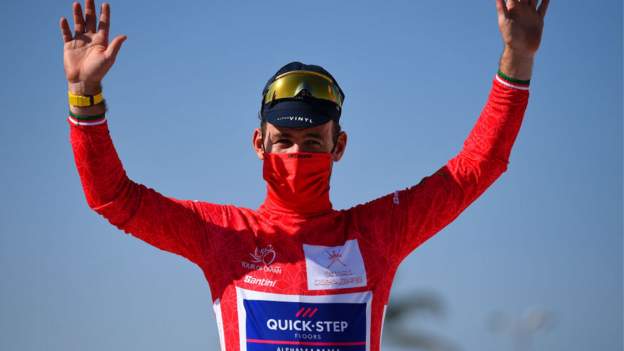 Sprinter Mark Cavendish won stage two of the Tour of Oman to take the overall lead from Fernando Gaviria and claim his first victory of 2022.

Cavendish edged Australia’s Kaden Groves at the end of the 167.5km stage from Naseem Park to Suhar Corniche.

“I was looking forward to this sprint, as it was similar to a Tour de France one, with a long finishing straight of over one kilometre,” Cavendish said.

“Everyone on the team was committed and did a great job.”

Cavendish opened his 2022 season with a second-placed finish behind Columbia’s Gaviria in the opening stage from Rustaq Fort to Muscat on Thursday.

“Coming into the stage I had a lot of confidence,” he added.

“When the sprint started, I was a bit far back, but I had a good speed and I’m happy with the way things panned out.”

With Belgium’s Amaury Capiot beating Gaviria to the final podium spot and bonus seconds applied, the win moves Cavendish into the overall lead before Saturday’s finish in Qurayyat.

Britain’s former world champion Cavendish is making his return to the road after a difficult 2021.

In November he suffered a collapsed lung and broken ribs in a crash, before suffering a traumatic assault when burglars broke into his home later that month.

“It’s only been a few weeks since I returned on my bike following that crash on the track so I’m quite satisfied with my form,” he added.

“To take a win so early in the season is always important – and we hope to get more nice results before the Tour of Oman ends.”