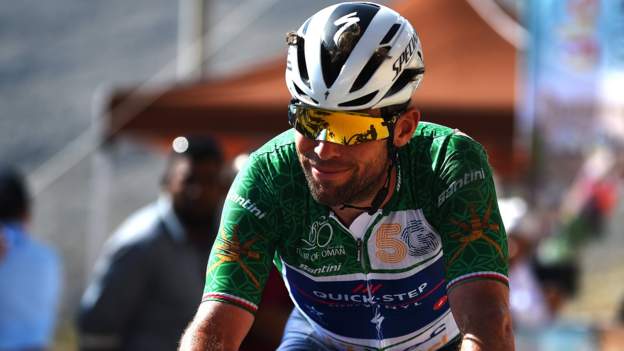 Mark Cavendish escaped with only grazes and bruises after a fall during the penultimate stage of the Tour of Oman on Monday.

It is the British rider’s first race since a high-speed track crash in Ghent in November saw him hospitalised.

“I had a touch of wheels and unfortunately I came down quite heavily,” said Cavendish.

Czech rider Jan Hirt won the stage after a summit finish and took the overall lead in the race.

Quick-Step Alpha Vinyl sprinter Cavendish added: “I am lucky that my injuries seem to not be too bad and I was able to get on my bike.”

Tuesday’s final stage is expected to be a sprint finish, giving the 36-year-old, who has 34 Tour de France stage wins, a chance of taking both the stage and the sprint points classification.

Cavendish won stage two of the race and was second on the first stage.

Intermarche-Wanty-Gobert rider Hirt broke away in the final two kilometres of the 150.5km stage which ended with a 5.7km climb up to the summit finish on Jabal Al Akhdar, known as the ‘Green Mountain’.

It was the 31-year-old’s first win since the 2016 Tour of Austria and he leads French rider Kevin Vauquelin, of Team Arkea-Samsic, by 39 seconds in the overall standings.