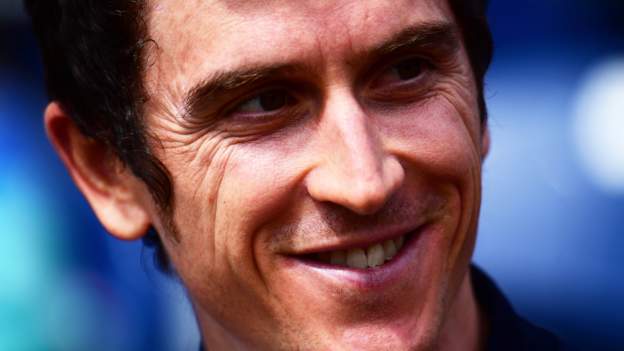 Former Tour de France champion Geraint Thomas says he is ready to show he can still be competitive as he starts 2022 with a new contract, a new coach and new motivation.

The Welshman begins his 16th season as a professional rider at the Volta ao Algarve in Portugal on Wednesday.

Thomas, 35, admits there is “less expectation” on him from his team this season – but he is keen to make a mark.

“In cycling now everyone talks about young guys,” he said.

Thomas signed a new two-year contract with Ineos Grenadiers in December, but it has not been the ideal winter of training.

His crash at last summer’s Tour de France led to shoulder surgery, which extended his off-season by three weeks.

Then over Christmas he caught Covid.

But having just returned from a training block in Los Angeles, and enjoying a different training plan under new coach Conor Taylor, Thomas says his “fitness is on the way up and the weight is on the way down” as he prepares to race at the five-stage Volta ao Algarve.

His new approach to training involves less emphasis on long, hard days and more focus on being fresh for the big efforts.

Thomas is hoping to be competitive across a variety of races this season, rather than targeting one Grand Tour as in previous years.

He will race the three Ardennes classics in April, before some shorter stage races, then the Tour de France and Commonwealth Games in the summer.

“There’s definitely less expectation within the team – when it comes to the Grand Tours anyway,” Thomas told BBC Sport Wales.

“But I’m still hoping to get to the Tour in the best shape possible. If I am in that shape, I don’t see why I can’t be competitive over the three weeks.

“But this year isn’t just all about one race. It’s about just enjoying racing my bike and going for the win in everything.”

Thomas’ efforts to win a second Tour de France last summer were ended with a crash that dislocated his shoulder.

Thomas could be forgiven for being a bit downbeat when asked about the last two seasons, which were blighted by crashes at the Giro d’Italia in 2020 and both the Tour de France and Tokyo Olympics last summer.

But he is only looking forward now.

“It is super disappointing,” he conceded, “but at the same time I’m not someone to just dwell on it.

“After a couple of weeks, you refocus, you find other goals and just try to be positive about it.

“Otherwise you’re just going to be a grumpy old man.

“Last year I still felt like I had a really good season up until the Tour – it was one of my best. Then what happened in the Tour was disappointing and the Olympics was the icing on a really terribly-made cake.

“You’ve just got to move on and keep striding forward – otherwise you won’t be in a good place.”

Ineos’ preparations for the upcoming season have been severely affected by Egan Bernal’s high-speed crash in Columbia, which the 25-year-old said could have killed him.

Thomas described news of the crash as “devastating” but he is pleased Bernal seems to be recovering well from surgery.

He is also fully aware that his own time in the sport is finite.

“I want to make the most of the next two, three, whatever it’s going to be years, and commit to it properly.

“Even if I don’t win anything, as long as I enjoy it and have a good time, that’s the main thing – and be happy and thankful for what I’ve done so far as well.

“I’m not sort of going into these last couple of years and just thinking I need to do X, Y and Z.

“It’s more get out there, train hard, race hard and then see what happens – and have fun doing it.”

While Thomas hopes for an attack on multiple fronts this season, one event is already in more than just back of his mind.

The Birmingham Commonwealth Games take place straight after the Tour de France and Thomas is hoping to race in the Welsh jersey again, having won road race gold at Glasgow 2014.

“It’s always a massive honour to race for Wales,” he said. “It’ll be third time I get to do it since 2006, so it’s a rare opportunity.

“I think the time trial could be a good chance [for a medal]. Then in the road race, hopefully we can work together well and do the nation proud.”

There may be less expectation this season, but for Thomas the motivation is as high as ever.