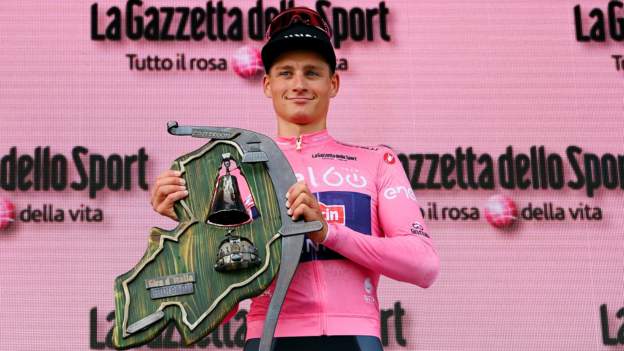 As a classics specialist who excels in punchy climbs, Alpecin-Fenix’s Van der Poel came into the first stage as favourite and won by a bike length.

Australian sprinter Ewan’s fall just metres from the finish line summed up a hectic conclusion to the 195km run from Budapest to the hilltop citadel at Visegard.

But Van der Poel timed his attack to perfection, coming from behind to edge out Girmay in four hours, 35 minutes and 28 seconds and take the pink jersey, after a stint in yellow at last year’s Tour de France.

“I knew positioning was going to be the key to the win today,” said Van der Poel, 27.

“It was quite difficult at times and I found myself boxed in and I had to use up a lot of energy to catch up with the guys in front.

“My legs were full of lactic at the end and it really hurt – but it’s incredible after the yellow jersey to wear the pink.”

After finishing second on the opening day of his first Grand Tour appearance, 22-year-old Girmay said: “I tried to do my best, I’ve never done a sprint like it. For 250-300 metres I am at the limit. I fully accept he was stronger than me today but I’m really happy.”

Mark Cavendish, back at the race after a nine-year absence, had said prior to the race he would not seek to contest this stage given the uphill finish, but the Quick Step-Alpha Vinyl rider was active in the intermediate sprint and picked up a handful of points.

The race continues with a 9.2km time trial in Budapest on Saturday, the second of three stages in Hungary before the race moves to Sicily next week.

General classification standings after stage one