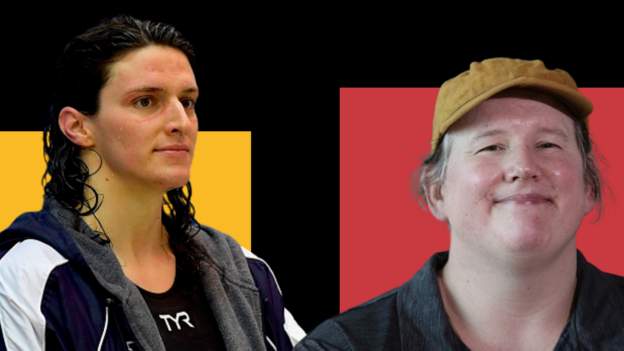 The British athletes, one of whom is an Olympian, believe athletes should only be allowed to compete in the category of their biological sex.

The debate centres around the balance of inclusion, sporting fairness and safety in women’s sport – essentially, whether trans women can compete in female categories without their biological sex giving them an unfair advantage or presenting a threat of injury to other competitors. The governing bodies of cycling and swimming are currently reviewing their transgender policies.

Many argue that transgender women should not compete in elite women’s sport because of the perceived advantages they retain, but others argue that sport should be more inclusive.

In recent months, the debate has transcended sport, even drawing comment from UK Prime Minister Boris Johnson who does not believe transgender women should compete in female sporting events.

The athletes who spoke to BBC podcast The Sports Desk have asked to remain anonymous for fear of social media backlash and losing sponsorship deals.

They were advised against speaking out by those closest to them – but felt they needed to “stand up”.

“I believe sport needs to be kept in sex categories,” said athlete A. “That’s the only way it remains fair.

Athlete B added: “Competition needs to be fair; it’s meaningful if it’s fair.

“We need to protect women’s sport.”

The debate around transgender athletes has recently focused on the case of transgender cyclist Emily Bridges.

In March, the 21-year-old was ruled ineligible to compete in her first elite women’s race by the Union Cycliste Internationale (UCI), cycling’s world governing body. The process to rule on Bridges’ eligibility to race in international competitions is continuing, while British Cycling has suspended its transgender policy.

Bridges began hormone therapy last year as part of her gender dysphoria treatment and has now become eligible to compete in women’s events because of lowered levels of testosterone.

She said she had been “harassed and demonised” after being told she could not compete.

Last year, New Zealand weightlifter Laurel Hubbard became the first openly transgender athlete to compete at an Olympic Games in a different sex category to that in which they were born, while in March, American Lia Thomas became the first known transgender swimmer to win the highest US national college title.

“I think by trying to have inclusion it actually excludes who the category is for,” said athlete A.

“The female category was made because women wouldn’t get a look in if they played male sport.

“We have seen at the Olympics last year trans women being included in the female category, and that then takes away an opportunity for one woman to be called an Olympian, and that is something we all dream of.”

Athlete B said: “We’ve made great strides in encouraging women into sport.

“This is actually excluding more women from sport and it will slowly turn around so then we won’t have a female category any more, but it will be just taken over by trans women who are biologically male.”

However, this is disputed by sports scientist Joanna Harper, who is transgender herself. She told BBC Sport that “trans women will never take over women’s sport”.

“The NCAA 11 years ago allowed trans women to compete, based on hormone therapy. We should be seeing 1,000-2,000, but we see a handful every year.

“So 11 years after these hormone therapy-based rules went into effect, trans women are not taking over NCAA sports. They are still hugely under-represented.”

Both athletes say transgender athletes are welcome in elite sport and do not want to see anyone deterred from participating at any level, but add that it is a common belief among other female athletes that transgender women should not compete in women’s sport.

“I haven’t actually spoken to another athlete that doesn’t feel the way I feel,” said athlete A. “Every single female athlete I’ve spoken to is scared to speak out.”

In April, a letter signed by a group of elite female cyclists – including retired Olympians, scientists and researchers – called on the UCI to “rescind” its rules around transgender participation and testosterone levels and implement eligibility criteria for women “based on female biological characteristics”.

The letter – referring to the Bridges situation – said there was “deep regret” at the “crisis situation”, claiming female athletes in the UK “have shown they were willing to boycott” in order for the UCI and British Cycling “to hear their concerns about fairness in their sport”.

The letter included the signature of Sara Symington, head of Olympic and Paralympic programmes at British Cycling.

Later that month, Olympic cycling gold medallist Katie Archibald – who did not sign the letter – said she felt “let down” by the International Olympic Committee’s stance that there should be no assumption that a transgender athlete automatically has an unfair advantage in female events.

“I read this and hear my world titles, Olympic medals and the champions jerseys I have at home were all won in a category of people who simply don’t try as hard as the men,” she said.

World Athletics president Lord Coe has warned that the integrity and future of women’s sport is “very fragile”.

What is the IOC’s view?

The International Olympic Committee’s framework on transgender athletes – released in November – states that there should be no assumption that a transgender athlete automatically has an unfair advantage in female sporting events.

It places responsibility on individual federations to determine eligibility criteria in their sport, but does not require transgender women to suppress testosterone levels in order to compete in female events.

However, this latest guidance has been criticised from many corners, with the athletes speaking to BBC Sport saying it is “not clear”, “very vague” and “problematic”.

The IOC’s head of human rights Magali Martowicz told BBC Sport: “It has always been the responsibility of federations to set their own eligibility criteria. This has not changed.

“The previous approach that we were recommending to have a set threshold of testosterone was no longer sustainable and we had to really rethink how to ensure inclusion and pathway for inclusion for transgender athletes, and those with sex variation, as well as of course maintaining the fairness of competition.

“One of the key things that came out strongly is that it has to be looked at on a sport-by-sport basis, that’s one of the key outcomes of the consultation.

“There is nothing in the framework that suggests that you cannot exclude someone. What the framework says is that federation has to truly understand what constitutes a disproportionate advantage, and to do that it has to be based on a thorough review of the science, but also other considerations, as laid out in the framework.

“If indeed on a case-by-case basis a person has demonstrated a disproportionate advantage, there is nothing in the framework that says she has to compete at all costs.

“So it’s not that we are favouring inclusion over fairness, it’s really trying to balance the two but having a process that allows for a fair process for all athletes in that category.”

One of the athletes on the other side of the debate is transgender British racing driver Charlie Martin.

Since her transition, the 40-year-old says she has lost physical strength and muscle mass, but says the focus on the perceived advantages that transgender women hold overlooks the “physical variation” among all athletes.

“You look at people like Ian Thorpe, the swimmer – he had size 17 feet and hands to match, he basically had four flippers on the end of his limbs,” she told BBC Sport.

“The guy won gold medals and did anyone turn round to say ‘well, that’s not fair, he’s got a massive advantage’?

“You look at Nims Purja, the guy that just climbed the 14 highest mountains in the world. They put him on an oxygen machine on a bike and found that he has this incredible ability to keep going when he has virtually no oxygen coming into his lungs.

“I’m sure if you look into sport there are people out there who have these advantages which people celebrate. Yet as soon as we look at transgender women, it’s like a completely different set of rules and that to me feels like blatant discrimination.”

Like Harper, Martin disputes the view that transgender women would come to dominate women’s sport.

“I just wish people would try to understand what a lived trans experience is like, and then really try to understand this argument that’s aimed at trans women that they’re trying to ruin female sport. No-one wants that,” she said.

“Trans women just want to go out, live a life and play sport like anyone else. Whether you’re a professional athlete – of which there are very, very few trans people in the world who are at that level – or whether you’re just someone who wants to go and play football at your local club or go use your local swimming pool.

“It’s just creating a very toxic environment for trans people to try and step into when it’s so easy for people to withdraw from sport in the first place. And we all know, as people who are into sport and love sport, we know the benefits. It plays such a massive positive role in people’s lives and to take that away from people is criminal.”

Some women have also backed the inclusion of transgender athletes. Following the backlash against Thomas’ 500-yard freestyle NCAA win in March, US Olympic silver medallist Erica Sullivan – who competed against Thomas – said she was “proud to support” her.

Writing in Newsweek at the time, Sullivan said: “Like anyone else in this sport, Lia has trained diligently to get to where she is and has followed all of the rules and guidelines put before her.

“As a woman in sports, I can tell you that I know what the real threats to women’s sports are: sexual abuse and harassment, unequal pay and resources and a lack of women in leadership.”