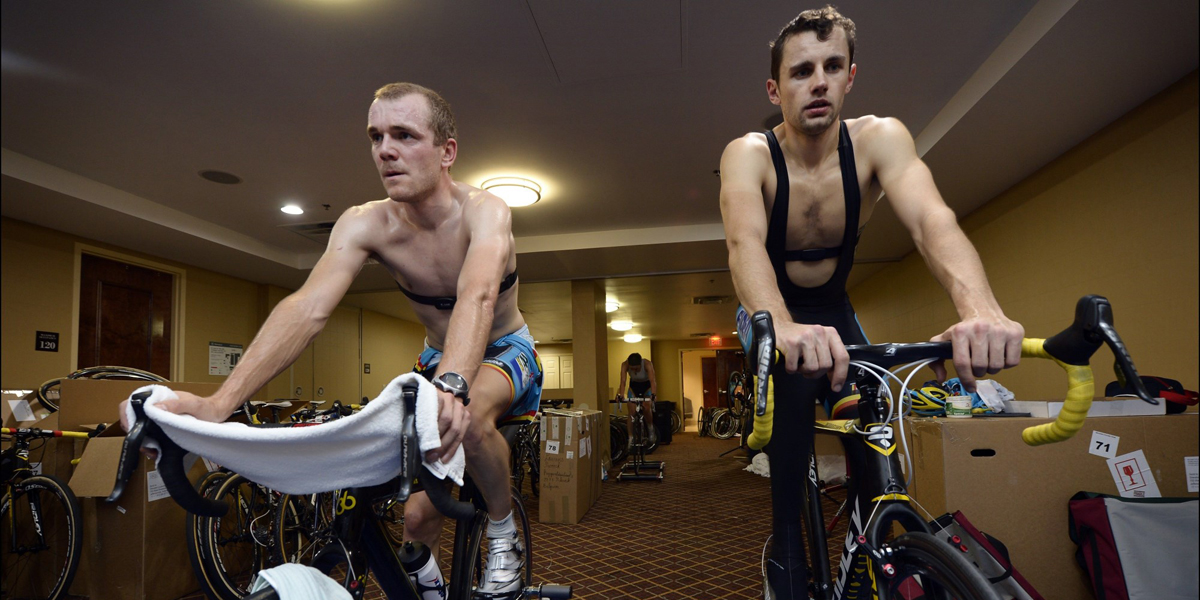 Much research has gone into studying both the physiological benefits from heat adaptation along with the practicalities of getting heat adapted. However, can a heat camp blunt your training adaptations? 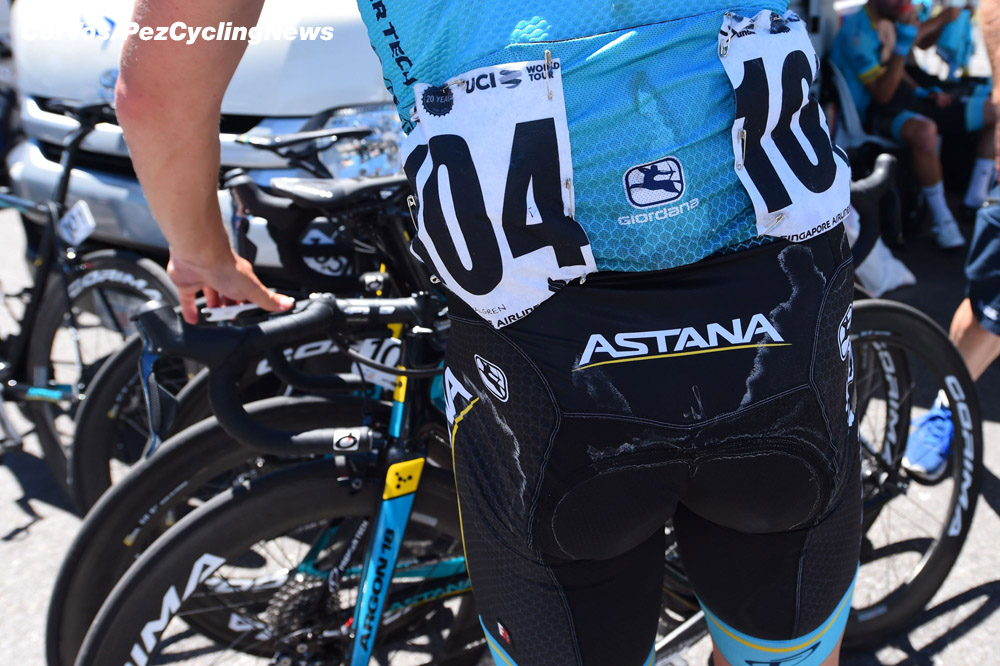 A sweaty day for this Astana rider Down Under

In 2016, I co-authored a meta-analysis surveying >90 studies on the physiological changes and performance benefits from heat adaptation in terms of exercise in the heat. We’re now preparing an update, with at least another 2 dozen relevant new papers in the past 6 years. In brief, if you know you’re competing in the heat, nothing you do (e.g., precooling, ice vests, ice socks, etc.) is nearly as important as making sure you’re properly heat adapted first.

At the same time, while the data is conflicting, there’s also a proposal that the benefits of heat adaptation (e.g., higher plasma volume, lower resting core temperature, etc.) can also benefit performance in cooler environments.

Slivka and colleagues came out with a very interesting paper in 2021, asking whether you can optimize both heat training AND training adaptations at the same time. Basically, getting hot and bothered is a stress on the body, so does this additional stress blunt your body’s ability to benefit from training?

We know that heat acclimation is critical for competing in hot weather, and might even help improve performance in cooler temperatures. But could heat training actually reduce your long-term aerobic fitness gains?

In today’s episode, we’ll explore a study of three weeks training in either neutral or hot conditions, and see whether the two groups improve equally in overall aerobic fitness or key cellular responses typically found after a bout of exercise.

Heat adaptation – done through training at relatively low to moderate intensities in hot climates – in important for athletes getting ready to compete in hot environments. Doing so reduces heart rate and core temperature, increases sweating rates and evaporative cooling, and reduces thermal discomfort. Some argue that even if you are competing in moderate temperatures, being heat adapted can provide an advantage by increasing your aerobic capacity and maybe even the amount of hemoglobin, the molecule responsible for carrying oxygen in the blood. The challenge for athletes comes in finding time for a heat camp in an already busy training and competition schedule. Surprisingly, despite more than a half century of heat adaptation research, the question of whether a heat camp actually impairs your aerobic training has not really been addressed until recently.

In a 2021 study, Slivka had untrained young males train for three weeks. One group did so in neutral conditions of 20°C and 40% relative humidity. A second group training in hot conditions of 33°C and 40% relative humidity. 14 one hour steady cycling sessions were done, with the participants asked to ride at a rating of perceived exertion of 15 or ‘hard.’ Basing effort on perceived effort automatically allowed the workload to increase as the participants became either more fit or heat adapted. Before and after the three weeks, a test ride of 60 minutes at the same effort was done, and muscle samples were taken before and 4 hours after the ride. One key measure they looked at was PGC1-alpha, a gene that is turned on after training and that may be critical in building mitochondria, the aerobic powerhouse of cells.

What happened with the two groups before and after the three weeks? On the left we see the results of VO2max, or the maximal oxygen that the body could use. Both the neutral and hot groups had similar VO2max before training at about 38 mL/kg/min. What was interesting was that VO2max increased by about 10% in the neutral group, about what we would expect in this untrained group and with this type of training. However, the hot group did NOT increase their VO2max after three weeks, suggesting that their response to training was blunted by training in the heat. On the right we see the response of PGC1-alpha. Before the three weeks of training, the neutral group had a 6.6x increase in PGC1-alpha after the 60 minutes of exercise, much higher than the 4.6x increase in the hot group. No difference between groups was found after the three weeks, with about a 2.4x increase in PGC1-alpha. It’s possible that this lower initial response may mean less building of mitochondria, which might explain the lower aerobic fitness after three weeks in the hot group.

This study is really intriguing in being one of the few to see whether heat training can blunt aerobic training, and we really need more followup work. For example, would we see the same responses in elite athletes compared to the untrained participants in this study? But if true, this has serious implications for athletes and coaches building a training schedule. It suggests that, while heat training may be an important tool, it is NOT possible to have a heat training camp that optimizes both heat adaptation AND training itself. Instead, we need to recognize that training itself will take a back seat during these camps, and needs to be made up elsewhere in the schedule. 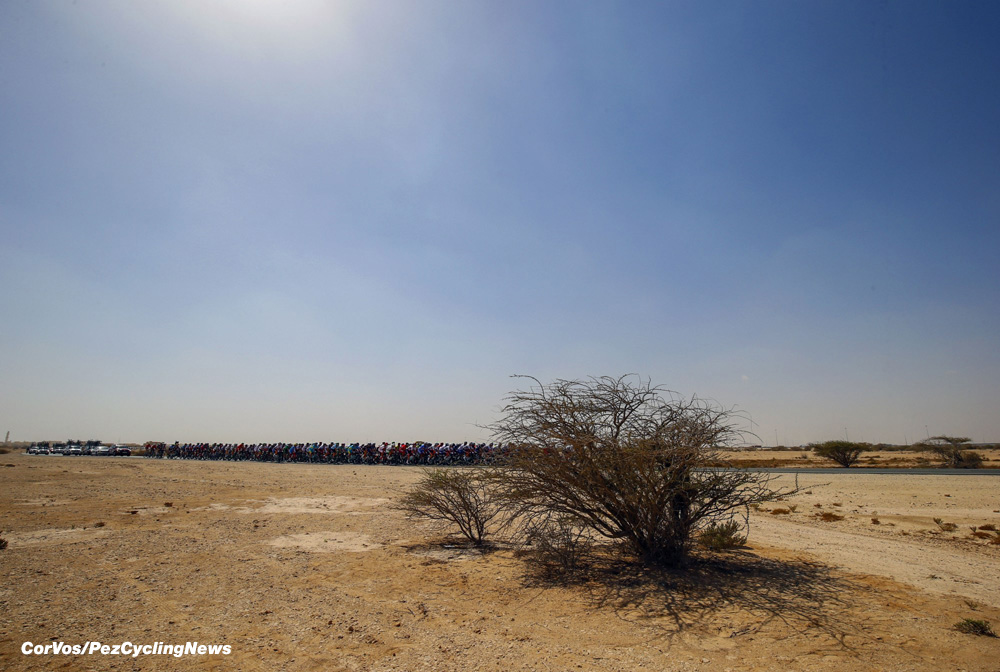